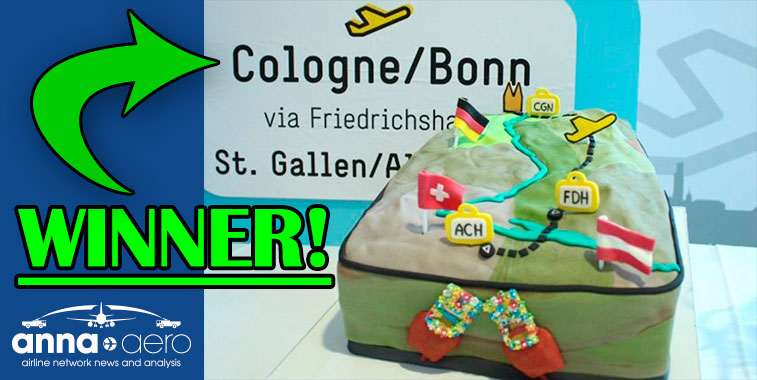 When we do these competitions I always allow myself two votes per week – one for Cake of the Week and one for the Fire Truck Water Arch. This was the cake I voted for, baked by those clever people at Cologne Bonn Airport for the launch of the People’s Viennaline domestic service from Friedrichshafen (and Altenrhein in Switzerland), which won by over 250 votes (not one thankfully).

With 37% of the vote, (the same as last week’s winner London Stansted in Part I) Cologne Bonn has snaffled-up the W16/17 Cake of the Week Public Vote Part II, winning by a substantial margin of 250. Securing a healthy 15% of the vote was just not enough for second-placed Gran Canaria, and it also looks like there was a titanic tussle for the runners’ up spot. Less than 40 votes split second, third and fourth places, so the outcome could have been very different for Bratislava or Frankfurt, had they been able to muster 50 more votes. Every cake received at least one nomination, however the top five commanded 81% of the votes cast. As well as the outcome of the cake competition, we have the FTWAs Part II results too. That’s it until next March/April, when the Public Votes will open again for the S17 route launches, so get your chef’s thinking caps on to come-up with a world-beating sweet treat next year.