Iberia, Oslo Gardermoen, Manchester and Singapore all celebrate their industry-recognised anna.aero Route of the Week awards 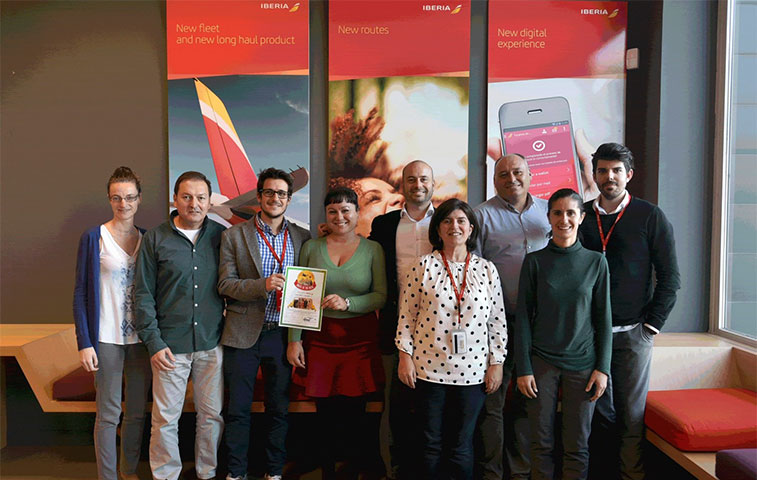 Recently anna.aero awarded Iberia with the Route of the Week title for its newest long-haul connection, a link from Madrid to Tokyo Narita. The airline last served the route over 18 years ago. Seen celebrating with the award are Cristina Casajús, Luis Alonso, Jorge Jiménez, Alicia Abascal, Antonio Linares, Mª Ángeles González, David Sánchez, Ana Belén Prieto and Pedro Galilea who all work in Iberia’s Network and Alliances Department. 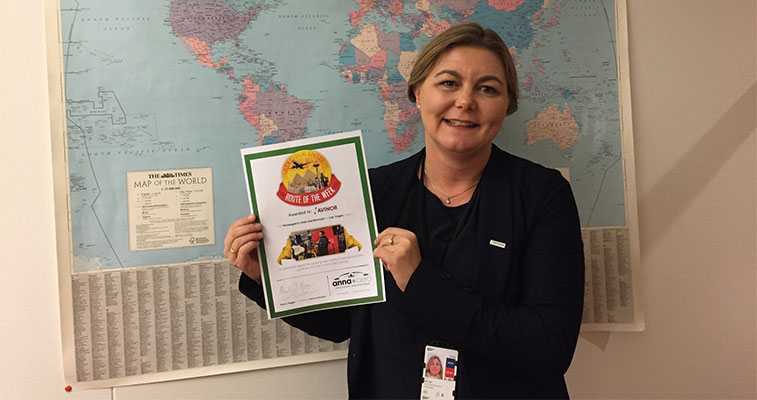 Oslo Gardermoen celebrated with its Route of the Week award this week, having been handed the title for Norwegian’s latest long-haul connection to Las Vegas from the Norwegian capital. Showcasing the airport’s award is Charlotte Malling, Director Traffic Development, Avinor Oslo Airport. 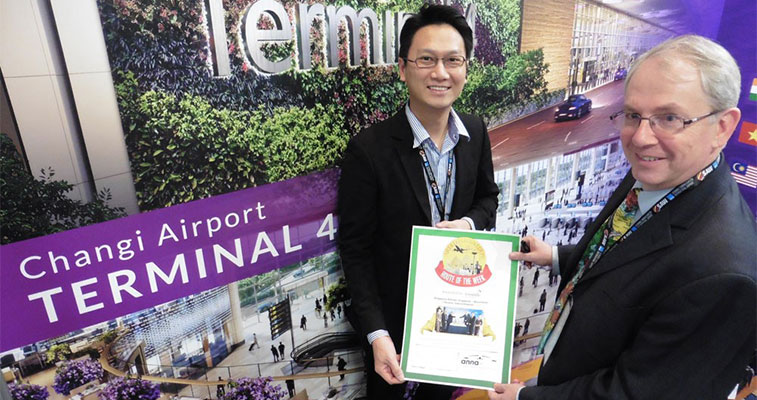 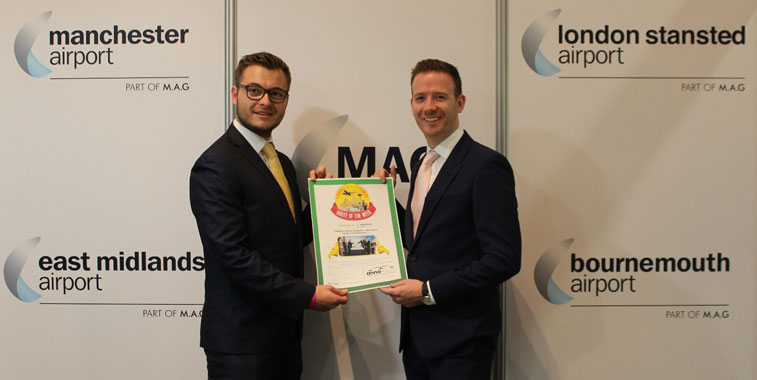 Also receiving its Route of the Week award in Atlanta was Manchester Airport, with Singapore Airlines linking Manchester to the airline’s hub non-stop for the first time since 2008, while also bringing to the UK airport a brand new long-haul connection in the form of Houston Intercontinental. Jonathan Ford, Assistant Editor of anna.aero, is seen presenting the Route of the Week title to Robert Smith, Business Development Manager, Manchester Airport. On 29 October Lufthansa commenced flights between its Frankfurt hub and Funchal in Madeira. The weekly (Saturdays) 2,834-kilometre A321-operated sector is already served by Condor, which offers a weekly (Thursdays) rotation on A320s according to OAG schedules. To celebrate the Lufthansa link, which will open up greater connectivity to the world via its Frankfurt hub, the airport commissioned a beer and pretzel-inspired cake, with passengers also receiving a small bottle of Madeira wine and flowers. For the first time in its 78-year history, Manchester Airport has welcomed over 25 million passengers within a 12-month period. Not only this, but the airport also celebrated achieving 31 months of consecutive growth. Collette Roche, Deputy CEO of Manchester Airport, said: “We are really pleased to have hit this significant milestone and look forward to continuing to grow our passenger numbers. At a time when capacity in the South is constrained, we are adding more passengers and routes than ever before. In the last year alone we have launched flights to Houston, Beijing and Boston, to name a few, all of which can only be found at Manchester outside of London. This underpins the role we play in the North as the global entry point of the Northern Powerhouse and as economic provider and job creator.” The 25 millionth passenger was Thomas Cook Airlines customer Chris Stenson, from Crosby, Liverpool, who received a wealth of prizes when he arrived for his flight to New York JFK. On the accolade he said: “I am absolutely delighted to be Manchester Airport’s 25 millionth passenger and what an incredible start to my flight to New York with Thomas Cook.” Also on hand to celebrate the achievement at the airline’s check-in counters were Manchester Airport’s Deputy CEO, Collette Roche, and Thomas Cook Airlines CEO, Christoph Debus. 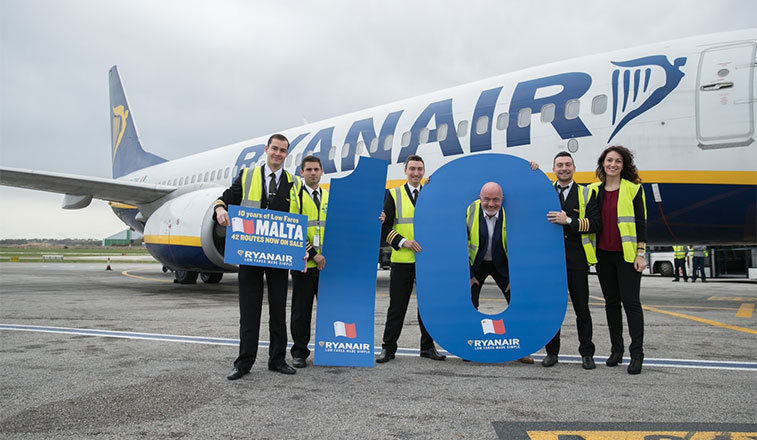 On 15 November, Ryanair celebrated its 10-year anniversary of flights to Malta. Since launching operations to the Mediterranean island in 2006, Ryanair has carried over eight million passengers from Malta. For S17, the airline is currently planning to offer 42 routes from Malta, including new summer services to Brussels, Catania, Nuremberg, Toulouse, Valencia and Vilnius. On hand to celebrate the milestone in Malta was Ryanair’s CCO David O’Brien. On 3 November Volotea celebrated the milestone of carrying one million passengers from Bordeaux, an airport it has been operating to since 2012. In 2016 Volotea will have operated more than 3,900 flights with over 491,000 seats available. In 2017, Volotea will increase the number of seats on offer by 23% to reach a total of nearly 605,000. The number of flights will also increase by 7%, totalling more than 4,200 flights for 2017. On the day of the celebration, the airline also announced a new route to Malta that will be launching in April, while flights to Gran Canaria and Fuerteventura will begin in December. Seen cutting the four-tiered cake that was baked to celebrate the milestone are Pascal Personne, President of Bordeaux-Mérignac Airport, and Lázaro Ros, MD of Volotea. After cutting the cake, Personne then joined the airport’s Jean-Luc Poiroux, VP Business Development, and Catherine Caraglio, Head of Route Development for a celebratory picture with a cardboard cut-out of one of Volotea’s 717s. Wow…wow….wow!! It took 1,574 eggs, 90 kilos of cake flour and four kilos of baking-powder to bake this bad boy which weighs roughly half a ton, and looks uncannily like the fresh-from-the-factory 737-800 which will land at Durban Airport in a fortnight to be based there. On 28 October the South African airport unveiled, cut and shared this four-by-four-metre cake. It’s an ultra-realistic replica, made by Paul Vieira and his team at Cake Extreme to celebrate the 20-year anniversary of the franchise partnership between British Airways and Comair. It’s BA’s longest relationship of this sort and is celebrated in the same year that Comair celebrates 70 years of profitable, uninterrupted operation in Southern Africa. The cake’s designation is ZS-ZWH, the same as the latest acquisition in Comair’s fleet upgrade programme which, says Comair CEO Erik Venter, is a sign of the airline’s confidence in the region’s air travel sector, the airline’s sound business model and its partnerships. “That’s why we believe that our partnership with BA is worth celebrating and celebrating in style,” commented Venter. The ingredients for this cake include: 1,574 eggs, weighing 52.5kg; 90kg of cake flour; 60kg of white sugar; 4.5kg of baking powder; 45 litres of cooking oil; 30 litres of water; 0.5 litres of vanilla essence; 30kg of white margarine; 20kg of icing sugar; 50kg of butter cream; and 80kg of colour fondant to cover this entire cake.