Lille-Rome is “Skyscanner Unserved Route of the Week” with 25,000 annual searches; will Vueling or HOP! jump to it? 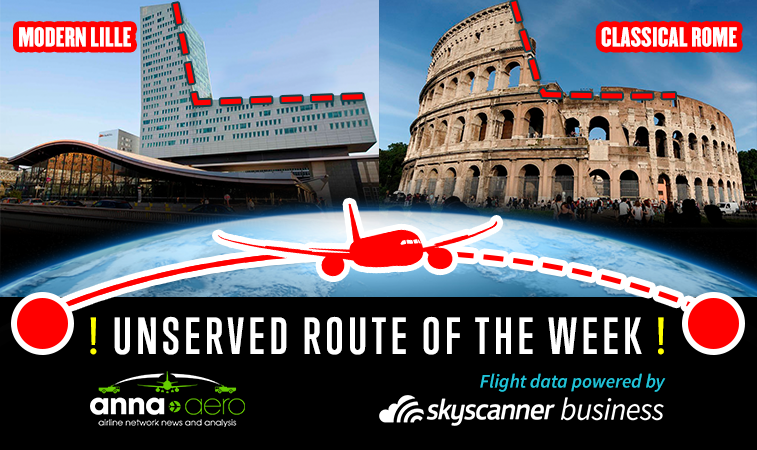 Why in “L” is this route unserved? With 25,000 annual Skyscanner searches a twice-weekly Lille-Rome service should be immediately viable for an airline like Vueling or HOP! (but probably mainly Vueling).

With nearly 25,000 searches in the last year, a potential new route from Lille to Rome has been identified as this week’s “Skyscanner for Business-anna.aero Unserved Route of Week” – a powerful analysis based on aspirational data captured from the Skyscanner.net flight comparison site used by +50 million unique visitors per month. “Rome is among the most desired unserved routes from Lille,” says Pierre Fernemont, Aéroport de Lille’s Marketing & Development Manager. “Both for business and leisure, the Northern French market is showing significant demand for flights to the Italian capital.” 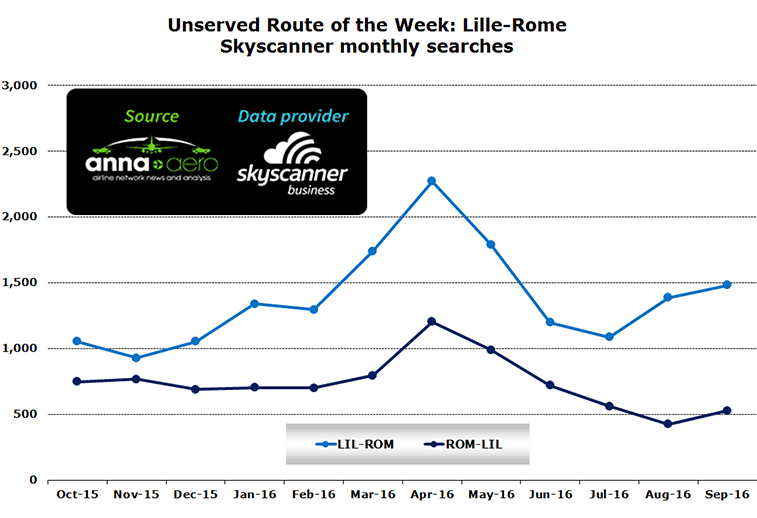 With Skyscanner demand on this route showing a clear bias in favour of the French end, a 65/35 split, the potential carriers at Lille were therefore considered first. Air France carrier, and SkyTeam affiliate, HOP! is currently the largest airline (54% seat share) at Lille in terms of weekly capacity, according to OAG data for the week commencing 15 November. Looking at this week’s schedules, the regional airline presently operates seven routes from the airport, all of which are to domestic destinations ‒ Bordeaux (18 weekly), Marseille (18), Toulouse (18), Lyon (17), Nantes (16), Strasbourg (12) and Nice (seven). This makes it the sixth-largest base for the airline in terms of weekly seats, behind Lyon, Nantes, Toulouse, Marseille and Bordeaux. So clearly HOP! has little current experience of the international market from Lille which it can utilise should it consider a Rome operation. However, it does fly to Rome Fiumicino from Lyon (five times weekly) and Bordeaux (three). It does also have a reasonable presence in the France-Italy country pair as, in addition to the routes above, it flies services from Lyon to Bologna (17 times weekly), Milan Malpensa (16), Venice Marco Polo (12) and Florence (two), as well as six times weekly from Nantes to Malpensa, giving it a total of 61 weekly frequencies between the two nations. On this basis, a new route from Lille to the Italian capital is therefore not out of the question for HOP!

Other possible airlines at French regional airport to operate this route include #2 carrier easyJet (27% share), especially as it does presently fly to Italy from Lille, a four times weekly service to its second biggest base at Malpensa. The remainder of its services at the airport are either domestic (Nice, Toulouse and Bordeaux) or to Switzerland (Geneva) or Portugal (Lisbon). So the LCC does at least have some experience in the Italian market from Lille, however the S15 closure of its Fiuimicino base is a barrier to easyJet beginning a service, as the airport, despite having a network of 12 destinations in S16 (15 in W15/16), now operates as a spoke (it is still the airport’s fourth largest carrier in terms of weekly seats) rather than a hub for the airline these days.

Contemplating Rome end of the route, the potential carriers at the at the city’s main airport of Rome Fiumicino were considered first. As expected, the national carrier and another SkyTeam member, Alitalia, is currently the largest airline (45% share) in terms of weekly capacity. The airline, which is Italy’s second largest carrier in terms of weekly seats behind Ryanair, presently operates to four French destinations from its biggest hub – to Paris CDG (35 times weekly), Nice (14), Marseille (11) and Toulouse (seven). So it would seem not unreasonable that SkyTeam carrier could consider a service to Lille. However, there are bigger French regional airports which it might think about first, like Lyon and Bordeaux – although HOP! already flies from these cities to Rome. Ryanair also flies to Bordeaux from Rome Ciampino, while Nantes-Fiumicino is a sector operated by Vueling twice-weekly. As such, the IAG-owned carrier may believe it has a better chance of operating a viable Lille-Rome service than Alitalia does. Meanwhile, this does mean that Lille is the biggest French regional/non-Paris airport (in 2015 passenger throughput terms) without a service to Rome.

Taking a look at Rome Fiumicino’s second and third largest airlines based on weekly seats, both are LCCs. Ryanair is the #2 carrier at the airport (8.5% share), while Vueling is number #3 (7.0% share). Both carriers do serve the French market from Rome, with Ryanair offering a six-times weekly operation to Marseille. However, Vueling’s presence in the French market from Fiumicino is more robust, flying to Paris Orly (16 times weekly), Lyon, Marseille, Nantes and Nice (all twice-weekly). So, once again, the LCC could be considered as a strong potential operator between Rome and Lille, with few other carriers having a route development strategy better aligned to serving this market at the moment.

Ryanair’s has a breathtaking 91% market share at Ciampino of the two carrier’s using the airport. It does fly to France from the secondary Rome airport, providing a 12 times weekly service to Paris Beauvais and twice-weekly to Bordeaux. So perhaps the Irish ULCC may consider a Lille connection from either Roman airport to complement its existing French capacity. Ryanair is also an existing operator at Lille, albeit on a small scale, with a thrice-weekly route to Marseille, which is another reason why it should be giving some serious consideration to the potential sector.

Just to conclude the Italian end of the proposed route, Wizz Air (#2 carrier with a 9% seat share) has a network of nine destinations from Ciampino (Bucharest, Cluj-Napoca, Prague, Timisoara, Craiova, Iasi, Katowice, Chisinau and Targu Mures). However, these are predominantly inbound markets from Eastern Europe, and are operated with no aircraft based at Rome. On that basis, a Lille service would require a change in the ULCC’s strategy from Ciampino before such a sector could be considered, particularly as it operates no city pairs into France at this time.

When looking at the previous year of search data, the busiest month for potential traffic flows (for both directions on the route combined) is April 2016, with nearly 3,500 searches, over 1,700 higher than the lowest monthly figure, which was recorded in November 2015 (1,700 searches). The seasonality profile of this search data is less extreme than the last Unserved Route of the Week (Bristol to Zurich) with the low-month traffic representing 49% of the highest month. According to OAG Traffic Analyser, because there is no direct service, the top three connecting options chosen by those passengers who did book travel between Lille and Rome in the past year indicates that the majority of connecting passengers use the rather eclectic selection of Barcelona (18%), Nice (17%) and Bordeaux (14%). Only 13 airports were used by transfer passengers over the past year.

Indeed, an O&D that is not served by a non-stop flight will typically display a low purchase rate and low traffic. In this instance Skyscanner’s Travel Insight indicates a monthly average of 1.8% for the Lille to Rome route (see graph below). Therefore, if there was a Lille to Rome route, and if bookings performed in line with the “Skyscanner market average” for direct services at both airports (5.1%), the airline operating this route could immediately expect an improved purchase rate of 183%, without any increased marketing spend. However, with 25,000 annual searches a twice-weekly service should be immediately viable for the airline selecting to start this potential city pair. “Italy is identified as one of the fastest-growing and biggest potential markets for Lille. Rome is, of course, on top of our Italian hot list, and we’re ready to discuss this project with any airline that will be confident on this lovely long-term route,” concludes Fernemont. 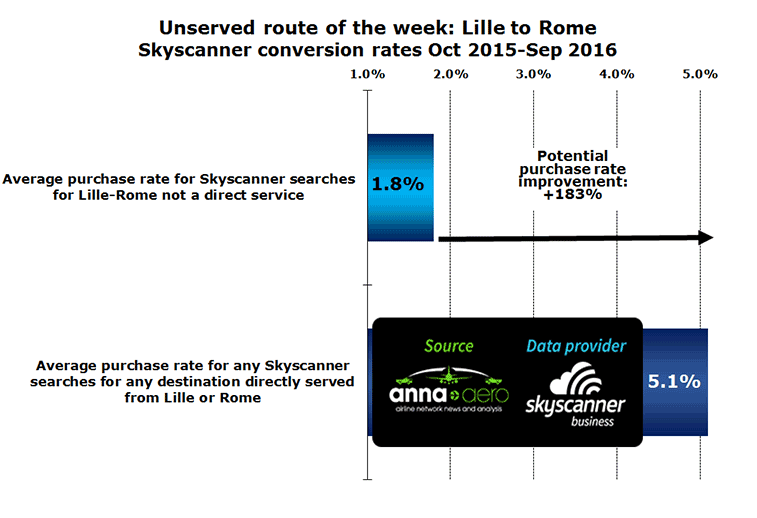