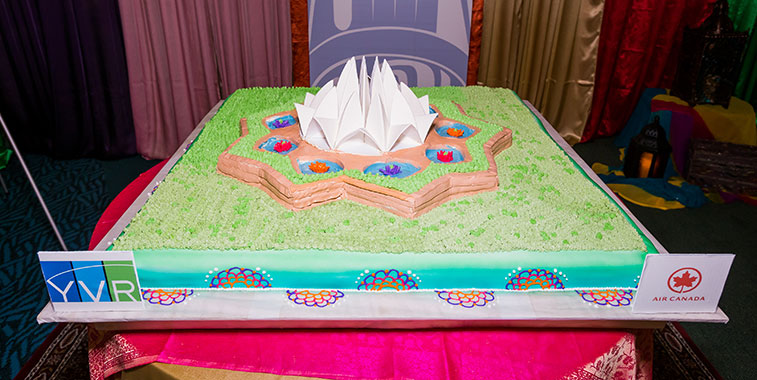 Air Canada recently celebrated the launch of flights to Delhi from Vancouver with this fantastic Lotus Temple-inspired cake. The seasonal link to the Indian capital is one of two new long-haul routes inaugurated by Air Canada this year, with the other being Brisbane. New long-haul connections with Air Canada’s mainline division from Vancouver next summer include Frankfurt and Taipei Taoyuan.

Vancouver Airport is Air Canada’s second largest operation after Toronto Pearson, with the British Columbia airport accommodating a little over 11% of the airline’s seat capacity in 2016. The Star Alliance member has heavily expanded from the airport in recent times, with its capacity growth this year being the highest recorded during the past decade. Taking just Air Canada’s mainline operation on its own, its seat capacity from Vancouver has risen by 18% during the past 12 months, while in the previous nine years the average yearly growth rate was -0.9%. 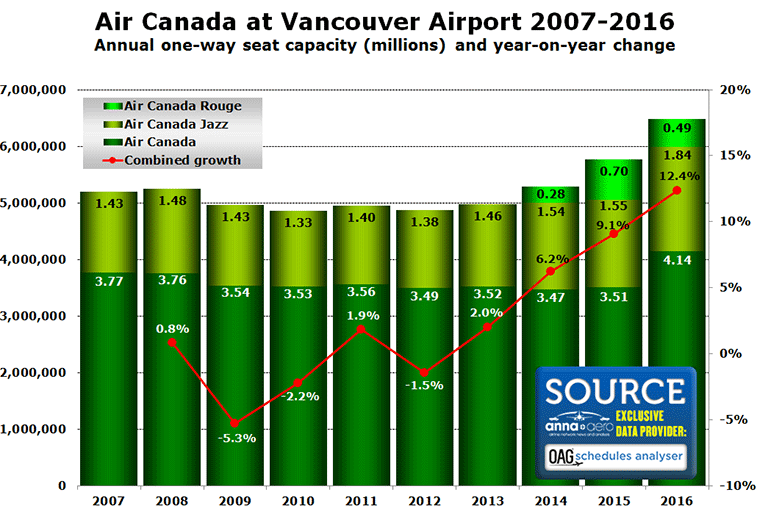 If we take all Air Canada operations into account (including Jazz and Rouge), then overall the company has grown by just over 12% during the past year. The only decline within the group this year comes from Rouge, with its capacity from Vancouver down over 30%. In relation to seats, 2016 is the first year in recent times to see capacity pass six million one-way seats, with mainline itself offering over four million one-way seats.

Air Canada in its strongest position for a decade

By taking a look at Air Canada’s market share from Vancouver, we can see that it has remained consistent during the past decade. Overall mainline’s share of capacity at Vancouver has dropped from 33% in 2007 to just under 30% this year, however its has managed to gain back two-points in the past 12 months. Air Canada Jazz has recorded its best share in 2016, with it occupying above 13% of Vancouver’s seat capacity, the same it achieved in 2009. Looking at the collective group of Air Canada carriers, they occupy just under 47% of Vancouver’s seat capacity in 2016, the first time that the three airlines have passed 46% in the past decade. 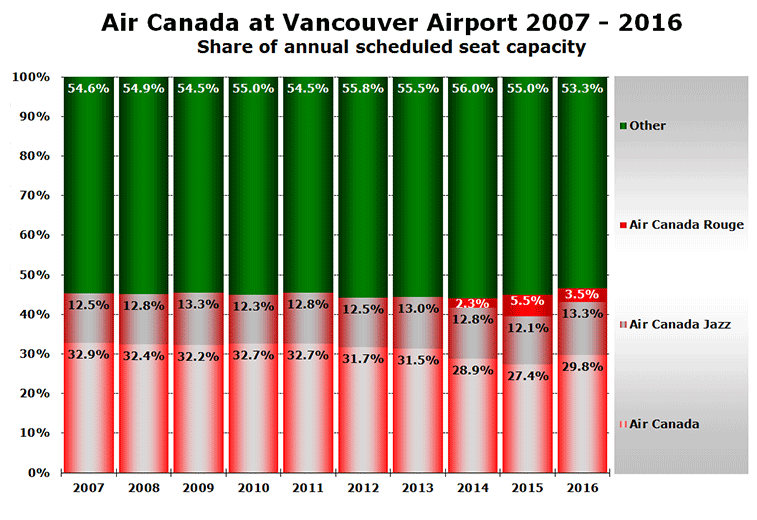 This winter Air Canada, along with Jazz and Rouge, will serve 48 destinations from Vancouver, an increase of seven when compared to W15/16. Air Canada has inaugurated two new long-haul routes from Vancouver during the past 12 months – Brisbane and Delhi. However, other seasonal long-haul routes have also been launched. Rouge added flights to Dublin in June, while the carrier has also added Cancún and San Diego to its Vancouver network. In relation to mainline, short-haul routes to Chicago O’Hare and San Jose have commenced this year.

Toronto Pearson is number one

The largest route for Air Canada from Vancouver is the link to Toronto Pearson, with the 3,344-kilometre sector occupying over 16% of the airline’s overall departing seat capacity from its second largest airport. Capacity on the city pairing has risen 7.8% during the past 12 months. However, the best performing top 12 route when it comes to growth is Montreal, with seat capacity to Canada’s second largest city up 27% when compared to last winter. 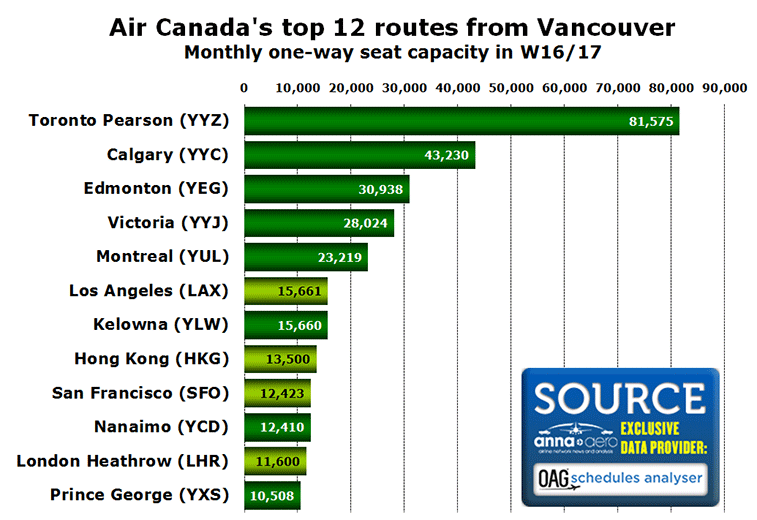 As can be seen from the graph above, four of Air Canada’s top 12 routes from Vancouver are international destinations (highlighted in light green). Of these four destinations, the best performing in relation to growth is Hong Kong, with capacity to the Asian hub up 13% when compared to the same time last year. With this impressive double-digit growth, and London Heathrow seeing its capacity drop 2.6% in the same period, it means that Hong Kong is the largest long-haul route from Vancouver for Air Canada.

Frankfurt and London Gatwick to join the party

Earlier this month it was announced that for S17 Air Canada would add Frankfurt and London Gatwick to its Vancouver route map. From 1 June the airline will link Vancouver to Frankfurt with a daily 787-8 service. “Air Canada continues to strategically increase its European flights at Vancouver with seasonal daily flights to Frankfurt next summer and three times weekly flights to London Gatwick,” said Benjamin Smith, Air Canada President, Passenger Airlines. “The addition of our flights to Frankfurt, one of Europe’s most important hubs, offers customers a wide array of convenient choices and the ease of one-stop connections with our Star Alliance partner Lufthansa when travelling to southern, central and eastern Europe as well as Africa, the Middle East and beyond.” It should be noted that fellow Star member Lufthansa already links Frankfurt to Vancouver. Services to Gatwick will be operated by Rouge and will be inaugurated on 8 June. As well as these two additions, other routes confirmed for next summer from Vancouver include Dallas/Fort Worth, Nagoya (Rouge operation) and Taipei Taoyuan. For next summer, OAG schedules currently show that Air Canada will be operating 53 routes from Vancouver, up five compared to this year. However final schedules for next year are still to be finalised. 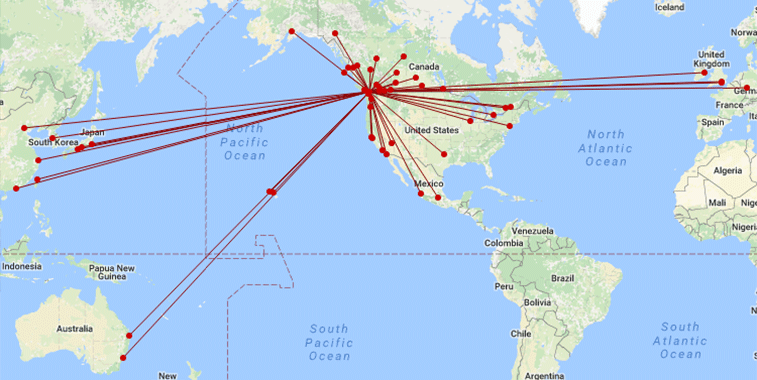 For S17 Air Canada currently has 53 routes filed for operation, including new links to Dallas/Fort Worth, Frankfurt, London Gatwick, Nagoya and Taipei Taoyuan. The airline’s new link to Delhi is currently only operating during the winter season.