Funchal Airport traffic up 13.4% for the first three quarters of 2016; on course for three million; Lufthansa arrival opens global connectivity 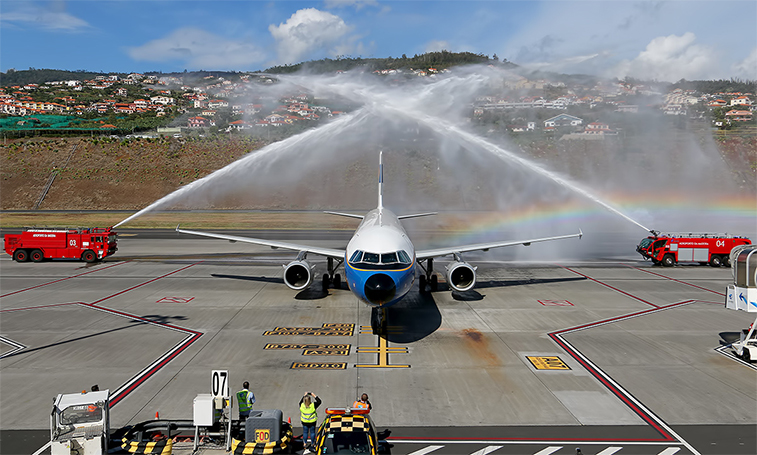 Lufthansa returned to Funchal on 29 October, launching a weekly (Saturdays) A321-operated 2,834-kilometre link from Frankfurt, with the airline using its retro livery aircraft on the inaugural service. The launch marked the end of a three-year hiatus by the carrier at the Portuguese airport, with it having last served Funchal in November 2013 with weekly flights from Berlin Tegel and Düsseldorf.

The island of Madeira is served by Funchal Airport, the fourth largest airport in Portugal after Lisbon (20.1 million passengers in 2015), Porto (8.1m) and Faro (6.4m). Funchal welcomed just over 2.6 million passengers in 2015, up 5.9% on the 2014 total. According to latest estimates, Madeira has a population of around 289,000, with 111,000 of those inhabitants living in Funchal, the island’s capital. According to Eurostat, Madeira is the second richest region in Portugal by GDP per capita, with it only being beaten by the capital, Lisbon. One of the main industries for Madeira is tourism, with this sector contributing to 20% of the region’s GDP. Madeira currently welcomes just over one million tourists per year.

On course for three million

So far this year (January to September), Funchal has welcomed just shy of 2.3 million passengers, with the traffic for that period up by over 13% when compared to last year. The best performing month for growth was May, where traffic was up 23% when measured against the same month of 2015. The month with the lowest growth was August, with traffic still up a respectable 8.8%. August however was the first month in recent history which has seen Funchal welcome 300,000+ passengers, with it beating the milestone by 17,131. If Funchal continues to see an average monthly growth rate of just over 13% for the remainder of 2016, then it can expect to welcome over 2.95 million passengers. Nonetheless, if growth forecasts climb to around 14%, the airport could pass the three million passenger barrier. 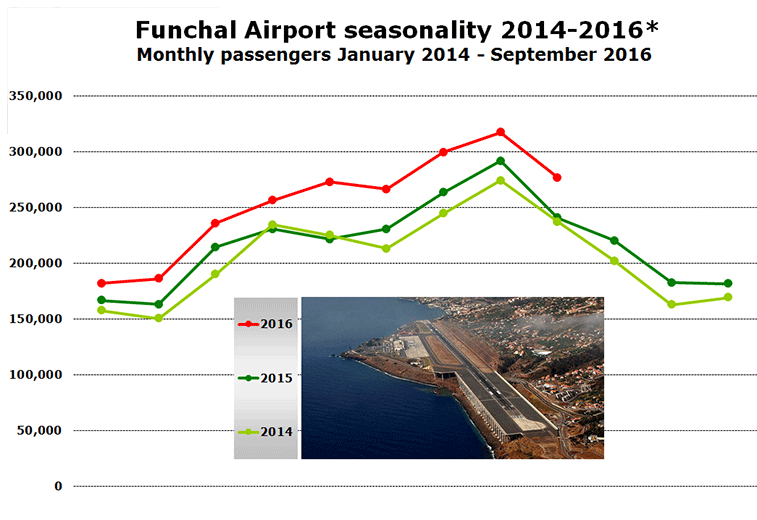 Lisbon top in summer and winter 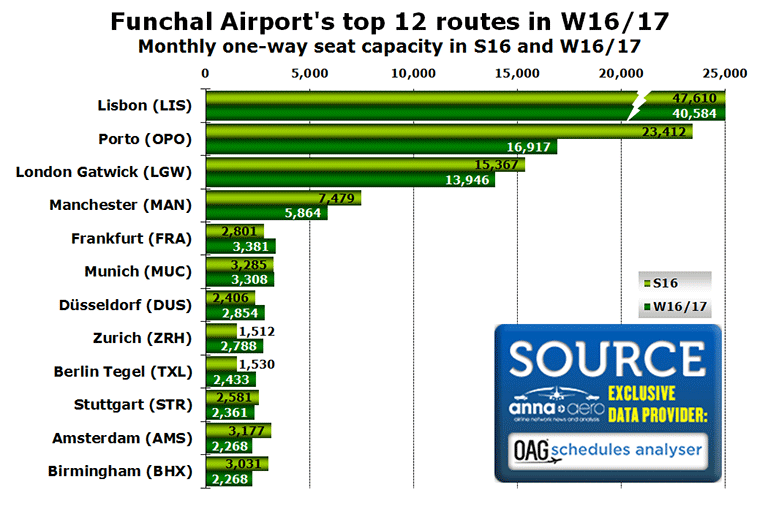 The routes listed above are the top 12 routes for the winter season, however three of these routes were not in the top 12 for S16. Düsseldorf (13th largest route in summer), Zurich (27th) and Berlin Tegel (25th) replace Madrid (not served in winter; fifth largest route in summer), Gran Canaria (32nd in winter; 10th) and Brussels (34th; 11th) in the top 12 routes for the winter season.

During S16 Funchal was connected to 43 destinations, while it is linked to 39 this winter. Routes that were operated this summer but are not this winter include: Madrid, East Midlands, Prague, Barcelona, Bilbao, Lanzarote, Tenerife North, Basel, Jersey and Faro. Routes that are served this winter, but not in summer are: Stockholm Arlanda, Nuremberg, Copenhagen, Bremen, Friedrichshafen, Dresden and Riga.

Of Funchal’s top 12 airlines, Iberia (ninth largest airline in S16) is the only one that does not operate to the airport year-round, but just offers summer services from Bilbao and Madrid. This summer, Funchal was served by 28 carriers, however six of those airlines only operate from the island of Madeira on a summer-only basis. Iberia, Binter Canarias, SmartWings, NIKI, Corendon Dutch Airlines and Austrian Airlines all flew from Funchal in S16, but are absent this winter. However, there are five airlines that operate from Funchal in just the winter season according to OAG schedules, they are: Norwegian, Thomas Cook Airlines Scandinavia, Lufthansa (new carrier), TUIfly Nordic and Danish Air Transport. When it comes to destinations, Condor is the most seasonal, with it operating six routes in summer, but only two in winter. 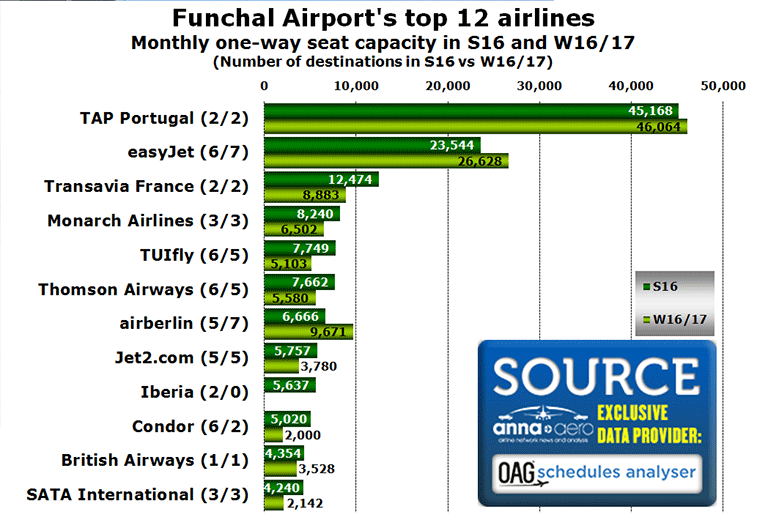 On 29 October, Funchal welcomed the return of Lufthansa and its new weekly (Saturdays) service from Frankfurt. The return of Lufthansa marked a near three-year hiatus by the carrier at Funchal, with it having last served the island of Madeira in November 2013, the month it ended weekly flights from Berlin Tegel and Düsseldorf. The connection also opens up global connectivity to the island, with the only other hub carriers being TAP Portugal (Lisbon), Iberia (seasonal – Madrid), Finnair (Helsinki) and British Airways (London Gatwick).

The number one unserved route from Funchal is London Heathrow, with around 16,400 passengers making the connection between November 2015 and October 2016, with Lisbon being the number one connection point with 82% of traffic. Along with Heathrow, London Stansted also makes it into the top 10, however a non-stop connection to the UK capital’s third largest airport will begin on 3 April when Jet2.com, Funchal’s eighth largest airline, opens a base at Stansted. The one unserved connection that stands out from the rest is Johannesburg (fifth largest unserved market) as it is the only long-haul link. However, the remaining routes could feasibly be served by a carrier in the airport’s current airline line-up. 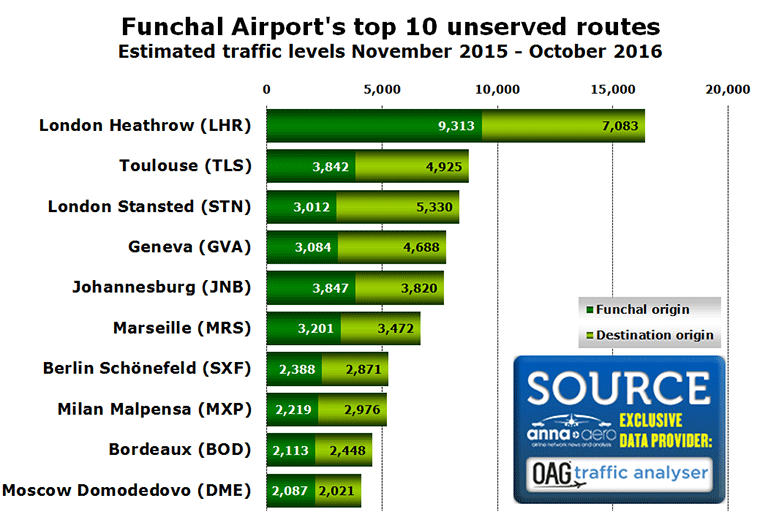 For the current winter season, the only planned route scheduled to commence from Funchal is with easyJet to Basel, a destination that is currently operated on a summer-only basis with TUIfly. easyJet will link the Swiss city to Funchal with a weekly (Tuesdays) flight from 6 December. From 1 April next year, Funchal will welcome the arrival of Brussels Airlines with a weekly (Saturdays) A319-operated route from Brussels, joining TUIfly and Thomas Cook Airlines Belgium on the route. Also in the pipeline for next year from Funchal is expansion from UK airline Jet2.com, which is planning routes from Stansted (begins 3 April), Birmingham (2 October) and Edinburgh (30 October). 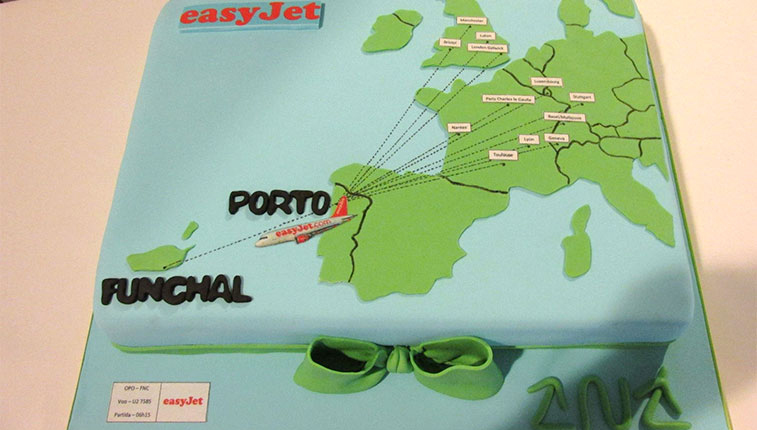 easyJet on 20 May added a new link between Porto and Funchal, the airline’s sixth route to the island of Madeira, with the former airport celebrating the inauguration with this cake. From 6 December, the airline will add a weekly (Tuesdays) route from Basel to Funchal. As well as these routes, the carrier also links Funchal to Bristol, Edinburgh, Lisbon, London Gatwick and Manchester.