Adelaide-Nadi is “Skyscanner Unserved Route of the Week” with 35,000 annual searches; Fiji Airways’ next Australian foray?? 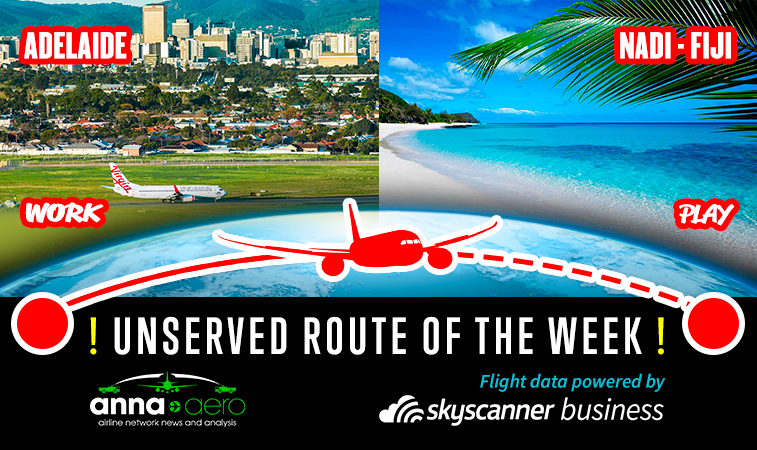 The Aussies love Fiji and Virgin Australia already flies there from Sydney, Brisbane, and Melbourne and 35,000 Skyscanner searches is easily enough for a three times weekly frequency, although demand for an actually available route would be stacks higher.

With nearly 35,000 searches in the last year, a potential new route from Adelaide to Nadi in Fiji has been identified as this week’s “Skyscanner for Business-anna.aero Unserved Route of Week” – a powerful analysis based on aspirational data captured from the Skyscanner.net flight comparison site used by +50 million unique visitors per month. “Adelaide is overdue for another international leisure route and Fiji would be the ideal destination. Fiji is one of Adelaide’s top unserved markets and the potential of a direct connection between Adelaide and Nadi is significant,” says Jonathan Cheong, Head of Aviation Business Development at Adelaide Airport. Of course, Adelaide was also recently announced as the host city for World Routes 2019 – the first host city from Australasia. 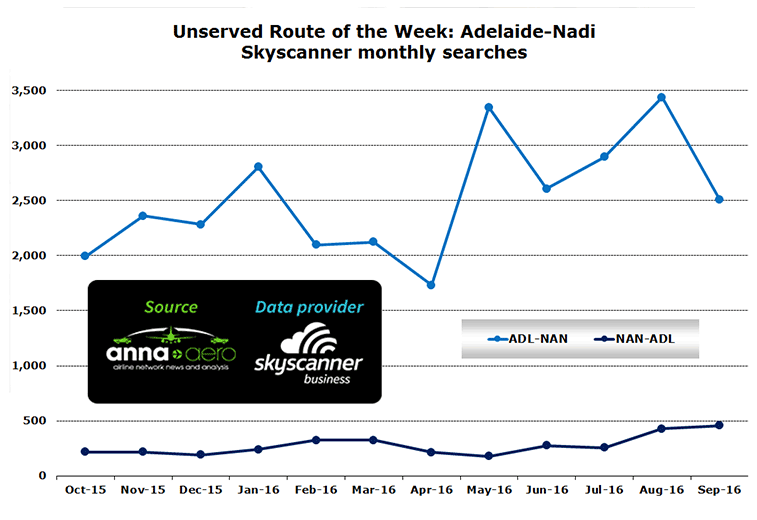 With Skyscanner demand on this route showing a massive bias in favour of the Australian end, a 90/10 split, the potential carriers at Adelaide were therefore considered first. National carrier Qantas is currently the largest airline (36% seat share) at Adelaide in terms of weekly capacity, according to OAG data for the week commencing 21 November. Referring to this week’s schedules Qantas operates nine routes from the airport, all of which are to domestic destinations ‒ Melbourne (68 weekly), Sydney (61), Brisbane (29), Perth (25), Port Lincoln (25), Whyalla (13) Canberra (11), Darwin (seven) and Alice Springs (seven). This makes it the fifth-largest Qantas base for in terms of weekly seats, behind Sydney, Melbourne, Brisbane and Perth. So clearly Qantas has little current experience of the international market from Adelaide which it can use, should it consider adding Nadi to its network. Indeed, it does not currently fly to Fiji from any Australian airport. Services to this part of the world are presently flown by in-house Qantas LCC Jetstar Airways – also the #3 airline at Adelaide – and indeed it does operate to Nadi from Sydney (four times weekly) and from Gold Coast (three). On this basis, a new route from Adelaide to Fiji is therefore to be considered unlikely from Qantas, but very possibly from Jetstar.

Other possible airlines at Australia’s fifth biggest airport to operate this route include #2 carrier Virgin Australia Airlines (25% share) ‒ especially as it already flies to Fiji from three other airports – Sydney (eight times weekly), Brisbane (seven) and Melbourne (four). However, a bit like Qantas, Virgin’s network from Adelaide consists of only domestic routes, with seven points served. Unlike its arch rival, Virgin Australia’s in-house LCC, Tigerair Australia, does at least have international operations from Adelaide – namely to Denpasar, a similar type of route to Nadi with a high-proportion of outbound leisure traffic. That said, it does not have any services to Fiji at this time, so any new route to Nadi would represent a strategy shift for the two airlines.

Contemplating the Nadi end of the route, the potential carriers at Fiji’s main airport were considered next and, as expected, the national carrier Fiji Airways is currently the largest airline (63% share) in terms of weekly capacity. Fiji Airways is well-versed in services to Australia – it biggest overseas market – with flights to Sydney (14 weekly), Melbourne (five), and Brisbane (four). So it would seem not unreasonable that the carrier could consider a service to Adelaide. It may even choose to overlook a service into Australia’s fourth biggest airport, Perth, another unserved city pair, given the extra flying costs associated with the 6,300-kilometre sector to Western Australia versus those available to Adelaide – a city pair which is around 2,000 kilometres shorter. Indeed, Fiji Airways could probably utilise its 737-800 fleet to Adelaide (it uses them to Melbourne which is around 400 kilometres shorter than a potential Adelaide service), whereas Perth could only really be served by its A330s – a much harder decision for the airline to make.

When looking at the previous year of search data, the busiest month for potential traffic flows (for both directions on the route combined) is August 2016, with nearly 3,900 searches, over 1,900 higher than the lowest monthly figure, which was recorded in April 2016 (1,900 searches). The seasonality profile of this search data is less extreme than the last Unserved Route of the Week (Lille to Rome) with the low-month traffic representing 50% of the highest month. According to OAG Traffic Analyser, because there is no direct service, the top three connecting options chosen by those passengers who did book travel between Adelaide and Nadi in the past year indicates that the majority of connecting travellers use Melbourne (62%), Sydney (23%) and Brisbane (14%). Only five airports were used by transfer passengers over the past year, one of the lowest number of airports witnessed since Unserved Route of the Week began. “Fiji is also a potential stop between the US and Adelaide for the nearly 150,000 annual passengers already travelling indirectly between Adelaide and North America,” adds Cheong.

Indeed, an O&D that is not served by a non-stop flight will typically display a low purchase rate and low traffic. In this instance Skyscanner’s Travel Insight indicates a monthly average of 5.3% for the Adelaide to Nadi route (see graph below). Therefore, if there was a Adelaide to Nadi route, and if bookings performed in line with the “Skyscanner market average” for direct services at both airports (5.5%), the airline operating this route could immediately expect an improved purchase rate of 3.8%, without any increased marketing spend. However, with 35,000 annual searches a twice-weekly service should be immediately viable for the airline selecting to start this potential city pair. Should you need any further reasons to start this potential city pair, Cheong is happy to offer you some. “Adelaide is an emerging hot destination. South Australia was recently ranked by Lonely Planet as one of the top five regions to visit in 2017.” 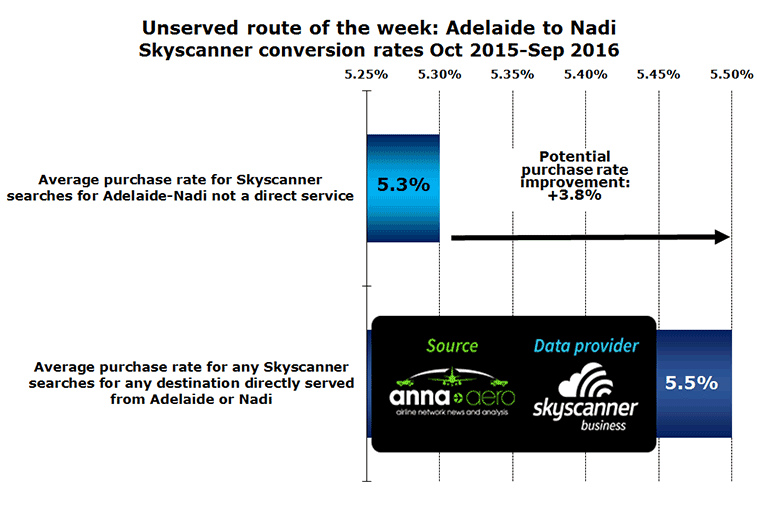