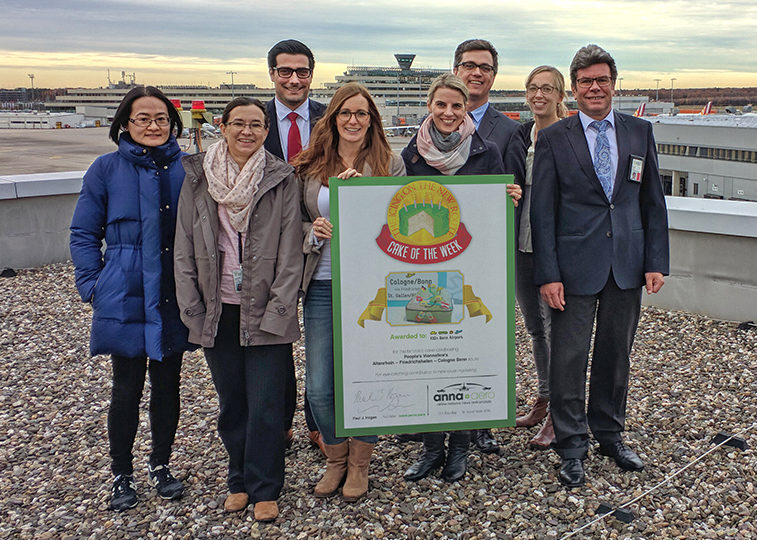 Cologne Bonn took victory in Part II of anna.aero’s W16/17 Cake of the Week public vote, with its show-stopping cake presented at the launch of People’s Viennaline’s route from Altenrhein and Friedrichshafen. The airline, which inaugurated the route on 2 November, will operate the airport trio link twice-daily on weekdays. Seen celebrating Cologne Bonn’s victory on the roof of the airport’s offices are its Business Development and Aviation Marketing team: Chi Mee Yuen, Astrid Thüssing, Tobias Lyssy, Joanna Hagemeyer, Maike Lyssy, Jan Möller, Carina Hennes and Ulrich Stiller. This is the second time this year that Cologne Bonn has won anna.aero’s Cake of the Week competition, with it claiming its first title of 2016 back in February for the arrival of Pobeda from Moscow Vnukovo. 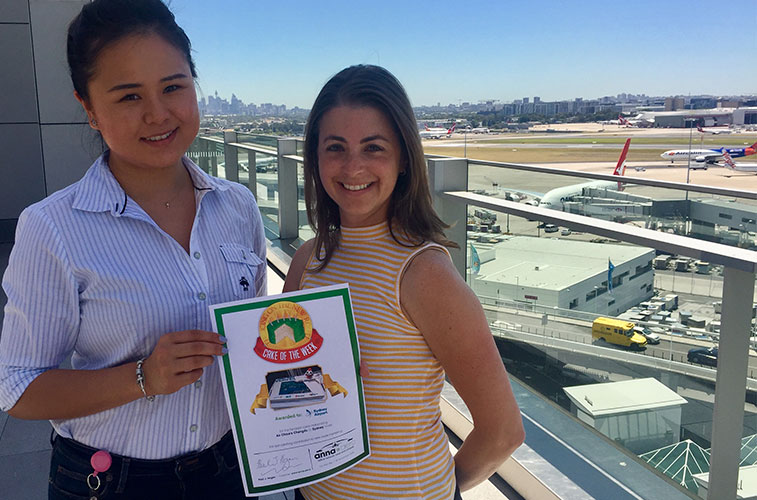 This week Sydney Airport celebrated winning the anna.aero Cake of the Week award, given to the airport in recognition of the cake it presented at the launch of Air China’s new route from Chengdu. The Chinese city becomes the third Air China connection from Sydney, with the airline already linking Australia’s largest city to Beijing and Shanghai Pudong. Seen celebrating the victory are Sydney Airport’s Aviation Business Development Analyst, Selena Ai and Aviation Commercial Coordinator & Events Manager, Michelle Aginsky. For those of you with an eagle eye, you’ll be able to spot downtown Sydney in the background and the iconic Sydney Tower. 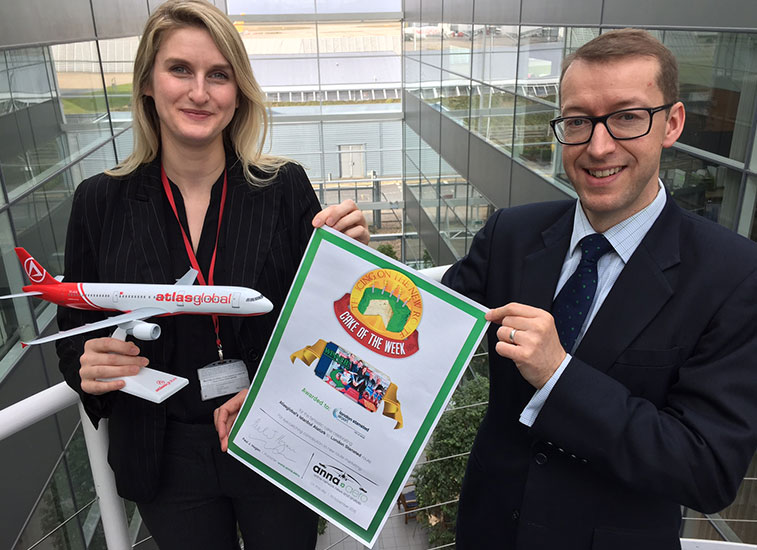 This week London Stansted celebrated winning Part I of the anna.aero public vote for Cake of the Week, with the London airport winning the title for the cake presented at the launch of Atlasglobal’s new connection from Istanbul Atatürk. Seen showcasing the airport’s award-winning achievement are Neringa Ohrstrom, Marketing Manager, London Stansted Airport and Mark Souter, Head of Business Development, London Stansted Airport. 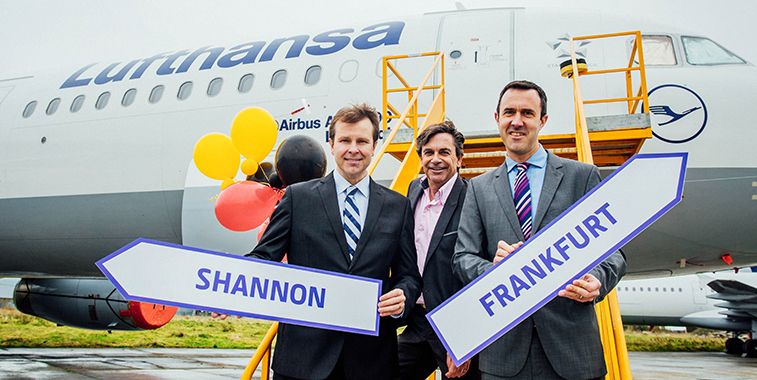 On 16 November, Lufthansa announced that from Saturday 29 April it will be launching flights to Shannon from Frankfurt. The weekly A319-operated service will be flown until 28 October. Welcoming the announcement Matthew Thomas, Chief Executive, Shannon Group, said: “We are delighted to welcome Lufthansa to Shannon with their first scheduled service. This is a significant milestone for our airport and region by one of the world’s major airlines. Germany is Ireland’s third-largest source of visitors and the addition of this new Frankfurt service is great news for the Irish tourism industry along the West Coast and beyond, as Shannon Airport will provide German holidaymakers with a gateway to the heart of the Wild Atlantic Way, and Irish holidaymakers with an opportunity to explore a wonderful part of Germany.” Seen celebrating the news in Shannon are: Thomas; Declan Power, Head of Aviation Development, Shannon Airport; and Andrew Murphy, CCO, Shannon Group. Ryanair recently expanded its operations from Brussels with new routes to Hamburg, Grenoble, Madrid, Malta and Milan Malpensa. To celebrate, Brussels held a small event at the Ryanair gate area during the four-hour period in which the routes launched. Events taking place included paparazzi actors who interviewed passengers in a comic act, a to-go food bag with a dessert and a drink (anna.aero was informed Milan-bound passengers were treated to tiramasu), and a cash cube where contestants who caught the black-coloured ping pong ball got to participate in a raffle to win Ryanair tickets, with five pairs of tickets up for grabs. On 7 November Luxair inaugurated flights between Luxembourg and Turin, with the Italian airport celebrating the arrival of its latest carrier with a cake and ribbon cutting ceremony. The route will be flown four times weekly on the airline’s 78-seat Q400s. Helping to cut the cake and ribbon was Martin Isler, Luxair EVP and COO. 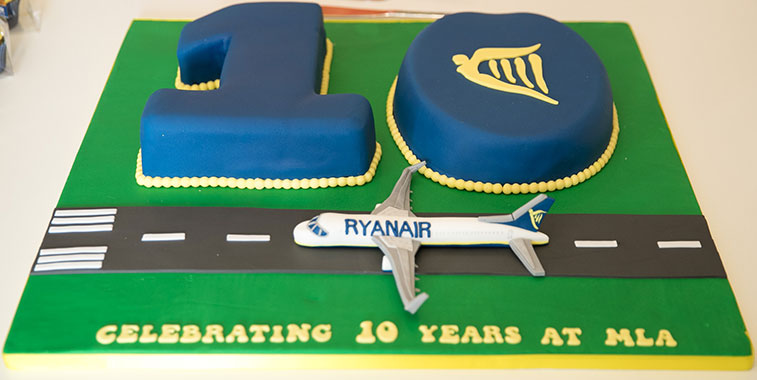 On 15 November, Ryanair celebrated its 10th anniversary of flights to Malta. Since launching operations to the Mediterranean island in 2006, Ryanair has carried over eight million passengers from Malta. For S17, the airline is currently planning to offer 42 routes from Malta, including new summer services to Brussels, Catania, Nuremberg, Toulouse, Valencia and Vilnius. To celebrate the milestone, Malta Airport commissioned this anniversary cake. On 14 November Ural Airlines launched operations from Moscow Zhukovsky to Osh in Kyrgyzstan. The Russian airport informs anna.aero that the first outbound and inbound flights had 100% load factors. The route will be served twice-weekly on the airline’s A320s. Ural will from 22 November add flights from Zhukovsky to Dushanbe and Khudjand (both twice-weekly), while a route to Bishkek (also twice-weekly) will begin on 28 November. To toast the arrival of Ural Airlines, Zhukovsky baked this classic cake. On 2 November Norwegian launched its latest route from its Gran Canaria base, a 2,932-kilometre link to Rome Fiumicino, however the route inauguration was celebrated on 16 November. To toast the new service, the Canary Island airport baked this Colosseum and Norwegian-themed cake. The sector will be flown twice-weekly (Wednesdays and Saturdays) and faces direct competition from Vueling’s weekly (Saturdays) service. 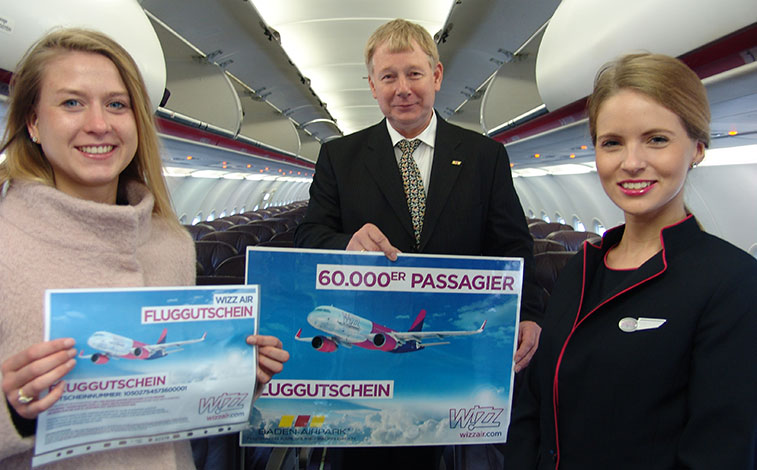 On 18 November, Karlsruhe/Baden-Baden Airport welcomed its 60,000th Wizz Air passenger of 2016, with the passenger marking the achievement being Hannah Stauss who arrived from Budapest on flight W62307. As well as Budapest, the airline also links the German airport to Belgrade and Tirgu Mures. Seen celebrating Wizz Air’s achievement are: Stauss; Markus Mußler, Head of Karlsruhe/Baden-Baden Airport; and Wizz Air Crew Member Bernadett Bittner. On 31 October TUIfly Belgium commenced its latest route from Antwerp, a 1,547-kilometre link to Murcia. The carrier will operate the connection three times a week on its E190s. The Spanish airport celebrated the new route on 19 November by welcoming the inbound aircraft with a water arch, while a cake was also baked to herald the occasion. Honoured with the cutting of the cake were Maarten Cooreman, Aviation Development Manager and Pedro Vicente Gallut Adán, Murcia-San Javier Airport Director. 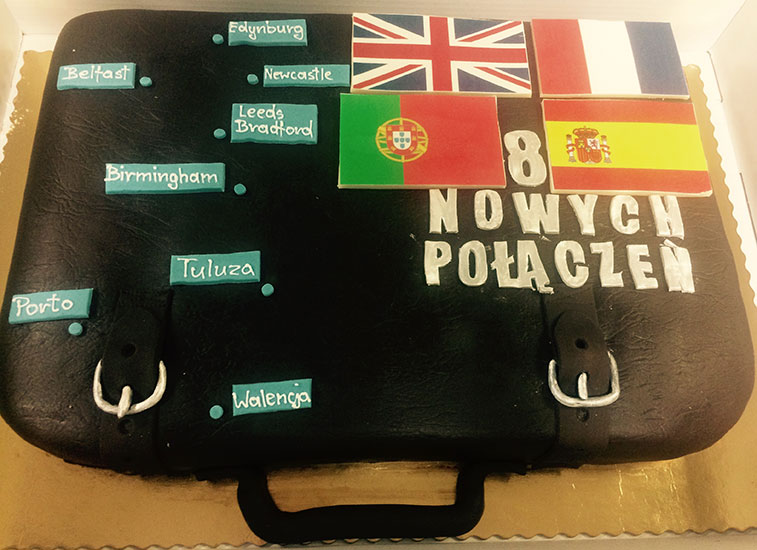 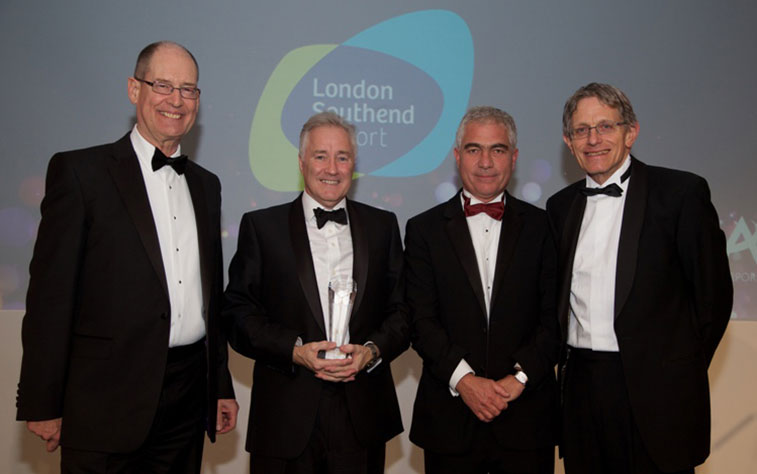 On 22 November London Southend Airport was named the ‘Best Airport in the UK’ (with under three million passengers per year) at the Airport Operators Association (AOA) Annual Awards. This is the second year in a row which has seen Southend be awarded the title. Seen celebrating with the award are: Ed Anderson, Chairman, AOA; Glyn Jones, CEO, London Southend Airport, Martin Parker from Award Sponsor Morpho Detection and Simon Calder, Broadcaster and Senior Travel Editor for The Independent.