Iraq Airways halves in size as flights to Saudi Arabia are suspended, but many bright spots remain in Iraq 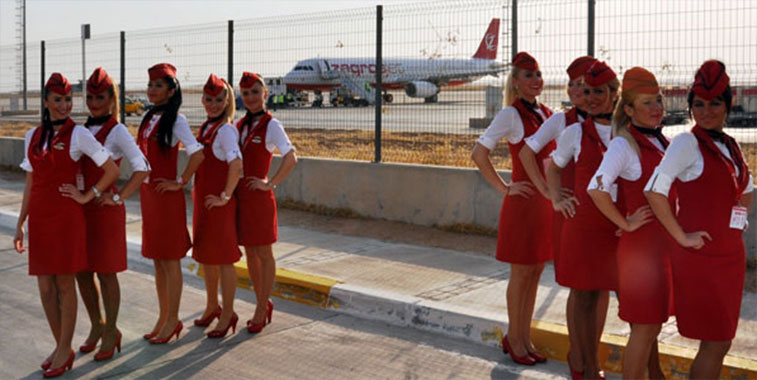 Zagrosjet opened a base in Erbil in northern Iraq in October 2013. The airline, which is owned by Turkish carrier Atlasglobal, is now the eighth largest in Iraq, a position it has maintained over the last 12 months.

Iraq sits at the heart of one of the most troubled regions in the world, but its aviation market remains dynamic, with many carriers entering and leaving the country on a regular basis, normally as a result of social, economic or political change. This November, the Middle Eastern nation is served by 36 different airlines and offers flights to 20 different countries across the region, Europe and Asia, as well as double-digit growing domestic market. Overall, weekly seats are down by just over 10% year-on-year, from 161,000 to 144,000 seats, but there are many tales within that capacity story.

Unsurprisingly, Iraqi Airways – which has switched from using airline code IAW to IA over the last 12 months – is the largest carrier in Iraq. However, frosty relations with neighbour Saudi Arabia has seen the withdrawal of all flights between the two nations. Last November, some of the airline’s biggest routes in terms of weekly seats were to Saudi Arabia, so the impact on the its capacity has been stark, with 46% of total weekly seats lost over the last 12 months. Inside the airline’s top 12 routes were services from Baghdad to Jeddah (#1 route; 18,162 weekly seats); Baghdad to Madinah (#3 route; 5,405); Najaf to Madinah (#6 route; 2,680); Basra to Jeddah (#7 route; 2,475); Erbil to Madinah (#9 route; 2,000); Basra to Madinah (#11 route; 1,805); and Najaf to Jeddah (#12 route; 1,757). 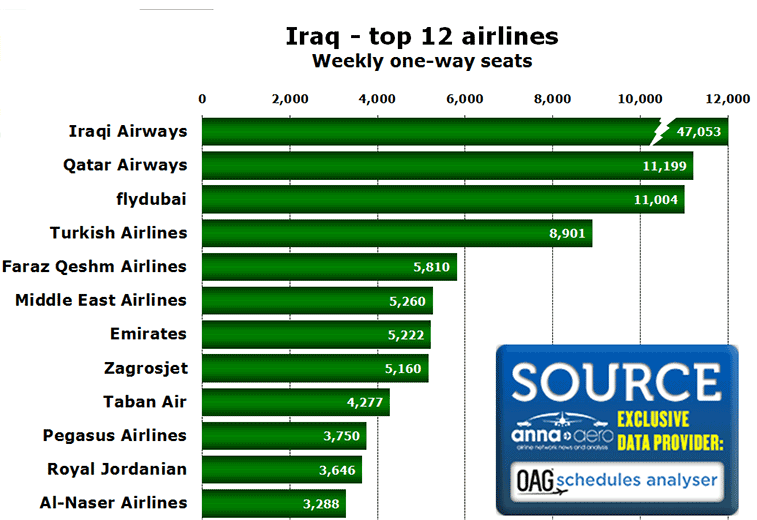 Over the preceding 12 months, Iraq has welcomed eight new airlines – Faraz Qeshm Airlines, Taban Air, Kish Air, Ata Airlines, Iran Aseman Airlines, Cham Wings Airlines, Oman Air and Borajet Airlines – some of which have made it into the country market’s top 12 listing. These new entrants aside, other carriers like Pegasus Airlines (+98%) and Qatar Airways (+61%) have clearly been helping to fill the transfer void for passengers still keen to access the Saudi Arabian market via an intermediate point. Since last November, Georgian Airways has withdrawn from its Iraq operations, flying as it was from Tbilisi to Erbil on a weekly basis with a 50-seat CRJ 200. This has meant the net number of airlines serving Iraq has grown from 29 to 36.

Again the prevailing winds of the social, political and economic ties within the region have had a huge influence on the graph below over the past year. Looking at November 2015 data, Saudi Arabia would have been the clear #1 market, over 12,000 weekly seats larger than the #2 country market at that time, Turkey. Fast forward to November 2016, and Saudi Arabia has disappeared to be replaced by Iran, which has a growing influence in the region since ‘coming out of the cold’ on the world stage. Its weekly capacity has leapt by 173% year-on-year, seeing it also jump from sixth largest market to the #1 spot. The biggest growth has been saved for Syria which, admittedly from a small base, has increased by 663% in 12 months. 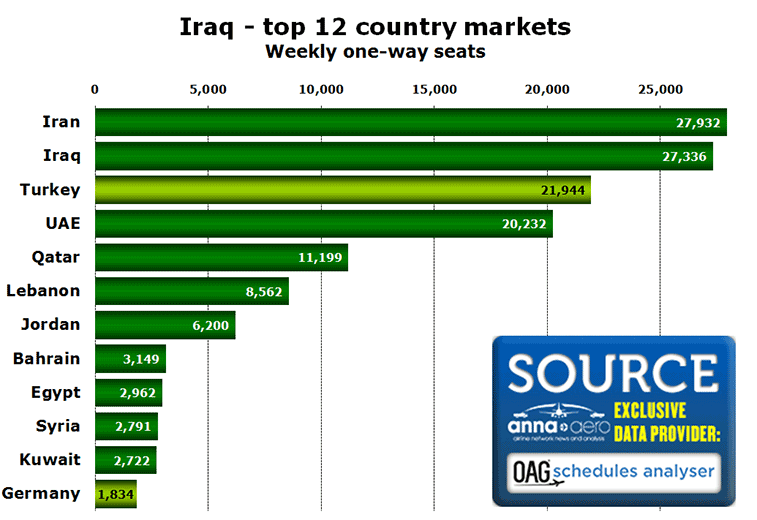 The number of country markets (20) has gone unchanged since last November, however they are not without flux. Oman and Denmark have been added, while Saudi Arabia and Georgia have been lost. Only two markets in the top 12 are from outside of the Middle East – Turkey and Germany (highlighted in light green). Country markets inside the top 12 feeling the capacity squeeze include Bahrain (-55%), Lebanon (-51%), UAE (-8%) and Turkey (-5%). These types of shifts are the stuff of nightmares for airline network planners. While markets like Iraq can be highly lucrative, and therefore look appealing on paper, the reality is that swift changes in world affairs and the resulting market uncertainty will cause headaches in capacity planning departments.

Routes from Najaf, a city 160 kilometres south of the capital Baghdad in central Iraq, are by far the dominant players in terms of top 12 routes, commanding seven of them with services to Iran, UAE, Qatar, Lebanon and Kuwait. Again this year’s graph has been heavily influenced by the loss of routes to Saudi Arabia, which once held top spot (Baghdad to Jeddah) and sixth place (Baghdad to Madinah). The #1 route, between Najaf and Tehran Imam Khomeini, has dramatically risen from 18th place a year ago, although capacity between Najaf and Isfahan has posted the most marked improvement in rankings, seeing the city pair rise from 51st in November 2015 to 11th in November 2016. 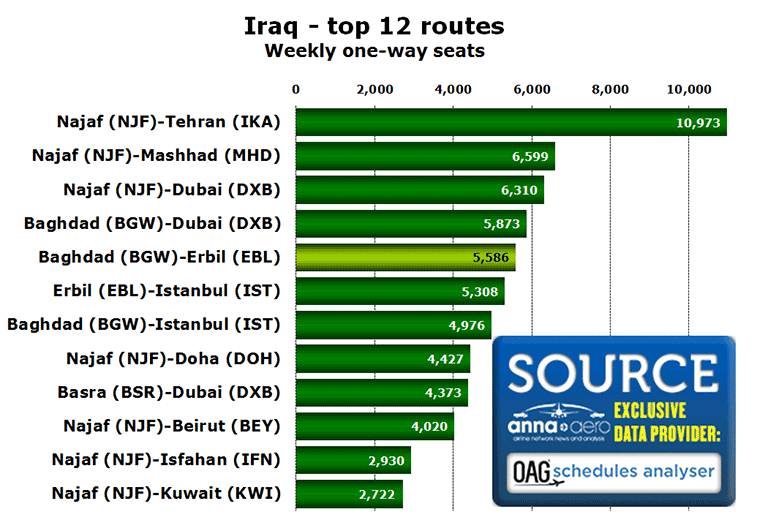 Despite the domestic market growing by 22% year-on-year, only one of the top 12 routes is internal (highlighted in light green), that being Baghdad to Erbil. While Najaf is in control of some of Iraq’s biggest routes in terms of weekly seats, it is not immune to capacity culls. Seats to Beirut are down 69% from the levels a year ago, forcing it from second place on this graph last November down to 10th, and capacity to Dubai from the city is down by 2%. The only other route posting a fall in weekly seats among the top 12 routes is Erbil to Istanbul Atatürk, which has fallen by 20%.

Looking ahead, there are currently no services planned in anna.aero’s New Route Database for the remainder of W16/17 or S17, but that could change very quickly in this market. One thing is for certain, the market will undoubtedly look different again in 12 months time. 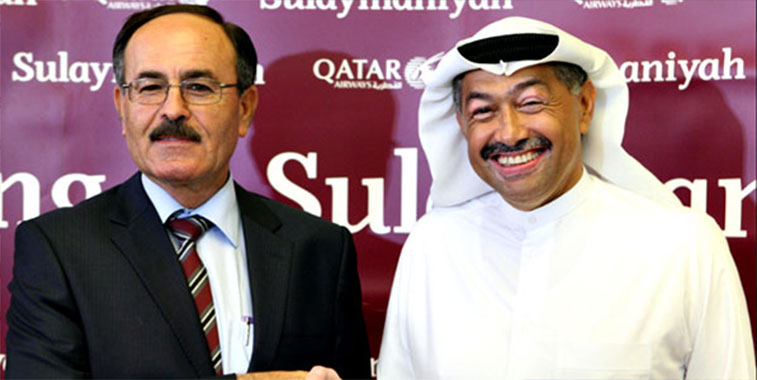 Qatar Airways began flights to Sulaymaniyah from Doha on 20 August 2013 with a four times weekly service. The 1,290 kilometre sector now operates daily and the oneworld carrier was the second fastest growing airline in Iraq’s top 12 over the past year.