Wizz Air celebrated carrying 25 million passengers in Romania in June 2016 while back in January it celebrated the milestone of two million passengers in Macedonia. Across the 17 countries in Central and Eastern Europe that anna.aero has combined together the ULCC is the biggest carrier, with it offering almost 13 million seats in 2016, two and half million more than its closest rival Ryanair.

While several Western European country markets have seen little or no growth for a variety of reasons in 2016, it is worth noting that many Central and Eastern European countries have seen impressive growth. This week anna.aero looks in more detail at a basket of 17 of these countries; Albania, Bosnia & Herzegovina, Bulgaria, Croatia, Czech Republic, Estonia, Hungary, Latvia, Lithuania, Macedonia, Moldova, Montenegro, Poland, Romania, Serbia, Slovakia and Slovenia. Reflecting OAG’s definitions of countries Pristina is considered part of Serbia. For the purpose of this analysis we shall refer to these countries as the CEE17. Of these 11 are currently members of the European Union, the exceptions being Albania, Bosnia & Herzegovina, Macedonia, Moldova, Montenegro and Serbia.

In terms of air travel demand Poland is by far the biggest of the CEE17 with more annual seat capacity than the second and third ranked markets combined. Several of these countries are dominated by a single airport. 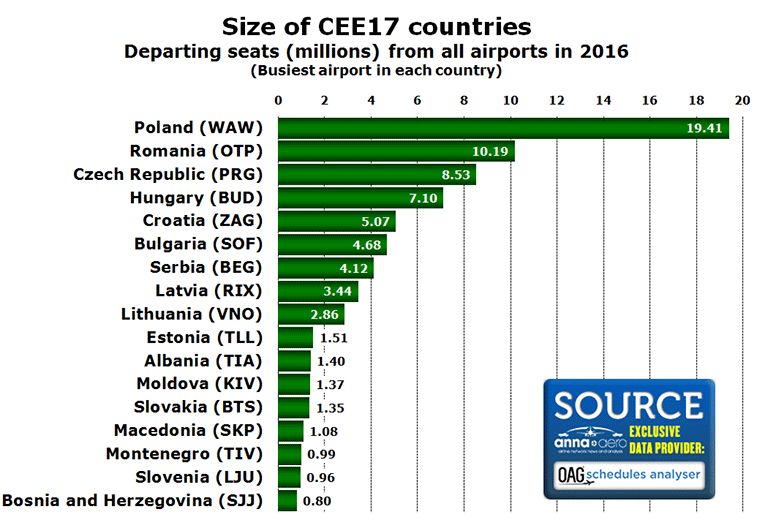 Using OAG data we have compared available scheduled seat capacity for all airports in each country in 2016 with 2015. Thirteen of the countries have seen the number of seats grow by at least 5%, 10 by at least 10% and two (Bulgaria and Romania) by more than 20%. While the six non-EU countries averaged a growth rate of 8.5% this year, the 11 EU member countries have seen capacity growth of just under 11%. 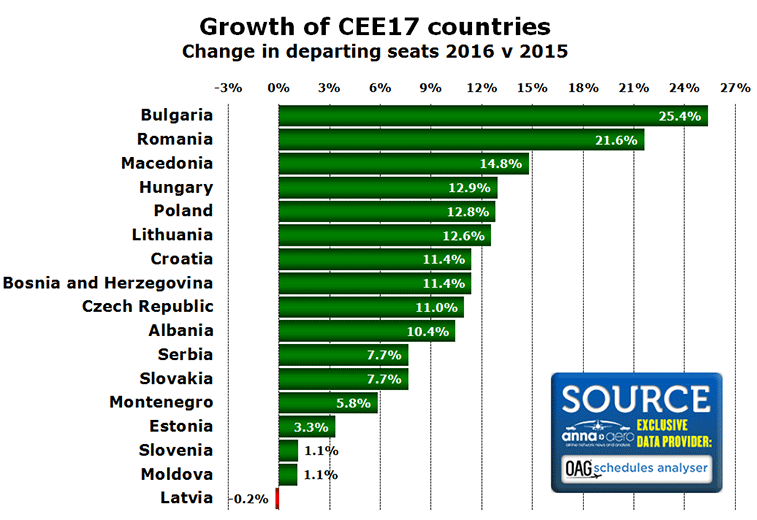 Looking at which airlines provide the most seat capacity across the CEE17 countries reveals that Europe’s two biggest ULCCs lead the way. Wizz Air and Ryanair are way out in front and both have increased seat capacity in the region by almost 20%. Third-placed LOT Polish Airlines has been expanding rapidly since the beginning of the year when the EU lifted the restrictions on the airline’s network growth. The other three carriers to report at least double-digit growth (shown in bright green) in 2016 are all LCCs; Blue Air (+65%), easyJet (+13%) and SmartWings (+14%). Just two of the top 15 airlines in the region have seen capacity cutbacks since 2015. Both Air Serbia and TAROM have cut seat capacity this year by between 1% and 2%. 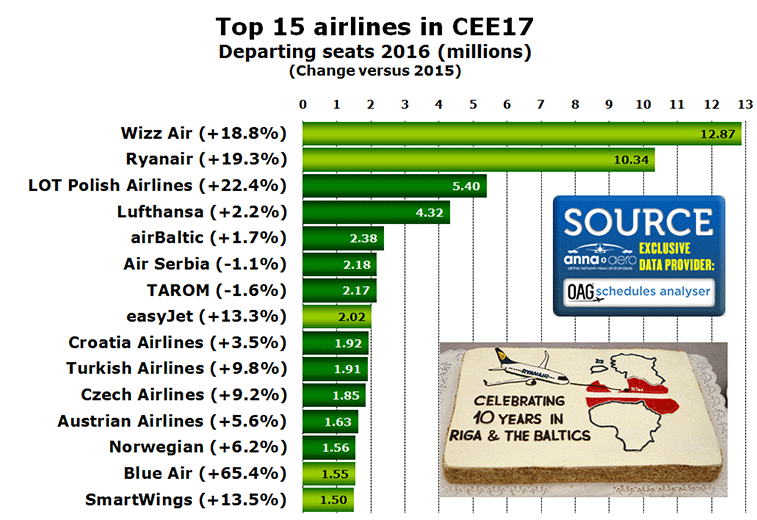 Four other carriers have offered over one million seats from the CEE17 country airports in 2016; Aeroflot (1.37m), Adria Airways (1.25m), germanwings/Eurowings (1.15m) and Bulgaria Air (1.01m). Just outside the ‘1 million’ club are British Airways and SAS, both of which are likely to pass the one million mark in 2017.

Analysis of the leading international country pairs involving CEE17 countries reveals that the Poland-UK market is significantly bigger than its nearest rival Poland-Germany. Of the top 15 country pairs six involve Germany, four feature the UK, three are to Italy, while Norway and Spain each appear once. Whether the UK markets are impacted (and how quickly) by Brexit remains to be seen. 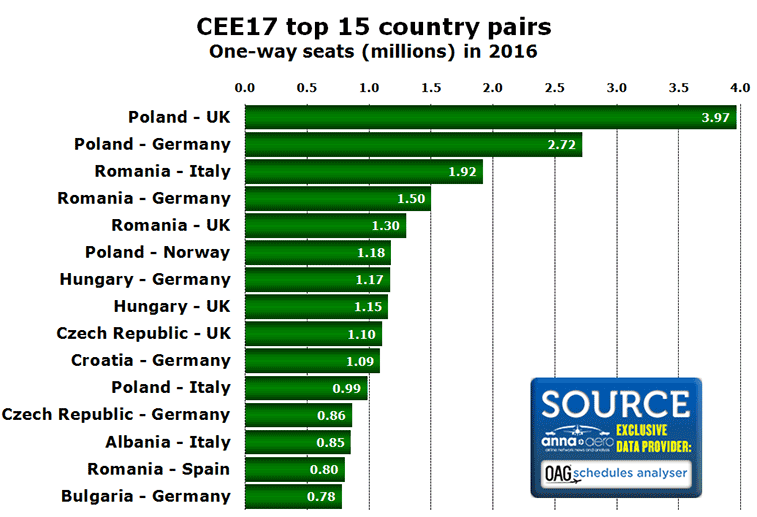 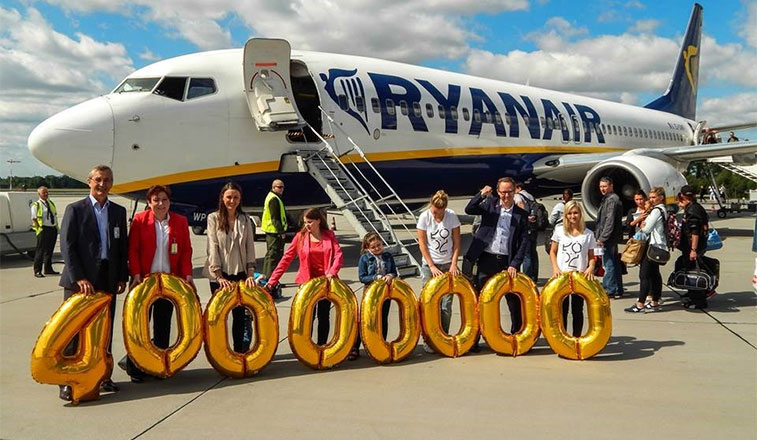 In July 2015 Ryanair celebrated carrying 40 million passengers in Poland. The ULCC now serves 13 airports in the country having added Olsztyn Mazury in November 2016. Four of these airports are bases; Gdansk, Krakow, Warsaw Modlin and Wroclaw.