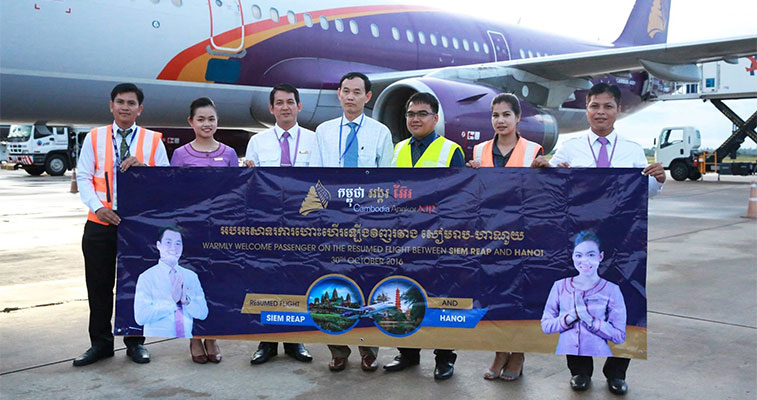 Cambodia Angkor Airlines resumed services between Siem Reap and Hanoi on 30 October with a three times weekly operation. The carrier is #1 in terms of weekly capacity at the Cambodian airport, although it has reduced its annual commitment at Siem Reap by nearly 20% versus last November’s figures.

Handling nearly 3.3 million annual passengers in 2015, Siem Reap is the busiest airport in Cambodia, slightly ahead of the capital city Phnom Penh, which processed just under 3.1 million in the same period. Siem Reap serves the country’s major tourism hot-spot, the Angkor ruins including Angkor Wat, which acts as one of the main reasons for inbound travel to the airport. It is currently served by 27 airlines, connecting the city in north-west Cambodia to 30 destinations in 12 countries across the region. 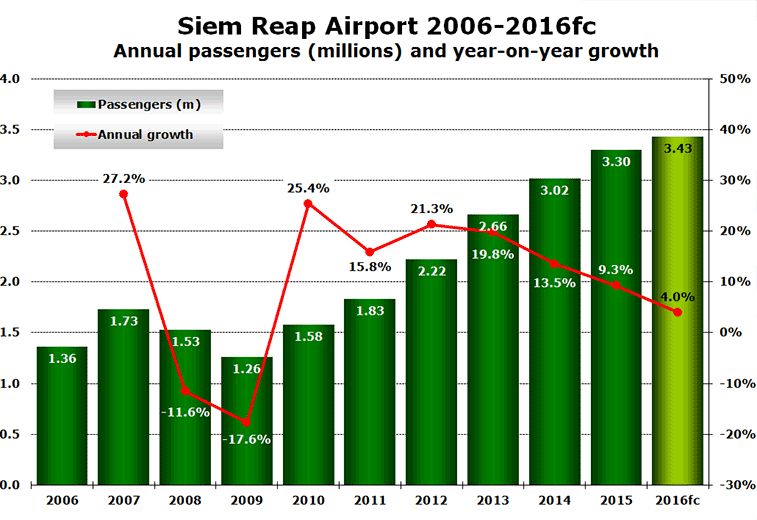 So far during 2016, Siem Reap’s average monthly growth has been 4.0%, peaking at 9.4% in July, while April witnessed a 1.6% decline. Based on this trend line, the airport should expect to finish 2016 with just over 3.4 million passengers (forecast highlighted in light green). However, Phnom Penh could steal top spot from the current #1 airport, as its average growth has been 9.2%, peaking at 15% in February and September, with its low point being the 4.0% increase recorded in August. As a result, 2016 figures to the end of October, see the two airports split by less than 5,000 passengers, but with the prevailing wind firmly behind the capital city. Both airports can be found in anna.aero’s Rest of the World Airport Traffic Trends database, which has monthly statistics listed for nearly 200 airports outside of Europe and the Americas.

Entering Siem Reap’s monthly passenger data for 2015 into anna.aero’s Seasonal Variation in Demand (SVID) calculator, the airport performs well, generating a score of 7.83 ‒ a ‘Good’ rating ‒ making it 44th of the 50+ airports reviewed so far during 2016. The Cambodian airport finds itself nestled between two European capital cities – Belgrade which scored 7.75, and Prague which recorded 7.88.

When comparing it to its Cambodian peers, Siem Reap’s score is not as good as Phnom Penh (0.63 – excellent), but much better than Sihanoukville (15.36 – poor) ‒ in terms of its SVID result. Clearly the year-round appeal of travel to the capital city delivers a better seasonality profile than the more leisure-oriented demand at the gateway to Angkor. Looking at the airport’s SVID result for 2014, Siem Reap’s performance has improved in the last 12 months, with its score reducing from the more peaky traffic profile of 9.58 attained in the previous year.

Siem Reap’s biggest carrier, in terms of weekly capacity, is Cambodia Angkor Air, with around 11,000 seats. However, over the last 12 months the carrier has reduced its capacity by 19%, despite flying to more destinations and offering around the same number of weekly frequencies. Less use of its 176- and 184-seat A321 fleet, and more flying with its smaller ATR 72 and A320 aircraft has resulted in this capacity decline. Only two other airlines within the airport’s top 12 have posted a drop in seat numbers, namely SilkAir (-14%) and Bangkok Airways (-5%). 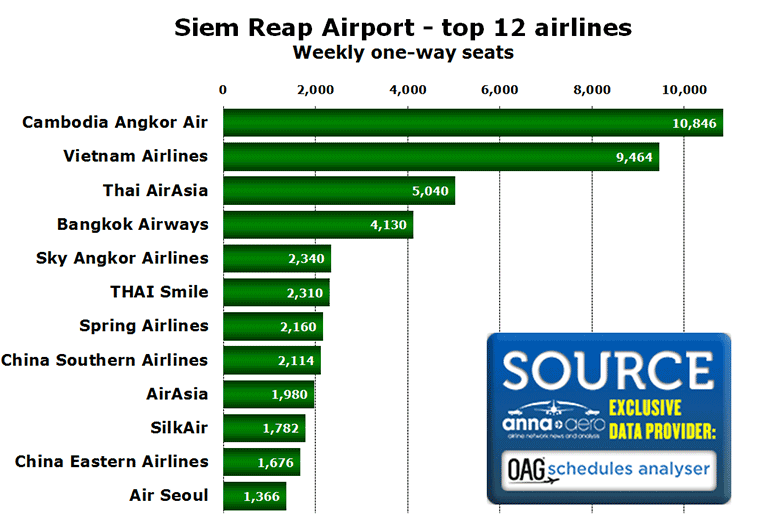 Overall weekly seats at Siem Reap have grown by 18% year-on-year. While two airlines have gone unchanged in the past 12 months – China Southern Airlines and AirAsia – in terms of their respective weekly capacity, most of the top 12 have grown. Leading the pack is Vietnam Airlines which has bolstered its commitment to the Cambodian airport by a staggering 213%, narrowly seeing-off the capacity spike delivered by Chinese LCC Spring Airlines, which has leapt 200% from 720 weekly seats to 2,160. Three new airlines are now operating into Siem Reap which were not a year ago, including two inside the top 12 – THAI Smile and Air Seoul – along with Beijing Capital Airlines, which now flies from Haikou on twice-weekly basis.

Since last November, the top 12 routes have remained the same, although many have altered their positions. Last year’s #1 service, the domestic city pair (highlighted in light green) to Phnom Penh, has seen its capacity drop by 34% year-on-year, presumably as more passengers fly direct into Siem Reap, rather than having to transit in the capital city. It is not all doom and gloom in the domestic market, as weekly seats to the beach resort Sihanoukville in south-west Cambodia have risen by 23%. Phnom Penh has been replaced in top spot by Bangkok, which has increased its weekly seats by 43% in November 2016. However, capacity from across town at Don Mueang has gone unchanged over the same period. 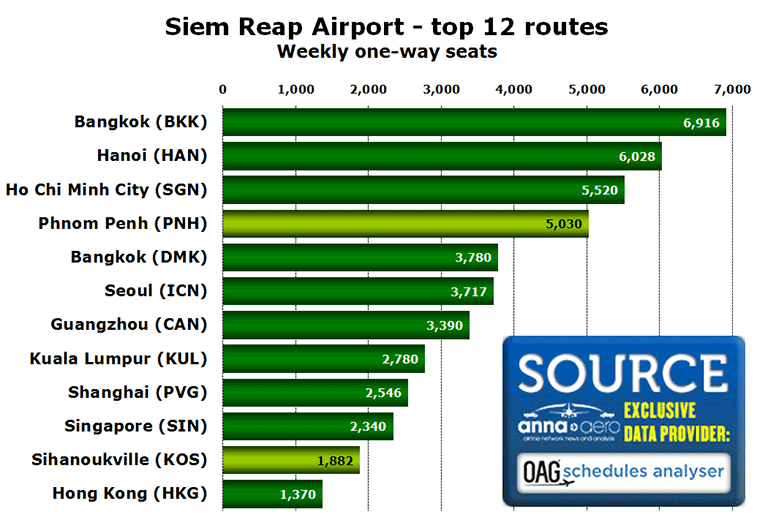 Three other airports have seen a capacity cull over the last 12 months, lead by Hong Kong (-20%), and followed by Singapore (-6%) and Shanghai (-5%). Again it is presumed that travellers are accessing the tourist haven direct rather than using one of these three hubs. Unless of course visitors to the splendors of Angkor are using alternative hubs like Hanoi (+314%), Guangzhou (+19%) and Seoul Incheon (+17%), which are all showing robust annual growth.

Looking ahead, Cambodia Angkor Air is planning to introduce a three times weekly service to Beijing on 16 December, operated by its A320 fleet. Unfortunately the airport is losing one route in January 2017, as Korean Air is removing its daily flight from Seoul Incheon. No other new routes are planned for the remainder of W16/17 or S17 at this stage, according to anna.aero’s New Route Database. 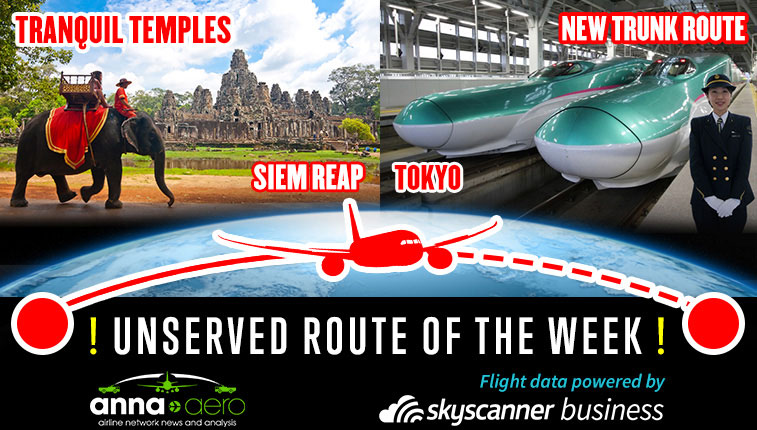 One route which is currently unserved from Siem Reap is Tokyo, as highlighted in our Unserved Route of the Week feature in March this year. With 110,000 searches in 2015, surely this should be a trunk route for Jetstar Japan.