Ellinair adds Christmas flights for W16/17; will serve 15 destinations in Russia next summer; currently ranked #4 at home base in Thessaloniki 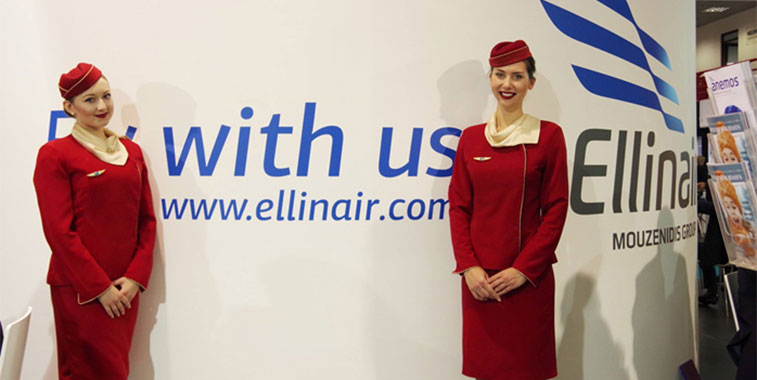 Ellinair and its parent company, Mouzenidis Group, welcomed guests attending the Philoxenia 32nd International Tourism Exhibition in mid-November. The airline launched in 2014 and currently has a full-time fleet of four aircraft (two RJ85s and two A319s) with four 737s leased in during the peak summer holiday season.

Ellinair’s vision is “To emerge as the best regional airline based in Thessaloniki”. The airline, which launched in 2014, is part of Mouzenidis Group which is active in the tourism industry especially in helping Eastern Europeans to visit Greece. The airline operates four of its own aircraft; two 96-seat Avro RJ85s and two 144-seat A319s which are on long-term lease. During the peak summer period the airline has supplemented its capacity by wet-leasing up to four 737s, a mix of -300s and -400s. The ramp up in the airline’s operations during the last three years can clearly be seen by analysing monthly OAG schedule data. This will probably understate the airline’s activities as it also operates a range of charter services which may not be included in its schedule filings to OAG. 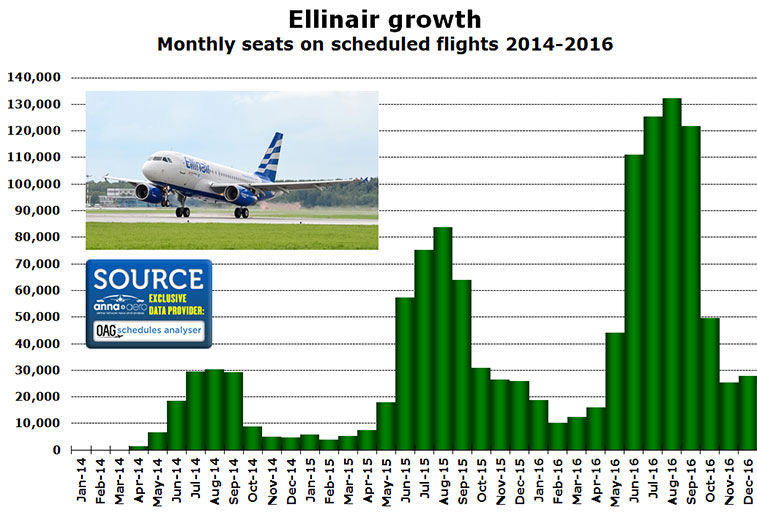 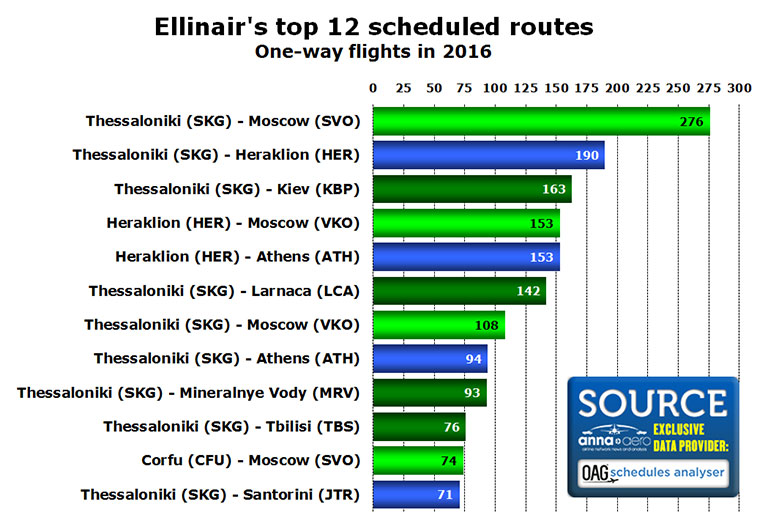 Of the airline’s top 12 routes this year based on flights, four involve routes between Greece and one of two Moscow airports (shown in bright green). Another four routes were domestic links (shown in pale blue) leaving four other routes, one each to Cyprus, Georgia, Russia and Ukraine. On 31 May Ellinair began linking Zakinthos with St. Petersburg with twice-weekly 737-300 flights. Russia is by far Ellinair’s #1 international country market with Ukraine and Cyprus a long way behind.

A glance through issue #6 of Ellinair’s glossy in-flight magazine Anemos (which weighs in at an impressive 172 pages) reveals the airline’s plans for the winter season. Apart from maintaining a number of domestic routes and international routes to Cyprus, Russia and Ukraine, the carrier is also planning a number of ‘Christmas’ routes from Thessaloniki to Budapest, Krakow, Paris, Prague, Vienna and Zurich, as well as Athens to Prague and Vienna and Volos to Prague.

Looking further ahead to next summer, the airline’s website currently lists a total of 45 airports from which flights can be booked: eight in Greece; 16 in Russia; five in Ukraine; three in Germany; two each in Italy, Kazakhstan, Poland and Romania; and one each in Cyprus, Estonia, Georgia, Latvia and Serbia.

This winter Ellinair will use its RJ85s and A319s to operate four domestic routes, two routes to Russia, one each to Cyprus and Georgia, as well as some Christmas routes in six different countries. Some of these would appear to be charter-only operation as they are not bookable on the airline’s website.