Ryanair recently celebrated its 10th anniversary of serving Malta. It made the airport a base in 2010 and will station four 737-800s there next summer. Ryanair now serves over 40 destinations from Malta, six of which launched at the start of the W16/17 season to Brussels, Catania, Nuremberg, Toulouse, Valencia and Vilnius.

With a resident population of fewer than 450,000 people, and covering just 320 square kilometres, the island of Malta is the smallest and least populated country of the European Union. Its capital, Valletta, is closer to Tripoli in Libya (380 kilometres) and Tunis (400 kilometres) than it is to Rome (690 kilometres). Tourism plays a major role in the country’s economy so the airport is an important part of the country’s infrastructure. Between 1998 and 2009 annual passenger numbers were typically between 2.7 million and 3.0 million. However, since 2009 demand has risen significantly with more than 4.6 million passengers using the airport in 2015. 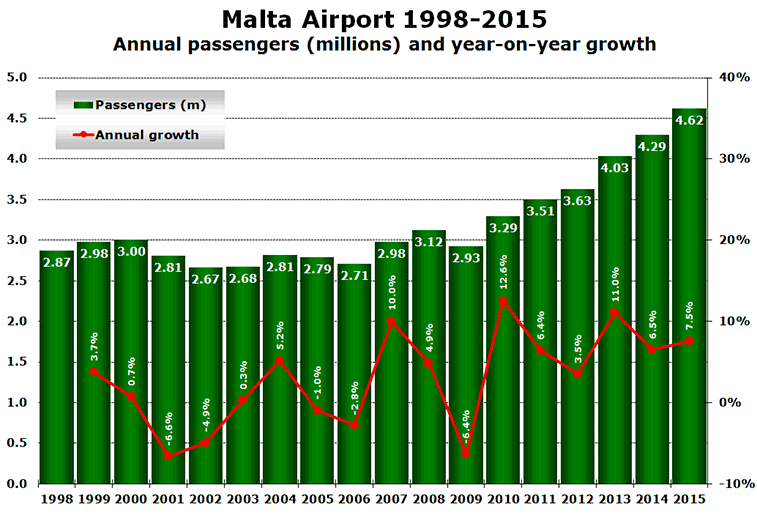 Passenger numbers in the first 10 months of this year are showing growth of 7.8%, with double-digit growth in January, February, March and October. anna.aero predicts that the airport will handle just over five million passengers by the end of the year, representing growth of 70% compared with 2009.

Being a popular tourist destination the airport’s seasonality is quite high. According to anna.aero’s Seasonal Variation In Demand (SVID) calculator, Malta scored 13.45 in 2015, rating it “poor”. Despite significant growth in traffic in 2015 and 2014 the airport’s SVID score has remained remarkably stable at 13.51 in 2014 and 13.64 in 2013. This summer, in the peak month of August, the airport handled almost 600,000 passengers, which was two and a half times as many as in either January or February. 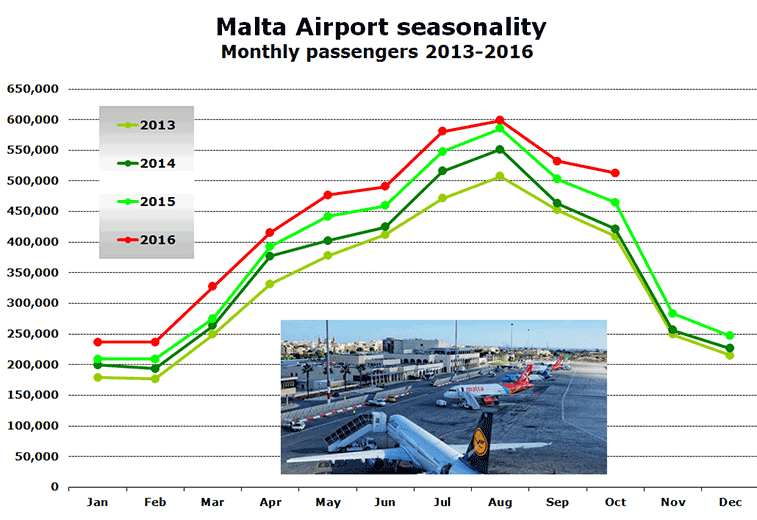 The national airline of Malta, Air Malta, was for many years the dominant carrier in the country. However, after launching flights on 31 October 2006 from both London Luton and Pisa, Ryanair has rapidly grown its presence in the market. Malta became a base for the ULCC in May 2010 and this summer three of its 737-800s were based at the airport. According to OAG data 2016 will be the first time that Ryanair’s seat capacity in Malta will exceed that of Air Malta. Between them the two carriers have accounted for around 65% of seat capacity at the airport in each of the last three years. 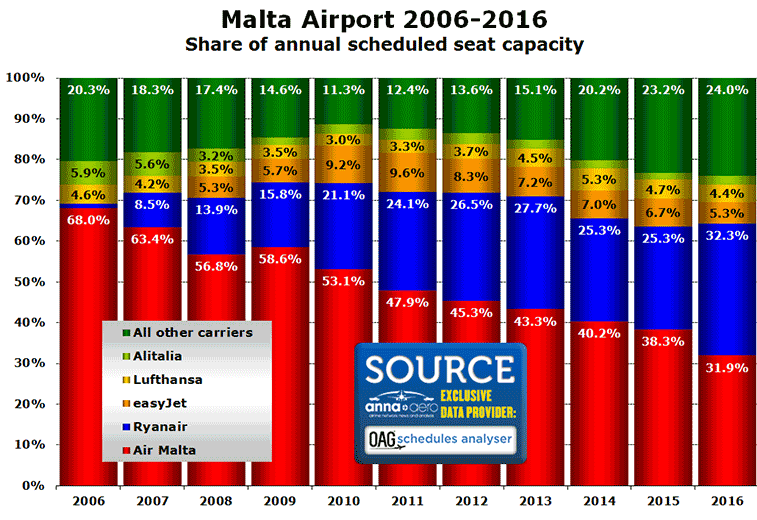 Ryanair’s pan-European rival easyJet launched Malta flights from London Gatwick and Manchester in 2008. By 2011 the LCC had almost 10% of Malta’s annual seat capacity, but this has since declined to only just over 5% in 2016. Routes to Belfast and Rome have been dropped in the last 12 months, though a Geneva link was launched at the start of the S16 season.

With historic links to the UK and geographic links to Italy it is no surprise that these two countries are the most popular generators of air travel to and from Malta. The UK is still the #1 market, but second-placed Italy grew three times faster in 2016, recording a 15% increase in seat capacity compared with just 5% for the UK. Among the top 12 country markets, Poland (+47%) and Spain (+39%) saw the fastest growth with only the Austrian market seeing a decline in annual seat capacity. The growth in the Polish market can be attributed to Ryanair’s launch of new services to Gdansk and Poznan at the start of S16. 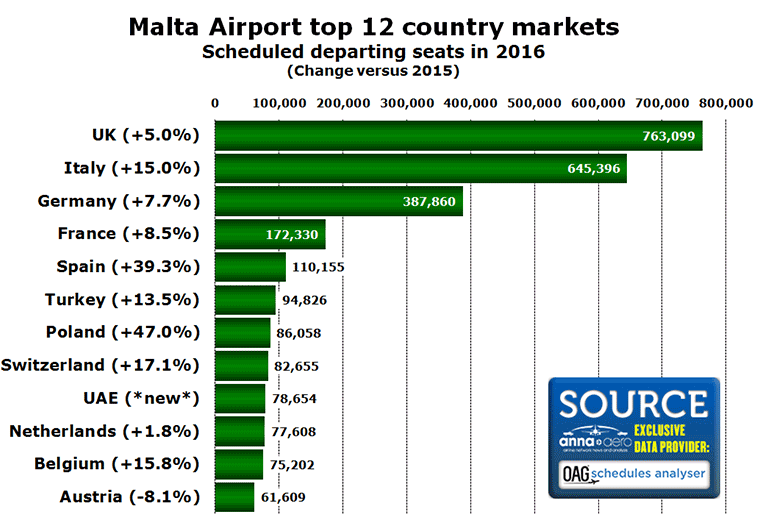 The UAE in ninth place is not really a new country market as Emirates has served Malta via Larnaca in Cyprus for over a decade. However, since February 2016 Emirates has been operating a Dubai-Tunis-Malta-Dubai triangle route meaning than Dubai is now served non-stop from Malta, though the converse is not true.

Five of the top 12 airlines have cut Maltese capacity

Ryanair has now overtaken Air Malta to be the leading airline in terms of seat capacity in Malta. The two carriers share almost 65% of the Maltese market. This summer Ryanair offered flights to 37 airports from Malta, having added Athens, Berlin, Budapest, Cologne Bonn, Gdansk, Karlsruhe/Baden-Baden, Manchester, Poznan, Rome Fiumicino and Weeze at the start of S16. Air Malta served 27 destinations this summer, down from 37 in the peak of S15. Although it resumed flights to Palermo, the national carrier dropped routes to Algiers, Budapest, Djerba, Hamburg, Venice and Warsaw among others. In terms of route overlap with Ryanair the two carriers go head-to-head on routes to Athens, Birmingham, Manchester, Marseille and Rome Fiumicino, while both airlines operate to different airports serving the Berlin, Düsseldorf, London and Milan regions.

Of the top 12 airlines, a total of five have actually cut capacity in the Maltese market this year. British Airways, easyJet, Jet2.com and Vueling all joined Air Malta in offering fewer seats on flights to and from Malta in 2016 when compared with 2015. 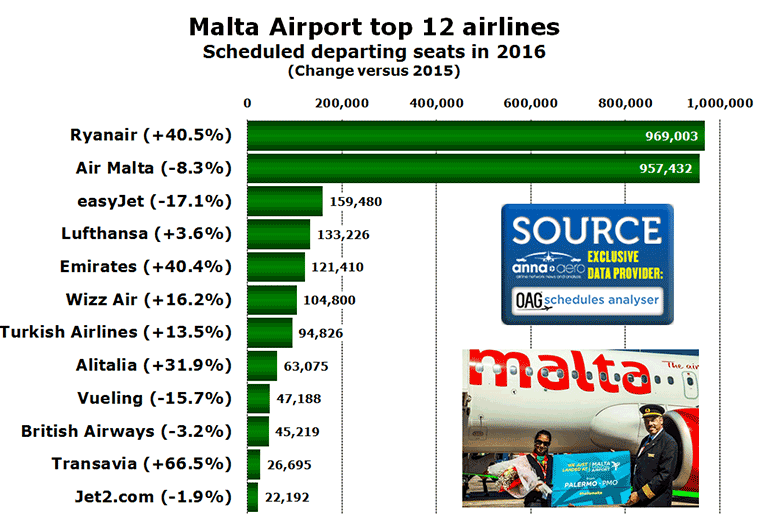 Airlines that have stopped serving Malta in recent times include Air France, Brussels Airlines and Transaero Airlines. On the positive side, new carriers arriving in the last 18 months include Czech Airlines (which launched Prague service on 18 June), Iberia Express (which introduced Madrid flights on 16 June) and Volotea (which began twice-weekly flights from Catania on 24 March). Welcome to Malta! This year saw three new airlines arrive in Malta. Volotea began Catania service in March, while Czech Airlines (from Prague) and Iberia Express (from Madrid) both launched flights in June.

2017 set to be another record year

Looking ahead 2017 looks likely to be another record year for the airport. The start of the W16/17 season saw Ryanair launch six new routes to Brussels, Catania, Nuremberg, Toulouse, Valencia and Vilnius. Of these Brussels and Catania are already served by Air Malta putting more pressure on the national carrier. Other new services scheduled to start in 2017 include Condor to Hamburg, SAS to Copenhagen, as well as Wizz Air to Belgrade and Katowice. 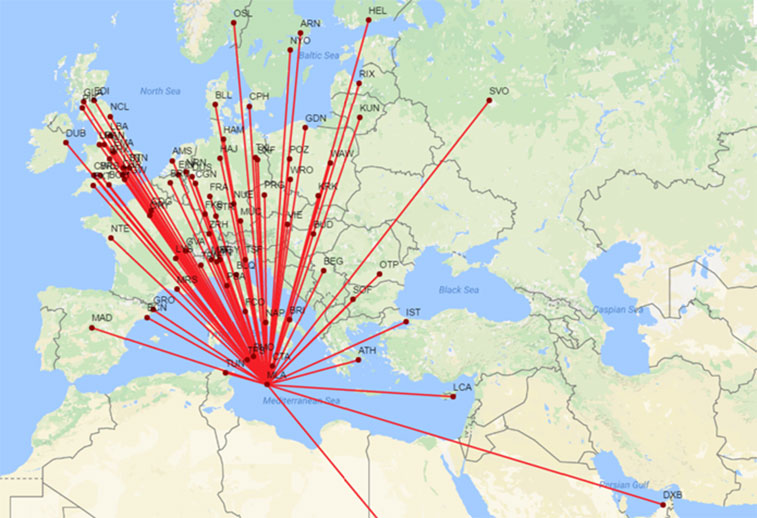 This OAG map shows all the non-stop flights operated from Malta in the first week of August 2016. The route disappearing off to Africa is to Addis Ababa. Ethiopian Airlines serves Madrid from Addis Ababa via a tech-stop in Malta.