Aruba-Milan is “Skyscanner Unserved Route of the Week” with 33,000 annual searches; Meridiana’s next move from Malpensa?? 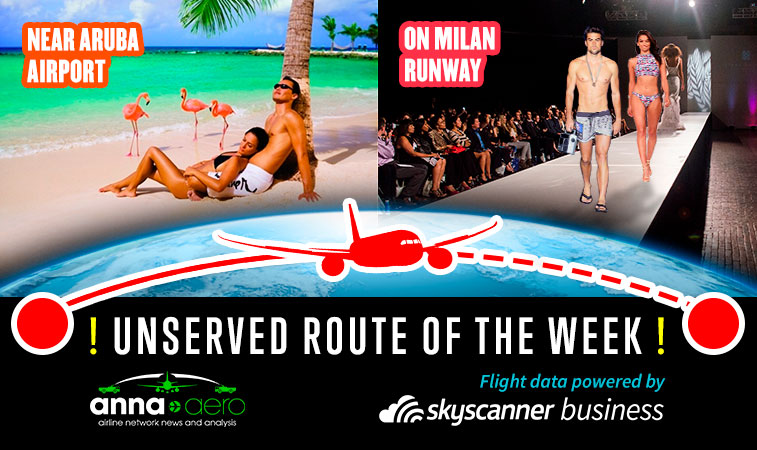 Meridiana already serves Havana and Antigua from Milan Malpensa. So, with nearly 700 leisure-loving Milanese searching Skyscanner for this route every week, we think Meridiana should be the third airline to adopt one of our unserved routes this year.

Before we get started on this week’s analysis we would just like to blow our own trumpet. Back in week two of this feature earlier this year, we ran the Skyscanner numbers on a potential Dublin to Miami route. Well as of last week it is a ‘potential’ city pair no more – as Aer Lingus announced its intention to make the Florida city its 10th US destination from next September! That is the second route we have featured this year which has subsequently been adopted (the other was a Brussels-Glasgow service by Ryanair, giving us a 100% hit rate among major Irish airlines). Do we – and Skyscanner – claim the credit? You bet we do!

Turning to the next great opportunity, based on aspirational data captured from the Skyscanner.net flight comparison site, with nearly 35,000 searches in the last year, a potential new route from Aruba to Milan has been identified as this week’s “Skyscanner for Business-anna.aero Unserved Route of Week.” 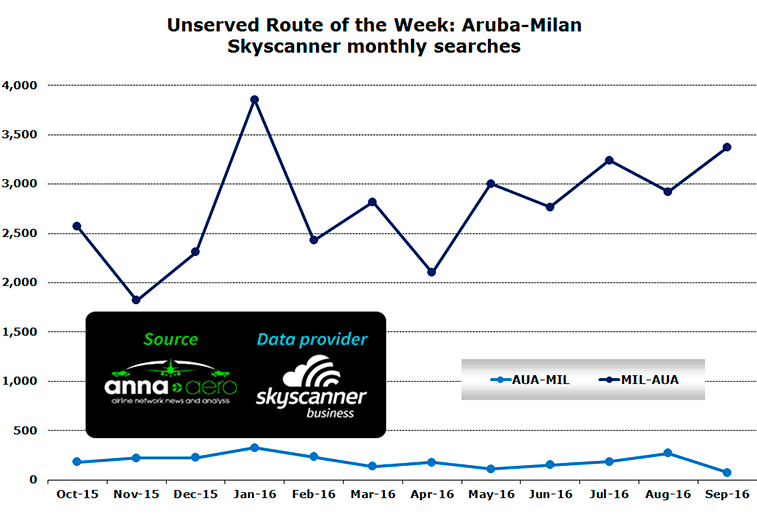 anna.aero says this route is a must for Meridiana

Unsurprisingly, given the population of just over 100,000 in Aruba, the Skyscanner demand on this route shows a huge bias in favour of the Italian end – a 94/6 split. So potential carriers in Milan were therefore considered first. At the city’s biggest airport, Malpensa, LCC easyJet is currently the largest airline (29% seat share) in terms of weekly capacity, according to OAG data for the week commencing 29 November. This short-haul dominance continues with the airport’s #2 carrier, Ryanair (7% share), limiting the prospects of finding a major long-haul airline to operate to the Caribbean. National carrier Alitalia, the fifth largest airline at Malpensa, presently flies to just four destinations from the airport, of which three are long-haul – Abu Dhabi (daily), New York JFK (daily) and Tokyo Narita (five-times weekly). However, it is unlikely that the SkyTeam carrier will have an Aruba service high on its new long-haul route ‘to-do’ list. Far more likely to consider the airport pair is Meridiana, which is the 10th largest airline at Malpensa (2% share), as it already serves Caribbean destinations like Havana and Antigua from the airport. In addition, Neos Air also offers the Cuban capital and La Romana in the Dominican Republic from the airport. So a service to Aruba from Malpensa is perhaps most likely from either of these more leisure-oriented airlines than Alitalia.

Services to Aruba from Milan’s other two main airports – Milan/Bergamo and Milan Linate – should be considered as unlikely at this moment. Neither airport currently has any long-haul scheduled routes, driven in part by market conditions (Bergamo) or operational restrictions (Linate). Approaching 11 million passengers, Milan Bergamo is now Italy’s third-largest airport, behind Rome Fiumicino and Malpensa, and it does have ambitions to move into the long-haul market and thereby diversify from Ryanair which has 84% of weekly seats across 60 destinations. “We have had several non-stop charters from Italy in the past,” says Jo-Anne Arends, Air Service Development Manager at Aruba Airport. “We remain very interested in the Italian market, and we have ongoing talks with Alitalia, and several Italian tour operators that are interested in growing their current business with our destination.”

Contemplating the Aruba end of the route, the potential carriers at the Caribbean airport were considered next and, like in Italy, the options are quite limited. The airport’s biggest carrier is American Airlines (11% share), however it only flies to Miami  (double-daily), Charlotte Douglas (daily) and Philadelphia (three times weekly). Aruba Airlines, which is the #2 carrier at the airport, is also focused on its US and regional operations with its single A320 (according to ch-aviation fleet data). In all, Aruba is only connected to 12 different country markets, mainly regional points, with The Netherlands being the only destination in Europe – KLM flying three times weekly and TUIfly Netherlands twice-weekly from Amsterdam. However, looking at the Skyscanner unserved market data, the next most demanded service from Europe is from Milan.

When looking at the previous year of search data, the busiest month for potential traffic flows (for both directions on the route combined) is January 2016, with over 4,100 searches, over 2,100 higher than the lowest monthly figure, which was recorded in November 2015 (2,000 searches). The seasonality profile of this search data is marginally more extreme than the last Unserved Route of the Week (Adelaide to Nadi) with the low-month traffic representing 49% of the highest month. According to OAG Traffic Analyser, because there is no direct service, the top three connecting options chosen by those passengers who did book travel between Aruba and Milan in the past year indicates that the majority of connecting travellers use Miami (56%), Amsterdam (16%) and New York JFK (15%). Looking at the traffic flows in reverse, Miami’s share jumps to 85%, with Amsterdam down to 13% and Curaçao in third with just less than 1%. This is confirmed on the ground in Aruba by Arends. “Currently Italy is being served by KLM via Amsterdam, Delta over JFK and American over Miami. The highest traffic percentage chooses to combine a stop in the US in a dual destination trip.”

Indeed, an O&D that is not served by a non-stop flight will typically display a low purchase rate and low traffic. In this instance Skyscanner’s Travel Insight indicates a monthly average of 3.4% for the Aruba to Milan route (see graph below). Therefore, if there was a Aruba to Milan route, and if bookings performed in line with the “Skyscanner market average” for direct services at both airports (5.0%), the airline operating this route could immediately expect an improved purchase rate of 50%, without any increased marketing spend. However, with 35,000 annual searches a weekly or twice-weekly service should be immediately viable to the airline selecting to start this potential city pair. 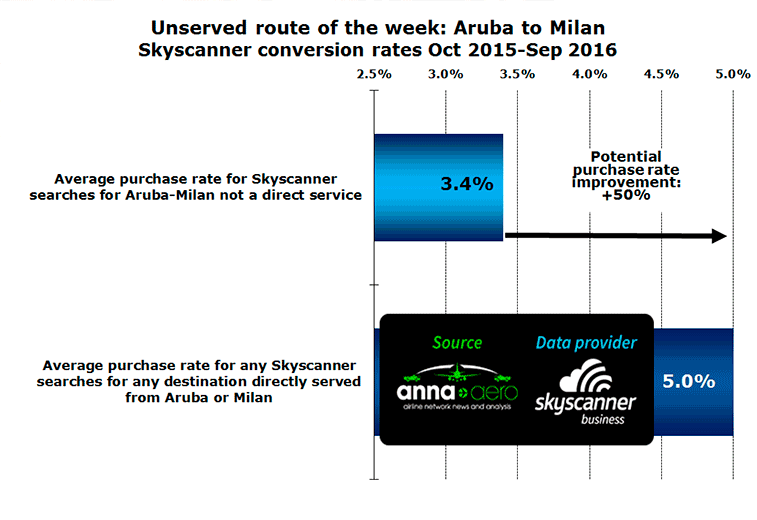