Home-hub for Etihad Airways, Abu Dhabi Airport is the second biggest airport in the UAE, behind the global mega-hub that is Dubai. Alitalia, an Etihad Partner airline, is the ninth biggest carrier at Abu Dhabi this December, helped in part by the launch of services from Milan Malpensa and Venice Marco Polo airports in Italy in March 2015.

Abu Dhabi Airport is the second largest airport in the UAE, but it does serve the capital of the Middle Eastern nation. It is also the home to Etihad Airways – the UAE flag carrier is around a third of the size of Emirates (in terms of weekly seats), about half the size of Qatar Airways and Saudi Arabian Airlines, but more than twice the size of Oman Air. The MEB3 hub carrier commands the lion’s share of capacity at the airport, which boasts a network of the 103 non-stop destinations in 55 countries from around the globe, according to data from OAG Schedules Analyser (w/c 1 December). 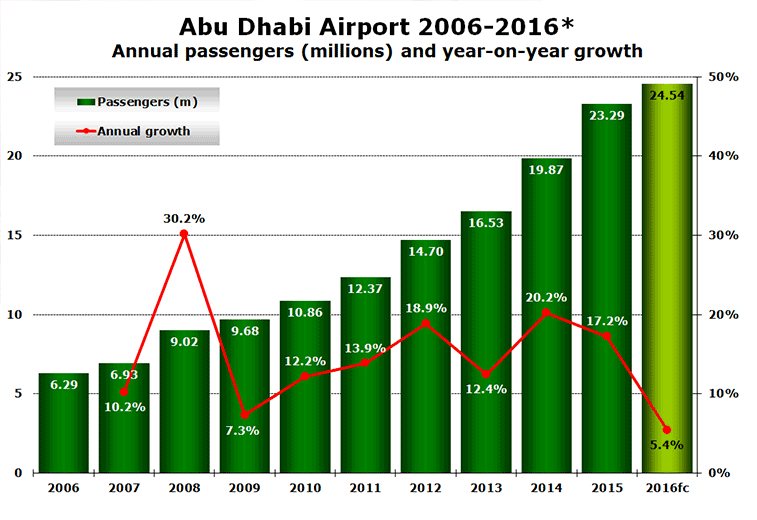 After six years of double-digit annual growth (2009-2015), the wheels of growth have not quite fallen off, but have indeed slowed down at Abu Dhabi. Only January’s passenger increase has been in the double-digit category in 2016 (+15%), with June (+0.7%) and August (+2.3%) both in the marginal bracket, and October’s monthly traffic indicating a 0.9% decline. However, the airport’s growth slowdown is not unique in the UAE, as it should be noted that Sharjah, which has experienced double-digit growth every month between January and September this year, posted only a modest 1.5% increase in traffic in October. Over at Dubai, the story was more or less similar to its peers (with one exception, June traffic was -1.0%), with average monthly increase ranging between 6.1% and 14% during 2016, but October’s growth was a sluggish 2.7% by comparison.

Should Abu Dhabi’s average monthly growth of 5.4% so far in 2016 continue in November and December, the airport will comfortably pass 24 million, to reach around 24.5 million according to anna.aero’s data elves. However, seat capacity for week commencing 1 December at Abu Dhabi is actually down 0.3% year-on-year, so this throughput figure may well be a challenge for the airport.

Entering Abu Dhabi’s monthly passenger data for 2015 into anna.aero’s Seasonal Variation in Demand (SVID) calculator, the airport performs very well, generating a score of 0.68 ‒ an ‘Excellent’ rating ‒ making it 11th out of the 60 airports reviewed so far during 2016. The UAE airport finds itself placed between Phnom Penh which scored 0.63, and Sao Paulo Guarulhos which recorded the same score of 0.68.

When comparing Abu Dhabi to its UAE peers, its score is not as good as Dubai (0.51 – excellent), or indeed Sharjah (0.49 – excellent), which is less than half its size in annual passenger terms. Clearly the year-round appeal of each of these cities, has allowed all of them to deliver a relatively flat seasonality profile, which helps smooth any operational peaks and troughs. Looking at the airport’s SVID result for 2014, Abu Dhabi’s performance has improved in the last 12 months, with its score reducing from the more peaky traffic profile of 0.72 attained in the previous year. Incidentally, this result was significantly better than Dubai (1.00) and Sharjah (0.93) in 2014.

Based MEB3 carrier Etihad is unsurprisingly the #1 capacity provider (and therefore omitted from the graph below) commanding 79% of weekly seats, up from 74% last December. Its weekly seats have grown by 6.7% year-on-year, to nearly 245,000. Etihad Partner airlines – Jet Airways, airberlin, Alitalia (highlighted in light green) – are well-represented in the top 12, and when their respective capacities are combined with Etihad’s, the four carriers control 86% of all weekly seats at Abu Dhabi. While Jet Airways’ capacity has remained static over the last 12 months, airberlin’s has fallen by 14%, whereas Alitalia’s annual growth is the fastest of the top 12 airlines (104%), also seeing it rise from from 16th spot last year. 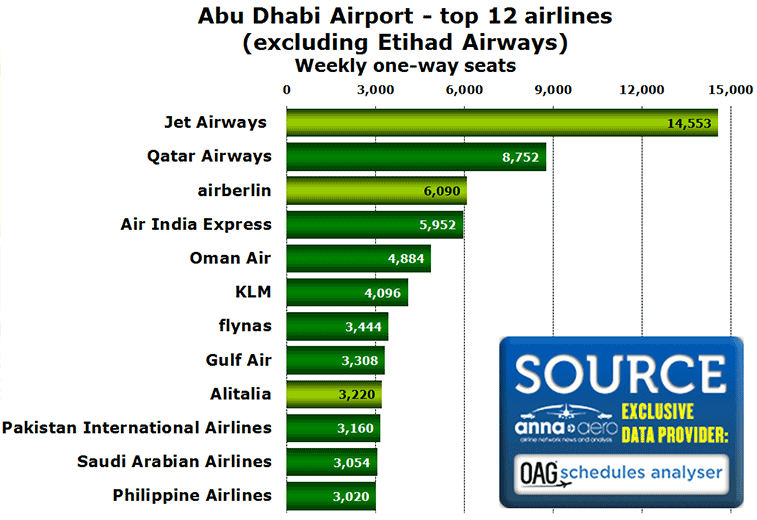 Saudi Arabian LCC flynas is a new entrant not just to the top 12, but also to the Abu Dhabi market over the last year, with its double-daily service to Riyadh and daily operation to Jeddah seeing it claim seventh position. The final new entry to the top 12 is Philippine Airlines, which has risen from 17th to 12th since last December, as a result of its 100% increase in weekly seats. Alongside airberlin’s double-digit capacity tumble, Pakistan International Airlines (-17%) and Gulf Air (-13%) are also in this category, and are the only three carriers revealing annual declines. The three airlines no longer in the top 12 are EGYPTAIR (ninth), airblue (10th) and British Airways (12th).

Over the last 12 months, Doha has not maintained its position as the #1 route from Abu Dhabi, it has improved it, growing by 26% year-on-year, and increasing its gap over the #2 city pair from 1,343 weekly seats to 3,162. The fastest growing route is Riyadh, which has witnessed a capacity hike of 65% since last December, seeing it jump from the 20th biggest route at the airport to seventh. Dropping out of the top 12 routes to make room for the Saudi Arabian capital is New York JFK, which was in 11th spot last year. 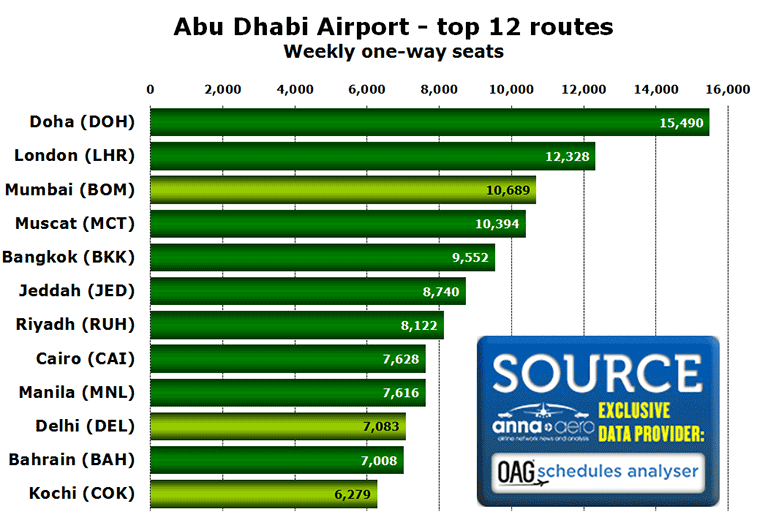 The importance of the Indian market to Abu Dhabi is evident in this graph, as three cities – Mumbai, Delhi and Kochi – are all within the top 12 (higlighted in light green). The biggest routes have grown their share of capacity at the airport from 34% to 36%, due in part to a 6.0% spike in seats across the 12 versus last December. Three airports have encountered annual capacity drops, these being Bahrain (-29%) which was in fifth slot last year, Bangkok (-14%), last year’s #2 route, and Kochi (-4%) which has stayed in 12th position.

Looking ahead to the rest of 2016 and beyond, flynas will strengthen its position at Abu Dhabi on 23 December when its begins a four times weekly service from Dammam. The second biggest airline at the airport, Jet Airways, will also seek to improve its standing by adding a daily service from Tiruchirappalli, scheduled to begin on 1 February, while Virgin Australia Airlines will resume services from Perth in June 2017. 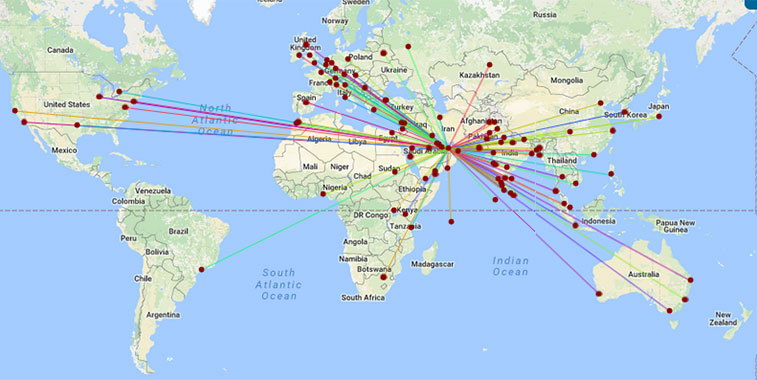 There is no denying that Abu Dhabi is a true global hub, offering connections to 103 airports non-stop across 55 countries. This will grow to 104 on 1 February, when Jet Airways will add Tiruchirappalli to the destination roll call.