Vienna’s passenger share of monthly traffic in Austria ranges between 73% and 88% due to ski demand; Linz and Klagenfurt declining fast 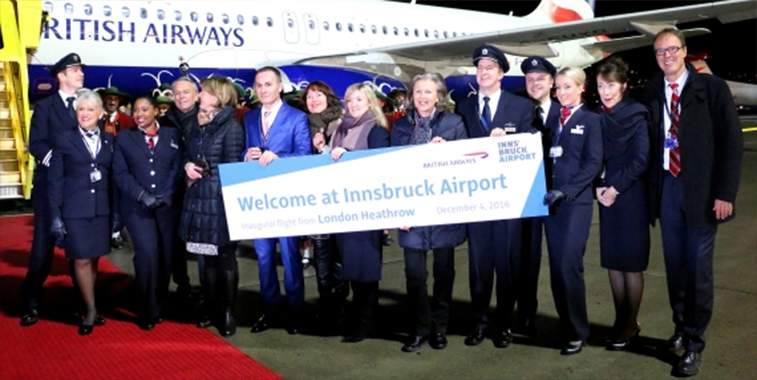 On 4 December British Airways launched its second route to Innsbruck in the form of a four times weekly connection from London Heathrow. The airline already serves the Austrian airport from its London Gatwick base. During S16 Innsbruck was only connected to Gatwick in the UK. However, it will be linked to nine UK airports in W16/17 proving how popular skiing is with the British. In 2015 Innsbruck welcomed just over one million passengers, with almost 60% of traffic flying from the airport across just four months; January, February, March and December.

Austria is a nation that is home to just over 8.7 million people based on 2016 estimates. Around 21% of the population live in the nation’s capital – Vienna. The nation’s GDP in 2016 is estimated to be just over $387 billion, while Vienna contributes around $110 billion of that which is equivalent to 28%. Tourism is very important for Austria’s economy, accounting for around 10% of its GDP. One of the strongest tourism sectors in the nation is skiing, with this domination showing at Austrian airports outside of Vienna.

Only Vienna and Graz growing

So far this year, only two airports in Austria are reporting positive passenger figures, with those being Vienna and Graz. Between Q1 and Q3 in 2016, Vienna welcomed an average month-on-month increase in traffic of 1.2%, while Graz has seen a 1.6% rise. The worst affected airport is Linz, with its traffic showcasing an average month-on-month decline of nearly 19%, while Klagenfurt (-13% average monthly change), Salzburg (-6.3%) and Innsbruck (-2.8%) are also feeling the pinch. Overall for the nine-month period, traffic to Austria is down 0.1% (14,110 passengers) when compared to the same time in 2015, with just under 21.2 million people travelling in and out of Austria between January and September this year. 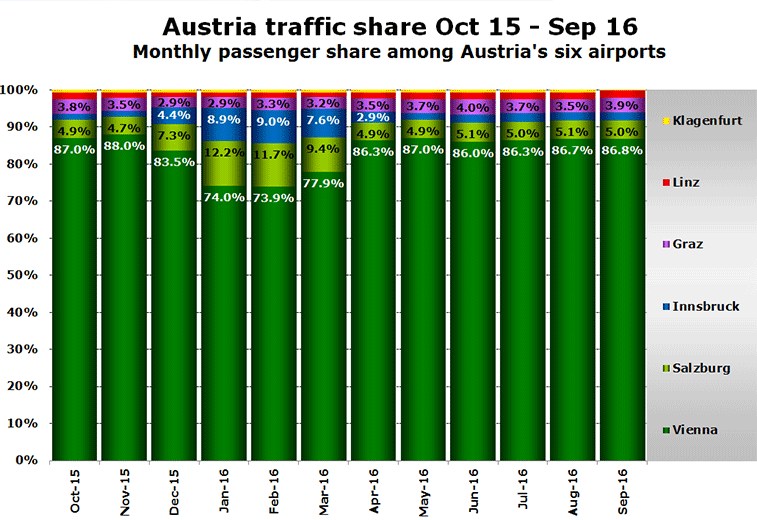 It is clear that Vienna is the dominant airport in Austria, and last year 83% of the traffic to the European country travelled through its capital. However the dominance of Vienna varies throughout the year. Between October 2015 and September this year, the monthly passenger share for Vienna ranged between 74% and 88%, due to the ski season increasing demand to airports such as Innsbruck and Salzburg during the winter season. Innsbruck, the third busiest in Austria, is the most seasonal, with its passenger share of Austrian traffic ranging between 9.0% for February 2016 and just 1.6% in October 2015.

In order to get an understanding of the seasonality of Austria’s airports outside of Vienna, anna.aero’s data elves decided to delve deeper to find out each airport’s Seasonal Variation in Demand (SVID) scores. The worst performing airport was Innsbruck, an airport which has just welcomed a London Heathrow connection with British Airways, with it garnering a score of 37.5 – meaning “Managerial and operational challenges.” This shows in the airport’s route portfolio. In S16 Innsbruck had 11 routes and just over 8,000 weekly one-way seats.

Looking ahead to January, the airport will have 25,000 weekly one-way seats serving 26 routes. In 2015, Innsbruck handled just over one million passengers, with just under 57% of its traffic passing through its terminal between January, February, March and December, with the latter month being the start of the W15/16 season. In relation to the remaining airports’ SVID scores, Salzburg acheived 7.67 – a “Good” rating, while Graz managed 8.85 – also “Good”. Linz for its 2015 traffic achieved 18.06 – a “Poor” rating, while Klagenfurt ranked “Good” with a score of 3.69. 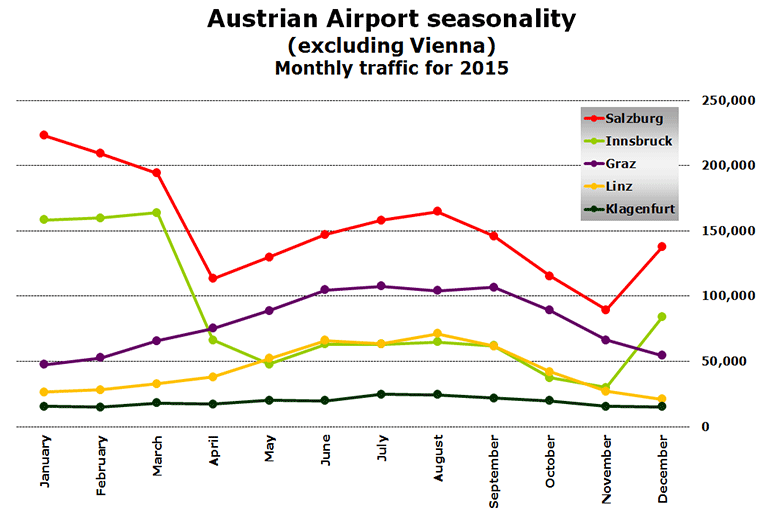 Klagenfurt since April has started to feel the effects of capacity cuts. In September the airport witnessed its traffic drop by 66%, but that was primarily due to the airport’s runway undergoing maintenance work. This year capacity on the airport’s four routes have all been cut, with overall capacity down 11% for 2016, representing a loss of around 20,000 one-way seats. In 2012, the airport had 10 routes and 31% more seats than it has in 2016. One major factor contributing to the airport’s decline is the loss of Ryanair, a carrier that is well known for stimulating markets. Ryanair last served Klagenfurt in November 2013, the month it ended its three times weekly link from London Stansted. In its time, Ryanair has also linked Klagenfurt to Frankfurt Hahn, Gothenburg and Stockholm Skavsta.

National carrier Austrian Airlines is the largest airline operating from Austria in both summer and winter seasons. This winter Austrian Airlines is offering 26% fewer monthly one-way seats than it did this summer. However, it is NIKI which is the most seasonal carrier in its home market, with its winter capacity down by 80%. As well as Austrian Airlines and NIKI, Lufthansa (1% fewer monthly seats in winter), germanwings (-13.5%) and Turkish Airlines (-35.8%) are the other carriers in the top 12 that operate fewer flights in the winter season than in summer. Eurowings has seen the biggest increase in winter capacity when compared to summer, up by 76%. However, this is helped by it opening a base in the Salzburg in January. 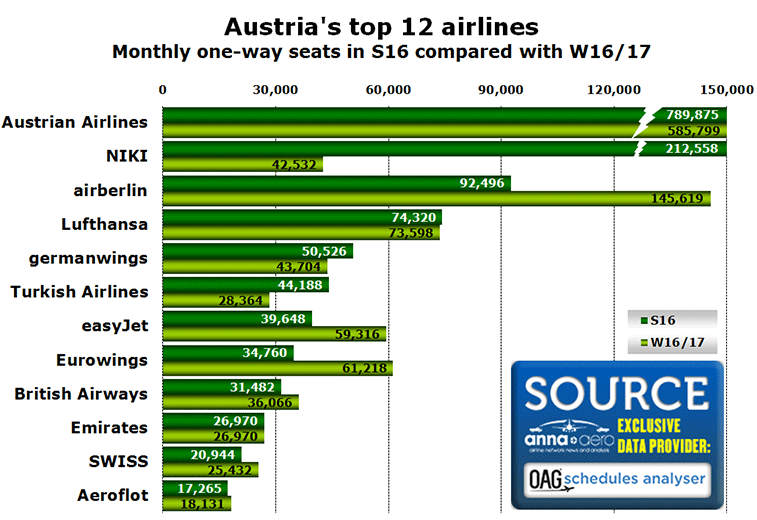 UK carrier Monarch Airlines is the most seasonal airline to serve Austria. This winter the carrier is the 23rd largest in Austria. However it does not operate any routes to the country in summer. Monarch is not the only UK carrier to only operate to Austria in winter with the other being Thomas Cook Airlines. The latter carrier’s German affiliate, Condor, also operates the same way as its UK counterpart by having no summer services to Austria.

Germany is the number one country market from Austria in both the summer and winter seasons, with its winter seat capacity being 3.6% larger than what was offered in S16. The UK is the second largest market this winter and the third largest market this summer (behind Spain). Seat capacity between the UK and Austria is 42% larger in winter than summer, due to the strong skiing program on offer to UK passengers. In S16, there were 13 routes with a combined 129 weekly flights between the UK and Austria; seven to Vienna, four to Salzburg, and one each to Linz (London Stansted) and Innsbruck (London Gatwick).

In W16/17 there will be 30 routes on offer between the UK and Austria, with 14 of those routes operating either once or twice-weekly. Vienna still sees the same seven routes operating to the UK as it had in S16, while Salzburg sees its route count grow from four to 13. Innsbruck sees the biggest route growth though, with its count going from one in summer to nine in winter. Linz still sees its thrice-weekly link to Stansted with Ryanair operating at the same frequency in winter. Overall there will be a total of 196 weekly flights operating between the two countries this winter. 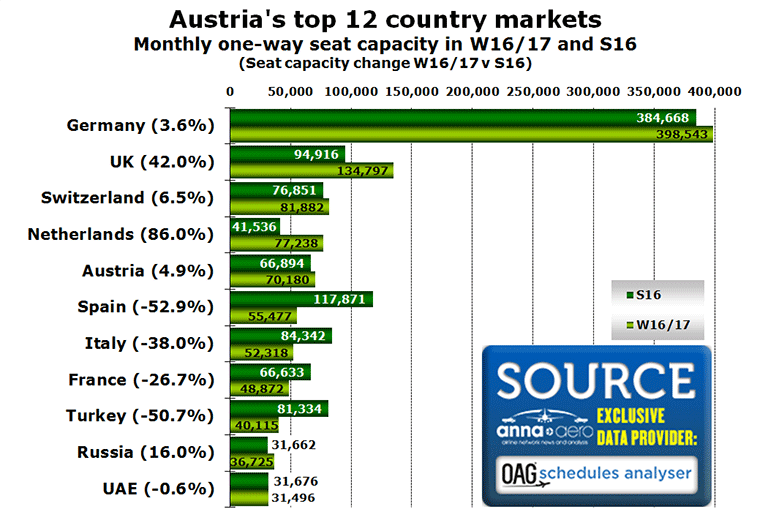 According to OAG schedules there are seven country markets which are connected to Austria in winter but were not this summer. They are: Hong Kong (40th largest market in W16/17); Morocco (55th); Mauritius (56th); Cuba (57th); Maldives (58th); Sri Lanka (61st); and Dominican Republic (62nd). In total Austria will be connected to 65 countries this winter. 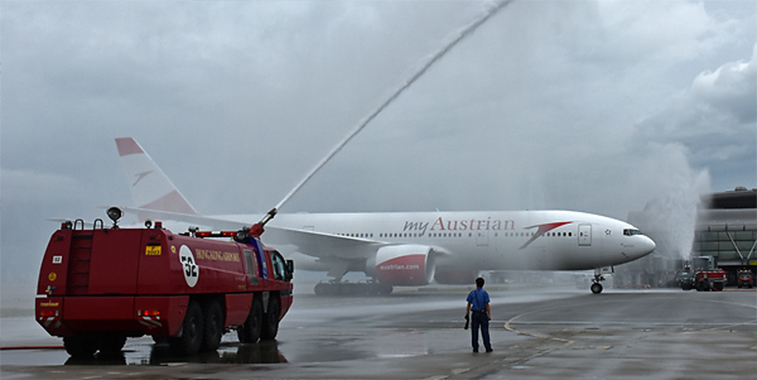 Hong Kong is a new country market for Austria, helped by Austrian Airlines launching flights to the Asian hub on 4 September. Overall this winter there are seven country markets that did not operate in S16. This winter Hong Kong is the 40th largest market from Austria.