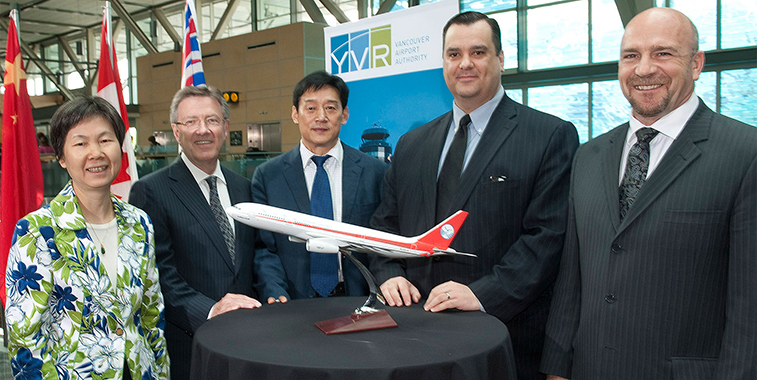 Back in 2012, Vancouver welcomed the announcement that Sichuan Airlines was to serve the British Columbia airport from Chengdu via Shenyang. The route via Shenyang during the past year is the only one between China and Canada to see a capacity cut, a result of the airline choosing to move two of its three weekly flights between Chengdu and Vancouver via Zhengzhou. Overall the airline’s seat capacity to Canada is up 12% when compared to the same time last year, a result of the airline adding higher density A330s on the connection to Vancouver.

During the past 12 months, seat capacity between China and Canada has grown a little over 44%, helped by the addition of six new airport pairs (detailed below). This year the market is served by eight carriers, with Beijing Capital Airlines launching its first flights to the North American nation at the end of December. Canada is the 15th largest international market from China, with it occupying 1.5% of international departing seats in 2016, while Canada’s southern neighbour, the US (China’s fifth largest international market), occupies 5.4% of seats. China is Canada’s sixth largest country market, with it offering 1.3% of seats. Excluding the Canadian domestic market, China has 3.5% of international departing seats from Canada in 2016.

Beijing – Vancouver is number one route

After welcoming a growth in seat capacity of just over 21%, the link between the Chinese capital and Vancouver is the largest in the China-Canada country market. The route has over 19% of all monthly seats between the two nations this winter. Highlighted in light green are the six new unique airport pairings that have opened up in the market during the past 12 months. 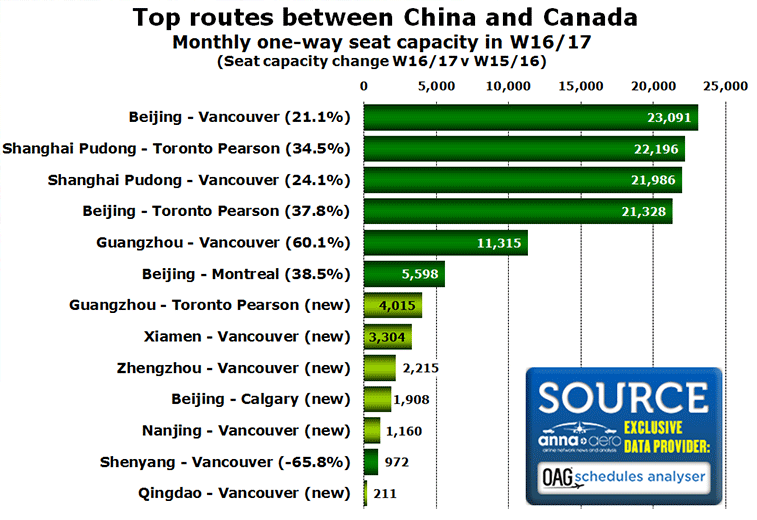 On 30 June Calgary became the fourth Canadian airport to welcome direct flights to China when Hainan Airlines commenced a three times weekly link from Beijing. At the time of the launch, Stephan Poirier, SVP and CCO for the Calgary Airport Authority, said: “This new service – the result of a close collaboration involving a dedicated team of airport, tourism and government partners over many years – opens our region up to a huge global market.” Hainan’s route is the fourth largest new connection in the market this year, and 10th largest overall, with the carrier offering 1,908 monthly one-way seats on the 8,747-kilometre sector.

The only route which has seen capacity cut during the past year is the link between Shenyang and Vancouver, a service which originates in Chengdu. However, overall capacity from Chengdu is up 12%, a result of Sichuan Airlines moving two of its three weekly flights on the Chengdu – Shenyang – Vancouver to operate via Zhengzhou, giving the latter Chinese city its first connection to North America. Another contributing factor for the growth, albeit on a small scale, is down to the airline going from a 237-seat configured A330 to a 243-seat configured A330 (according to OAG schedules), meaning 144 more monthly seats in the market. Overall Sichuan Airlines has 2.6% of annual seats between China and Canada this year.

The largest carrier in the China-Canada market in 2016, and every year since 2007, is Air Canada. In 2007, Air Canada had a nearly 66% market share in the Pacific Ocean country pairing, however this was when there was only three carriers in the market, with the other two being Air China and China Eastern Airlines. 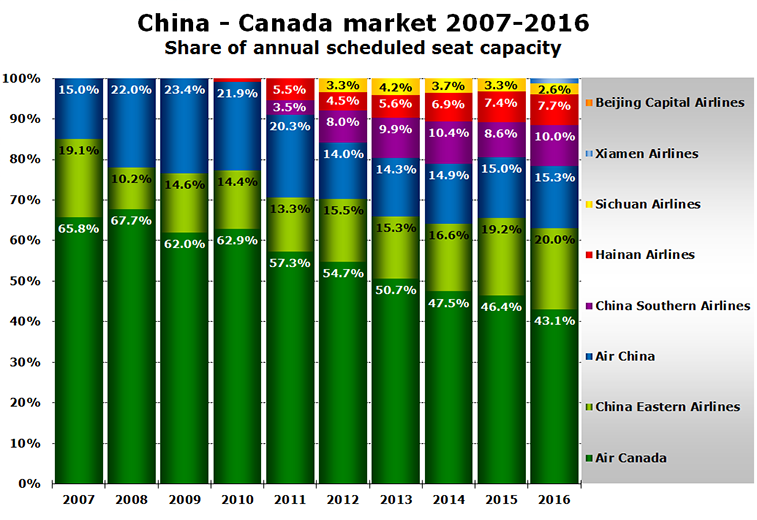 Since 2007, a further five airlines have joined the market, with Xiamen Airlines and Beijing Capital Airlines (launching 30 December) being the latest entrants by commencing services in 2016. As an impact of these airlines arriving in the market, Air Canada has seen its majority share drop to 43% for 2016. Despite its decline, Air Canada is actually offering 82% more annual seats in the market this year when compared to the figure it was operating in 2007, with the market’s overall capacity growing 178% during the past decade.

On 30 December Beijing Capital Airlines will become the eighth carrier to operate between China and Canada when it launches a three times weekly Hangzhou – Qingdao – Vancouver service. This will be the airline’s first operation to North America and its third non-Asian scheduled destination after Madrid and Melbourne according to OAG schedules. Further expansion to Vancouver from China will also take place on 20 December, the day that has been scheduled for China Eastern to commence a three times weekly Kunming – Nanjing – Vancouver service. To accommodate this route, the airline will reduce its Shanghai Pudong – Vancouver link from twice-daily to 11 times weekly.

From 7 December, China Southern Airlines will add a second route to Canada when it begins a three times weekly link to Toronto Pearson from its Guangzhou hub, a 12,437-kilometre connection that will be flown on the airline’s 777-300s. The airline already serves Vancouver. China Southern becomes the third airline to link Pearson to China, with Air Canada linking the Canadian city to Beijing and Shanghai Pudong, while China Eastern also operates the latter route.

Looking ahead to 2017, the largest carrier in the market, Air Canada, will link Montreal to Shanghai from February, a route which the Star Alliance member will operate daily on its 787-8s.”Building on Air Canada’s success in the rapidly growing Chinese market we are delighted to announce Air Canada’s first direct flights between Montreal and China with the launch of a Montreal – Shanghai service next year,” said Calin Rovinescu, Air Canada’s President and CEO at the route announcement in September. “This also marks the introduction of Air Canada’s first 787 service from Montreal, further underlining our commitment to expanding our global reach and reinforce Montreal as a strategic hub.” This link will become the second Chinese connection for Montreal, with Air China having launched a service from Beijing on 29 September last year, a route which won anna.aero’s Route of the Week award. Since launching this sector, Air China has added a tag-on service from Montreal to Havana. Air Canada in 2017 will operate five routes between Canada and China, two each from Toronto and Vancouver to Beijing and Shanghai as well as the new service from Montreal. 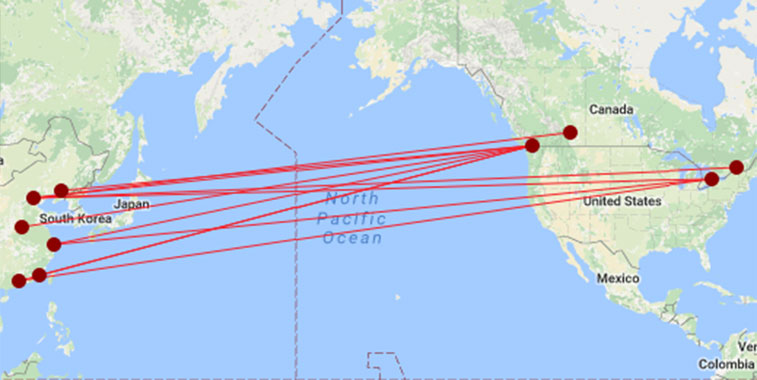 13 non-stop routes are operating between China and Canada this winter, while last winter the market only had seven. New routes that will be starting over the next few weeks include China Southern Airlines linking Guangzhou with Toronto Pearson, while Beijing Capital Airlines will offer a tri-city route between Hangzhou, Qingdao and Vancouver. Finally China Eastern Airlines will link Kunming and Nanjing to the British Columbia airport from 20 December.