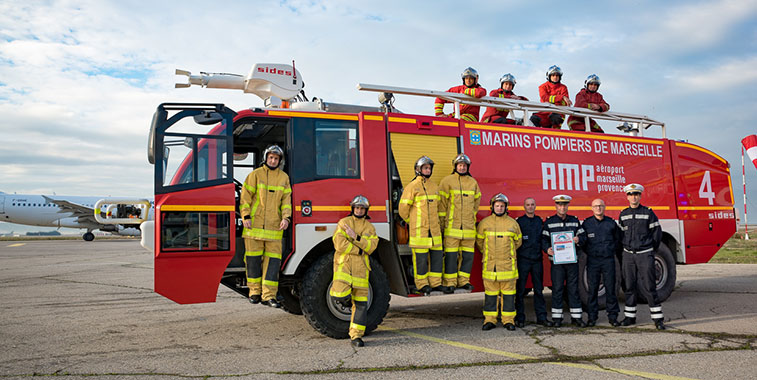 Celebrating the first Arch of Triumph win for Marseille Airport are: Eric Nampon, Lieutenant (Navy) and the rest of his battalion. The French airport won Part II of the W16/17 Public Vote for its FTWA for easyJet’s new route from Berlin Schönefeld on 1 November. 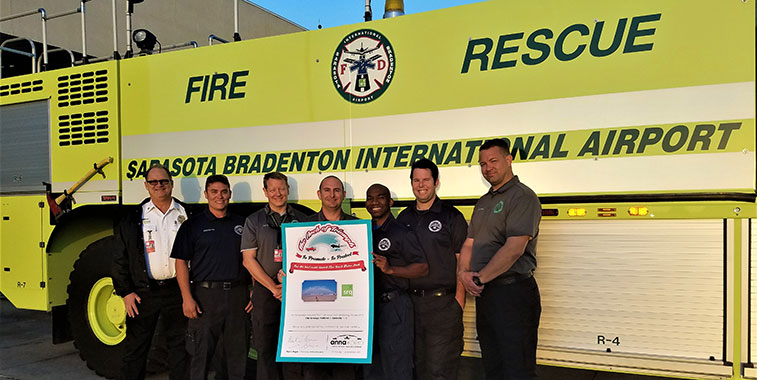 With maybe just two weeks of competition left, Lisbon is still top of the leader board, a position it has held since May or week 19 of the 2016 Arch of Triumph title race. Should it hold on to #1 spot over the last few weeks of December, it would mark the fourth win in four for Europe – with previous winners being Tenerife North (2013), Munich (2014) and Birmingham (2015). It would also mean that United Airlines has been involved in two of the four title victories, having launched flights from Houston Intercontinental to the German winner two years ago, and from the US capital’s main international hub at Washington Dulles into the Portuguese capital this year. Sydney, which has finished twice in the last two years of the Arch of Triumph competition, is nowhere to be seen in the 2016 event, with not a single weekly win this time out, despite having entered this year’s battle twice. But there is still time yet for someone to claim the crown. Keep monitoring!! 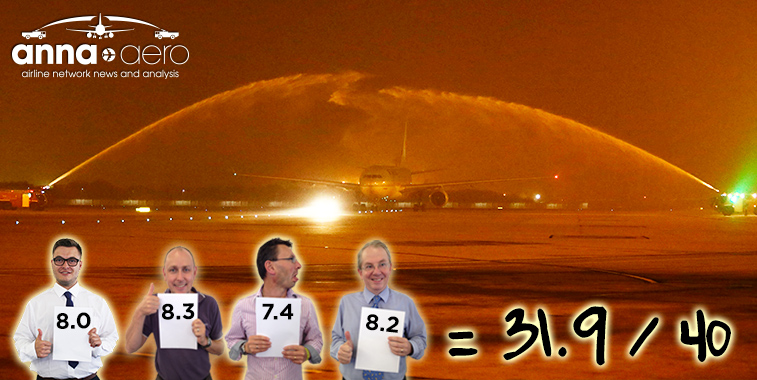 Is there a slight bit of Gangnam Style FTWA here in DEL??

Judge’s comments: It would be a hard-nosed Chief Fire Officer (CFO) which would pass up the opportunity of providing a Gangnam Style FTWA for the arrival of the Korean national carrier from Seoul – the home of singer Psy and indeed the now world-recognised ‘style’ – to your airport. The CFO was probably torn between giving an FTWA demanded by the arrival of Korean Air and providing one that reflects the skill and expertise of his crews. The result is therefore confused…an FTWA which could have been perfect…but which could have also reflected the flavour of the destination being started… 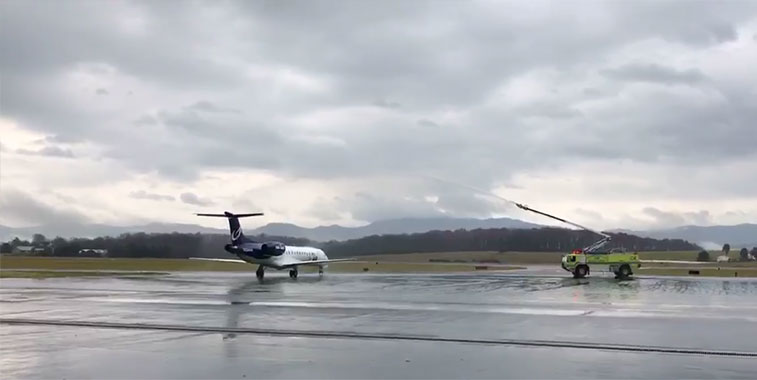 Is this one of those very rare local FTWAs…?

Judge’s comments: Some of you might be looking at this and thinking…there’s only one tender here…what’s going on?? To those people I answer…you are all uncultured oafs! To the trained eye – of which there are eight when it comes to the anna.aero judges – this is instantly recognisable as ‘Shenandoah Soaker’…a very rare FTWA scarcely seen outside this corner of Virginia. It is also known as a Jimmy Stewart – named after the actor who starred in the 1965 American Civil War movie ‘Shenandoah’. 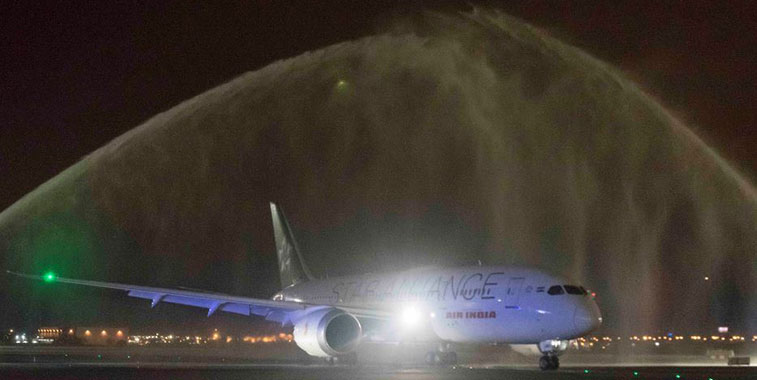 Judge’s comments: Night-time FTWAs can often be treacherous, with poor apron lighting often to blame for a poor image. That type of FTWA would have been particularly bad in Madrid, especially as Air India had flown in its special-liveried Star Alliance 787-8 for the occasion. While the top of the arch could have been a bit neater, both jets are however meeting nicely above the fuselage… 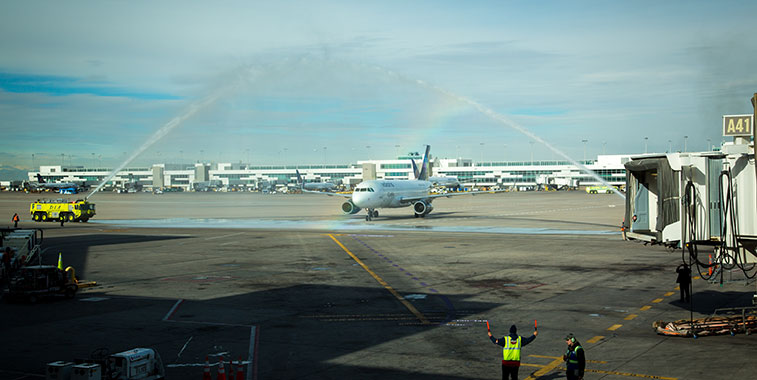 Too much tarmac on display in Denver…

Judge’s comments: I thought Denver was known as the Mile-High City…not the mile-of-apron-concrete-in-front-of-an-FTWA city? That said, with a bit of an FTWA rainbow evident and a well-shaped arch which is not a mile-high over the aircraft, this is not a bad effort from the world’s 19th biggest airport (2015 figures)… 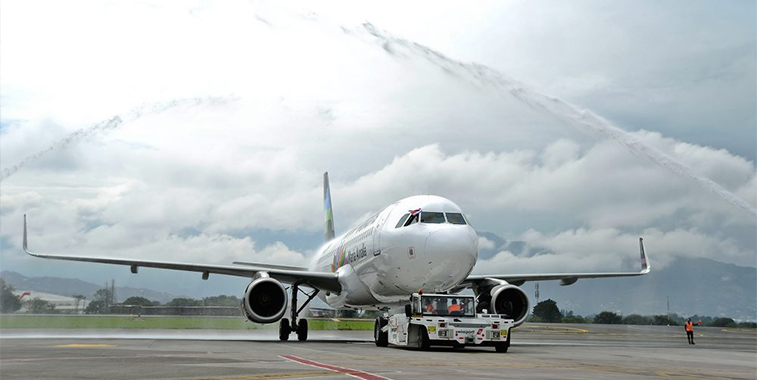 First flight of a brand new airline and you give them this FTWA??

Judge’s comments: A new LCC has decided to start operations from your airport, the least you can get right for it is the send off…surely!! Its not even as if this is the first FTWA that we have had from San Jose (SJO) in Costa Rica, as the airport delivered a creditable 29.3 for another Volaris (the Mexican one) launch in September last year. This was SJO’s moment…and they blew it… 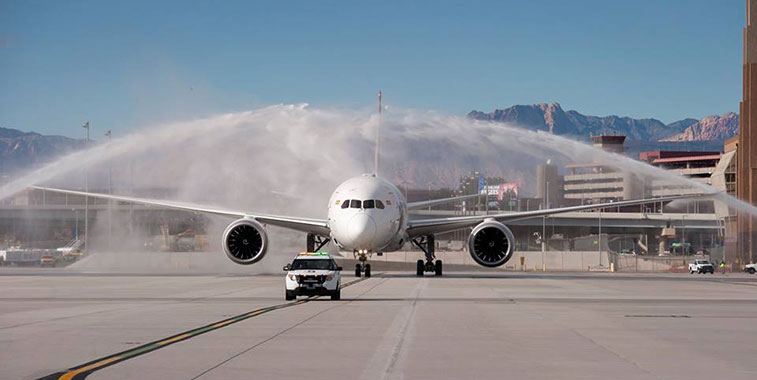 Judge’s comments: FTWA height is absolutely critical when it comes to producing a well-structured arch…the water jets are meant to neatly meet just over the aircraft tail height…which incidentally for a 787-9 is 16.9m (or 55 feet 6 inches for our US cousins)…not about 15m as we are seeing here in Vegas. I’m taking a gamble on this not being our weekly winner…