Sofia-Chicago is “Skyscanner Unserved Route of the Week” with 95,000 annual searches; American Airlines’ next O’Hare service?? 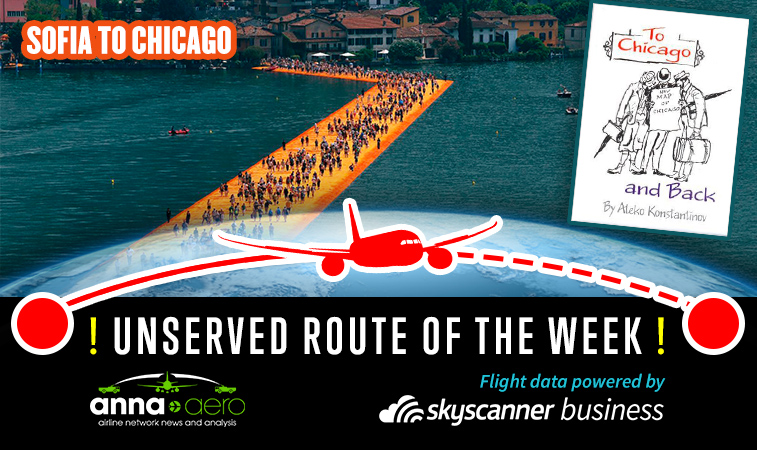 anna.aero assistant editor, Marta Dimitrova, a native of Plovdiv, Bulgaria, edited this article: “Every Bulgarian knows ‘To Chicago and Back’ – a travel book written by Aleko Konstantinov about his epic journey to the US in the 1890s. I can’t understand why it is taking American Airlines so long to start a route that Konstantinov identified the demand for in 1894.” (93,000 people per day walked on ‘The Floating Piers’ by Bulgarian artists Christo and Jeanne-Claude on Lake Iseo, Italy last June – a tiny bit less than the 95,000 Skyscanner searches made every year for a Sofia-Chicago service.)

With nearly 95,000 searches in the last year, a potential new route from Sofia to Chicago has been identified as this week’s “Skyscanner for Business-anna.aero Unserved Route of Week” – a powerful analysis based on aspirational data captured from the Skyscanner.net flight comparison site used by +60 million unique visitors per month. “Different sources say there are about 500,000 Bulgarians living in the US – 150,000 in Chicago, and over 200,000 in Illinois,” says Mariana Kirilova, Aviation Marketing Manager at Sofia Airport. “That makes Chicago the number one indirect US destination out of Sofia.” 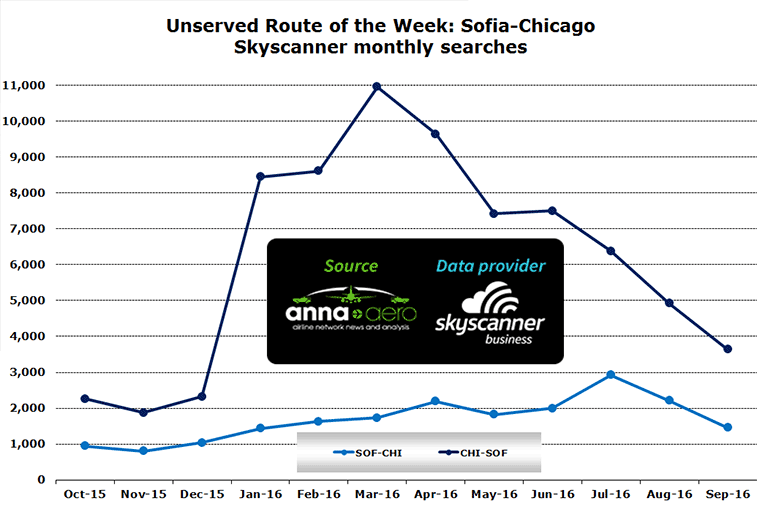 anna.aero recommends United or American for this route

In a massive surprise the Skyscanner demand on this route shows a huge bias in favour of the US end, a 79/21 split, so the potential carriers at Chicago O’Hare (not Midway) were therefore considered first. Chicago O’Hare is a hub to both United Airlines and American Airlines. United is the largest airline with a 45% share of weekly seat capacity, while American commands 35%, according to OAG data for the week commencing 5 December. Neither carrier currently operates any services to Central or Eastern Europe (CEE), nor do they have any services to this region from any of their US bases. Indeed, the only route from the CEE region to Chicago at present is the LOT Polish Airlines’ daily service from Warsaw Chopin. With this evidence in mind, it is clear that the market is chronically underserved and the opportunity for at least one of these US carriers to step into the capacity void is obvious.

Contemplating the Sofia end of the route, the potential carriers at Bulgaria’s main airport were considered next, and it is clear that the airport is currently dominated by ULCCs. Ryanair tops the pile (with 25% of weekly seats), narrowly ahead of Wizz Air (24%). The de-facto national carrier, Bulgaria Air (which is not in any of the major alliances) is currently the third largest airline (17% seat share) in terms of weekly capacity. However, at this time it only has short-haul aircraft in its fleet – two A319s; three A320s; one 737-300; and four E190s (according to ch-aviation). On that basis, it would seem unlikely that an operation from the Bulgarian end of this potential city pair is imminent. Reflecting on the US-led demand shown by Skyscanner, Kirilova continues: “Over 50% of the passengers flying currently from Sofia to Chicago are Bulgarian nationals living in the US. They would definitely visit their families more often if there was a [cheaper] non-stop flight…and grandmas who live in Bulgaria would be happy to embrace their ‘American’ grandchildren if they could take a plane in Sofia and land at O’Hare.”

When looking at the previous year of search data, the busiest month for potential traffic flows (for both directions on the route combined) is March 2016, with nearly 13,000 searches, over 10,000 higher than the lowest monthly figure, which was recorded in November 2015 (2,700 searches). The seasonality profile of this search data is significantly more extreme than the last Unserved Route of the Week (Aruba to Milan) with the low-month traffic representing 21% of the highest month. According to OAG Traffic Analyser, because there is no direct service, the top three connecting options chosen by those passengers who did book travel between Sofia and Chicago in the past year indicates that the majority of connecting travellers use Munich (17%), Frankfurt (13%) – indicating that Star Alliance Lufthansa is grabbing 30% of the market, trailed by Sky Team-hub Amsterdam (12%). Looking at traffic flows in the opposite direction, the top three connecting airports are slightly different, with Frankfurt now top (16%), Berlin in second (15%) and Vienna in third (12%).

With a lack of direct services, travellers between these two cities have clearly got used to one-stop alternatives – as suggested above. However, the market demand is extremely buoyant – as the graph below shows, with over 6% of the Skyscanner searches for these indirect Sofia to Chicago services converted into ticket sales – that’s more than the average 4.5% achieved for Skyscanner conversion/purchase rates for all direct routes available from either Sofia or Chicago. “With a big Bulgarian diaspora in the US, it would be ideal if an American carrier would make note of this potential route. American tourists will be charmed by the beauty of Bulgarian nature and the friendliness of the local people,” concludes Kirilova. 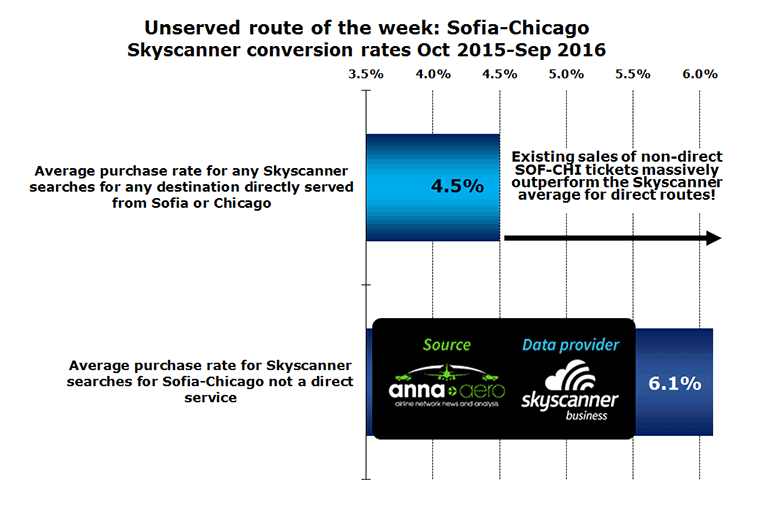