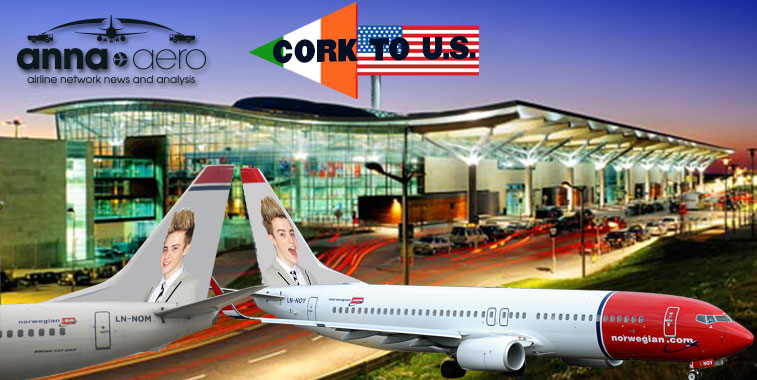 Back in September last year, we revealed Norwegian’s plans to fly 737-operated US routes from Cork, along with its plans to add awesome Jedward tail fins (not likely). Cork, and fellow Irish airport Shannon, both now stand to benefit from this week’s news that Norwegian Air International, the Irish-based subsidiary of Norwegian, has finally been awarded a foreign air carrier permit which will allow it to use EU traffic rights to grow its transatlantic route network. The LCC has increased its ASKs to the US by 73% in the last 12 months, seeing it jump from 39th largest carrier to 23rd in terms of international ASKs to and from the USA – clearly there is now more growth to come.

Two recent announcements appear to have upset some US airlines and various organisations seeking to protect the interests of US airlines and their employees. On 3 December the US Department of Transportation (DOT) finally awarded a foreign air carrier permit to Norwegian Air International, the Irish-based subsidiary of Norwegian, which will allow it to use EU traffic rights to grow its transatlantic route network. A few days earlier Qatar Airways had restated its intention to start serving Las Vegas, its 11th destination in the US, though no specific start date has been identified. Both of these carriers have been growing quickly in the US market in recent years.

anna.aero decided to look at where these carriers rank on international routes to and from the US. But rather than use flights or seats as the metric, we have chosen ASKs, which is a better proxy for revenue as it takes into account the number of seats offered and sector length. Not surprisingly the three US legacy carriers take the first three places with United Airlines beating American Airlines and Delta Air Lines. However, all three appear to be cutting international capacity compared with last winter, by between 3% and 6%. Despite this they still account for 33% of all ASKs on international flights from the US. Only one other US carrier makes the top 15, JetBlue Airways in 12th place, and it too is cutting international capacity this winter by around 2%. 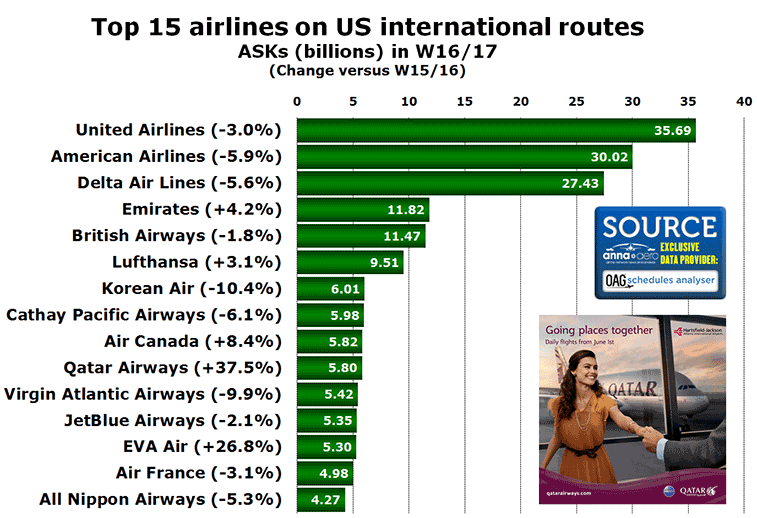 Just outside the top 15 are Qantas, Japan Airlines and Turkish Airlines. Another of the MEB3 carriers, Etihad Airways, has actually fallen from 18th place in W15/16 to 20th in W16/17 with a 19% cut in US ASKs, a combination of a 5% cut in flights and a downgauging of aircraft type on some routes. Meanwhile Norwegian, which ranked just 39th in W15/16, has jumped to 23rd in W16/17, courtesy of a 73% growth in its ASKs.

Doing a similar analysis by country confirms the importance of the UK market, which is 50% bigger than the Chinese and Japanese markets – these two Asian markets have swopped places this winter for second and third position. Maybe surprisingly the UAE has dropped a place, from fifth to sixth, with Mexico moving up a spot. Qatar breaks into the top 15 thanks to Qatar Airways’ growth, while EVA Air’s expansion has helped Taiwan move up a couple of places. The economic difficulties in Brazil have seen that country drop from 9th to 13th place.

Despite significant expansion by Aer Lingus resulting in 18% growth in the Irish market, the Emerald Isle ranks just 24th by ASKs, behind Argentina, India, Italy, Spain and Turkey. Norway, home of Norwegian, ranks just 47th out of the 100 country markets served non-stop from US airports this winter. 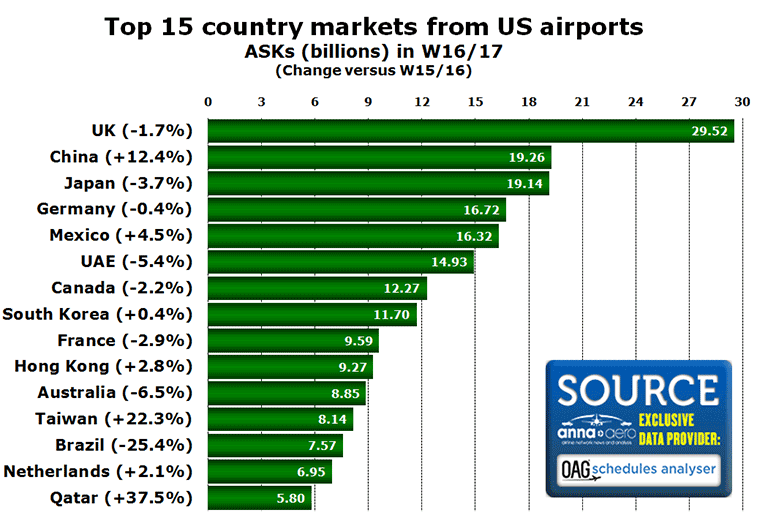 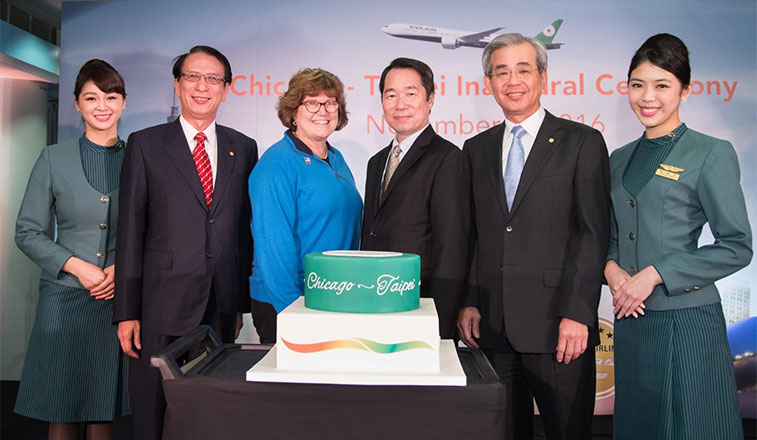 EVA Air’s new service to Chicago O’Hare from Taipei, which launched in early November, has helped make the airline the 13th biggest in the US international market (by ASKs) and helped propel Taiwan up to 12th among the biggest country markets from the US (also by ASKs).