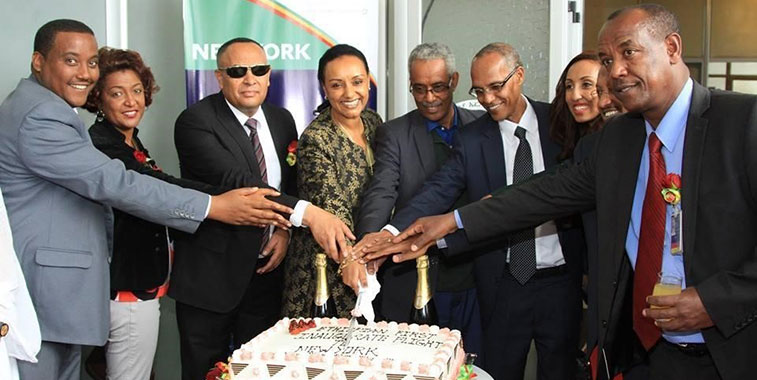 Ethiopia’s #1 airline is unsurprisingly the national carrier Ethiopian Airlines. The Star Alliance member launched a three times weekly service to New York Newark from Addis Ababa (via Lomé), its third US destination in July. As all of its US services are flown via an intermediate point, with Washington Dulles and Los Angeles operated via Dublin, the US does not feature in terms of the African nation’s top country markets.

Ethiopia is Africa’s second largest country in terms of population, after Nigeria. With over 86 million inhabitants it is the most-populous landlocked country in the world. It occupies a total area of 1,100,000 square kilometres – which makes it approximately twice the size of Spain. Its largest city and indeed its capital is Addis Ababa. It is home to Ethiopian Airlines, which, when ranked by passenger traffic, was the 69th largest airline in the world in 2015 – making it Africa’s biggest airline, ahead of South African Airways in 78th.

Double-digit boom continues throughout the 2010s

There is no doubt that there has been robust growth in Ethiopia over the past 10 years, with only one year (2008) delivering an annual increase in Available Seat Kilometres (ASKs) below 10%, and even that result was only missed by 0.6%. While schedules for next year are still likely to be subject to some revisions, indications at this stage show that this trend is likely to continue in 2017, with annual ASKs up 14% to 24,225 million. 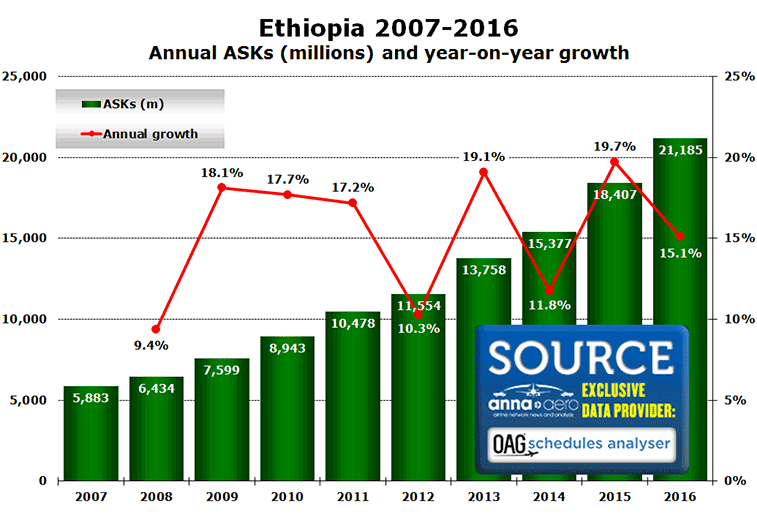 The domestic market is the largest market flown from Ethiopia, and in the last 12 months it has grown by 36%. A total of 55 country markets are served non-stop from the African nation, which is up from 52 in December 2015. Added to the non-stop country market roll call has been Côte D’Ivoire, Burkina Faso, Burundi, Malta and Comoros Islands, but with the loss of Brazil and Spain, both of which are now served with one-stop operations. Indeed, the total number of country markets served direct and one-stop from Ethiopia rises to 67. Highlighted in light green, Ireland is the only European country in the top 12 – with the UK 14th, Germany in 17th, and France in 20th – this position is driven by the fact that Ethiopian Airlines’ services to Washington Dulles, Los Angeles and Toronto Pearson route through Dublin the Irish capital. 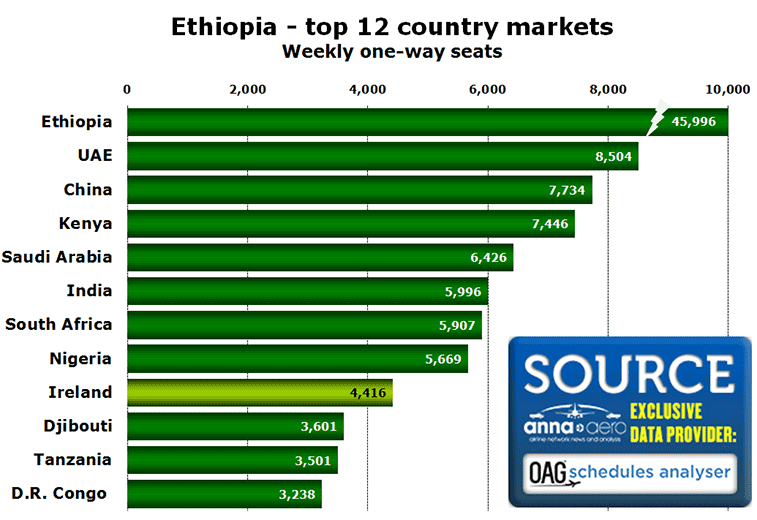 Of the top 12 country markets flown from Ethiopia, the fastest growing is South Africa with a 93% increase, seeing it rise from 12th spot to seventh. With a similarly robust improvement in weekly capacity is India, which has provided a 48% spike in seats since last December. While capacity to Uganda has actually grown year-on-year, it has been ousted from the top 12 by Djibouti, which posted a 28% increase to rise from 13th last year to 10th in these rankings. Three country markets have witnessed weekly seat declines, led by Tanzania (-9.7%), and followed by Nigeria (-9.0%) and China (-3.7%).

This December, Ethiopia has 13 serving airlines, with new entrant Caspian Airlines unable to make-up for the loss of Air China, Sudan Airways and FlexFlight over the last 12 months, which are no longer offering non-stop flights according to OAG schedules data. With an additional 819 weekly seats, representing a 49% increase, MEB3 carrier Emirates is the fastest growing airline in Ethiopia when comparing this week’s capacity to the same week last year. Fourth-placed Kenya Airways, which was last December’s second biggest airline in terms of weekly seats, is the only carrier in the top 12 to produce a capacity decline, down by 19%. 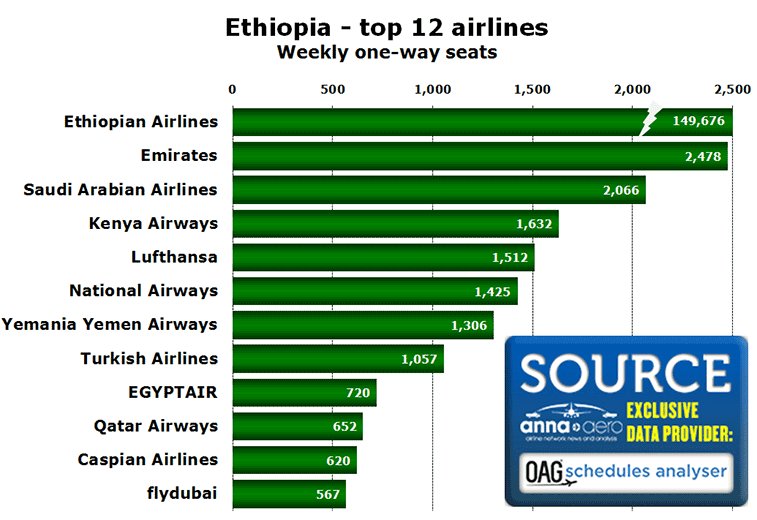 Looking ahead to 2017 and any new services in the pipeline to/from Ethiopia, according to anna.aero’s New Route Database Ethiopian Airlines will start five times weekly service to Conakry in Guinea (via Abidjan) in February 2017, as well as Oslo Gardermoen (via Stockholm Arlanda) and Victoria Falls in Zimbabwe in March. Later in the summer it will start flights to Singapore with a daily 787-8 service, and three times weekly operations to Jakarta and also Chengdu (both via Bangkok). 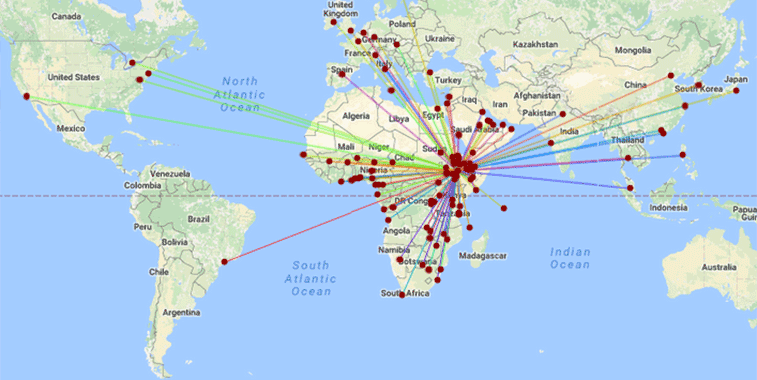 Ethiopia is well connected, with 55 country markets offering on non-stop flights. As seen above this number rise to 67, when one-stop services are considered, with markets like the US, Canada and Brazil then coming online.