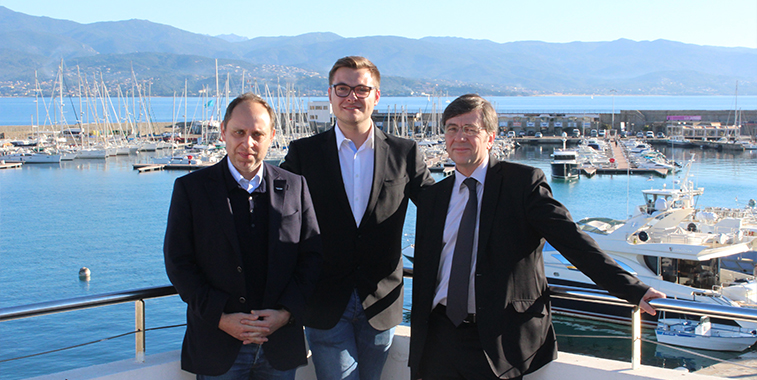 Air Corsica is based at Ajaccio Airport in Corsica, and it is the ‘national’ carrier of the island, although Corsica is part of France. The airline is the host carrier for next year’s CONNECT conference which will be taking place in Ajaccio between 22-24 February at Palais des Congrès d’Ajaccio. In order to further assist delegates in getting to Ajaccio, the airline has organised a charter flight from Paris CDG, allowing those attending the event to get to the island much more effectively. The flight will leave CDG’s Terminal 2F on 21 February at 15:50, getting into Ajaccio at 17:35. With the show finishing on a Friday, delegates will be able to get back to CDG on the airline’s scheduled service that day.

In order to discover more about the airline that serves Corsica, anna.aero’s Assistant Editor Jonathan Ford flew out to Ajaccio, meeting up with Hervé Pierret, Member of the Management Board at Air Corsica. Last year the airline flew 1.7 million passengers according to Pierret on its 11 aircraft which is made-up of five A320s and six ATR 72-500s. “As it is currently the winter season, we have less demand for passengers between Corsica and mainland France, so at the moment one aircraft is on lease in Serbia,” comments Pierret. The ATRs were purchased for €100 million in 2005 in an agreement with the aircraft being operated under an Air France-KLM franchise.

This winter Air Corsica is operating 15 routes between the Mediterranean island of Corsica and mainland France on 153 weekly flights across a network of 10 airports. The number one route in relation to ASKs (Available Seat Kilometres) is the link between the airline’s main hub and Paris Orly. The connection to the French capital’s second largest airport from Ajaccio accounts for over 27% of its ASKs this winter, while second-placed route, Bastia – Orly, takes up a little over 26%. “In winter operations to Nice are all flown on ATRs, with Marseille flown on a mixture of our aircraft, with about 70% operated on A320s. Orly and CDG are sole A320 operations, due to the distance to Paris, with routes to Lyon and Toulouse flown on the ATRs in winter and A320s in summer,” highlights Pierret. It should be noted that the airline’s route to Orly, Marseille and Nice operate in conjunction with Air France, with some of the links operating as PSO routes. 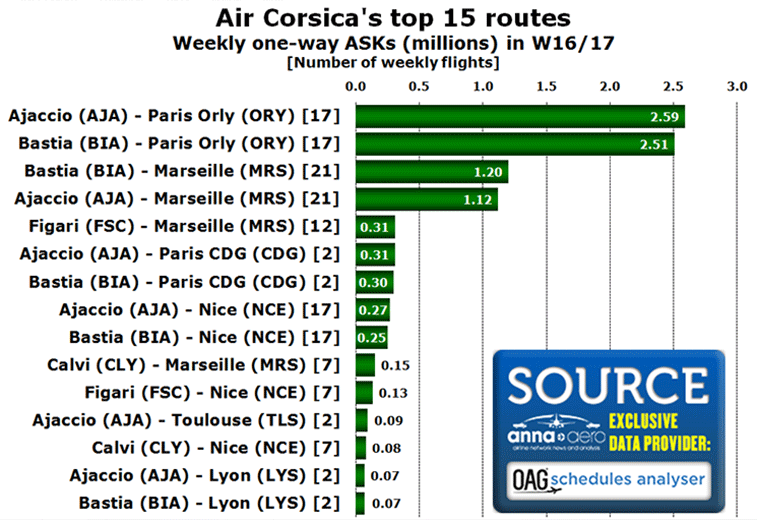 For the upcoming summer season Air Corsica will be going international with its first scheduled services outside of France in recent years, with links from Ajaccio and Bastia to Brussels Charleroi. Both routes will initially be flown to the Belgian capital airport twice-weekly, with flights from Ajaccio operating on Thursdays and Sundays and Bastia on Wednesdays and Saturdays. Both connections will be operated on the airline’s A320 fleet with the first flight, from Ajaccio, launching on 26 March. The twice-weekly frequency from Bastia will increase to five times weekly in peak S17, with Ajaccio going to four times weekly. From 2 July the airline will inaugurate flights to Bordeaux, with Air Corsica linking the city with Ajaccio and Calvi. Both routes will be flown on Wednesdays (ATR 72 operation) and Sundays (A320), with the Calvi link being operated on a w-pattern rotation according to latest schedules (Ajaccio – Bordeaux – Calvi – Bordeaux – Ajaccio).

Ajaccio is number one in winter – Orly largest in summer

Ajaccio is the carrier’s number one airport, and this winter Corsica’s largest airport is home to a little under 23% of the airline’s weekly seat capacity. Following close behind Ajaccio is Marseille, with it having just over 21% of seats. Bastia sits in third with 0.4% less seats than Marseille. The airline’s smallest operation this winter is Lyon, with it occupying just 0.9% of the carrier’s capacity.

Looking ahead to next summer, the airline’s number one airport is Orly, with it climbing from fourth this winter where it has a 16% share of seat capacity. In S17 current schedules indicate that the French capital airport will occupy nearly 21% of Air Corsica’s departing seat capacity, with Ajaccio dropping to second place with a little under 20% of seats. Overall, Air Corsica’s weekly seat capacity will be 57% larger than its weekly capacity in W16/17. 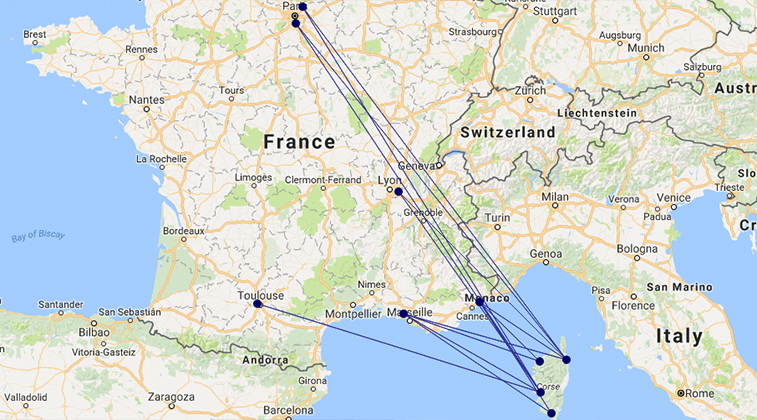 This winter Air Corsica is operating 15 routes between the island of Corsica and mainland France on 153 weekly flights. For S17 a further two airports will be joining Air Corsica’s route map, Bordeaux and Brussels Charleroi, with the latter becoming the airline’s only international destination. It will link the Belgian airport with Ajaccio and Bastia.

One of the questions that anna.aero had for Air Corsica was about its fleet utilisation, as during the winter season some are leased to other airlines. “We are always looking at the possibility of more international links, and throughout the year we do operate multiple scheduled charters to destinations around Europe,” confirms Pierret. “We try and look into ways to develop our A320 fleet and the international market is certainly a market we are looking into. We know that there is an international market to be tapped into from Corsica, and we see this from the summer demand where we lose a heavy amount of our market share to other carriers.” When quizzed by anna.aero on what markets are being considered by Air Corsica, Pierret replied: “Looking at our current passenger demographic, around 40% of those are connecting onto international destinations through Air France, with North America, Canada, UK and Scandinavia being popular final destinations. This is why we are excited to see Ajaccio host CONNECT in February, as it will allow us as an airline to meet with airports from across Europe to discover and look into international ventures, and to create new relations with multiple airports.” Looking over Ajaccio Harbour are Ford and Pierret. Visible from the rooftop of the Palais des Congrès d’Ajaccio is the city’s airport, which last year welcomed over one million passengers. With the airport only being seven kilometres from the city centre, it allows for a short transfer for delegates arriving in the city for next year’s CONNECT.