Bergen-Hamburg is “Skyscanner Unserved Route of the Week” with 30,000 annual searches; Eurowings’ next Norwegian city? 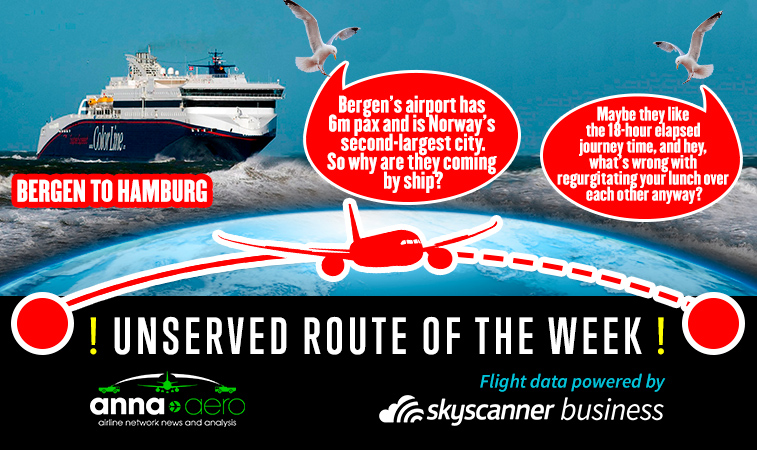 While loads of tourists arrive in Bergen from Hamburg every year via ferry, 30,000 would-be travellers are searching Skyscanner looking for a direct flight. Add that to those searching directly on the airline sites and other sources and it’s not hard to think of a much bigger number looking for this unserved route. With 80% of air travellers having to make their way to Hamburg over SAS hubs, anna.aero thinks this is a great service for a competitor such as Eurowings or Norwegian.

With nearly 30,000 searches in the last year, a potential new route from Bergen to Hamburg has been identified as this week’s “Skyscanner for Business-anna.aero Unserved Route of Week” – a powerful analysis based on aspirational data captured from the Skyscanner.net flight comparison site used by +60 million unique visitors per month. “Germany is an important market for incoming tourism to Bergen – with nearly 60,000 German bed nights per year,” says Ingrid Helgesen, Manager Route Development at Bergen Airport. “Hamburg has always been a reliable supplier of great-spending tourists for our region ‒ it’s a very strong market. Today big streams of tourists arrive in Bergen from Hamburg by ferry, so in addition to Skyscanner’s numbers, there is a wider market to take from for this route,” adds Helgesen. 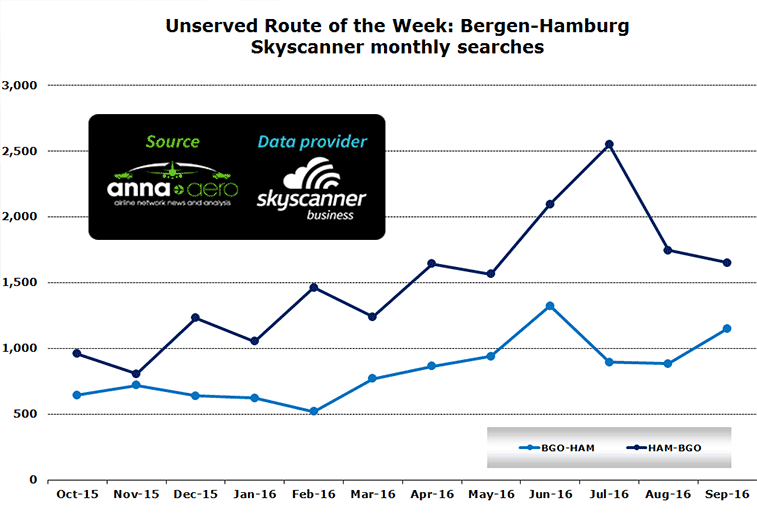 The Skyscanner demand on this route shows a significant bias in favour of the German end, a 64/36 split, so the potential carriers at Hamburg were therefore considered first. The German airport is dominated by Lufthansa and its partner airlines germanwings and Eurowings (both still operate under separate codes), controlling 40% of weekly seats when combined, according to OAG data for the week commencing 13 December. At the moment, the parent company itself does not operate any services to Norway from Hamburg, choosing to let Eurowings (10 weekly flights) and germanwings (twice-weekly) fly its schedules to Oslo Gardermoen. However, while Lufthansa does fly in its own colours from Frankfurt (four times daily) and Munich (three times daily) to Oslo, it does not presently link either of these hubs to Bergen. With this evidence in mind, it is clear that if Bergen is going to be served from Hamburg, a new route is most likely to be flown by Eurowings/germanwings.

The third-largest carrier at Hamburg is airberlin, with a 10% share of weekly capacity. However, its current network of 11 destinations from Hamburg (its fifth biggest airport in terms of weekly seats) is a mix of domestic and sunshine routes to the Mediterranean. On this basis a link to Bergen is perhaps off the radar for the oneworld carrier at the moment.

Considering the Bergen end of the route, the potential carriers at Norway’s second biggest city were contemplated next, and it is clear that the airport is currently dominated by SAS and Norwegian. The pan-Scandinavian legacy carrier tops the pile (with 39% of weekly seats), narrowly ahead its arch rival pan-European LCC with 34%. Of SAS’ seven routes presently operated from Bergen, four are domestic, two are to other SAS hubs – Stockholm Arlanda and Copenhagen – leaving Manchester as the only other international route. Norwegian has a broader network from Bergen than SAS, serving 11 city pairs, including one in Germany, a three times weekly service to Berlin Schönefeld. As the LCC also flies twice-weekly to Hamburg from Gardermoen, it would therefore not be out of the question for it to take on this potential route.

When looking at the previous year of search data, the busiest month for potential traffic flows (for both directions on the route combined) is July 2016, with over 3,400 searches, nearly 2,000 higher than the lowest monthly figure, which was recorded in November 2015 (1,500 searches). The seasonality profile of this search data is less extreme than the last Unserved Route of the Week (Sofia to Chicago) with the low-month traffic representing 44% of the highest month. According to OAG Traffic Analyser, because there is no direct service, the top three connecting options chosen by those passengers who did book travel between Bergen and Hamburg in the past year indicates that the majority of connecting travellers use Copenhagen (49%), Gardermoen (33%) and Amsterdam (16%). In total there were 10 airports which provided connecting options to potential passengers between the two cities.

With a lack of direct services, travellers between these two cities have clearly got used to one-stop alternatives – as suggested above. However, the market demand is extremely buoyant – as the graph below shows, with over 6% of the Skyscanner searches for these indirect Bergen to Hamburg services converted into ticket sales – that’s more than the average 5.3% achieved for Skyscanner conversion/purchase rates for all direct routes available from either Bergen or Hamburg. “In addition to being Gateway to the Fjords of Norway – the news from Bergen is that we are now emerging as a ‘fly cruise’ destination. As well as Hurtigrutens daily cruise departures from Bergen to the north of Norway, Viking Cruises is also expanding its business – and already expects to attract 33,000 tourists to Bergen with operations between April and October 2017,” concludes Helgesen. 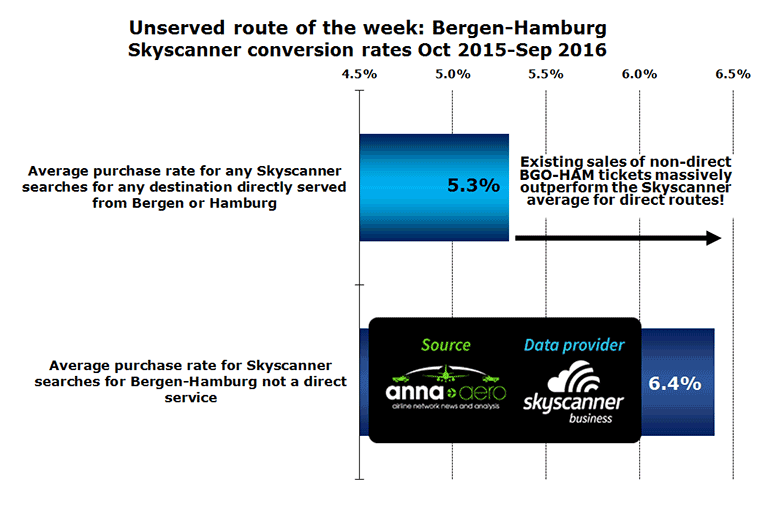