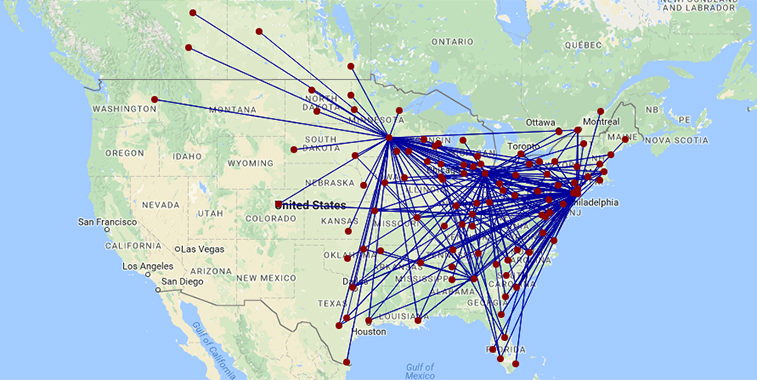 Endeavor Air’s route map for W16/17. The airline operates to a total of 105 airports this winter utilising 124 aircraft, made-up of 43 CRJ 200s and 81 CRJ 900s. Its main hubs are Minneapolis-St.Paul, Detroit, and New York’s LaGuardia and JFK airports. Combined these four hubs account for 44% of the airline’s weekly departing seat capacity this winter.

Endeavor Air is an American regional airline that operates as Delta Connection for Delta Air Lines. It operates a fleet of 124 aircraft according to ch-aviation, which is made-up of 43 CRJ 200s with an average age of 12.6 years, and 81 CRJ 900s with an average age of around 5.6 years. The carrier’s main hubs are Minneapolis-St. Paul, Detroit, and New York’s LaGuardia and JFK airports, with these four combined offering nearly 44% of the regional carrier’s weekly departing seat capacity this winter.

Detroit is number one airport…just

Detroit is the largest of the 105 airports which Endeavor serves, with the Michigan facility occupying just under 12% of the airline’s weekly departing seat capacity this winter. The airline itself is the second largest carrier at Detroit after mainline Delta, with it occupying 8.5% of the airport’s winter seat capacity. The mainline carrier holds the majority of seats from Detroit this winter, standing at 47%.

If we took all airlines operating for Delta at Detroit in W16/17, combined they occupy 72% of seats from the airport. Overall Endeavor’s weekly seat capacity from its largest airport operation has shrunk by nearly 17% during the past year when referring to OAG schedules. LaGuardia is poised to overtake Detroit to become the airline’s number one hub in the not too distant future, with it having reported a 53% rise in weekly seat capacity during the past 12 months. 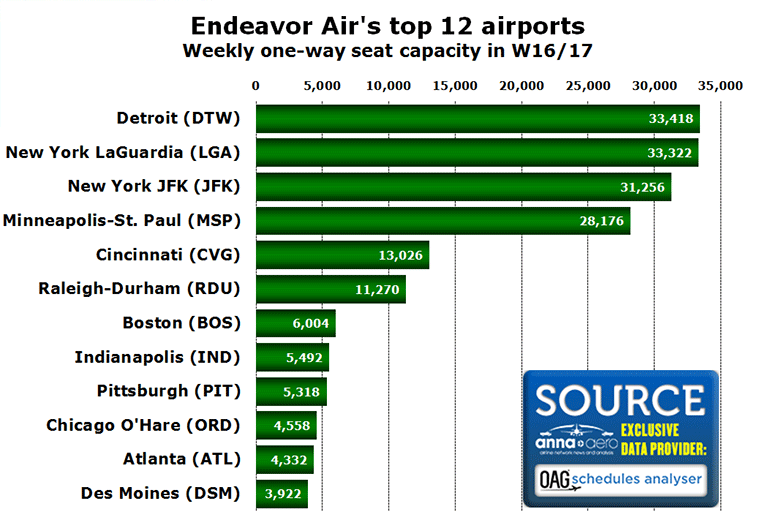 The number one route for Endeavor is the 300-kilometre link between JFK and Boston, where it offers around 2,400 weekly one-way seats. However, the airline operates just under 46% of Delta’s capacity between the two airports, with Delta mainline operating the remainder. Overall Endeavor operates 19% of capacity between the two airports, with Delta offering 23%. The leading carrier on the airport pairing is JetBlue Airways with 46% of seats, while American Airlines sits behind Endeavor by operating just 12%. 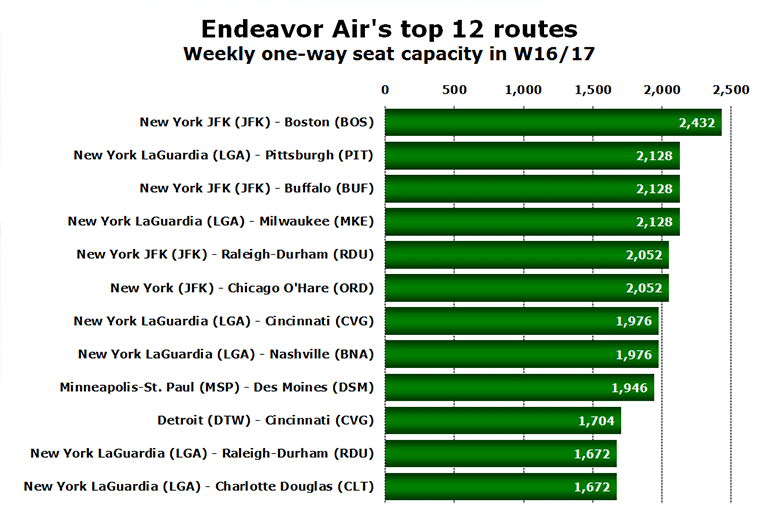 Looking at OAG schedules Endeavor is operating 233 routes this winter. What is surprising is that although it is Endeavor’s number one airport, only one of the 63 connections flown by the carrier this winter from Detroit sits in the airline’s top 12 routes, with that being the sector to Cincinnati. LaGuardia is the leading hub when it comes to the top 12, with six of its connections making it into the rankings. From JFK, Endeavor operates to 30 destinations, with the four routes from the New York hub that make it into the top 12 – Boston, Buffalo, Raleigh-Durham and Chicago O’Hare – making up 27% of the airline’s weekly seat capacity from the airport this winter. Endeavor also operates 39 routes from LaGuardia, of which 19 are also served from JFK by the carrier, while Minneapolis-St. Paul is linked to 56 destinations. 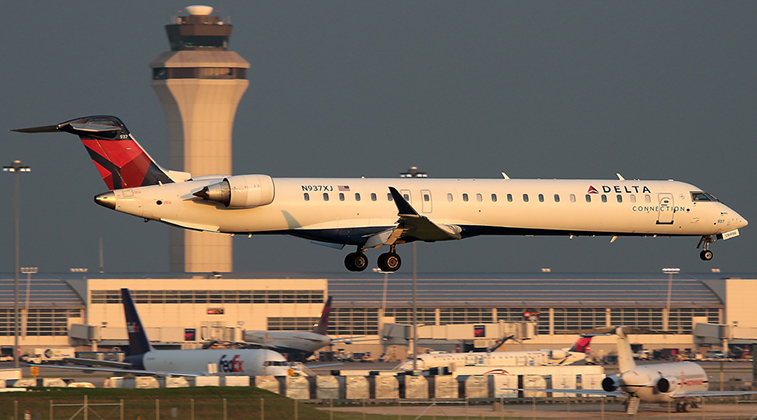 Seen landing in Detroit is one of Endeavor Air’s 81 CRJ 900s. Detroit is the largest hub for Endeavor Air, occupying a little under 12% of its weekly seat capacity. This winter the airline is operating some 63 routes from the Michigan airport.