Brussels Airlines set to become part of Eurowings empire by 2018; can a hub-and-spoke carrier fit into the Eurowings point-to-point model? 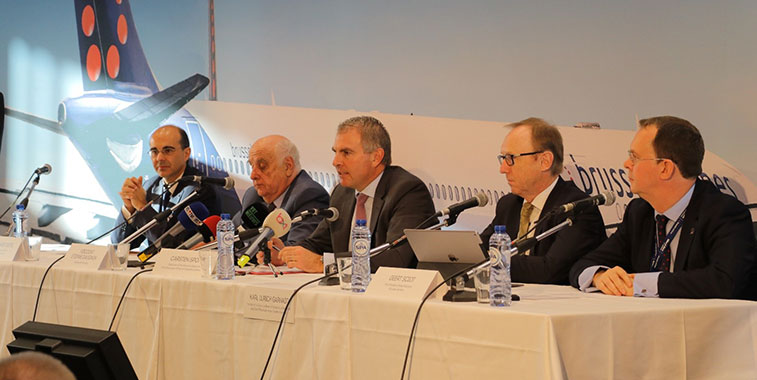 The announcement last week that Brussels Airlines would be fully integrated into the Lufthansa Group and join the Eurowings Group raises some interesting questions about the airline’s future network strategy. According to OAG schedule data for 2016, Brussels Airlines accounts for 36% of seats and 39% of flights from its home base in Brussels, with the next biggest carriers being Ryanair (9.9% of seats), Jetairfly (5.9%), Lufthansa (4.6%), easyJet (3.5%) and Vueling (2.9%). Brussels Airlines’ fleet comprises over 40 narrow-body aircraft (mostly a mix of A319s, A320s and Avro RJs) and nine long-haul A330s. The airline’s network covers almost 80 destinations in Europe and 23 long-haul destinations in Africa and North America.

The airline’s network strength is its range of destinations in sub-Saharan Africa. Analysis of the airline’s ASKs (Available Seat Kilometres) on routes from Brussels in 2016 reveals that fully 35% of ASKs are accounted for by African routes, while 47% of ASKs are on routes within Europe. Therefore 82% of ASKs are allocated to African and European routes. A comparison with the four biggest hub carriers in Northern Europe reveals that they allocate less than 30% of their ASKs across these two markets; 26% for Lufthansa in Frankfurt, 28% for British Airways at London Heathrow, 29% for KLM at Amsterdam and 30% for Air France at Paris CDG.

However, while over one third of Brussels Airlines’s ASKs are on African routes, all four of the other carriers in the table above offer more ASKs from their hubs to African destinations, with Air France offering almost four times as many ASKs in 2016. In terms of total network ASKs Brussels Airlines is only around one-eighth the size of Air France, British Airways and Lufthansa and about one-sixth the size of KLM in nearby Amsterdam (just 160 kilometres from Brussels).

As measured by ASKs (which is a much better proxy for revenue than just seats) the airline’s top 20 routes are dominated by routes to North America and Africa. The two US routes to New York JFK and Washington Dulles just beat off the biggest African routes (shown in bright green). Nine of the top 15 routes are to Africa, with Malaga the only European airport in the top 10. 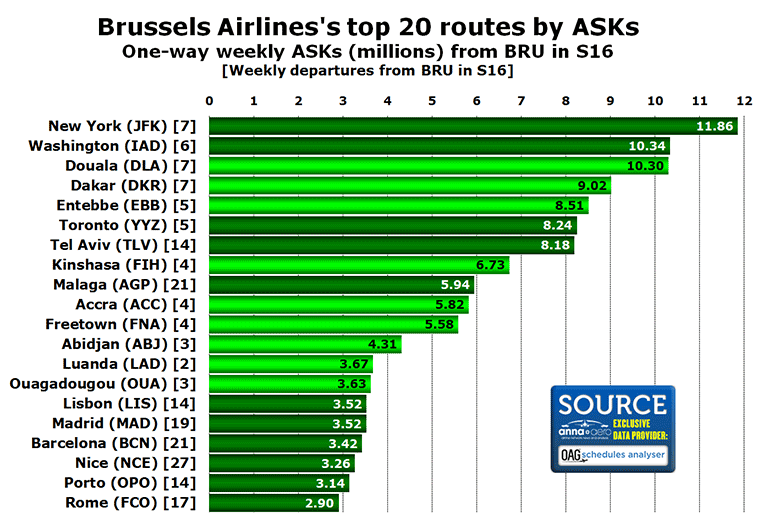 When asked by anna.aero the airline confirmed that overall some 40% of its passengers are connecting through Brussels with the figure higher for long-haul routes. These connecting passengers are obviously critical for the viability of these African routes, but is this model compatible with how Lufthansa sees the evolution of the airline? In the airline’s press release covering the recent announcement, Carsten Spohr, Chairman of the Board and CEO of the Deutsche Lufthansa AG is quoted as saying: “Based on its successful development, Brussels Airlines is able to play a leading role in bringing our pan-European point-to-point offer under the brand of the Eurowings Group to new successful heights.” The key phrase there is “point-to-point” which is definitely not the current Brussels Airlines business model.

Many of the African destinations served by Brussels Airlines are served either with an intermediate stop in both directions or as part of a triangle routing (meaning that either the outbound or return flight will have an intermediate stop). The following table looks at the African destinations which have non-stop service to Brussels with Brussels Airlines this summer and reveals which other European carriers connected these African airports with their own bases using non-stop flights and with what frequencies.

Brussels Airlines faces considerable competition on most of these routes from other European hub carriers, notably Air France and Turkish Airlines. Brussels Airlines’s network is heavily focussed on Europe and Africa with just three North American routes (New York, Toronto and Washington) and one in the Middle East (Tel Aviv). A closer look at the airline’s African network reveals just how many triangle routes the Star Alliance member operates to serve 17 cities in sub-Saharan Africa.

On European routes competition has increased in recent years with Ryanair and Vueling both opening bases in Brussels, Ryanair in February 2014 and Vueling in May 2014. Both carriers compete with Brussels Airlines on routes to Alicante, Barcelona, Ibiza, Lisbon, Malaga and Porto. In addition easyJet competes with Brussels Airlines on routes to Basel, Bordeaux, Geneva, Milan Malpensa, Naples and Nice.

Passenger numbers up 6% since May

The terrorist attack at Brussels Airport on 22 March had a significant impact on passenger numbers at Brussels Airlines in both March and April, but impressively year-on-year traffic was growing once again in May. Since then scheduled passenger numbers have grown by just under 6%, suggesting that for the year as a whole the airline is on track to carry some 7.7 million passengers, a new record, despite the setbacks of earlier in the year. In July, August and September passenger load factors exceeded 80%, though the average for the year as a whole is set to be around 75%.

Looking further ahead Brussels Airlines has already announced plans to start year-round services next year to Funchal on the Portuguese island of Madeira, Mumbai in India and Yerevan in Armenia. New seasonal services will also be launched to Comiso in Italy, Palma de Mallorca in Spain and Rhodes in Greece. 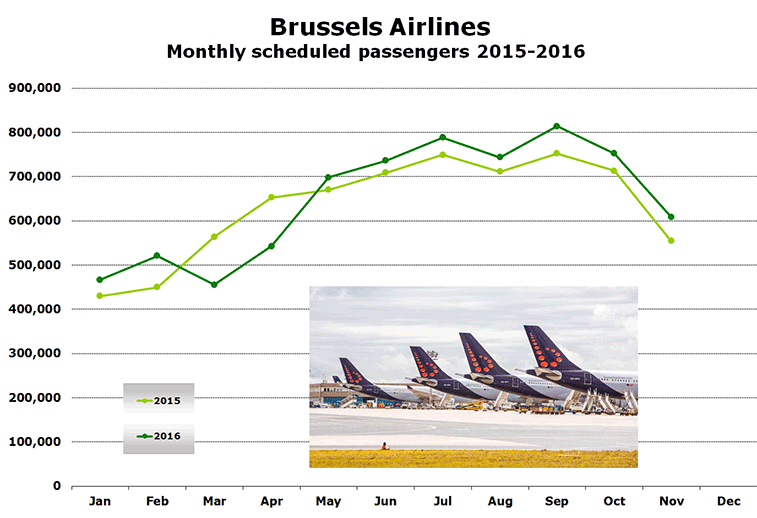 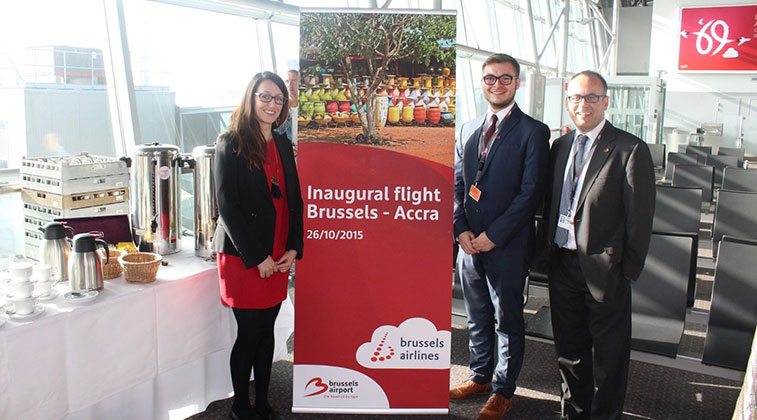 anna.aero’s very own roving Assistant Editor, Jonathan Ford (centre) was on hand to help Brussels Airlines and Brussels Airport celebrate the launch of services to Accra in Ghana at the start of the W15 season in October 2015.