Deliveries in the 11th month of 2016 for Airbus and Boeing equaled 125 units, taking the collective total for both manufacturers between January and November to 1,258 aircraft. At this point in 2015 the combined total was 1,261, meaning that the joint production of both companies is three units worse for the same 11-month period of 2016. Looking back to the time between January and October, both combined had a four-unit gain over the same 10 months of the year before, therefore revealing that production in November slowed. That is indeed the case, with anna.aero’s records showing that in November 2015 Airbus and Boeing together distributed 132 units, seven more than November 2016. However, the total of 125 aircraft deliveries in November was 17 units more than October.

Boeing has yet again strengthened its lead in the 2016 delivery race over Airbus to 104 units, up from the 101 advantage it had at the end of October. The European giant handed over 61 aircraft in November, while its US rival managed 64. In relation to the distribution of narrow-body and wide-body aircraft for both manufacturers, 77% of deliveries were single-aisle (96 units), with the remaining 23% wide-body (29).

Airbus ended November with a total of 61 unit deliveries, seven more than in October and equal to what it delivered in the corresponding month of 2015. For the 11th month of 2016, single-aisle unit deliveries were led by the A320 (30 units), followed by the A321 (18). This means that a total of 48 single-aisle units were distributed by Airbus in November. It’s also the ninth consecutive month during 2016 when Airbus has either delivered more, or matched the total of single-aisle unit deliveries of Boeing. A total of 23 airlines welcomed the A320 in November, five more than October. The largest recipient of the type was easyJet, with it collecting three. Azul Airlines, Batik Air, Eurowings, Frontier Airlines and IndiGo each collected two. Air Astana welcomed its first A320neo in November. The aircraft, leased from Air Lease Corporation, is part of a deal announced at the Farnborough Airshow in 2015 for 11 A320neos. “The A320 family has proven to be a success in service with Air Astana over the past 10 years, for its passenger appeal, low operating costs and reliability,” said Peter Foster, President and CEO of Air Astana.”The A320neo offers significant improvements to passenger comfort, fuel efficiency and operating capability, particularly on longer range routes to Asia and Europe.” In relation to A321 deliveries, 13 carriers welcomed the type, with American Airlines, China Eastern Airlines, Delta Air Lines, JetBlue Airways and Volaris being the largest recipients with each collecting two into their respective fleets.

In relation to the wide-body market, Airbus handed over 13 units in November, one more than it distributed in October, but one less than November 2015. The wide-body market for Airbus was led by the A330-300, with the company handing over five. The largest recipient of the -300 variant was Saudi Arabian Airlines, with it welcoming two. Air China, RwandAir and South African Airways each collected one. Following the A330-300 as the second most popular wide-body Airbus aircraft in November was the A350 with four unit deliveries, followed by the A380 and A330-200, with two of each type being handed over to clients. 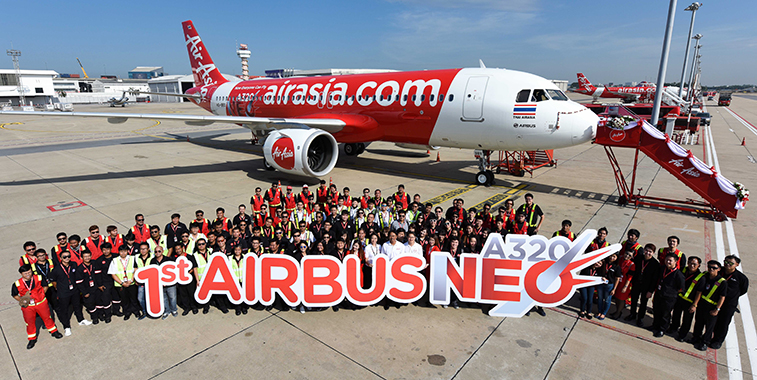 Along with Air Astana, another airline to welcome its first A320neo in November was AirAsia, with the first destined for Thai AirAsia. Preechaya Rasametanin, EVP of Thai AirAsia, said the airline is very proud to welcome the 50th member of its fleet, which is also Thailand’s first Airbus A320neo. According to ch-aviation, Thai AirAsia is expecting to welcome two A320neos into its fleet at present. 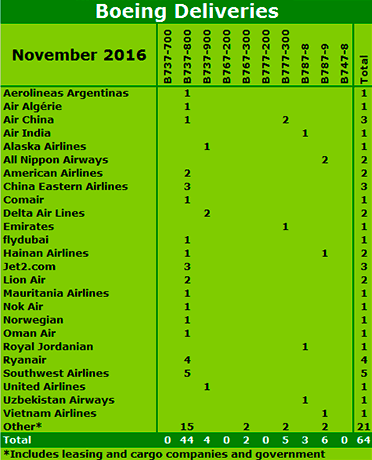 Boeing ended November with a total of 64 unit deliveries, 10 more than what it handed over in October. However it is seven less than the 71 units it managed to distribute in November 2015. A total of 48 single-aisle aircraft were handed over by the US manufacturer, equal to Airbus. A total of 44 737-800s were delivered, with the largest recipient being Southwest Airlines with five units, followed by Ryanair which welcomed four. This takes to 46 the amount of -800s that the Irish ULCC has welcomed into its fleet during the 11-month period of 2016. As well as the -800, four 737-900s were also handed over in November, with Delta Air Lines being the largest customer, with the SkyTeam member collecting two units.

An analysis of the wide-body market shows that Boeing handed over 16 units in November, four less than October. Nonetheless, Boeing managed to deliver three more wide-body units than its European counterpart. The star performer of Boeing’s wide-body variants in November was the 787-9, with six going to various customers around the globe. The largest recipient was All Nippon Airways, with it collecting two -9s. The second best wide-body product was the 777-300, with five being handed over in November. The largest recipient was the world’s largest 777 operator – Emirates – with it collecting two. Three 787-8s were also delivered in November, along with two 767-300s which were handed over to a cargo carrier. 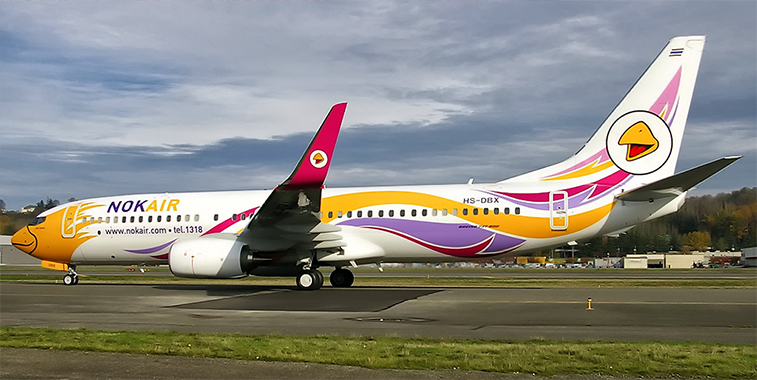 Nok Air welcomed its latest 737-800 in November, registered HS-DBX, with it being seen here after a test flight at Boeing Field in Seattle. According to ch-aviation, the airline currently has 23 of the type in its fleet, with an average age of 7.8 years.