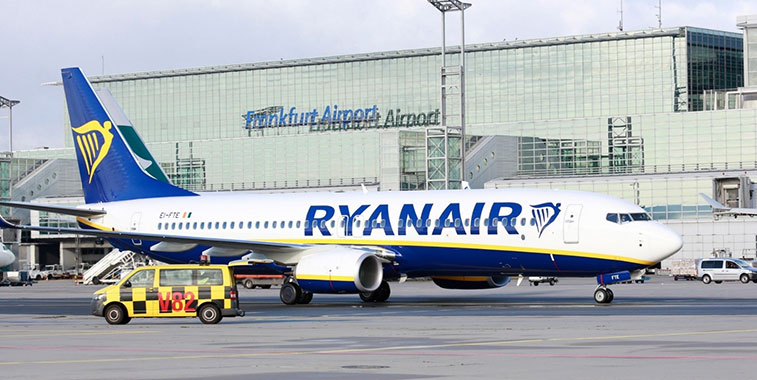 Frankfurt’s current airport charging scheme (and a new, underused runway) have helped persuade Ryanair to base two aircraft there in S17. Initially only four routes are planned (Alicante, Faro, Malaga and Palma de Mallorca) all of which will be served daily. Home carrier Lufthansa also serves all four of these routes in the summer season, two of them (Alicante and Palma de Mallorca) with double-daily flights. The Palma de Mallorca route is also served by airberlin, Condor and TUIfly all offering at least daily flights.

Recent developments suggest that Germany is going to be a market well worth watching in 2017 with significant structural shifts planned for the country’s home-grown airlines, while foreign carriers see opportunities to be taken advantage of. The perceived strength of the German economy has not in recent years translated into dynamic growth at the country’s airports. In 2015 ADV reported passenger growth of just under 4% while in the first 11 months of 2016 demand has grown by just 3%. This compares with traffic growth of 6% in the UK and a whopping 11% in Spain. As a result Spain will overtake Germany for second place in airport traffic for 2016 among European countries, though still some way behind the UK.

The last three months have seen a number of significant announcements which look set to change the German airline industry landscape. In summary:

Analysis of OAG data indicates that scheduled seat capacity from German airports could be up around 7% in the second quarter of 2017 (which is basically the first three months of the S17 season). Based on current schedule data (which is subject to change and which anna.aero believes in the case of airberlin considerably overstates the airline’s expected capacity) the top 15 airlines from German airports are shown in the following graph. German airlines (shown in dark green) account for six of the top 10 airlines, with Ryanair, easyJet, Turkish Airlines and Austrian Airlines (a subsidiary of Lufthansa) being the biggest foreign carriers. 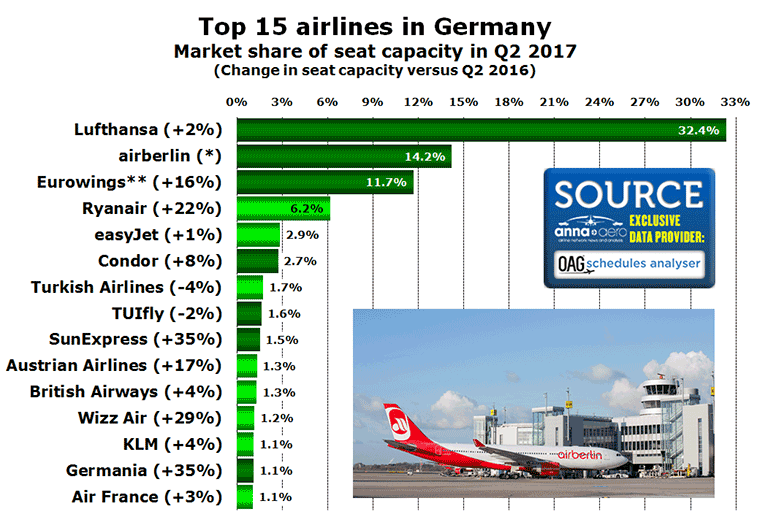 Source: OAG Schedules Analyser for Q2 2017 and Q2 2016. *Analysis of OAG’s current schedule data indicates that airberlin’s seat capacity will grow by 13% in 2017 Q2. However, anna.aero believes this data is unreliable based on what is known about the airline’s plans for 2017. **Includes germanwings (4U) flights.

Schedule data for airberlin currently indicates that it will still be bigger in Germany than Eurowings in the second quarter of 2017. However, with the current fluid state of the airlines and their schedules, by the time the summer season starts this may well have changed. 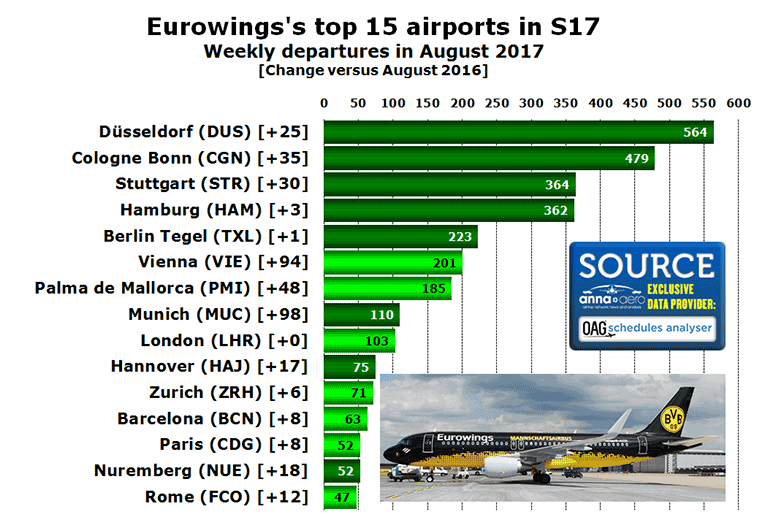 However, with the airline set to wet-lease over 30 aircraft from airberlin starting as soon as next month, it seems likely that there will be significant changes ahead. As and when all the airlines involved sort out their new arrangements anna.aero will re-examine the German market and seek to reveal which airports have gained (and lost) the most from the ‘new reality’. 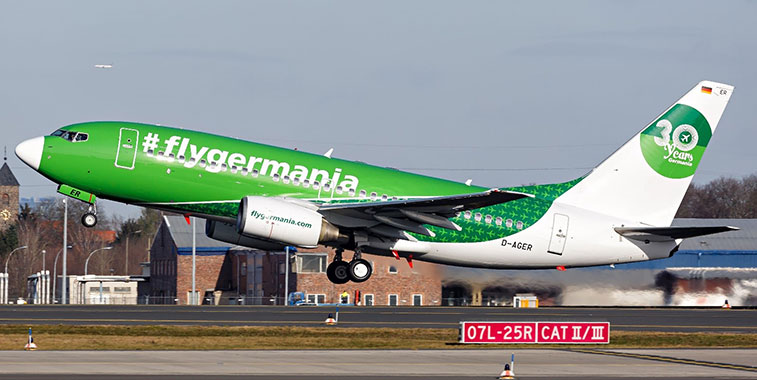 One of Germany’s fastest-growing airlines is Germania which celebrated its 30th anniversary in 2016. The independent carrier will have a fleet of 29 aircraft this summer and will operate from 13 German airports. In a new move for S17 it will also base a single 737-700 in Palma de Mallorca.