Flybe announces London Heathrow as its fifth London airport, but will its various operations from the UK capital in S17 be sustainable? 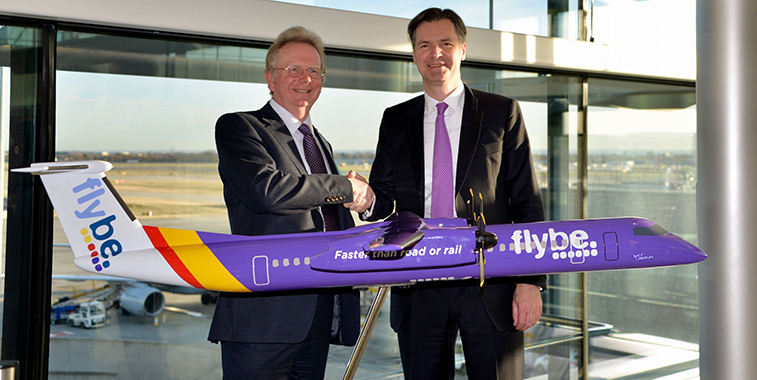 Flybe’s Executive Chairman, Simon Laffin, and London Heathrow CEO, John Holland-Kaye, announced on 20 December the news that from 26 March the airline will operate daily flights from Aberdeen and Edinburgh to the UK’s busiest airport. Heathrow becomes the UK airline’s fifth London airport operation, with the new links to Scotland facing strong direct competition from British Airways, as well as intense indirect services from the likes of easyJet and Ryanair.

Flybe is an airline that has made many significant changes to its network during the past few years, some of which have been successful and others that have not, such as its two Q400-based operation at Bournemouth which lasted just one season (S15). At the end of December, the airline confirmed that from 26 March it will commence flights to London Heathrow from Aberdeen and Edinburgh, taking over the slots that were freed-up by Virgin Atlantic Airways’ Little Red operation which unsuccessfully tried to break the British Airways monopoly on both sectors. What is interesting is that Flybe has not taken up the route that Little Red flew to Manchester, an airport which is a Flybe hub. Nontheless, with this announcment, it means that for S17 Flybe will be operating to five of London’s airports: City, Heathrow, Gatwick, Stansted and Southend.

Intense competition on 22 routes next summer

The table below identifies Flybe’s 22 routes that it will operate from London in 2017 plus the direct and indirect competition each one will face.

Of the 22 routes that Flybe will be operating from London next summer, only four will not be facing any direct or indirect competition, with only one of those, City-Exeter, not being flown on one of the airline’s franchise agreements. It should also be noted that the Lognair-operated Stansted-Dundee service will not be flown under the Flybe brand past 31 August, the date when the franchise agreement between the two carriers ends. Another note is that the City-Cardiff service, which was converted from its previous four-week stint when the Seven Tunnel was shut for repairs to a year-round service, is not yet scheduled or on sale for next summer. Finally, its route between Cornwall Airport Newquay and Gatwick will only face itself as competition, as the carrier also serves Stansted from the UK regional airport.

What is quite evident is the intense competition that Flybe will be facing from London next year. Of the 242 weekly one-way flights that Flybe will operate from the UK capital, there will be 2,123 competing services flown by other airlines. This number does not take into account operations to other airports in cities at the far-end of the sector, such as flights to Belfast International, Milan (Linate and Bergamo) and Venice Treviso, airports where Alitalia, easyJet and Ryanair all offer services to from various London airports. So with so much competition from London, it maybe hard for Flybe to gain a share of the market in order to make it sustainable to operate.

Although operated by Stobart Air, Flybe’s expansion from Southend next summer brings nine new airports to the airline’s network: Budapest, Cologne Bonn, Dubrovnik, Figari, Prague, Reus, Venice Marco Polo, Vienna and Zadar. OAG schedules currently indicate that these services will be flown on Flybe’s 88-seat E175 fleet. The carrier has operated to Cologne Bonn and Dubrovnik before, albeit from Birmingham for both, along with Exeter and Southampton for the latter. To get a better understanding of the decision to serve these routes, anna.aero has looked into each market’s traffic from London between 2010 and 2015 (full-year data for 2016 not yet available). 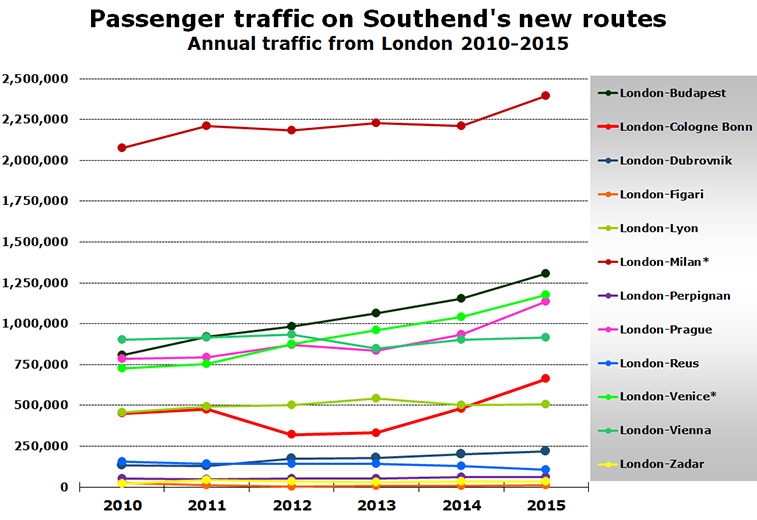 Below are some highlights for each market during the period analysed:

So overall Flybe is entering a mixture of markets that are all seeing various changes in growth, with the average annual growth across all 12 between 2010 and 2015 being 7.5%. However, the smallest markets that it is entering – Zadar, Reus, Figari and Perpignan – have not seen strong market growth compared to the rest of the routes the carrier will enter. Along with these services seeing competition from Ryanair at Stansted (excluding Figari), the nearest rival airport to Southend, it maybe difficult for Flybe to capture part of the market that will allow both operators to be profitable. However looking at ticket prices (9 January) for departures in June to Perpignan as an example, the variation in ticket price between the two airlines is just £2.77 (excluding additional fees), with Ryanair offering a rate of £56.98 and Flybe £59.75 (based on 4 June departure and 8 June return). So by offering similar fares, Flybe is at least able to attract potential customers from its Irish counterpart.

Depsite being at five airports, Flybe is only London’s 18th largest airline

Flybe is not the only airline to be operating from multiple airports in London. British Airways (Heathrow, Gatwick, City and Stansted) and easyJet (Gatwick, Luton, Stansted and Southend) both operate from four, while Ryanair (Gatwick, Stansted and Luton) operates from three. However, these three carriers are the top three operating from the capital, while Flybe, despite its expansion, will only be the 18th largest airline in the UK capital in relation to seats, sitting just behind SWISS, but ahead of Delta Air Lines.

Can Flybe paint the town where Little Red failed?

When Virgin Atlantic’s Little Red flew between Heathrow and Aberdeen, Edinburgh and Manchester, the Aer Lingus-operated services failed to achieve one month in the operating period between March 2013 and May 2014 where load factors were above 50%. Its best performing month in that time was April 2014, where it achieved an average load factor of nearly 48%. All three domestic routes flown by Little Red were served between three and six times daily. What is also not known is how many passengers on Little Red’s services connected onto Virgin Atlantic long-haul sectors. Flybe will be aiming to capture a share of the transfer market to and from Heathrow, with what it calls its “One Stop to the World” connectivity with codeshare and interline partners including Virgin Atlantic and Singapore Airlines. Flybe will operate into Heathrow’s Terminal 2 (Star Alliance excluding Aer Lingus), ideal for Singapore Airlines connections.

Unlike Little Red, Flybe offers services to London City from both Aberdeen and Edinburgh. Another factor to take into account is that since Little Red’s failed attempt to crack the UK domestic market from Heathrow, Ryanair has re-entered the UK capital-Scotland market with multiple daily flights between Stansted, Glasgow and Edinburgh, growing the competition on one of Europe’s strongest domestic markets.

Current schedules show that Flybe will be operating into Heathrow on its 78-seat Q400s, making it the smallest aircraft operating at the airport. This means that for S17 Flybe will be offering just over 15,000 monthly one-way seats to and from Europe’s busiest airport. What this reveals is that it cannot carry the same amount of passengers that Little Red did from Heathrow (60,000+ passengers in May 2014), however it highlights that it can at least capture the same market size and gain high load factors on the fleet it is planning to fly to Heathrow. Again like its Southend operation, only time will tell to see if Flybe will make a success of its new Heathrow venture. Looking at current ticket costs (on 9 January), a return fare in June on Flybe between Heathrow and Edinburgh is £100.48, while BA is showing a ticket price of £83.96, £16.52 less than its new rival. So with BA already offering more daily flights and lower fares in S17, Flybe will have a tough job in this market to turn a profit. 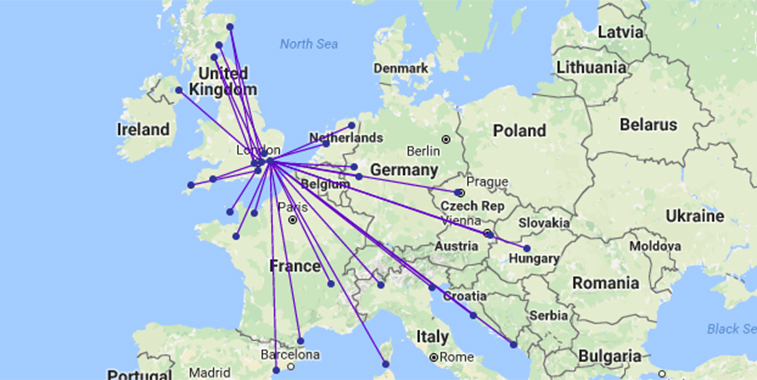 Flybe’s London network for S17. Overall the carrier will be flying 22 routes from the UK capital in S17, with nine of those being new foreign markets for the regional airline.  However looking at the current outlook in certain markets and competition ticket prices, this map could change again for S18.