Joining Fort Lauderdale Airport on 4 January for the inauguration of JetBlue Airways flights to Aruba are Greater Fort Lauderdale Convention and Visitor’s Bureau President, Stacy Ritter, and Broward County Commissioner Dale Holness. The 1,843-kilometre sector, which was also celebrated with a route launch cake, will be flown by the airline daily facing direct competition from Spirit Airlines. 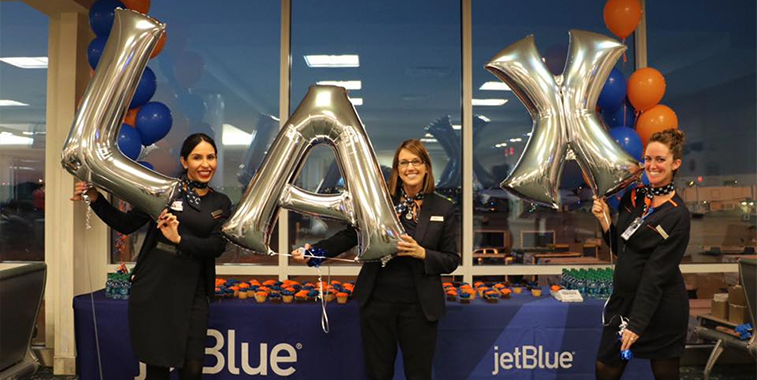 JetBlue Airways celebrated the start of flights to Los Angeles from Orlando on 5 January with balloons and cupcakes. The 3,560-kilometre sector is already served by American Airlines, Delta Air Lines, Frontier Airlines, United Airlines and Virgin America, which all combined offer 54 weekly departures on the Florida-California city pairing. JetBlue will operate a daily rotation on its latest venture from Orlando. Seen on the departure board at San Jose Airport on 4 January is flight number B6 725, otherwise know as JetBlue Airways’ inaugural flight from the North California airport to Long Beach. The first flight can also been seen on pushback at San Jose. JetBlue will fly this airport pairing four times daily.