Airlines started 3,000+ new routes in 2016; Ryanair back on top beating easyJet and Wizz Air as Euro and US (U)LCCs dominate 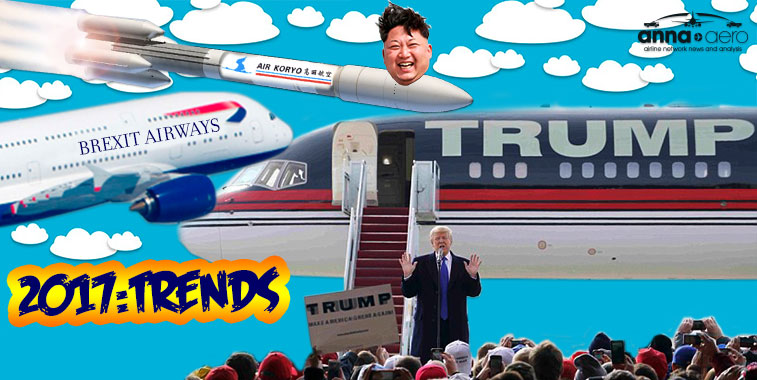 If you desperately need to know what’s going to happen in 2017, get yourself down to your nearest gypsy fortune-teller, because we haven’t got a clue either. But we do know that 1,150 new routes have already been planned and, going by recent experience, a further 2,000 new routes are likely be launched this year. Airbus is the first choice for most airlines for launch equipment (but the lead over Boeing is slender); while there continues to be twice as many route launches from US airports than from any other country.

Ryanair has re-asserted itself as the world’s number one airline for new route launches in 2016. After unexpectedly only tying with easyJet in 2015 (when both carriers launched 99 new routes) the Irish ULCC was a clear winner last year starting service on 200 new airport pairs, easily beating its nearest rivals, fellow European LCCs easyJet and Wizz Air. In total we identified 3,042 new services started by airlines across the world in 2016, down very slightly from the 3,109 we found in 2015. Over half of the new services in 2016 (55%) were on airport pairs not served by any other carrier. The average frequency of the new services launched was 4.1 flights per week. On routes already served by other carriers the average weekly frequency of the new services was 4.9 flights per week (up from 4.8 in 2015), while on those services that were genuinely new routes the average weekly frequency was 3.4 flights per week (the same as in 2015). Airlines used Airbus aircraft to launch around 200 more new services than were started using Boeing aircraft. 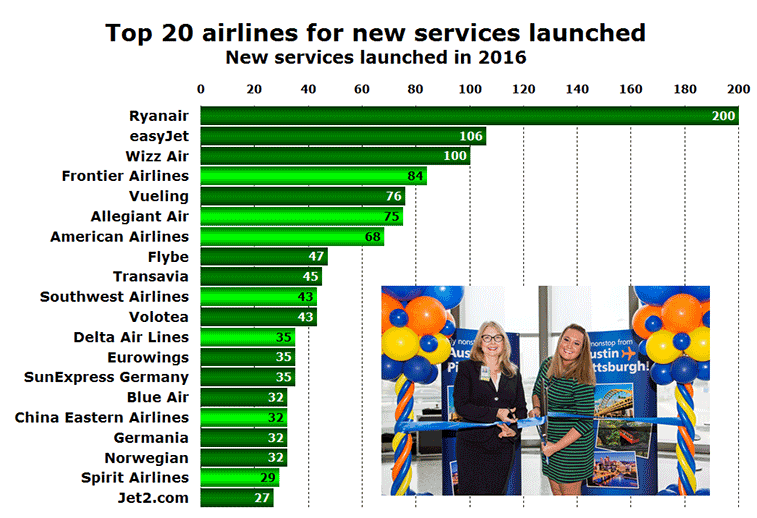 European LCCs dominate the list of the leading airlines for new route launches. Of the top 20 airlines in 2016, 13 are based in Europe, and with the exception of Flybe, could all be considered as LCCs. The airlines have a good geographic spread covering Germany (Eurowings, Germania and SunExpress Germany), Romania (Blue Air), Scandinavia (Norwegian) and the UK (Flybe and Jet2.com). Airlines like Transavia, Volotea and Vueling have pan-European operations with bases in several different countries. 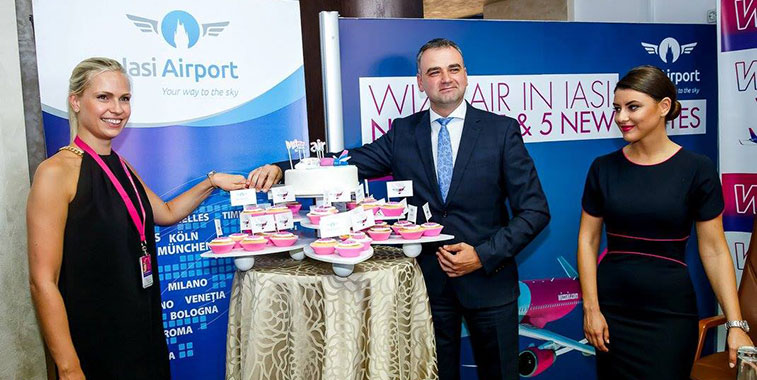 Wizz Air launched exactly 100 new routes according to our analysis in 2016, including several from its new base at Iasi in Romania. That was more than any airline launched in 2015 (when easyJet and Ryanair tied with 99 each), but in 2016 that was only good enough for third place as easyJet (106) and Ryanair (200) accelerated their network growth.

Airports in the US have still had more route launches to celebrate than those in any other country. In fact, there have been more than twice as many new routes started from US airports than from any other country. The runner-up spot in these rankings was hotly contested between Spain, Germany and the UK. In the end Spain repeated its 2015 achievement of being the European country generating the most new airline services. Of the top 15 countries for new services in 2016, 14 were also in the top 15 in 2015, with Poland 13th replacing Thailand (which ranked 15th in 2015). 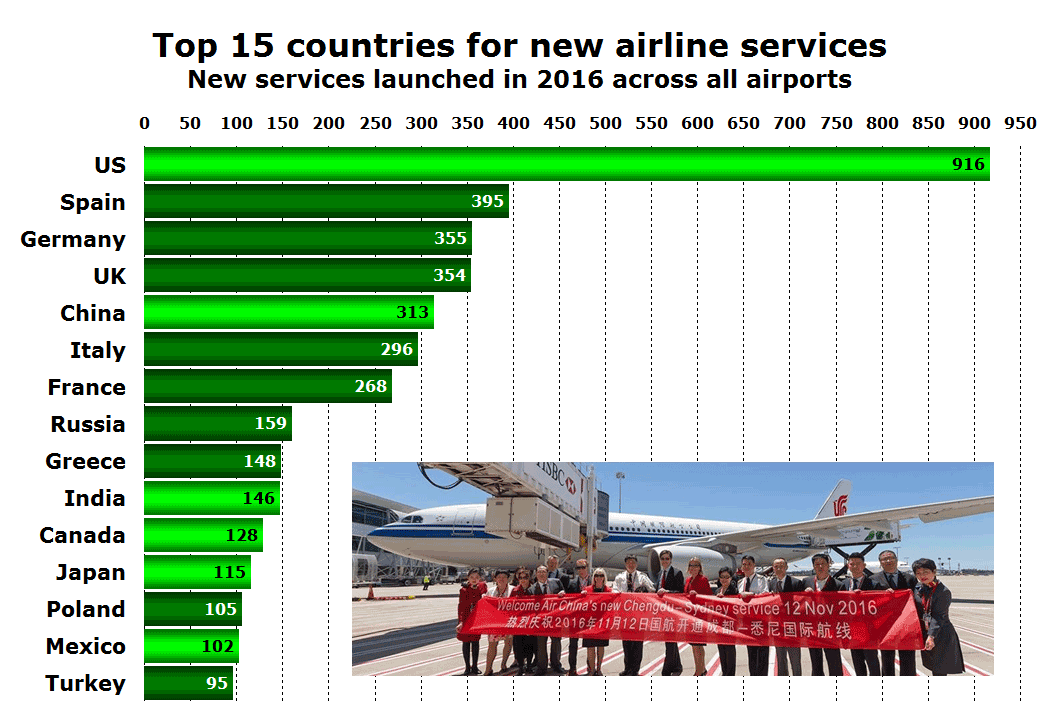 Among routes launched that were already being served by other airlines Nesma Airlines of Saudi Arabia started a route with the highest weekly frequency, six flights per day, as it ventured into the Riyadh-Jeddah market competing against Saudi Arabian Airlines and flynas. In the US, American Airlines began connecting Los Angeles and Seattle-Tacoma, and Washington Reagan with Atlanta, both with five daily flights. JetBlue Airways also began New York LaGuardia to Boston flights with five daily frequencies, while Island Air in Hawaii began connecting Honolulu and Kona, also with five flights per day.

For previously unserved routes, at the end of October Ryanair’s new route from its biggest base London Stansted to Oslo Gardermoen was the most served genuinely-new airport-pair with 21 weekly flights (three flights per day). This was partly a reaction to the imposition of a new travel tax in Norway which meant that Ryanair abandoned its presence at Oslo Rygge and moved some services to Oslo’s biggest airport instead.

As we start 2017, our New Route Database currently has details of 1,150 new services that are scheduled to start before the end of the year. These are being flown by 162 airlines. This time last year the corresponding figures were 1,100 and 170 suggesting that 2017 is indeed going to be another busy year for airline route launches. A total of 12 airlines have already indicated their intention to start over 20 new services this year (the same number as this time last year) with Ryanair, Eurowings, Jet2.com, Wizz Air, easyJet and Volotea leading the way, followed by Germania, Delta, Thomas Cook Airlines, Blue Air, Norwegian and Transavia. 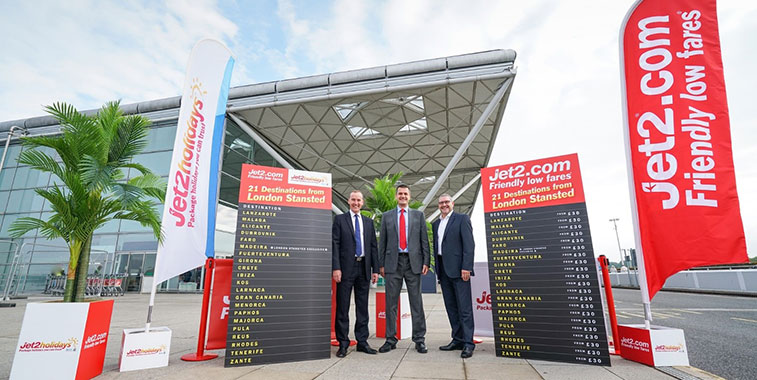 UK LCC Jet2.com is launching 21 new routes from London Stansted this summer, an airport which Ryanair dominates and where easyJet has a significant presence. The carrier is also launching its first flights from Birmingham. As of now only Ryanair and Eurowings have announced more new routes for 2017 than Jet2.com.

Ryanair has so far announced plans to open just two new bases in 2017; in Frankfurt (Germany) and Naples (Italy). Two aircraft will be based at Lufthansa’s biggest hub, while Naples will welcome three 737-800s from May. According to the airline these will be the ULCC’s 85th and 86th bases across Europe and North Africa. easyJet will launch a seasonal base in Palma de Mallorca this year, while the German market is still in a state of flux with airberlin, Etihad Airways, Eurowings, Lufthansa, NIKI and TUIfly still sorting out who is going to operate what-for-whom this summer.

Among European flag-carriers Alitalia, British Airways, Finnair, KLM and SAS have all revealed plans for a minimum of 10 new routes starting in 2017. In the Middle East, Qatar Airways has finalised launch dates for four new routes: to Auckland (which becomes ‘the longest route in the world’), Dublin, Lusaka and Nice). Curiously, local MEB3 rivals, Emirates and Etihad Airways, have so far not confirmed any new routes for this year.

If you are an airline or airport and have pictures of route launch celebrations this year we want to see them, especially if they involve cakes, ribbon cuttings, mascots, fire truck water arch salutes, big welcome banners, celebrities, speeches, flowers, cultural dances, humane animal performances, juggling, gift exchanges etc, etc, etc. Please e-mail your pictures, ideally with names and titles of any key people involved, to marc.watkins@anna.aero, ralph.anker@anna.aero and jonathan.ford@anna.aero. We will then gladly share these pictures with our global readership. 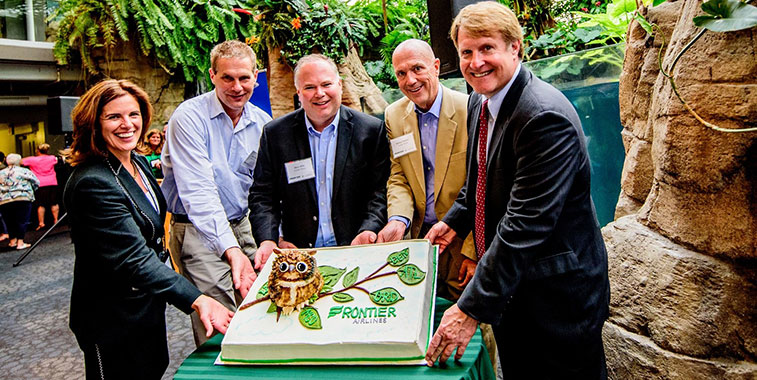 Frontier Airlines was the leading non-European carrier for route launches in 2016 entering 84 new airport pairs. This included launching service from Pittsburgh to five destinations in June. This impressive cake was prepared to celebrate the event featuring Otto the Owl, one of the airline’s famous animal tailfins.