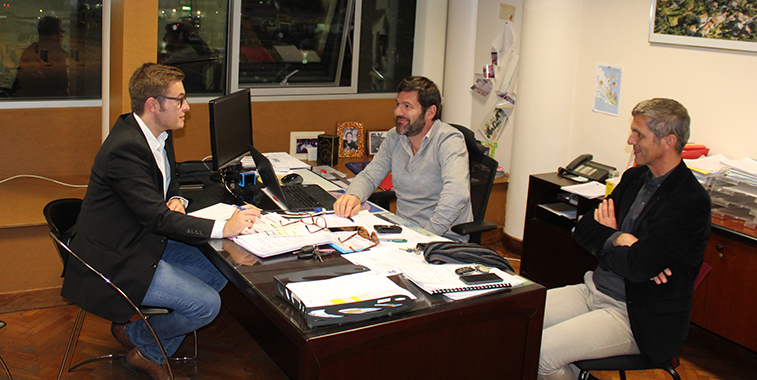 Ajaccio Airport is the host of this year’s CONNECT conference, taking place between 22-24 February, and anna.aero’s Assistant Editor, Jonathan Ford, was invited to meet Alain Pasqualini, GM of the Chamber of Commerce of Ajaccio and South Corsica, and Laurent Poggi, Director of the Airport, last month. One of the main features of Ajaccio Airport in the past few years is that international traffic has quadrupled, with overall traffic up 39% since 2005.

Ajaccio Airport serves the city of the same name, which is the largest in Corsica, and also the home town of Napoleon. Since 1962, the population of Ajaccio has nearly doubled (+94%), with latest census data showing that 66,000 inhabitants now live within the city. In 2015 the city’s airport, otherwise known as Napoleon Bonaparte Airport, welcomed 1.36 million passengers, with 9.7% of traffic flying on international services, up from the 2.7% share the market had in 2005. To find out more about Ajaccio Airport’s recent developments, anna.aero’s Assistant Editor Jonathan Ford flew out to the Corsican city and met with the airport’s GM, Alain Pasqualini, and Operations & Security Director Laurent Poggi.

Back in 2005, Ajaccio welcomed a little under 979,000 passengers through its terminal. When comparing that to 2015, traffic has increased by just over 39%, with the Corsican capital seeing 1.36 million passengers that year. During the period analysed, traffic has grown on average by 3.4% per annum. 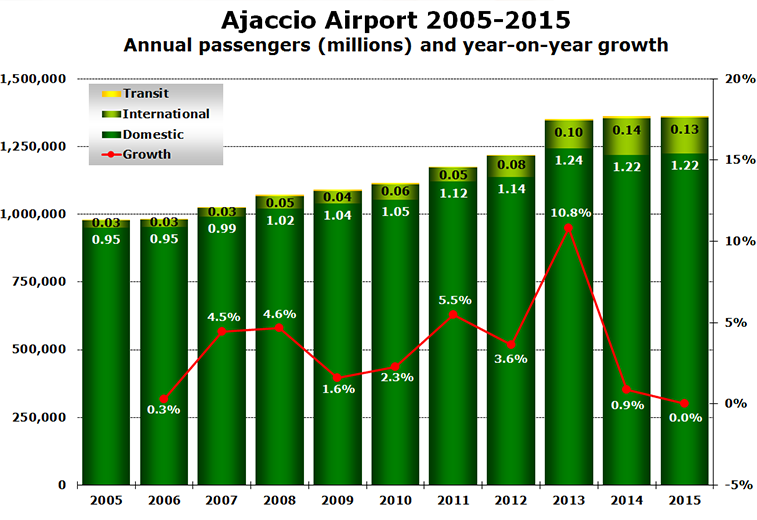 For the 11 months of 2016 where data is available (January-November), Ajaccio is reporting a rise in traffic for the period of 4.3%, which represents 56,200 additional passengers. To put this into perspective, Ajaccio handled 51,500 passengers in January last year, 49,200 in February, and 57,000 passengers in November, illustrating that the growth is around the same as an additional month’s worth of passengers.

The strongest month for growth in 2016 (December not known) was July, with traffic for the seventh month of the year indicating an increase of 13%. The only other month showing a double-digit rise in traffic is November, where a little over 10% more passengers flew from Ajaccio when compared to the same month of 2015. With the average monthly growth rate in traffic for the 11-month time frame being 4.3%, anna.aero predicts that Ajaccio will break the 1.4 million passenger barrier in 2016 by a few thousand passengers. Pasqualini commented to anna.aero during the meeting that he hopes to see the airport reach two million passengers per year by 2020.

In 2005, Ajaccio welcomed 26,200 international passengers. When comparing that figure to that achieved in 2015, traffic has risen in the international market by 403%, with 131,800 passengers flying on non-French routes in that year. On average, international traffic has been growing from Ajaccio by 19.4% year-on-year during the past decade.

Looking at Ajaccio’s 2015 monthly passenger statistics and putting them into anna.aero’s Seasonal Variation in Demand (SVID) calculator, the airport does not perform that well, generating a score of 33.95 – a “Managerial and operational challenges” scenario. This is evident with 80% of traffic in 2015 flying through the airport between April and October. “Around 80% of passengers are inbound to Ajaccio,” states Pasqualini. “Many of these fly in during the summer months, and what we are aiming to achieve is a more even portfolio of flights, and to spread our traffic throughout the year as well as in the summer months.” Ajaccio Airport in 2015 welcomed 1.36 million passengers, with traffic for 2016 expecting to pass the 1.4 million barrier. The airport’s number one airline is Air Corsica, which during the winter season on average commands 66% of monthly seat capacity from the airport, while in the summer months it’s 44%.

In 2005, Ajaccio was not served by any LCCs, with the first such service launching on 4 May 2008, when easyJet commenced a summer seasonal weekly (Sundays) flight from London Gatwick, and with a six times weekly seasonal link from Geneva launching later in the S08 programme. The now-LCC Transavia did link Amsterdam to Ajaccio pre-2008 (with the flight continuing on to Olbia in Sardinia). However, at the time the airline was operating this sector as a charter service rather than a low-cost scheduled route. During its first summer of operation, easyJet recorded an average load factor of 75%. This is based on traffic data compared with OAG schedules, with 21,700 passengers using the carrier to get to Ajaccio in its first season. For S17, easyJet will be serving five routes from Ajaccio, with Basel, Lyon and Paris CDG being served along with Gatwick and Geneva on a total of 29 weekly flights. In 2008, the LCC market accounted for just 2% of passengers. However, the market’s share of traffic from Ajaccio in 2015 was 26%, with the airport’s four serving LCCs that year being easyJet, Transavia, Volotea and Norwegian.

Paris Orly is the number one route from Ajaccio, with the connection to the French capital’s second largest airport accommodating a little over 21% of available seat capacity in S17. This compares to the 26% in terms of weekly seat capacity it had last summer. The route has seen its share of seats cut by nearly 14% during the past year while capacity to Paris CDG has risen by nearly 35%. Taking both operations to Paris into consideration, seat capacity overall is down 5.4% to the French capital this upcoming summer. Nonetheless, schedules could still be updated before the start of the S17 season. 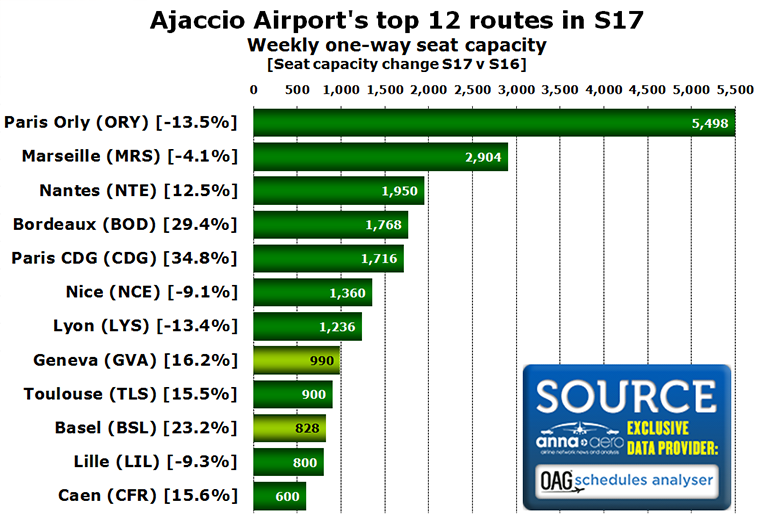 Of Ajaccio’s top 12 routes two (highlighted in light green) are to Switzerland. Overall capacity to Switzerland is up by 19% this upcoming summer when compared to S16, making it Ajaccio’s largest international market.

Air Corsica, an airline which anna.aero recently met in Ajaccio, is the largest airline operating from the city throughout the year, with the only other airline at Ajaccio to offer year-round services being Air France. On 26 March the carrier will inaugurate its only scheduled international route from Ajaccio – Brussels Charleroi. To be operated twice-weekly (Thursdays and Sundays) on A320s, the route will be the 15th largest service in terms of weekly seats at Ajaccio, with it placing above Brussels Airlines’ route to Brussels‘ main airport (17th largest route), an airport pair which is itself seeing a rise in weekly seat capacity of nearly 14% in S17. Along with Charleroi, another airport joining the Corsican airport’s route map next year is Paris Beauvais, a route that will be launched by Volotea on 8 April.

“One of our main aims is to try and increase international traffic throughout the year,” highlights Pasqualini. The main areas of development for the airport are Northern Europe, particularly the UK, Germany and Scandinavia. One of the key markets highlighted to anna.aero by the airport was London. “We very much want to develop the British market, not only for tourism, but to also develop ties with the UK.”

During the winter months, Ajaccio sees between two to three carriers operating. They are home carrier Air Corsica, which commands on average in the winter season 66% of monthly capacity (October-March). The other serving airlines are Air France and Volotea, with the latter not operating during February. “Although Volotea mainly operates during the summer, it does offer a series of flights in December and January for the holiday season,” confirms Pasqualini. 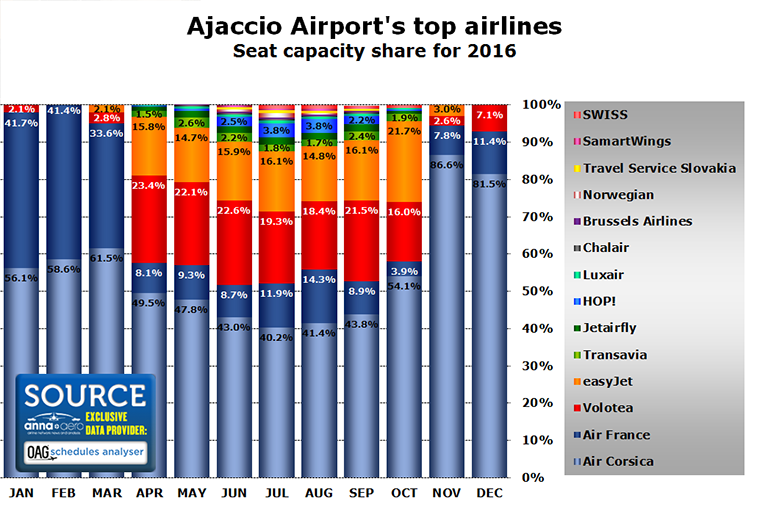 During the summer season Ajaccio welcomes up to 14 airlines, with this affecting Air Corsica’s market share. Although it is achieving a 66% majority on average in winter, during the summer the home-based carrier only achieves an average of 44%. The most seasonal airline at Ajaccio is Norwegian, which only operates its route from Oslo Gardermoen during June, July and August. SWISS, SmartWings and Travel Service Slovakia all operate for four months during the year, with Brussels Airlines and Chalair serving the airport for five months. Transavia, Jetairfly, HOP! and Luxair all serve Ajaccio for seven months of the year, while easyJet operates for nine months based on OAG schedules for 2016.

Not only is Ajaccio seeing international traffic booming, but in February it will grab the international attention of route development planners as airports and airlines from across Europe and North Africa descend on the city for CONNECT. Taking place between 22-24 February at the Palais des Congrès, situated right in the heart of the city next to the harbour, the venue is only a 10-minute drive from Ajaccio Airport. Commenting on the excitement of hosting CONNECT 2017, both Pasqualini and Poggi highlighted the international significance it will bring to Ajaccio, and how it will be able to highlight its credentials to the multiple airline planners that will be arriving in the city next month. One of the best ways to see Ajaccio, the host venue for this year’s CONNECT conference, is by air. anna.aero’s Assistant Editor Jonathan Ford was fortunate enough to be invited by the airport to take a flight across the city, which is a trip he recommends for all delegates to take if possible during their stay in the city.