Budapest Airport-anna.aero Runway Run 5.0: The Race to Find the Fastest Airline in the World is on 2 September! September 2016: 976 runners took part in last year’s Budapest Airport-anna.aero Runway Run, sponsored by Airbus and Qatar Airways, competing for a series of anna.aero-Budapest Airport “Golden Cake Trophies” including the key team prize of “The Fastest Airline in the World.”

January is the time for diets and new fitness goals so, if you work in aviation, here’s yours: Budapest Airport, Runway 13R-31L, Saturday 2 September 2017. This is the venue and date that Budapest Airport and anna.aero have confirmed for the air transport industry’s annual premier charity-sportive event – “The Race to Find the Fastest Airline in the World.” Budapest is the only proper major airport in Europe (11 million+ pax) prepared to close an active runway and stage a 10km race on it in broad daylight. This is the fifth annual race and runners of all abilities from airlines, airports and enterprises across the aviation community are once again invited to take part.

Aer Lingus once again officially “The Fastest Airline in the World”

A determined team of 20 Aer Lingus runners raced down Budapest Airport’s Runway 13R-31L last September to resoundingly reclaim the title of ‘The Fastest Airline in the World’ in the air transport industry charity race, beating a dozen other airline teams and snatching the title back from reigning champions SWISS.

All entry fees – just €30 before July 2017 – are donated to cancer charities, and other child-focused good causes. Comprising of two race distances – 10km (four runway lengths) and 5km (a distance manageable even by first-time runners) – the run is open to all individuals and teams in the aviation community, followed by a superb barbecue on the terrace of Budapest Airport’s historic former Terminal 1 overlooking the re-opened runway. 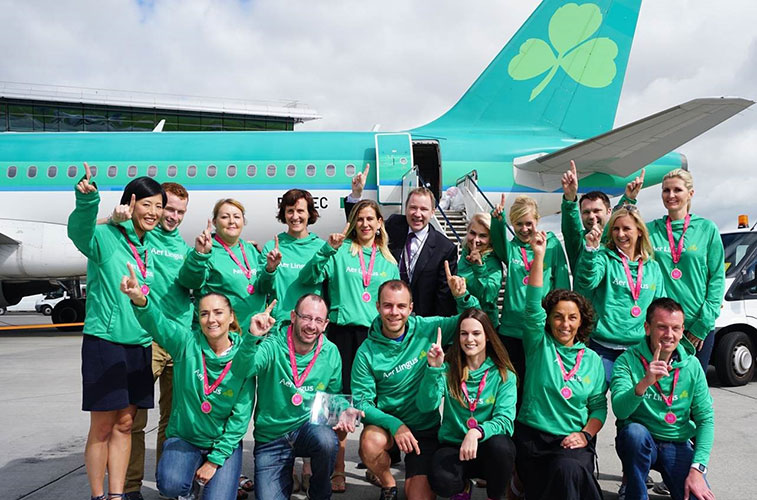 Victorious homecoming: Aer Lingus CEO, Stephen Kavanagh, welcomes home “The Fastest Airline in the World” to the Dublin Tarmac. As well as winning the most-coveted team prize, the Irish flag carrier also took the “double” as team member Robert Murphy (centre, front row) crossed the line in first place taking the prize of ‘Fastest Aviator’ in a blazing time of 34:47.

Budapest Airport-anna.aero trophies 2016 were awarded to: 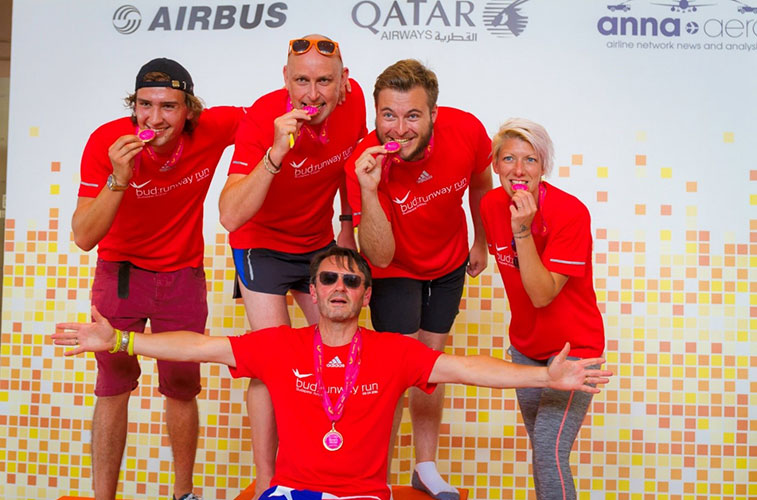 All entry fees – just €30 before July 2017 – are donated to cancer charities, and other child-focused good causes. anna.aero’s own team, captained by publisher Paul Hogan, proudly bite their 2016 medals. Every finisher receives “The Bron’s Medal”, named after Hogan’s late-12 year-old daughter, Brontë “Bron” Hogan, who passed away in 2011 after a five-year battle with leukaemia.

What they said about Budapest Airport-anna.aero Runway Run 2016 (sponsored by Airbus and Qatar Airways)

Jost Lammers – CEO, Budapest Airport: “Close to 1,000 runners from across the international aviation community took part, helping to promote our airport and this fantastic city while allowing us to donate 100% of entrance fees to the benefiting charities. This event is firmly and truly established as a winning formula for all.”

Stephen Kavanagh – CEO, Team Aer Lingus, Fastest Airline Team 2014 & 2016: “Congratulations to all involved from across our airline in delivering a great team performance in such style, you’ve done Aer Lingus proud and helped a great charitable cause along the way.”

Sinead Cormican – Team Captain, Airbus, Main Title Sponsor and Fastest Aviation Enterprise 2016: “What a super event with great organisation! We are so happy to be a part of it and to be able to support the charities. We have to be back next year!”