Katowice-Venice is “Skyscanner Unserved Route of the Week” with 23,000 annual searches; Nadi-Adelaide becomes our third success 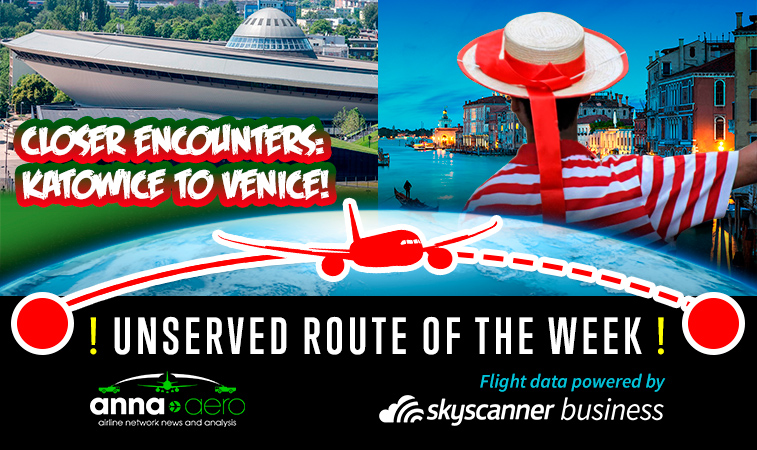 Spodek, which means “saucer” in Polish, was for many year’s Poland’s largest events arena after it opened in 1971, and its shape and image is still frequently adopted as a symbol of Katowice. The city boasts a population of 300,000, extending to 5.3 million in the wider Silesian metropolitan area, an extensive cross-border trade and manufacturing region. Wizz Air overwhelmingly dominates Katowice Airport, but we think that easyJet should also be interested in the route to its important Venetian base.

With nearly 30,000 searches in the last year, a potential new route from Katowice to Venice has been identified as this week’s “Skyscanner for Business-anna.aero Unserved Route of Week” – a powerful analysis based on aspirational data captured from the Skyscanner.net flight comparison site used by +60 million unique visitors per month.

Before we start the in-depth analysis of this particular unserved city pair, we want to bring you news of our third success – the conversion of a ‘Unserved Route of the Week’ to ‘served route’ (following our successes with Brussels to Glasgow and Dublin to Miami). Fiji Airways announced just before Christmas that it intends to start twice-weekly services from Nadi to Adelaide from June this year. This previously unserved route was the focus for this feature in late November. An ecstatic Jonathan Cheong, Head of Aviation Business Development at the Australian airport, which will host World Routes in 2019, commented: “I want to personally thank anna.aero for this piece of work. Many thanks and much appreciated! Fiji Airways’ announcement is huge and exciting news for us.” 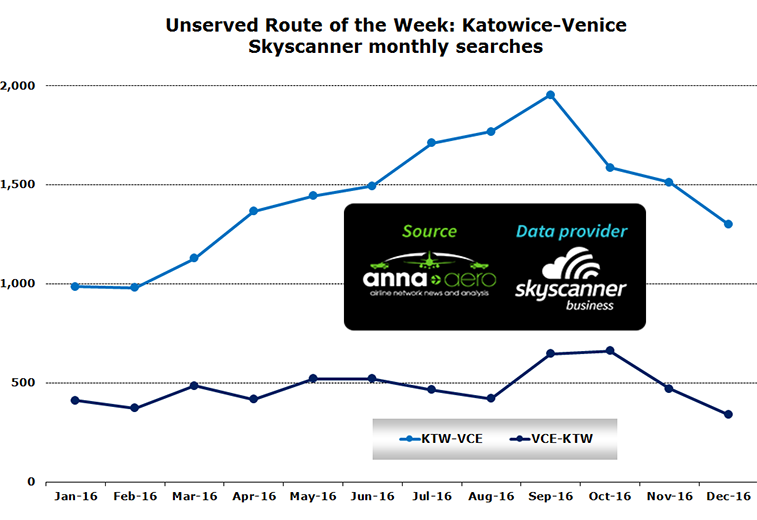 Back in Europe, Skyscanner demand on this week’s unserved route shows a significant bias in favour of the Polish end, a 75/25 split, so the potential carriers at Katowice were therefore considered first. The Polish airport is dominated by Wizz Air, controlling 74% of weekly seats, (its seventh biggest airport in terms of weekly seats), according to OAG data for the week commencing 10 January. At the moment, the ULCC operates to 28 destinations from Katowice, including five in Italy – namely to Bari, Milan Bergamo, Bologna, Rome Ciampino and Naples (all operated twice-weekly). Wizz Air is also no stranger to Venice, serving the city’s Treviso Airport with flights to seven destinations, but presently none in Poland. With this evidence in mind, it is clear that the ULCC should be joining up the network dots on this currently unserved opportunity soon.

The second-largest carrier at Katowice is Ryanair, with a 9% share of weekly capacity. However, its current network of three destinations from Polish city is centred on routes to the UK and Ireland – daily services to London Stansted, and twice-weekly flights Birmingham and Dublin. On this basis a link to Venice is perhaps off the radar for Europe’s biggest airline at the moment. “There is a lack of direct route between the north of Italy and south of Poland – Silesian Region,” says Monika Krzykawska, Marketing Manager at Katowice Airport. “Italy is an important market for Poles, and Venice is a wonderful destination as a city break for Polish tourists living in the vicinity of Katowice Airport.”

Contemplating the Venetian end of the route, the potential carriers at Italy’s fifth busiest airport – Marco Polo – were considered next, and it is evident that the facility is currently dominated by easyJet, a base which opened in February 2016. The pan-European LCC heads the serving airlines (with 23% of weekly seats), well ahead its nearest rival Alitalia with just 9%. Of easyJet’s 20 routes presently operated from Marco Polo, only one is to Poland – a three times-weekly sector to Krakow that was launched in November 2016. As the LCC already has experience in this market, it would therefore not be out of the question for it to take on this potential route.

Heading across town to Treviso, Ryanair is the dominant player here, controlling 86% of weekly seats, with Wizz Air trailing way behind with a modest 12%. The #1 carrier at the airport offers a network of 22 destinations from its 24th largest operation, but the ULCC does not fly to any Polish cities. Again the evidence seems to be pointing away from the Irish airline considering this city pair in the short-term. “Travellers coming to Katowice can directly visit Silesia region – not only Katowice – city of music, but also go to Beskidy Mountains, Trail of the Eagles’ Nests, Częstochowa Monastery or Auschwitz,” adds Krzykawska.

When looking at the previous year of search data, the busiest month for potential traffic flows (for both directions on the route combined) is September 2016, with around 2,600 searches, over 1,200 higher than the lowest monthly figure, which was recorded in February 2016 (1,400 searches). The seasonality profile of this search data is less extreme than the last Unserved Route of the Week (Bergen to Hamburg) with the low-month traffic representing 52% of the highest month. According to OAG Traffic Analyser, because there is no direct service, the top three connecting options chosen by those passengers who did book travel between Katowice and Venice in the past year indicates that the majority of connecting travellers use Frankfurt (93%), and Warsaw Chopin (6%). Aside from a small amount of people who used Munich as their transfer hub, these were the only three airports which provided connecting options to potential passengers between the two cities in the last year.

Indeed, an O&D that is not served by a non-stop flight will typically display a low purchase rate and low traffic. In this instance Skyscanner’s Travel Insight indicates a monthly average of 1.9% for the Katowice to Venice route (see graph below). Therefore, if there was a Katowice to Venice route, and if bookings performed in line with the “Skyscanner market average” for direct services at both airports (4.3%), the airline operating this route could immediately expect an improved purchase rate of 126%, without any increased marketing spend. However, with 23,000 annual searches a twice-weekly service should be immediately viable for the airline selecting to start this potential city pair. “In Katowice’s catchment area 13 million potential passengers live, so in addition to Skyscanner’s numbers there is a wider market to serve this route,” concludes Krzykawska. 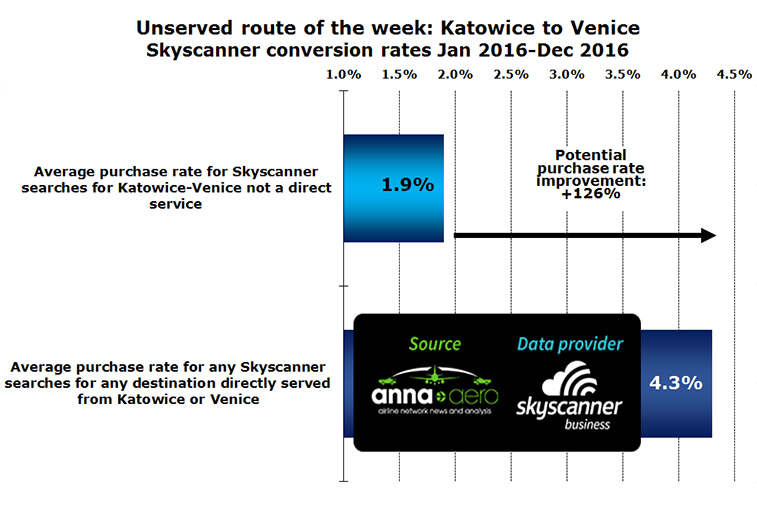