Eurowings opens its latest base in Salzburg, its second in Austria after Vienna; one stationed A320 and 10 routes served this summer 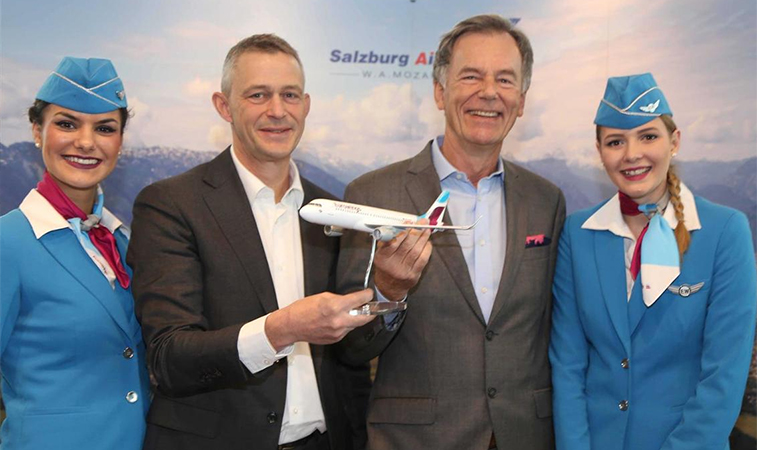 Celebrating the opening of Eurowings’ newest base in Salzburg are Eurowings MD Michael Knitter and Salzburg Airport MD Roland Hermann. The airline will station one A320 in the Austrian city, the Lufthansa in-house LCC’s second base in Austria after Vienna. The carrier will serve 10 routes from Salzburg this summer.

On 12 January Eurowings opened its latest base in Salzburg. Initially the airline will base one A320 at the Austrian airport, with the Lufthansa in-house LCC offering 24 weekly flights to Salzburg from five destinations: Düsseldorf (five weekly flights), Cologne Bonn (daily), Brussels (four weekly), Paris CDG (five weekly) and Hamburg (three weekly). Below is a breakdown of the based A320’s schedule.

On top of the based aircraft’s schedule, a Monday Düsseldorf, Saturday Hamburg and Sunday Cologne Bonn rotation will be flown on away-based units, with OAG schedules currently highlighting these services as being operated by germanwings. The quietest day of the week for the stationed aircraft is Tuesday, with it only flying two rotations, while Friday is the busiest with it serving four routes.

Looking at the summer schedule, nine of the 30 weekly flights will be flown with an away-based aircraft, confirming that the airport will remain as a one aircraft base for S17. All flights to Cologne Bonn this summer will be flown on an away-based aircraft, with OAG schedules currently indicating that these will be flown under a germanwings flight code also. The Tuesday Palma de Mallorca flight will be flown by an aircraft that the airline will base at the Spanish airport this summer. The Thursday and Saturday Düsseldorf rotations and Sunday Paris CDG flight will also be flown by away-based aircraft, with the latter service showing to be operated by a Berlin Tegel-stationed A320. It should also be noted that for S17 Düsseldorf sees its weekly frequency drop from five to three flights, with the loss of the Friday and Sunday rotation. Brussels also drops to three times weekly, with the loss of the Monday service to the Belgian capital.

The table below highlights the S17 weekly operation of the 10 routes that Eurowings will operate from Salzburg.

Of the 10 routes that the airline will operate from Salzburg, only four of them will face direct competition. The most competitive route is Düsseldorf, with Eurowings’ four weekly flights going head-to-head against airberlin’s 19 weekly services. OAG schedules show that the latter carrier operates this 594-kilometre link on its Q400s. 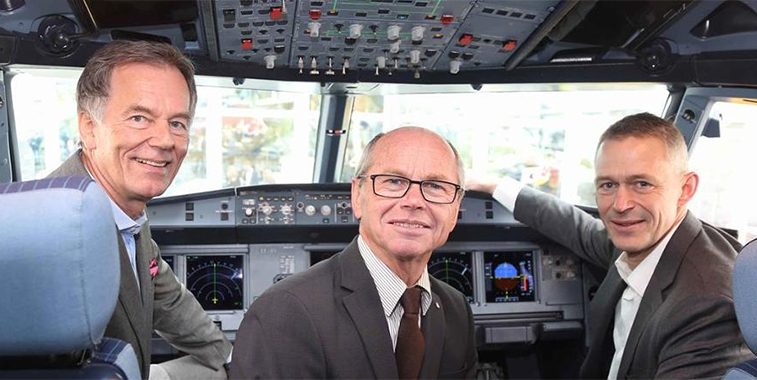 Shortly after landing on 12 January, Salzburg Airport MD Roland Hermann, Salzburg Airport VP Christian Stöckl and Eurowings MD Michael Knitter, tried out the cockpit of Eurowings’ Salzburg-stationed A320. The aircraft will initially have an average flight time of 01:27 hours. However, with the introduction of five routes in S17, this will increase by seven minutes to an average flight time of 01:34 hours.