Southwest Airlines is Las Vegas’ #1 carrier with 41% of seats in S17; 2.3 million more passenger flown annually when compared to a decade ago 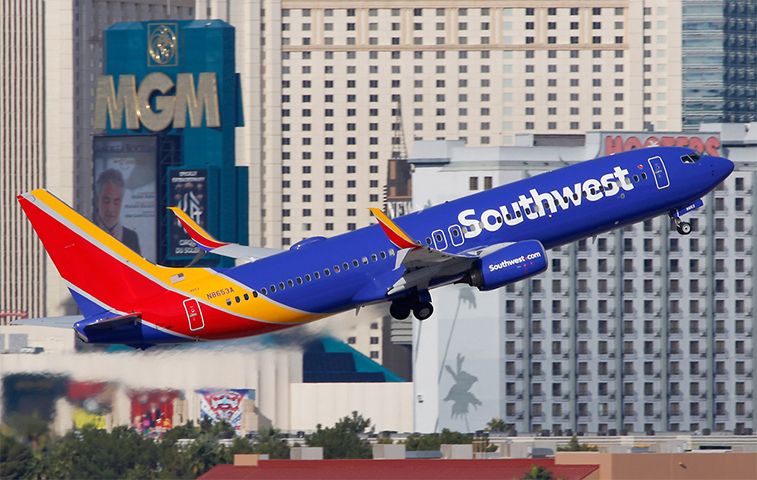 Seen taking off in front of the MGM Las Vegas Hotel is a Southwest Airlines 737-800. The airline is the largest carrier at Las Vegas, with it operating 41% of monthly one-way flights from the Nevada airport this summer. Las Vegas is the airline’s third largest airport operation. Although the LCC will be operating 56 routes this summer, none of them are to international destinations.

Las Vegas is the 28th most-populated city in the US, with it having an estimated population, including urban areas, of 1.3 million people according to the US Census Bureau. The city’s population will grow by a few thousand next month, as airline and airport network planners descend on Sin City for Routes Americas 2017, taking place between 14-17 February at the Aria Resort and Casino.

Las Vegas’ largest carrier is Southwest Airlines, with the LCC occupying 41% of monthly seat capacity in S17. The Nevada hot-spot is the airline’s third largest airport operation this summer, the same position it held in S16. The base will occupy 5.4% of the LCC’s departing seat capacity, down 0.4% from the 5.8% share it had last year.

Traffic growing at its fastest rate this decade

2015 was the best year this decade for Southwest at Las Vegas in relation to traffic growth. The LCC carried a little under 17.6 million passengers from the Nevadan city that year, a growth of 5.6% (936,000 passengers) when compared to 2014, and 2.3 million more passengers than the figure the airline flew from the city 10 years ago. The average year-on-year growth in passengers for Southwest from Las Vegas during the past decade is 1.7%, with two years (2008 and 2009) seeing a decline in traffic, no doubt due to the 2008 financial crisis. Between 2006 and 2015, Southwest has carried 158.6 million passengers from Las Vegas. 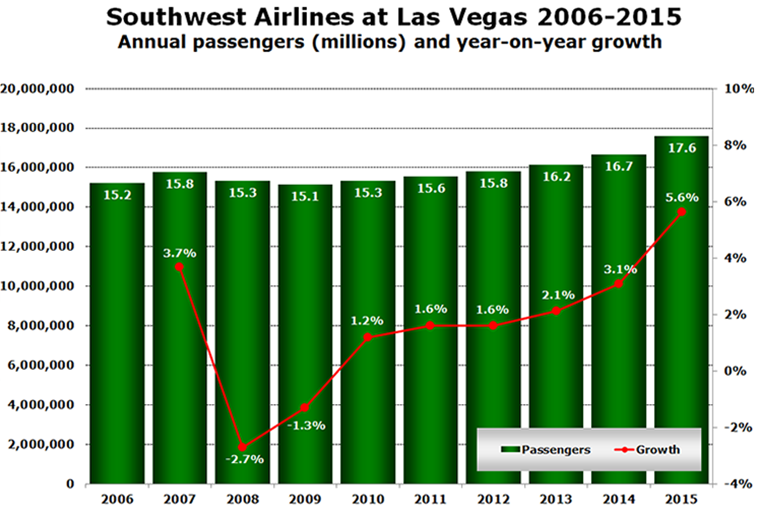 For the data that is available for 2016 (January – October), traffic for the year so far is growing at an average monthly rate of 1.7%. The best month for growth in the 10-month period is February, when traffic grew by 6.5%. The worst performing month is July, as traffic fell by 3.0%. All of the months analysed welcomed at least one million passengers, with the biggest variance being between October (1.58 million passengers carried) and February (1.28 million). If the average monthly growth rate for 2016 is maintained for the remaining two months of the year, anna.aero predicts that Southwest Airlines will have carried just under 17.9 million passengers from Las Vegas last year. In regards to the distribution of arriving and departing passengers to Las Vegas on Southwest, statistics supplied by the Bureau of Transportation Statistics shows that for 2016 the distribution is 50/50. The same ratio was also recorded for the year before.

Southwest will be serving 56 routes from Las Vegas this summer, with all of them being domestic. Its most popular route is San Diego, with this occupying 5.0% of the airline’s weekly departing seat capacity this summer. Looking at OAG schedules for week commencing 20 June, the airline will be operating 74 weekly flights on the city pair. Southwest is the largest carrier on the 414-kilometre link to San Diego, with it occupying just over 71% of weekly seats. The route is also served by Spirit Airlines (18% of weekly seat capacity) and Delta Air Lines (11%). 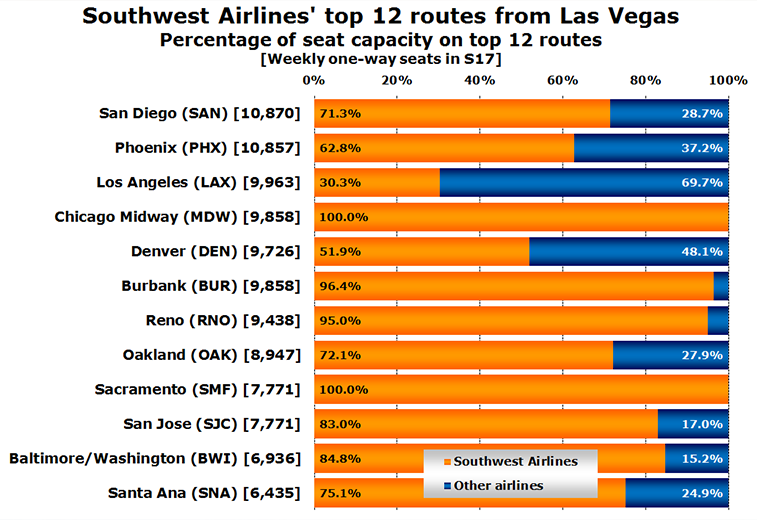 The largest monopoly route for Southwest from Las Vegas is Chicago Midway (fourth largest overall), an airport pairing which will see the airline operate 62 weekly flights this upcoming summer. Although the airport pairing is unique, the airline faces strong competition to Chicago, with United Airlines (35 weekly flights), American Airlines (28) and Spirit Airlines (21) all operating between Las Vegas and Chicago O’Hare. Of Southwest’s top 12 routes from Las Vegas, the only other sector which does not face direct competition is Sacramento. Looking ahead to 2017, the only new route planned for Las Vegas is Minneapolis-St.Paul, with the airline planning to inaugurate this service on 9 March.

Although Las Vegas is Southwest’s third largest airport, none of its 56 routes from the city this summer are international. Looking at the airline’s top two airports – Chicago Midway and Baltimore/Washington – the latter will be linked to 10 international destinations in S17, while Midway is connected to four airports in Mexico and the Caribbean. Looking at the LCC’s smaller bases, the fourth largest airport for Southwest – Denver – will be linked to three cities in Mexico as well as Belize City, while fifth-placed airport Phoenix, like Las Vegas, has no international connections. The reasoning for Southwest not serving international routes from Las Vegas could well be down to fact that the market is primarily an inbound one, however given that the city has a urban population of 1.3 million, there could well be demand for international services for Southwest. Las Vegas itself will be connected to 18 international destinations this summer, with it only having three connections to Mexico – Guadalajara, Mexico City and Monterrey.

Southwest in S17 will be operating 1,000 weekly flights to Las Vegas, averaging at 143 daily flights. The most popular days for the airline are Tuesday and Friday (216 daily flights each), with these two days accounting for 49% of the airline’s weekly flights from Las Vegas. Looking at Tuesday 20 June 2017, Southwest sees 27% of its daily departures from Las Vegas take place before 10:00. The most popular hour for departures however is between 12:00 and 12:59, when there are 20 scheduled (9.3% of daily departures). This means a Southwest aircraft departs on average every three minutes during that hour. The most popular time for arrivals is between 11:00 and 11:59. Referring to the morning rotation pattern for the airline in OAG schedules on 20 June, it has between 15-20 based 737s in Las Vegas, however this of course can vary throughout the year. 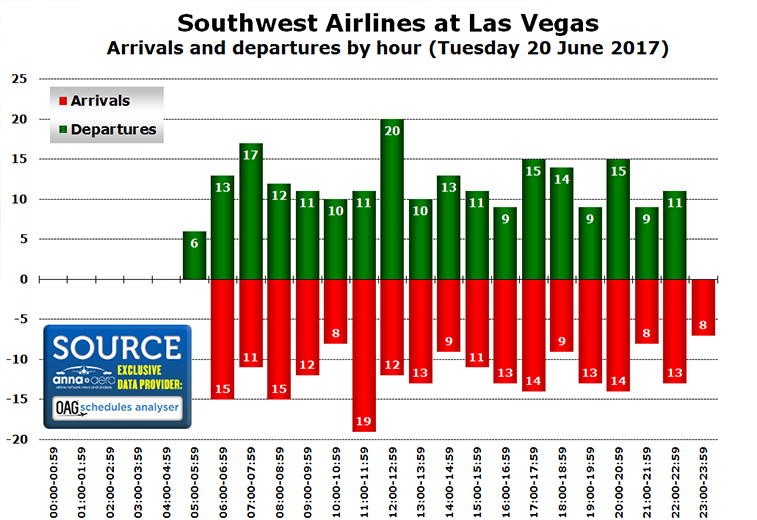 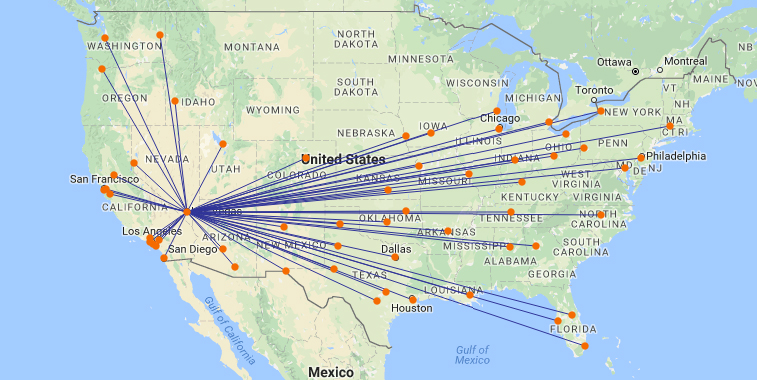 Southwest Airlines’ Las Vegas S17 route map. The carrier will be operating 56 routes from Las Vegas this summer, all of them domestic connections. This means that Las Vegas’ biggest carrier currently does not have any international sectors from the airport, something it may well rectify during Routes Americas, which will land in Sin City next month.