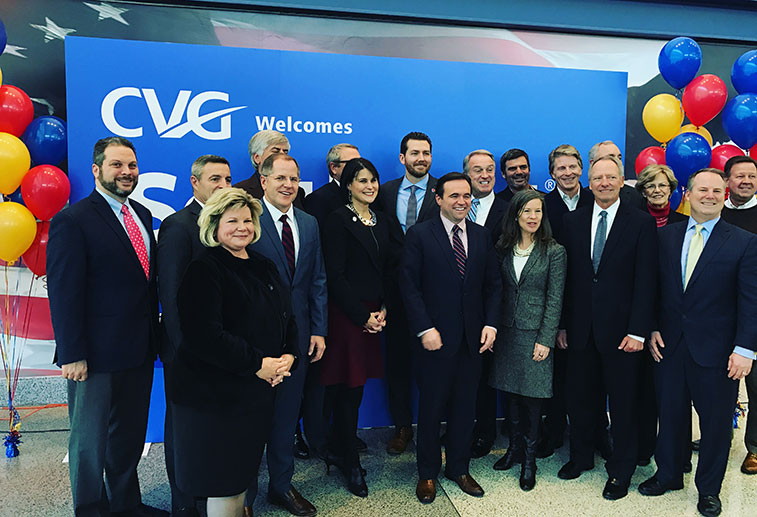 It’s a big day when Southwest Airlines announces it is going to start operations at your airport. For Cincinnati/Northern Kentucky International Airport (CVG) that day was Wednesday 4 January 2017. The pioneering low-fare carrier will start serving CVG from 4 June 2017 with multiple daily flights from Baltimore/Washington and Chicago Midway. No wonder everybody’s smiling …

Cincinnati Airport (CVG), also know as Cincinnati/Northern Kentucky International Airport, has had an exciting start to 2017. On 4 January the airport, which is located in the state of Kentucky but primarily serves Cincinnati (which is in Ohio), announced that Southwest Airlines would start its first ever services to the airport in early June from Baltimore/Washington and Chicago Midway. Six days later the airport celebrated its 70th birthday. In addition passenger numbers were up in 2016 by 7%, the third year in succession that demand at the airport has increased. Cincinnati used to be a major hub for Delta Air Lines, but following the airline’s filing for Chapter 11 bankruptcy in September 2005, it has resulted in major route reductions at the airport while the merger with Northwest Airlines in 2008 saw further cuts to the airline’s network. From handling almost 23 million passengers in 2005, Cincinnati was handling fewer than six million by 2013. The big dip in 2001 passenger numbers was caused by a three-month strike of pilots and Comair, who operated flights on behalf of Delta at the airport. 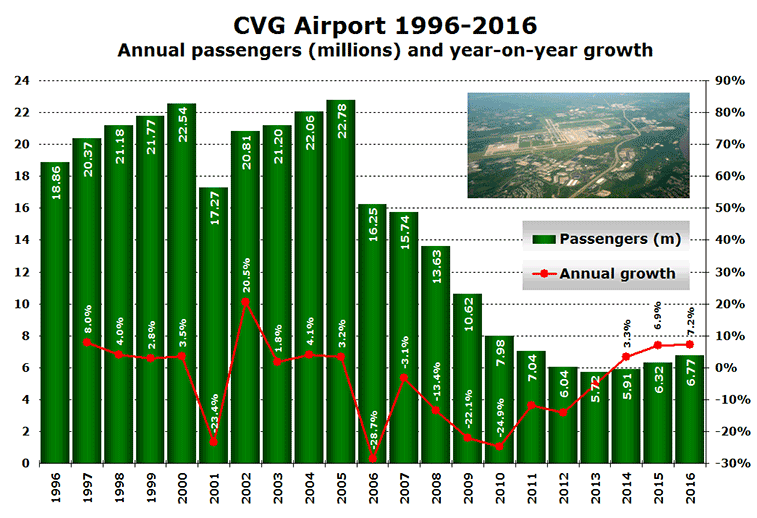 Since then passenger numbers have picked up as the airline has attracted new carriers. Frontier Airlines arrived in May 2013 (with service to Denver) and Allegiant Air in February 2014, but according to OAG schedule data for 2016 Delta remained the airport’s busiest airline and still accounted for 51% of all scheduled seats and 49% of flights, ahead of American Airlines (17% of seats), United Airlines (11%), Frontier Airlines (10%) and Allegiant Air (9%).

Demand at the airport normally peaks in either June (2013, 2014 and 2016) or July (2015). Using anna.aero’s Seasonal Variation in Demand (SVID) calculator the airport scored an “Excellent” 1.41 showing a relatively low level of seasonality. 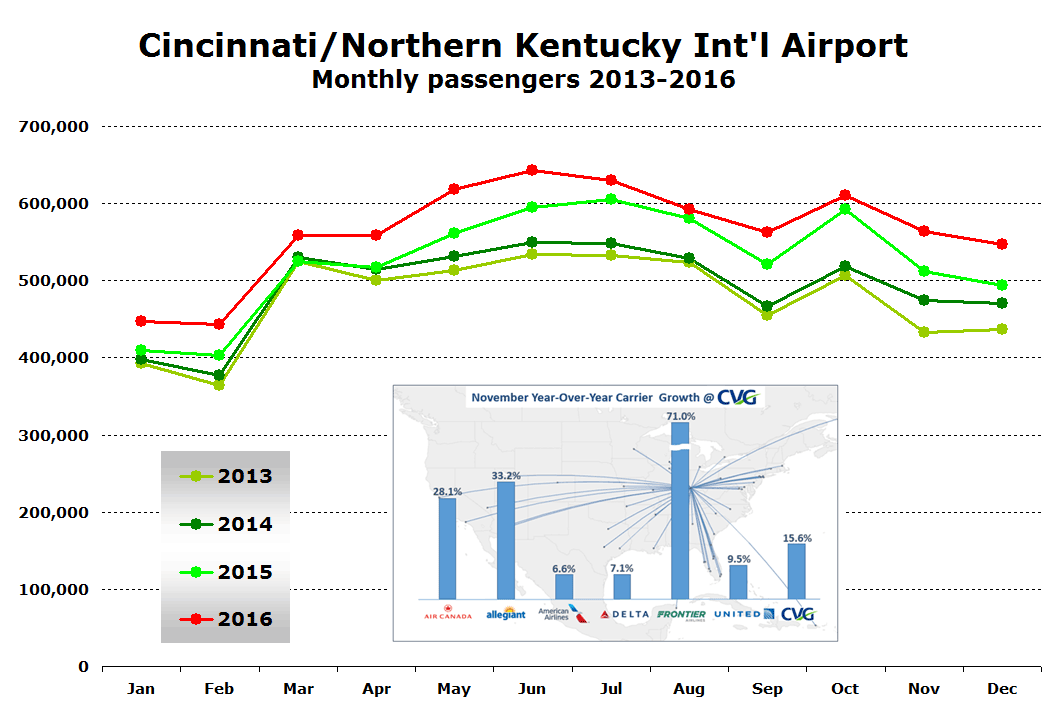 Looking at OAG schedules for the last two years, the airport’s top two routes (by some distance) are to Atlanta (Delta’s biggest hub) and Chicago O’Hare. All three major New York airports are served with LaGuardia and Newark having more capacity than JFK. Only two of the top 12 routes (Atlanta and Dallas/Fort Worth) did not see capacity growth in 2016 compared with 2015. Denver saw the biggest increase among the top 12 routes with Frontier adding capacity in its battle with Delta and United on the route. 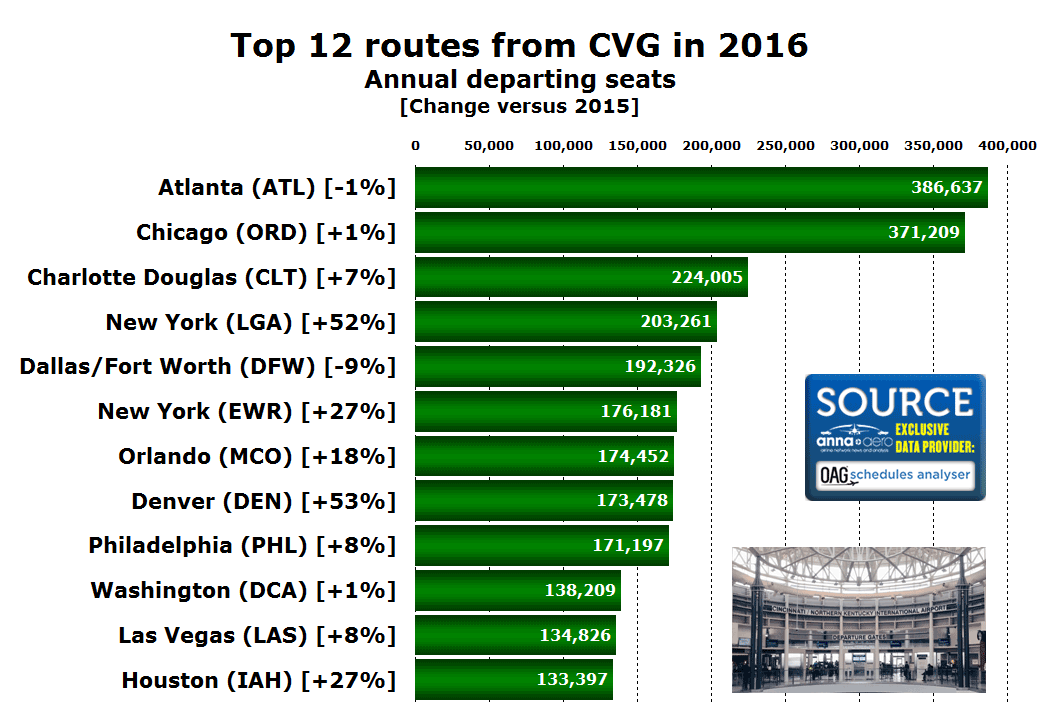 All of the top 12 routes are served by at least two carriers during the peak summer season. Some routes such as Chicago O’Hare, Dallas/Fort Worth, Denver, Houston Intercontinental, Las Vegas and Philadelphia were served by three carriers last summer. New services launched from Cincinnati in 2016 included: Allegiant Air to Baltimore/Washington, Destin-Fort Walton (in Florida), Newark and San Juan in Puerto Rico; American Airlines to LaGuardia (in January); Frontier Airlines to Houston, Los Angeles, Philadelphia, Los Angeles and Tampa; and OneJet to Pittsburgh.

International services are currently quite limited. Air Canada and Delta both serve Toronto Pearson and there are a mix of seasonal and charter services to Mexico and various points in the Caribbean. The only long-haul service is Delta’s route to Paris CDG, the home hub of Delta’s European SkyTeam partner Air France. 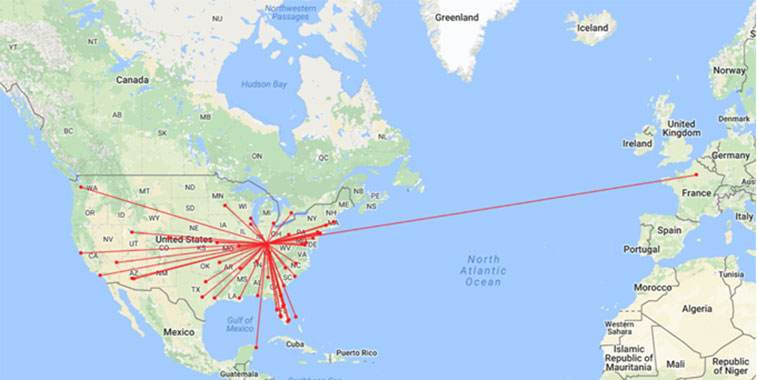 Cincinnati’s network is dominated by domestic US routes but the airport does offer scheduled non-stop service to Cancún, Paris CDG and Toronto Pearson as well as seasonal, charter flights to various leisure destinations in the Caribbean and Latin America.

Cincinnati fares falling as Allegiant and Frontier continue to grow

For many year Cincinnati had the reputation as being one of the most expensive airports in the US for flights. According to US DOT air fare data the airport regularly ranked among the top three priciest airports for passengers. This has started to change since the arrival of Allegiant and Frontier. Between 2009 and 2014 Cincinnati’s fare premium in the second quarter of each year, compared with the US average, was between 30% and 40%. However, in 2015 Q2 this had fallen to 21% and the latest figures for 2016 Q2 show it down to just 14%. The arrival of Southwest is likely to push this premium down even further. 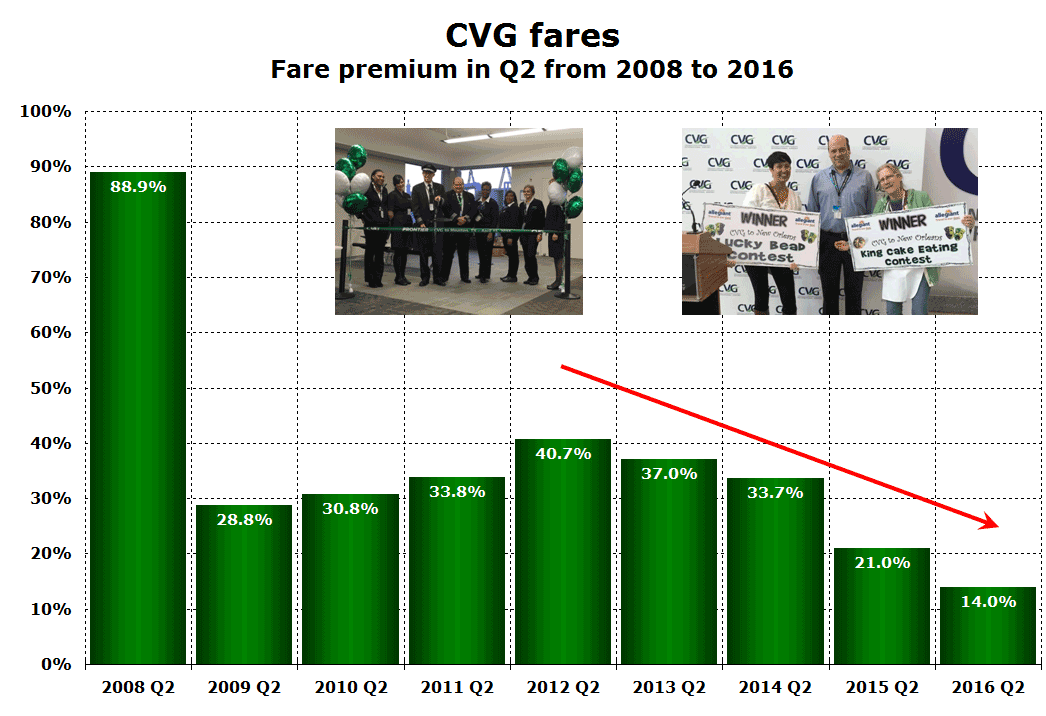 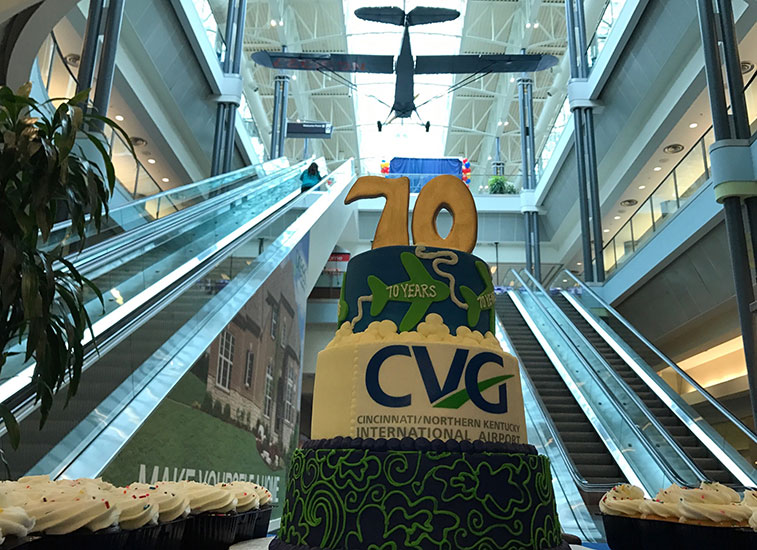 Cincinnati Airport celebrated its 70th birthday on Tuesday 10 January with a surprise celebration for passengers including a birthday cake. The airport’s three-letter code of CVG refers to Covington, the name of the nearest village/town when the airport opened for flights back in 1947. After Delta’s major cutbacks at the airport between 2005 and 2013 passenger numbers have now grown three years in a row thanks to new carriers such as Allegiant Air and Frontier Airlines.