South Korea to Japan grows by 25% year-on-year; Korean Air is #1 airline on the country pair On 7 October last year Air Seoul, a subsidiary of Asiana Airlines, started flying internationally. Its first route was to Takamatsu, followed a day later by Shizuoka, both in Japan. The carrier replaced Vanilla Air, an LCC owned by All Nippon Airways, in the top 12 airlines flying between South Korea and Japan.

Some country pairs constantly seem to crop up in our Latest Airline Route News section week after week – one of those is South Korea to Japan. Initial investigation reveals that our data elves’ hunch has proven correct, as the number of seats being flown this January when compared to the same month last year is up 25%. Bizarrely, this huge growth comes despite the fact that the net number of airport pairs between the two countries has remained static. In terms of the South Korean airports with scheduled non-stop links to Japan there are five: Seoul’s Incheon and Gimpo airports; as well as Busan, Daegu and Jeju. Again referring to this week’s schedules, by contrast the number of Japanese airports is far more substantial, standing at 23. 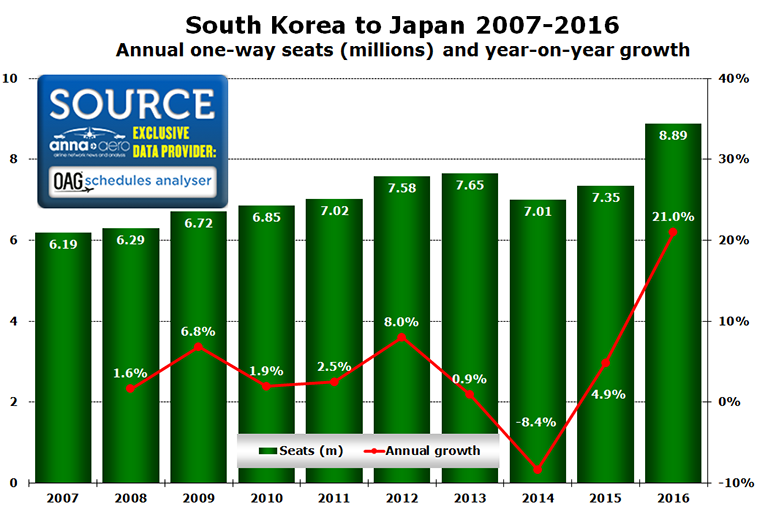 Referring to the above graph, the explosion in growth between the two countries has not been limited to the last 12 months, with a substantial double-digit increase also noted between 2015 and 2016. The travel boon is clearly a recent phenomenon, as the growth during the remainder of the period being analysed is far less noteworthy. The drop in seats between 2013 and 2014 is hard to pin-point to one carrier or event, with nine of the serving carriers posting capacity reductions year-on-year, including the two main incumbents Korean Air and Asiana Airlines, plus Delta Air Lines withdrew its operations between the two nations.

The number one airline between South Korea and Japan, in terms of annual one-way seats, is Korean Air, with nearly a third (31%) of all capacity being flown. The SkyTeam member has grown by 8.0% year-on-year, further extending the gap over the second largest carrier Asiana Airlines, which increased its own weekly seats by a marginal 1.7% since last January. These two Korean heavyweights offer more than half of the seats (53%) in the market when combined. The number of airlines flying between the two countries this January is the same as a year ago – 12 – however the arrival of Air Seoul, the Asiana LCC subsidiary, over the past 12 months acts only as a replacement for the loss of Vanilla Air, wholly-owned LCC from All Nippon Airways (ANA). 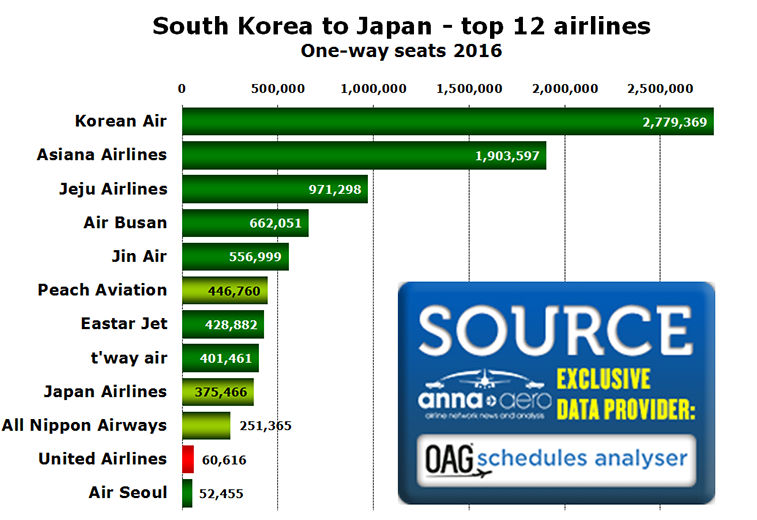 The fastest growing carrier in this market is Jin Air, which has grown 138% from the same week last year, ahead of Eastar Jet with a far from sluggish 97% annual increase. The majority of airlines, and indeed capacity, emanates from the South Korean-end of the country pair (Japan’s three airline’s are highlighted in light green), with its eight carriers commanding 87% of the seats, up from 86% in January 2016. Both Japan Airlines and ANA have reduced their respective capacities, with the former falling by 19% and the latter by 1.2% year-on-year. In fact, the Japanese carriers are the only two of 12 serving airlines to have trimmed capacity since last January. The slight market anomaly in the top 12 is the inclusion of United Airlines, which maintains a presence in the region due mainly to a historical agreement allowing US carriers fifth freedom rights to other Asian countries from Japan.

From the South Korean end, it is not surprising to see that Seoul’s Incheon and Gimpo airports dominate capacity, with three-quarters of the top 12 utilising one of the capital city’s airports. On the Japanese side, Osaka Kansai has three entries, while Tokyo’s Haneda and Narita muster the same amount between them. The #1 city pair, has grown by 22% over the last 12 months, less than those achieved by the #2 (33%) and #3 (28%) routes. However, the fastest growing city pair in the top 12 is the 12th largest sector, which has witnessed a 128% increase in weekly seats in the last 12 months. This increase in capacity between Incheon and Haneda will partly explain the seat reduction on the only route in the top 12 to post a capacity reduction, a 3% cull on seats between Gimpo and Haneda. 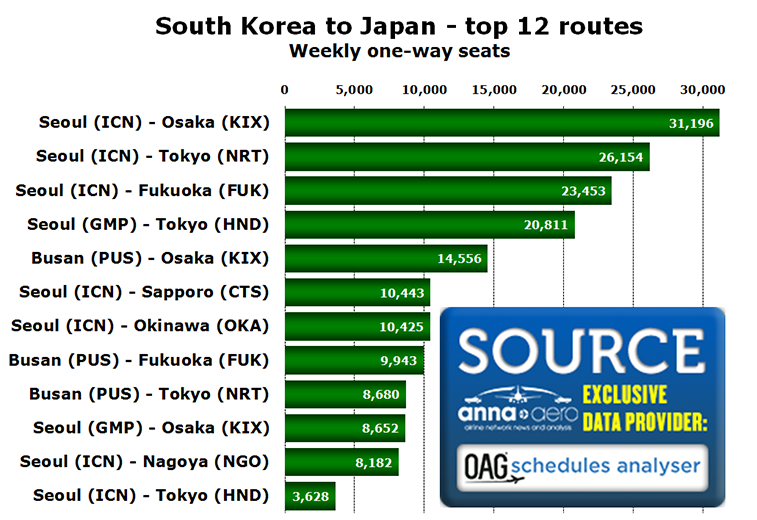 Currently there are 38 routes between South Korea and Japan, according to OAG schedules data. This is the same number as a year ago, however there has been some flux in the city pairs being served, with six being started and the same number being curtailed. Added in the last 12 months were new routes from Daegu to Fukuoka, Sapporo Chitose and Tokyo Narita; Busan to Kitakyushu; and Incheon to Nagasaki and Kitakyushu. Dropped from the roll call of sectors between the two Asian nations are Seoul Gimpo to Nagoya; as well as five routes from Incheon – to Matsuyama, Toyama, Kumamoto, Miyako and Asahikawa.

Nothing new planned – yet!

Looking ahead, there are currently no new routes planned between South Korea and Japan, according to anna.aero’s New Route Database, but given the pace of development, this situation is unlikely to last for long. What our data elves did notice were lots of new routes between Japan and China planned …hmmm…an idea for another article in the near future… 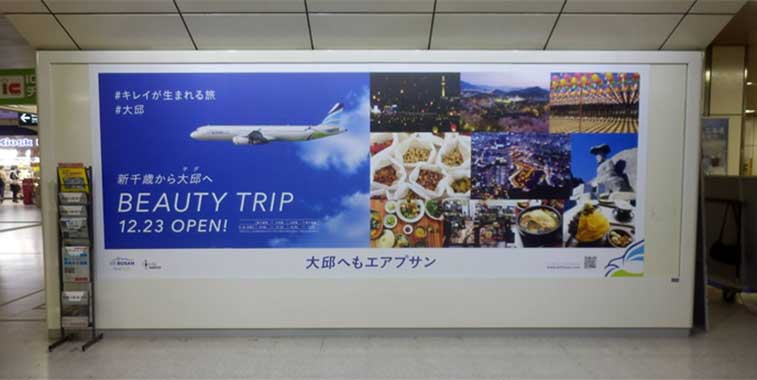 Air Busan is promoting its new route from Osaka to Daegu on the Osaka metro system. The new service began on 23 December 2016 and will be flown daily by the LCC’s A320s. Capacity on the route has grown by 188% year-on-year, but the city pair is only the 15th largest of the 38 between South Korea and Japan.