Thessaloniki Airport’s traffic is up 8.1% in 2016; handling 43% more passengers than it did in 2012; expansion plans delayed 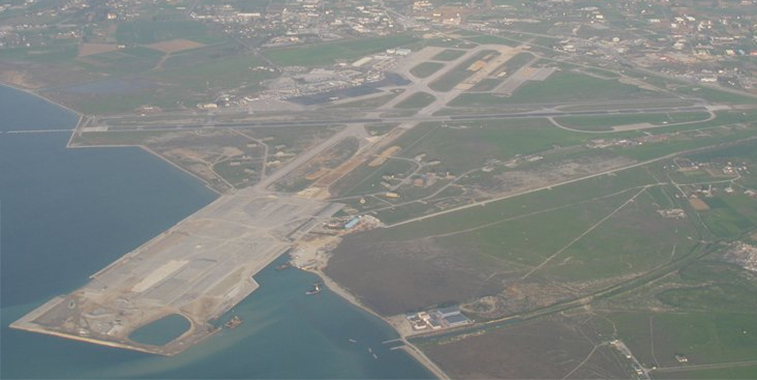 The extension of Runway 10/28 at Thessaloniki Airport was expected to be completed by July 2011, however work is still taking place due to various financial cutbacks, and the change of ownership of the airport to Fraport from being state-owned. The planning of a new passenger terminal is currently on hold. One of the main needs to increase the size of the airport’s operational capabilities is due to traffic rising 43% in the space of four years.

In 2012 Thessaloniki welcomed just under 4.2 million passengers. Between January and November that year, the total traffic level for the 11-month period was 3.9 million. For the same 11 months in 2016, the airport has welcomed 5.6 million passengers. This represents an increase in traffic between the two periods of 43%. When comparing the first 11 months of 2016 with same time in 2015, traffic has risen by 8.1% (422,334 more passengers). 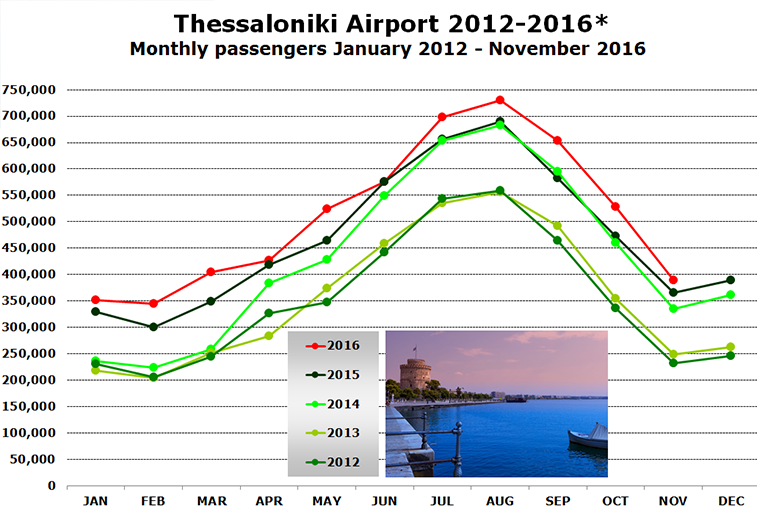 Traffic so far in 2016 is growing at an average monthly rate of 8.6%. The best performing month for growth in the 11-month period analysed is March, when traffic increased by over 16%. February, May, September and October all recorded double-digit increases in traffic also. The worst month on record for 2016 is June, when traffic grew by only 0.1% (just 545 more passengers). When taking the net increase in passengers into account, the best month for improvement was September, with the ninth month of the year welcoming an additional 71,264 passengers when compared to the same month of 2015.

Taking Thessaloniki’s monthly passenger statistics for 2015 and placing them into anna.aero’s Seasonal Variation in Demand (SVID) calculator, the airport performs well, generating a score of 8.74 – a “Good” rating. This score has improved from the 15.17 it generated in 2014 – a “Poor” rating.

Aegean Airlines is #1 carrier; some operations moved to Olympic Air

Aegean Airlines is Thessaloniki’s number one carrier, with the airline occupying 33% of monthly seat capacity from Greece’s third largest airport this summer. Despite its number one position, the airline has seen its Thessaloniki capacity shrink by 8.8% during the past 12 months. As well as its own flights, Aegean operates a number of routes for its subsidiary Olympic Air (highlighted in light red), namely its connections to Athens, Chania, Heraklion, Mykonos and Rhodes. According to OAG schedules, although it served Thessaloniki in 2016 with flights operated by Aegean, Olympic Air is operating some of its own flights into the city this summer. 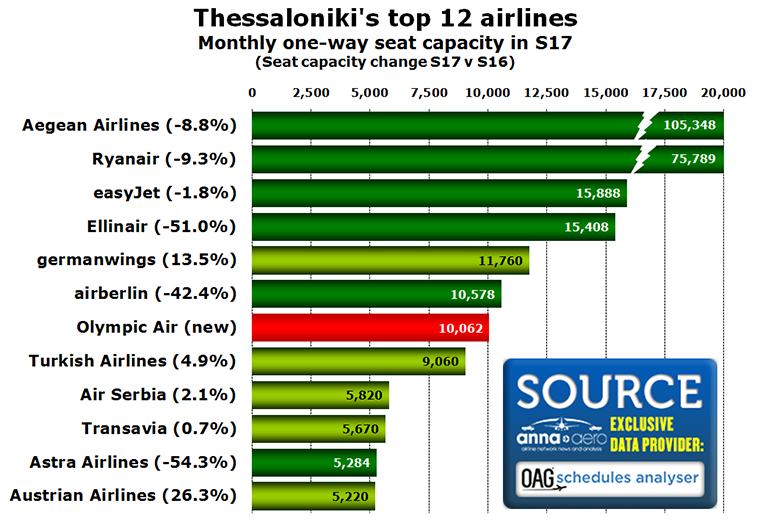 Only five of Thessaloniki’s top 12 airlines are recording capacity increases this summer when compared to S16 (highlighted in light green), with germanwings being the largest growing carrier, with its capacity up nearly 14% this year. Although germanwings flights (4U code) into Thessaloniki will be operated under the Eurowings brand, the latter carrier (EW code) will be the 22nd largest at the airport this summer. The airline has new routes to Munich and Salzburg which will commence at the start of S17. A total of 31 airlines will be operating into Thessaloniki in S17. Last summer the airport had 32, however Thomson Airways has not yet published its schedules data for this summer. Nonetheless, the UK airline has flights to London Gatwick, Manchester and East Midlands scheduled in its booking engine. The one airline that has been lost from Thessaloniki’s departure boards this year is Russian carrier UTair.

Athens, by quite some distance, is the number one route from Thessaloniki. The connection to the Greek capital occupies 20% of overall seat capacity this summer. However, monthly seat capacity to Athens has shrunk by nearly 20% during the past year. Along with Athens, the domestic connections of Chania and Heraklion (highlighted in light green) in Crete make it into the top 12 routes from Thessaloniki, cementing themselves as the top three domestic routes from Greece’s third largest airport this summer. 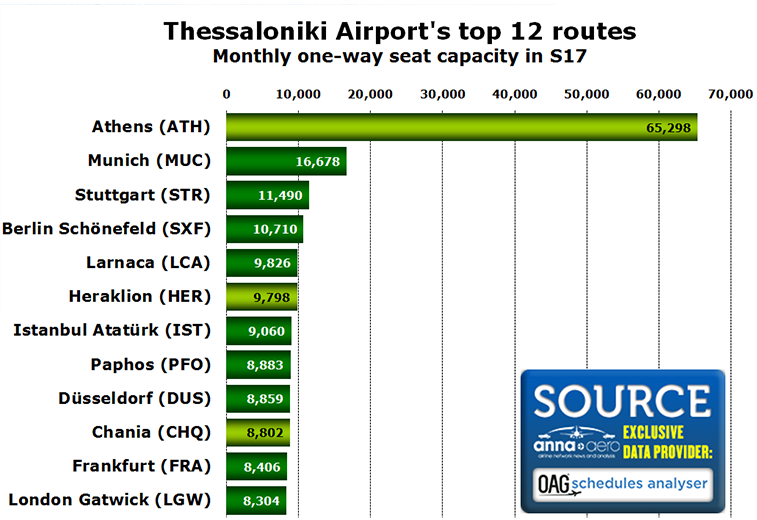 On the international front, Munich has overtaken Düsseldorf to become the number one non-Greek connection, helped with Eurowings opening the route later this year. As a result of Eurowings’ venture, summer seat capacity to Munich will have grown by 28% this summer when compared to S16, while Düsseldorf sees its offering cut by 42%, resulting in it dropping from second to ninth this coming summer. In total Thessaloniki will be connected to 77 destinations in S17.

Ryanair is the second largest airline at Thessaloniki, and this summer it will introduce four new routes to its network at the airport, namely to Copenhagen, Dortmund, Gothenburg and Hamburg. Within the past year the airline has also welcomed Berlin Schönefeld to its Thessaloniki network, a route it operates daily. However, despite its route portfolio increasing, the airline’s overall seat capacity to its northern Greek hub will fall by 9.3% this summer when compared to S16, a result of it cutting capacity on its route to Athens by 54%. Along with Greek capital, the Irish ULCC is also cutting capacity to Rome Ciampino (-19%) and Stockholm Skavsta (-25%) this summer, while flights to Oslo Rygge have ended. Nonetheless, its routes to Girona, Karlsruhe/Baden-Baden and Bologna will all welcome a 12% rise in monthly seats. In total Ryanair will be offering 21 routes from Thessaloniki, up from 17 last year.

Jet2.com added to route map this summer; will EGYPTAIR join?

One new airline for Thessaloniki this summer will be UK airline Jet2.com. The carrier will commence flights to the Greek city from Manchester (twice-weekly), Edinburgh, Leeds Bradford and East Midlands (all weekly). All Jet2.com flights are currently scheduled to be operated by its mixed fleet of 737s.

Although it has not been confirmed, speaking at an event in Thessaloniki in November, Salah Tawfik, Regional Director Greece and Cyprus for EGYPTAIR announced that from 1 June the airline will begin a four times weekly link from Cairo. Although this is not yet confirmed, it would mean that for 2017 there would be 33 airlines serving Thessaloniki, with Cairo becoming the airport’s only African link. 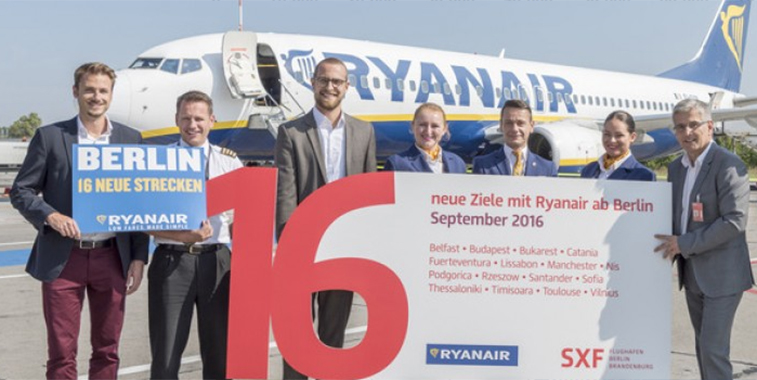 Ryanair will introduce four new routes from Thessaloniki this summer, namely Hamburg, Gothenburg, Copenhagen and Dortmund. One route that the airline has already introduced within the past year is Berlin Schönefeld, with Thessaloniki being one of 16 new routes launched from the German capital airport in September. Despite the airline’s increasing route portfolio, its overall seat offering to Thessaloniki this summer will be down by 9.3%, a result of it cutting capacity on its Athens connection.

Thessaloniki has seen a 1,150-metre extension to its Runway 10/28 commence. The extra concrete will result in the runway being 3,440 metres in length, allowing the airport to be able to accept aircraft up to the size of the A380. A date of July 2011 was originally set for the completion of the project, but due to financial problems of the manufacturing company that was in charge of the project, and the reactions of environmental organisations and residents of the surrounding areas, the project has been held back. A new completion date for December 2012 was set, only to be pushed back further to July 2013 and then December 2015. However to this day the runway is still not complete.

In December 2015 the privatisation of Thessaloniki and 13 other regional airports in Greece was finalised with the signing of the agreement between the Fraport AG/Copelouzos Group joint venture and the state privatisation fund. With private ownership, it is hoped runway extension work will be completed in the not too distant future. Along with the runway extension, the airport also has in its masterplan a new terminal design. The new terminal will have a capacity for eight million passengers per annum. Originally released in Thessaloniki’s 2011 masterplan, the project has yet to be built. However, before the purchase of Thessaloniki by Fraport, it was hoped that the investment for the building at the then government-run airport would come from private funding, the same concept that was implemented at Athens for its expansion. 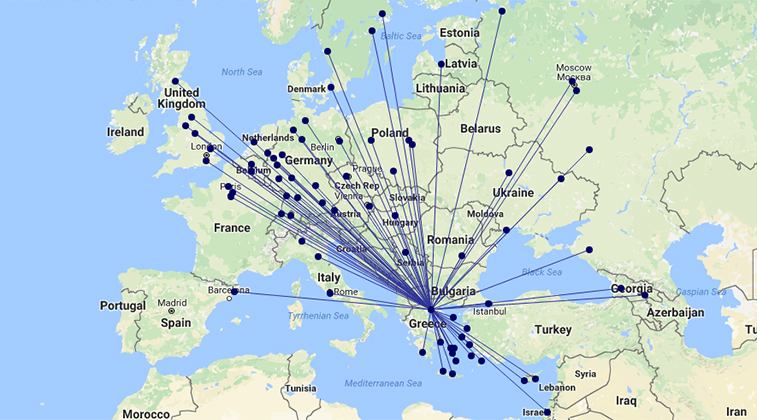 Thessaloniki Airport this coming summer will be connected to 77 destinations. New routes for the third largest airport in Greece in S17 include Edinburgh and Leeds Bradford with Jet2.com, along with Gothenburg, Dortmund, Copenhagen and Hamburg with Ryanair. Another route that could be joining the airport’s route map is Cairo, with EGYPTAIR’s regional director for Greece and Cyprus stating that the airline could begin flights from 1 June at a four times weekly frequency.