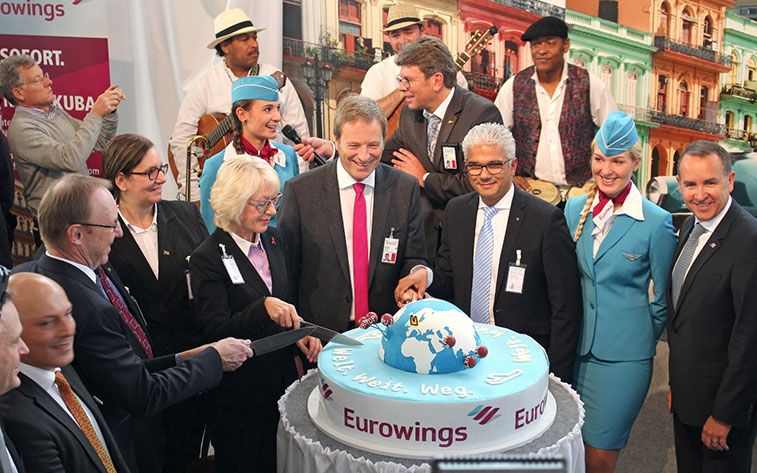 According to our analysis of OAG data for this coming summer there will be 72 airports worldwide offering at least one low-cost long-haul (LCLH) flight per week. These airports will wave off 903 weekly departures operated by 17 different airlines. Our definition of long-haul is anything over 4,500 kilometres (which is consistent with our definition when determining winners in our annual ANNIE awards). For the sake of simplicity we will use the classification of low-cost airlines used by OAG.

Using the first week of August as our analysis period, and comparing it with last year, reveals that in terms of weekly flights offered Norwegian has overtaken AirAsia X to become the world’s #1 LCLH carrier. With flights to the US from four Scandinavian airports (Bergen, Copenhagen, Oslo Gardermoen and Stockholm Arlanda), London Gatwick, Paris CDG and starting in June, Barcelona, the carrier has increased its long-haul flights this summer by 34%. AirAsia X, operating from its sole base in Kuala Lumpur, has also increased its offering, but by a more modest 10%. It recently revealed that Wuhan in China would be its next new destination with four times weekly flights starting in March. However, in terms of seat capacity AirAsia X still leads the way as it flies 377-seat A330s compared with Norwegian’s fleet of 787-8s (291 seats) and -9s (344 seats).

Another point to consider is that of AirAsia X’s 19 routes from KUL this summer only 10 are longer than 4,500 kilometres, with all the others being between 3,000 and 4,500 kilometres. In contrast, all of Norwegian’s ‘long-haul’ routes easily meet the 4,500-kilometre threshold, with the airline’s London Gatwick to Boston route being the shortest at 5,267 kilometres. 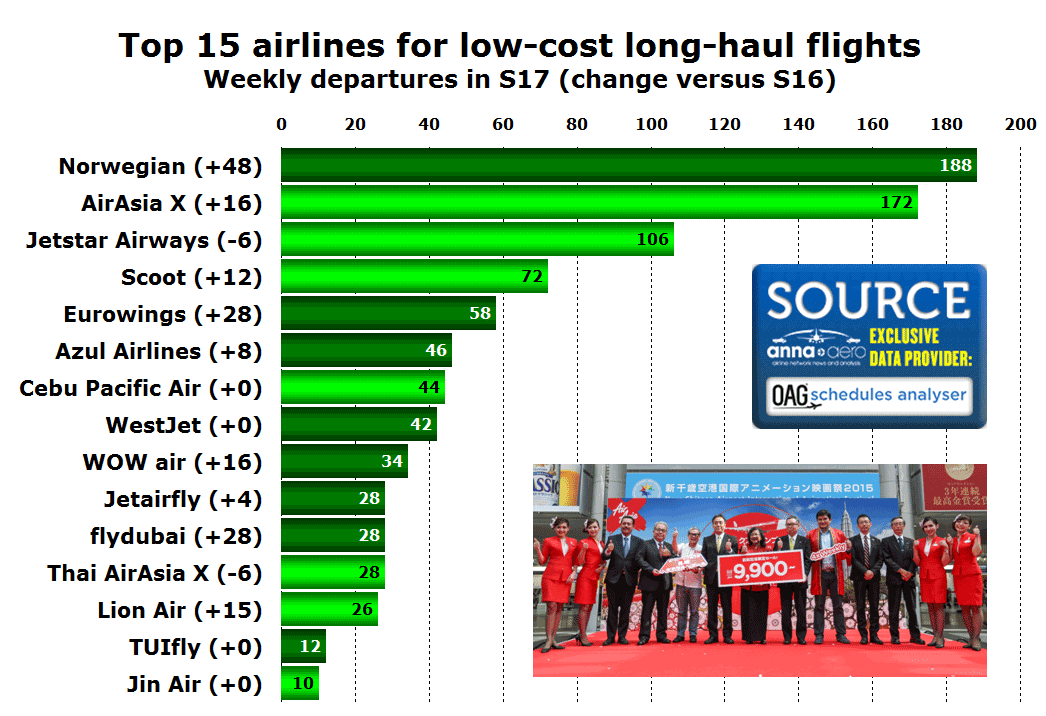 Australia’s Jetstar Airways and Singapore-based Scoot rank third and fourth this year followed by Eurowings, which jumps from ninth to fifth. The Cologne Bonn based carrier, a subsidiary of Lufthansa, has almost doubled its weekly flights from 30 to 58. Since last summer the carrier has added new services to Havana (Cuba), Las Vegas (US), Miami (US), Montego Bay (Jamaica), Orlando (US), Seattle-Tacoma (US) and Windhoek (Namibia). “With Eurowings, Cologne Bonn has a low-cost long-haul service. The route network will be extended in 2017 with some exciting destinations added. Low-cost long-haul is still in its infancy and I am convinced this will be a success story. Cologne Bonn will develop over time from a point-to-point airport to become a hub for connecting passengers of the low-cost long-haul,” suggests Michael Garvens, Chairman of the Management Board, Flughafen Köln Bonn GmbH.

Of the top 15 LCLH airlines, seven are based in Asia (shown in bright green) while five are based in Europe, with one each in the Middle East (flydubai), North America (WestJet) and South America (Azul Airlines). While WestJet and Azul have complemented their narrow-body short-haul fleets with a few wide-body aircraft (A330s for Azul and 767s for WestJet) flydubai’s twice-daily service to Bangkok (a distance of 4,900 kilometres) is operated by its 737-800s.

While the number of LCLH flights has increased by 20% this summer from 751 weekly departures to 903, the number of airports involved in these flights has actually fallen by one from 73 to 72. The busiest airport for LCLH services remains Kuala Lumpur thanks to AirAsia X’s operations. London Gatwick has moved ahead of Sydney into second place this summer and is the only non-Asian airport among the top six. In fact, Asian airports feature nine times in the top 15. Apart from London Gatwick the other non-Asian airports are New York JFK, Cologne Bonn, Los Angeles, Sao Paulo Viracopos and Dubai. 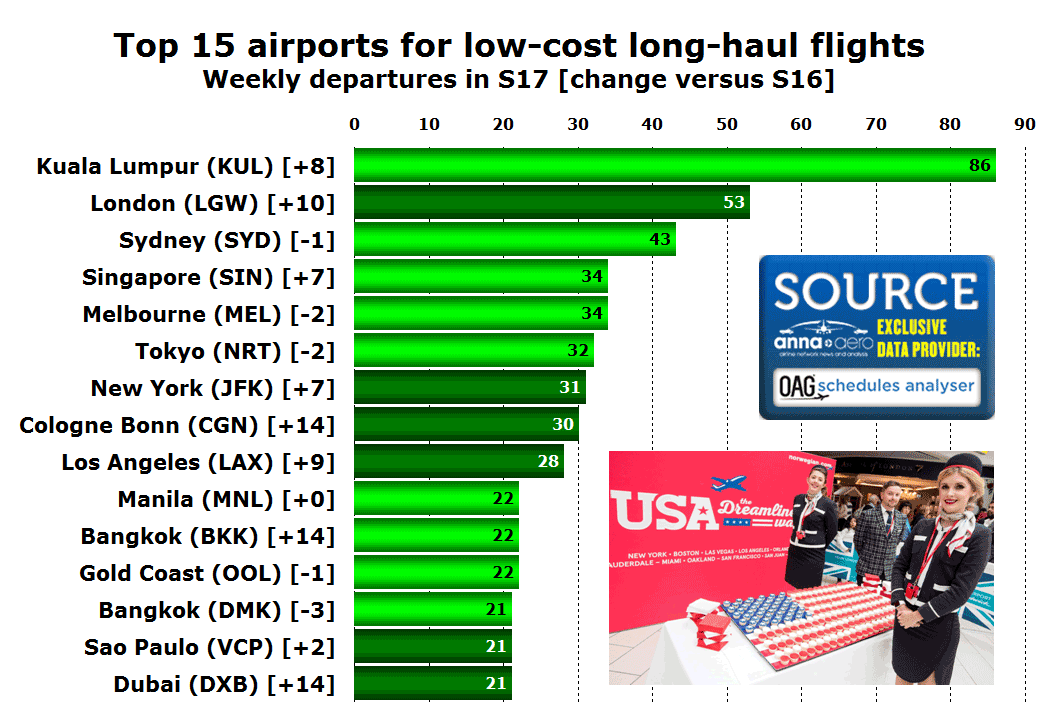 Three airports have seen an increase of 14 weekly departures. Bangkok Suvarnabhumi and Dubai have both grown by 14 flights because of flydubai’s launch of twice-daily flights on 29 November 2016. Cologne Bonn’s increase by the same amount is explained by the launch of several new lower frequency destinations.

Last summer WestJet began operating non-stop from London Gatwick to six destinations in Canada; Calgary, Edmonton, St. John’s, Toronto Pearson, Vancouver and Winnipeg. All of these were operated using 262-seat 767-300s with the exception of the shorter St. John’s route which was flown using a 130-seat 737-700. The Calgary, Toronto Pearson and Vancouver routes were already flown by Air Transat, while Air Canada Rouge provided additional competition on the Toronto Pearson route. Using UK CAA data we can reveal that WestJet carried some 36,000 passengers between May and October on the St. John’s route, 23,000 on the Edmonton route and almost 10,500 passengers on the Winnipeg route. Estimated average load factors across the period were 83% for St. John’s, 93% for Edmonton and 91% for Winnipeg.

However, despite these excellent load factors WestJet’s OAG schedule data for S17 shows that the Edmonton route will operate only 20 times in the upcoming S17 season (compared with 45 times in S16), while the Winnipeg route has been cut from 22 flights in S16 to just 10 flights in S17. Frequencies on the remaining routes are currently unchanged.

Air France and IAG set to join the market

Looking further ahead, IAG has announced that it plans to start LCLH services from Barcelona in the not too distant future while Air France has talked about setting up an in-house LCLH carrier to fly from Paris. Market leader Norwegian meanwhile has apparently won its battle with US authorities and is planning significant growth across the Atlantic, notably from Ireland and possibly other UK airports. One thing seems clear; this is a market segment that is still evolving. 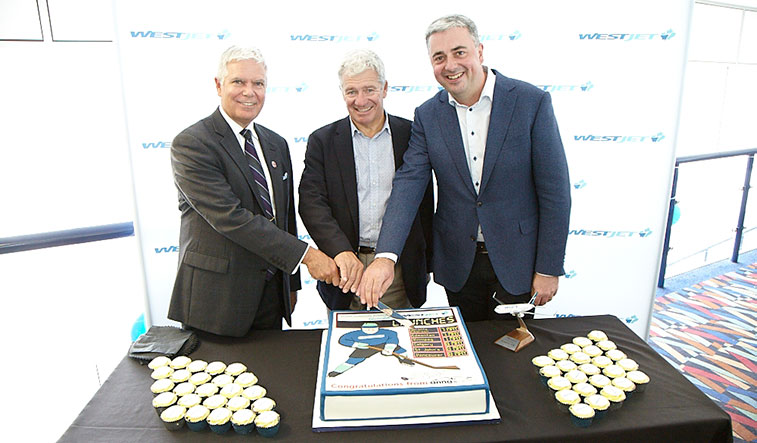 Last May WestJet began operations from London Gatwick to six Canadian destinations. All six routes will continue to operate in S17 although flights to Edmonton and Winnipeg have been reduced.