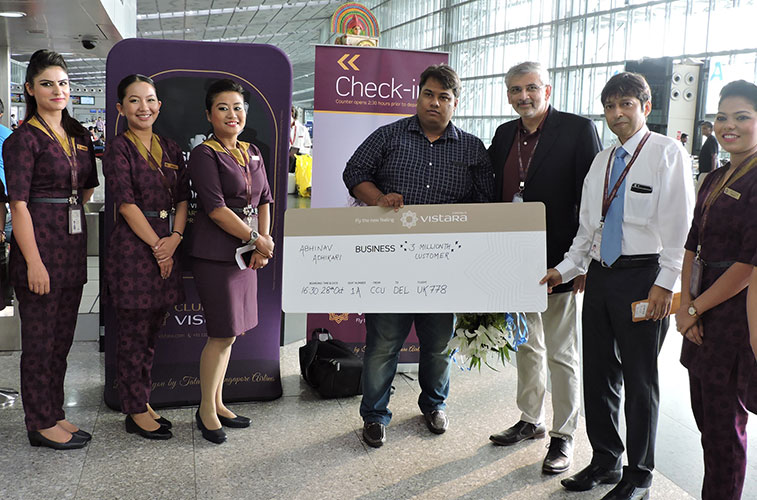 Vistara celebrated carrying its three-millionth passenger on 28 October 2016. The lucky passenger was flying on UK778 between Kolkata and Delhi. By the end of 2016 the airline had carried over 3.5 million passengers and had taken over 3% of the domestic market in December, a new record.

For Vistara, arguably India’s most stylish airline, 2016 finished on a high. For the first time in the airline’s brief history it carried more than 300,000 passengers in a single month, while the load factor of 85.1% also represented a new high for the airline (by five clear percentage points). In addition, its share of the Indian domestic market broke through the 3% mark for the first time. On 9 January the carrier, a joint venture between Tata Sons Limited of India and Singapore Airlines, celebrated its second birthday. The airline’s fleet has now reached 13 aircraft (all A320s configured in three classes with a total of 158 seats) and it currently serves 18 destinations across India. However, services to Varanasi will end in March due to runway maintenance works while two more destinations, Amritsar and Leh, will be added in March bringing the number of destinations served this summer to 19. In total the airline has now transported well over 3.5 million passengers. Load factors appear to peak in May and December. 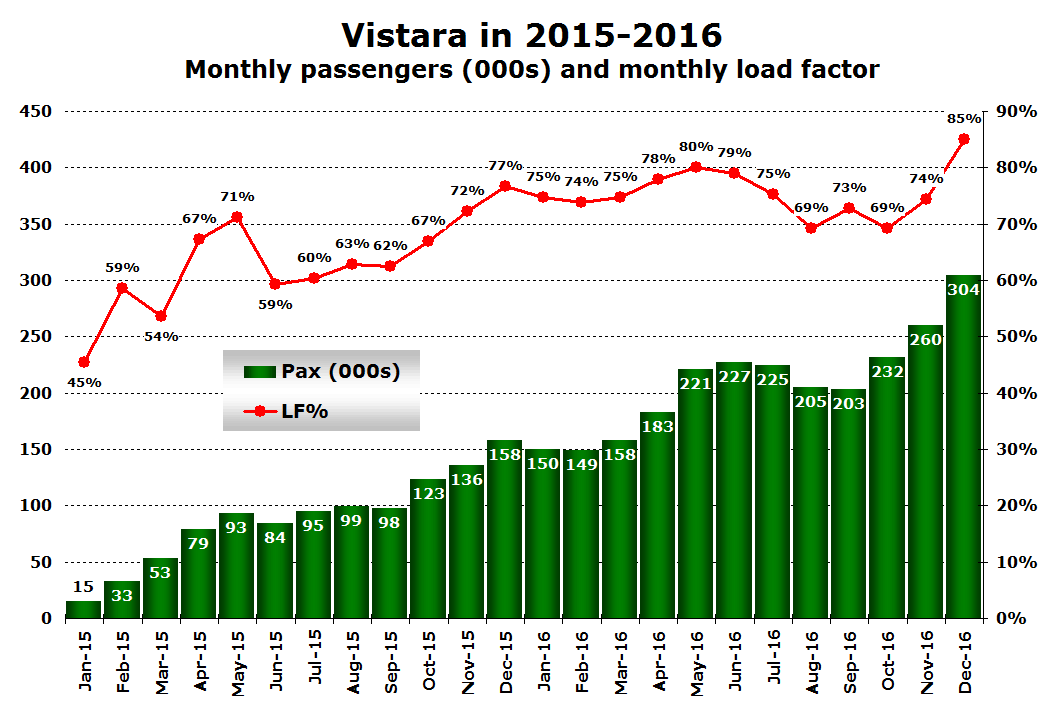 Delhi-Mumbai is top route for Vistara

Vistara’s most-served route is between India’s two biggest airports, Delhi and Mumbai, which is served between seven and eight times daily depending on the direction of travel and day of week. All of the airline’s route are typically served with at least daily flights, although for scheduling reasons frequencies on all routes are not necessarily the same in both directions, with the carrier operating a number of triangular routings. 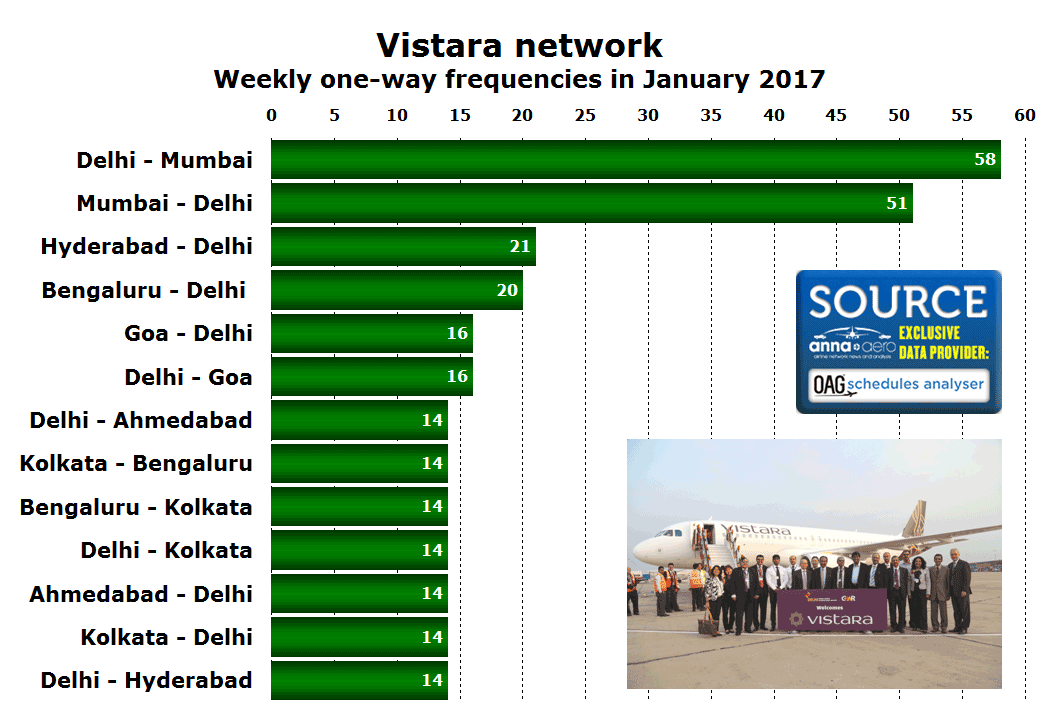 Chennai is biggest airport not served by Vistara

A total of 18 airports are currently served by Vistara across India with Delhi the airline’s main base. Vistara now has over 3% of domestic passengers, but its share of domestic airports that it serves varies between 2.0% in Hyderabad and 7.8% in Jammu. Analysis of Indian airport data reveals that the biggest airports at which Vistara has no presence at all are Chennai (ranked fourth among Indian airports), Thiruvananthapuram (ranked 11th), Jaipur (13th) and Kozhikode (16th). 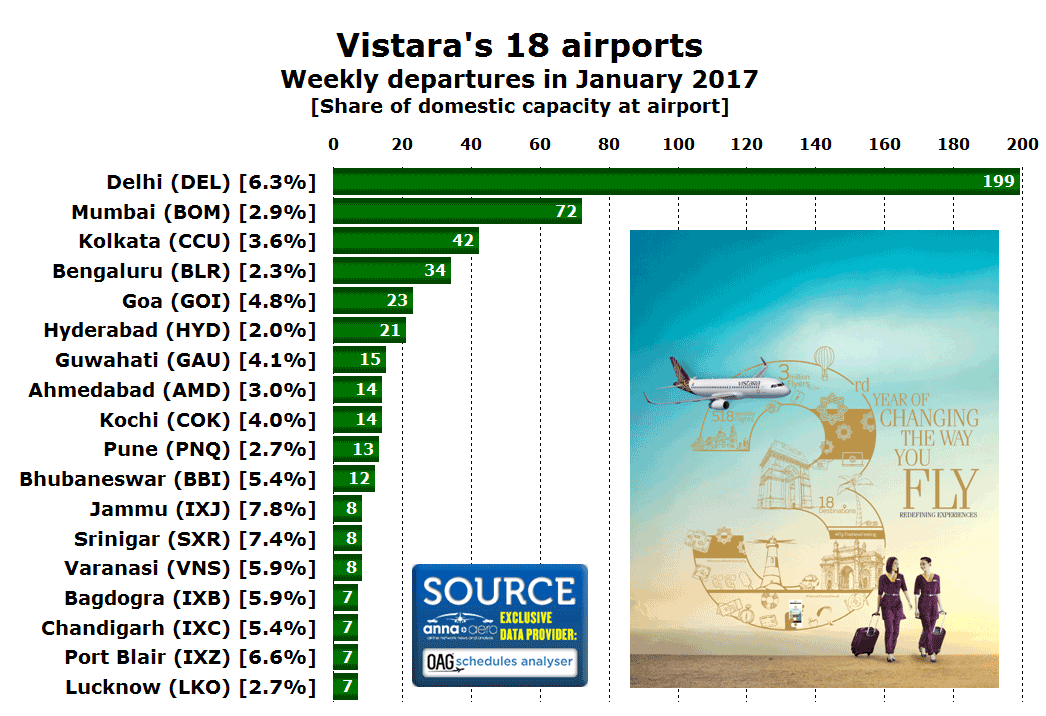 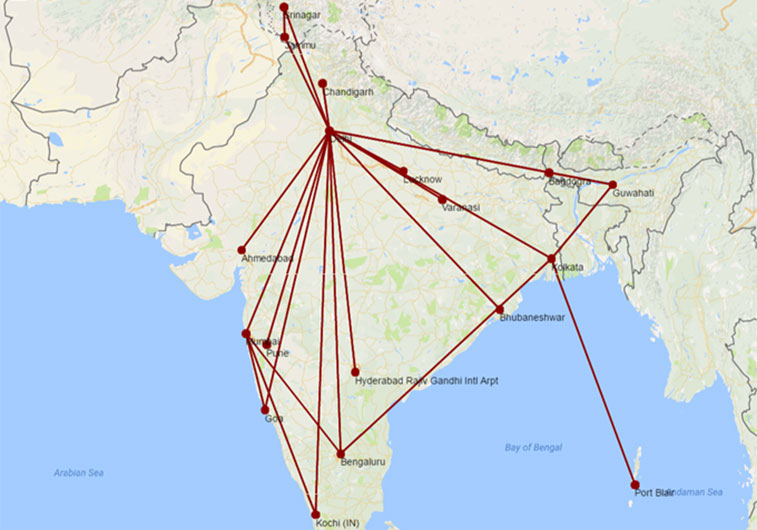 Vistara’s network currently comprises 18 Indian destinations. Flights to Varanasi will end in March while Amritsar and Leh will be added to the network, which is currently operated by a fleet of 13 158-seat  A320s.