Barcelona Airport traffic grows 26% since 2012 with it now handling 40+ million passengers a year; next battleground for low-cost long-haul 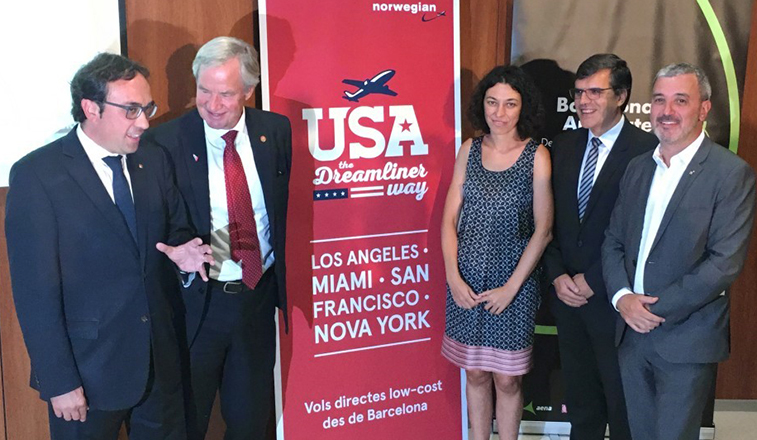 Last year Norwegian announced that Barcelona would be its next European hub for its low-cost long-haul venture, with the carrier opening routes to New York Newark, Fort Lauderdale, Oakland and Los Angeles. Norwegian is currently the fifth largest airline at Barcelona, with it occupying 3.1% of the market. The airline witnessed the passengers it carried grow by 53% from the Spanish city to 1.5 million in 2016.

Barcelona, nestled in north-east Spain, is the sixth most populated urban area in the EU after Paris, London, Madrid, the Ruhr area and Milan. In total around 5.35 million people live within Barcelona’s metropolitan area according to data collected in 2015. The city is served by Barcelona El-Prat Airport which sits 17 kilometres to the south of the city centre. As well as El-Prat, the airports of Girona (90 kilometres north) and Reus (77 kilometres south) also serve Barcelona and the Catalan region.

Last year Barcelona Airport processed just under 44.2 million passengers, an increase of over 11% when compared to the total of 2015, a year in which it welcomed 39.7 million passengers. This is the first time in recent history that Barcelona has passed the 40 million barrier. In 2016 Barcelona achieved six months when traffic passed four million passengers (May – October). In 2015 the airport only managed this feat in two months (July and August), while the same was also managed in 2014. 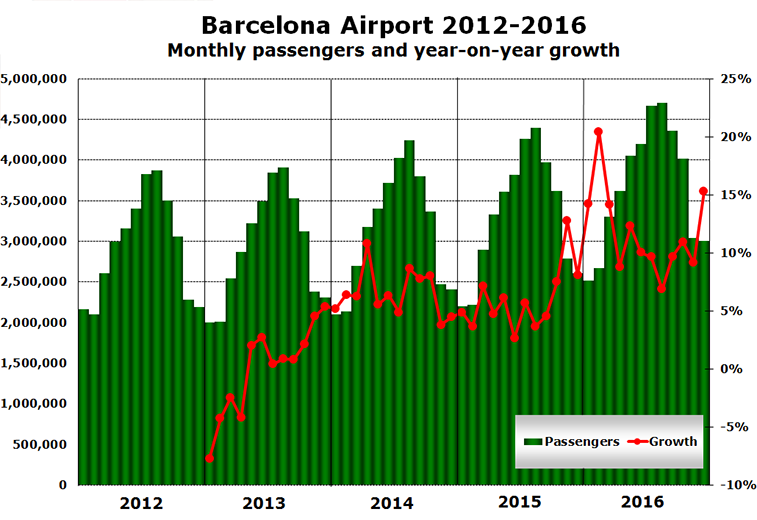 December marked the 44th consecutive month of growth for Barcelona, with the last month to register a negative figure being April 2013, when traffic fell 4.2% when compared to April 2012. During the past 48-month period, Barcelona has registered an average month-on-month increase in traffic of 6.1%. Taking Barcelona’s monthly traffic statistics for 2016 and placing them in anna.aero’s Seasonal Variation in Demand calculator (SVID) it performs well, generating a score of 4.71 – a “Good” rating. The result for last year is better than the 5.78 it generated in 2015. Although 5.78 still registers as good, it indicates that the traffic demand to Barcelona is adopting a flatter, more year-round profile.

Vueling commands with 36% of market

IAG LCC Vueling is the airport’s largest operator, with the carrier carrying 15.9 million passengers in 2016. This means that the airline flew 36% of passengers from Barcelona last year. The carrier confirmed its number one status at the airport in 2016 by seeing its passenger count grow by 8.0% when compared to the 14.7 million who flew with the airline from Barcelona in 2015. 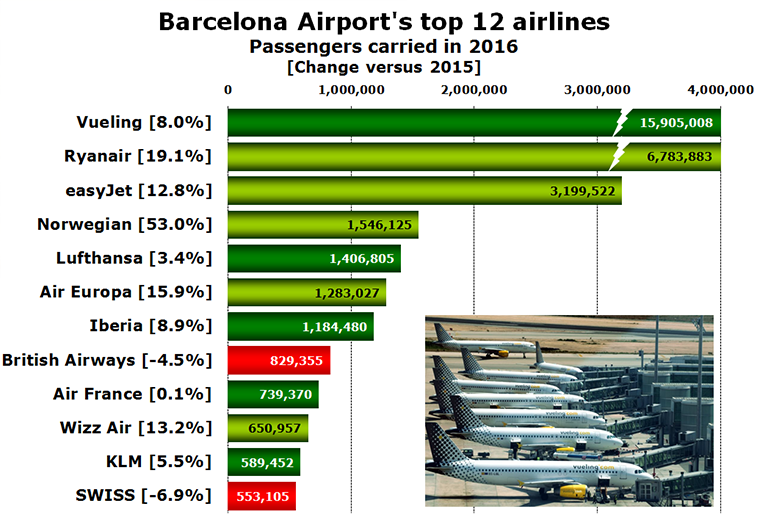 Four of the airport’s top 12 carrier’s (highlighted in light green) welcomed double-digit increases in passengers during the past year, with the leader being Norwegian, which reported a robust 53% increase in traffic. Of the top airlines, only two (highlighted in red) reported a drop in traffic from Barcelona last year. Overall the top 12 flew 79% of all passengers from Barcelona in 2016.

Vueling and Ryanair dominance is showing

Vueling has been the dominant carrier at Barcelona in recent times, with its share of seat capacity going from 9.7% in 2007 to nearly 37% in 2016. Of course one of the factors helping this impressive growth is its merger with Clickair in 2009, which allowed the airline to grow its market share from 18% to 26% in 2010. 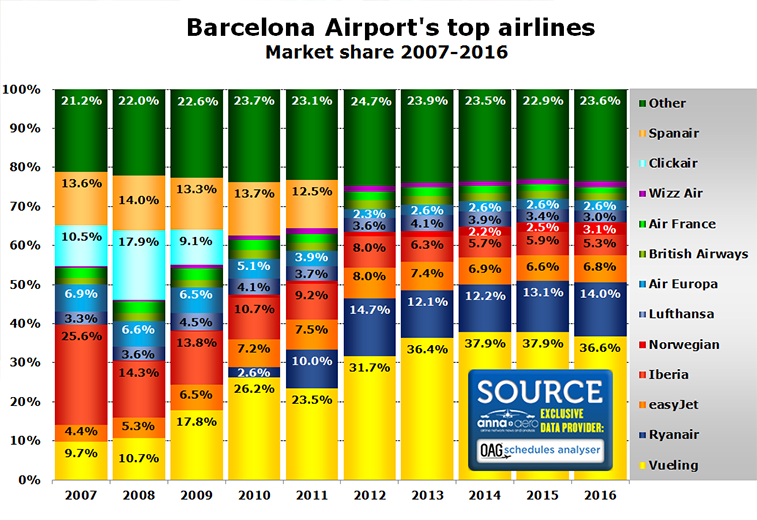 The #2 carrier at Barcelona is now Ryanair, an airline which only started serving the airport in 2010, opening a five-aircraft base on 1 September that year. When analysing the carrier’s schedules, it appears to still have only five 737-800s based at Barcelona this winter. Although it only operated for four months in 2010, the airline still flew 2.6% of all seats from the airport that year. Last year, Europe’s largest LCC had 14% of the Barcelona market, with the airport being the carrier’s fourth largest airport operation, sitting behind London Stansted, Dublin and Milan/Bergamo, but ahead of Madrid which is fifth.

As a collective, Vueling and Ryanair command just over 50% of all seats from Barcelona, while easyJet (6.8% of seats), Iberia (5.3%) and Norwegian (3.1%) control nearly 15%. One carrier which has lost out on the Barcelona market is Iberia, which has seen its own share of the market drop from a-near 26% to 5.3% during the past decade. Nonetheless it does codeshare on many of Vueling’s services due to both being part of the IAG Group.

Last year just under 15 million passengers flew on one of Barcelona’s top 12 routes. This means that the top 12 account for around 34% of traffic. The airport’s number one connection is to the capital, Madrid, a route which welcomed a 6.0% growth in traffic during 2016. Of Barcelona’s top 12 routes, four of them are domestic services (highlighted in light green), with two of those being airports in the Balearic Islands. 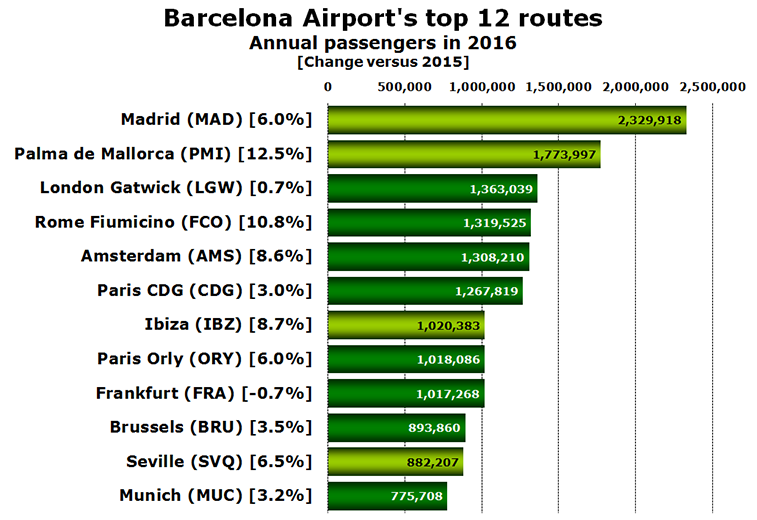 The number one international route from Barcelona is London Gatwick (third largest route), a connection which welcomed a 0.7% increase in traffic last year. Missing out on the top 12 is a second London airport – Heathrow – which sits in 13th. The route to Europe’s busiest airport was used by just under 746,000 passengers in 2016, which is 11% more than it welcomed in 2015. Barcelona’s most popular long-haul connection is Dubai (22nd largest route) which handled 532,000 passengers in 2016, up 21% when compared to 2015. 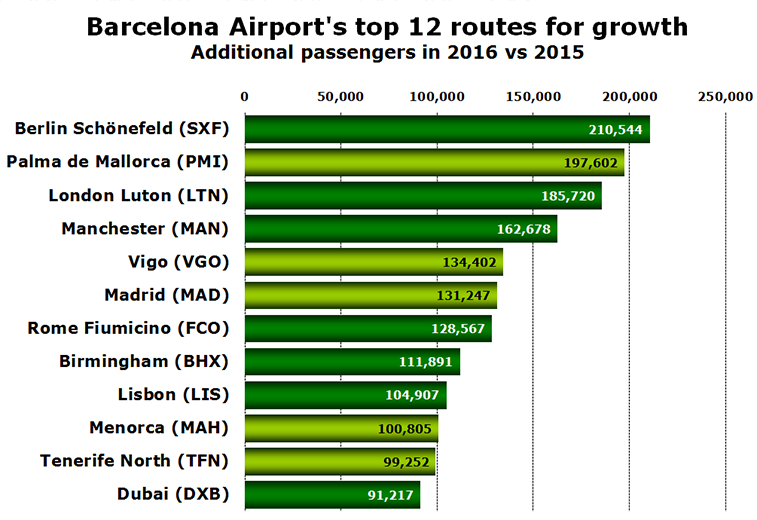 Although the domestic market is dominant in the top 12 growing routes, the leader when it came to a net passenger traffic increase last year was Berlin Schönefeld (24th largest route from Barcelona), with traffic on the airport pair growing by 72%. The connection from the German capital welcomed 502,000 passengers in 2016. Barcelona also has a direct route to Berlin Tegel (64th), with flights to the latter airport flown by Eurowings and Vueling. However, that airport pair has seen traffic drop by nearly 12% during the past 12 months, with 201,500 passengers choosing that routing in 2016. A factor helping to the contribution of Schönefeld’s impressive growth is due to Ryanair launching the route in October 2015, a connection this winter the ULCC is operating 10 times weekly. easyJet also offers a twice-daily service on the 1,503-kilometre sector to Schönefeld.

Norwegian first started operating from Barcelona in 2010. Today the carrier is the airport’s fifth largest airline and occupies 3.1% of the market. In S17 the airline will commence long-haul operations from Barcelona, with it becoming the carrier’s sixth European long-haul airport after Stockholm Arlanda, Oslo Gardermeon, Copenhagen, London Gatwick and Paris CDG. From Barcelona the airline will serve New York Newark, Fort Lauderdale, Oakland and Los Angeles, with the latter two being the only US West Coast services from Spanish city. In order to get an understanding as to why Barcelona was chosen by Norwegian for its next transatlantic venture, anna.aero has looked into the development of the Barcelona-US market during the past decade. 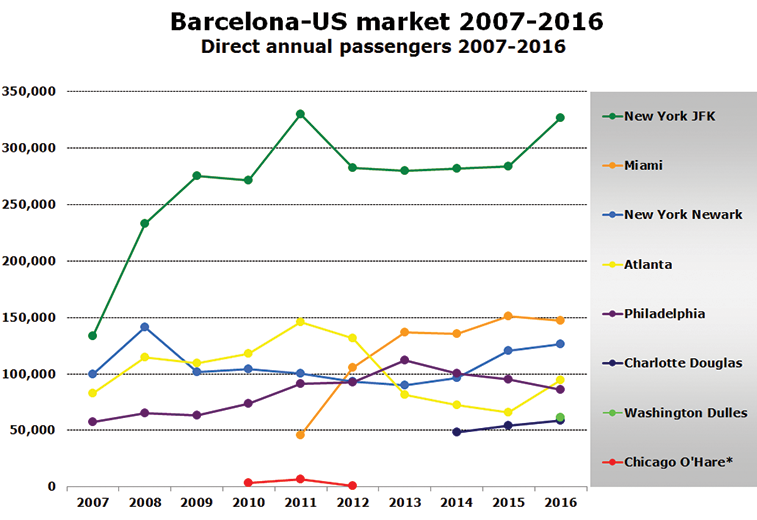 During the past 12 months one new route has opened up between Barcelona and the US, with that being United Airlines’ new connection from Washington Dulles which launched in May. Looking at Aena statistics and then comparing them to OAG schedules, it seems that United achieved an average load factor of just under 83% in its first season on the airport pair. Looking ahead to 2017, as well as the introduction of Norwegian’s US services, American Airlines will begin flights from Chicago O’Hare on 4 May. This will be the oneworld member’s fifth route to Barcelona after Miami, New York JFK, Charlotte Douglas and Philadelphia.

Between 2015 and 2016, traffic between Barcelona and the US grew by a healthy 17%, with just over 900,000 passengers travelling between the two last year. In 2015, 770,000 flew between the markets directly. The fastest growing route in 2016 was Atlanta, with traffic up 43% when compared to 2015. Of the six markets that were served directly in 2016 and 2015, the only two reporting a shrinkage in traffic are Philadelphia (-9.6%) and Miami (-2.3%). Overall in the past decade, traffic between Barcelona and the US has grown by 140%, with an average year-on-year increase of just over 11%. With an impressive double-digit average growth in the market between Barcelona and the US over the last decade, it is perhaps understandable to see why Norwegian believes it can make a success of long-haul operations from Barcelona. Not only is there a substantial and growing point-to-point market, but it will be able to bring more traffic through Barcelona with connections available to its existing European short-haul network from the Spanish city.

Looking at the two markets which Norwegian will be entering on the US East Coast which are already served, Newark and Fort Lauderdale (Miami), both have performed well in recent years. Newark has seen traffic rise on average 8.3% year-on-year since 2012, while for Miami it is 9.4% for the same period, despite it seeing a drop last year.

IAG, the parent of British Airways, Iberia, Aer Lingus and Vueling, has confirmed that it will launch a new low-cost long-haul (LCLH) airline operation from Barcelona Airport in S17. “Barcelona has become a significant airport hub and we believe that there is a demand for these flights from this growing hub,” the group said in a statement. Some of the destinations being considered for the new venture include Los Angeles, San Francisco, Buenos Aires, Santiago de Chile, Havana and Tokyo. Although Norwegian is adding flights from Barcelona to Los Angeles and Oakland, which would face competition from the new LCLH IAG carrier, the latter three would be new markets for the airport. However, Norwegian is looking into new routes to South America from Gatwick, so if this is successful for the airline we could see it attempt the South America market from Barcelona also.

Along with LCLH, other big gains for 2017 for Barcelona include the arrival of both Cathay Pacific Airways and Korean Air. The former will begin a four times weekly link from Hong Kong on 2 July, a route it will fly on its A350s, while the latter will see Seoul Incheon join the Spanish airport’s route map with a three times weekly rotation. Korean Air will serve the 9,590-kilometre route on its 777-200s starting on 28 April. 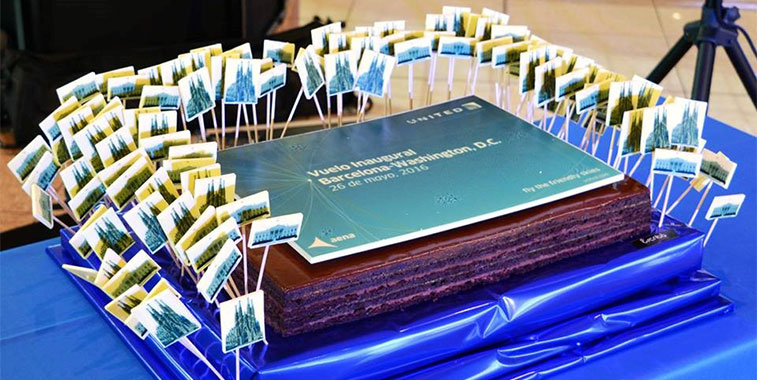 United Airlines launched flights between Barcelona and Washington Dulles in May. During its first year the route carried just over 61,000 passengers, representing an average load factor for the first season of 83%. The market between Barcelona and the US is poised to grow much faster in 2017 as Norwegian commences long-haul operations to New York Newark, Fort Lauderdale, Oakland and Los Angles, with the latter two being Barcelona’s only US West Coast services.