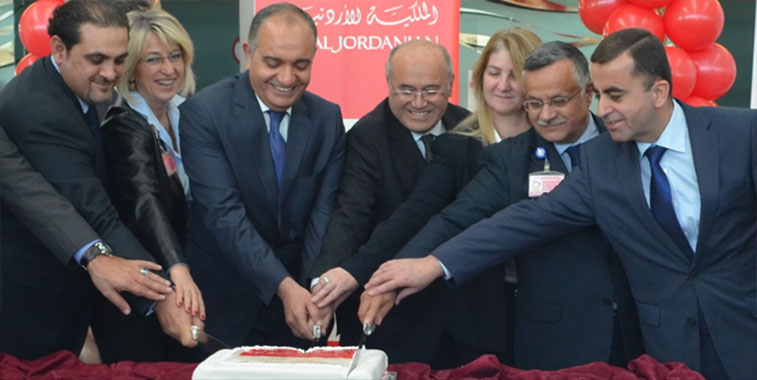 Royal Jordanian’s last three route launches – to Ankara (above), Guangzhou and Jakarta – have all proven ultimately unsuccessful, as none of them are still in operation just over a year later. The oneworld carrier now has a network of 46 destinations, down three from last year.

Royal Jordanian (RJ) is the 13th largest airline in the Middle East, naturally behind the likes of the MEB3 (Emirates, Etihad Airways, Qatar Airways), but it is also smaller than Europe-based (according to OAG regional splits) Turkish Airlines which is in 12th spot. The oneworld carrier operates eight different aircraft types – A310F (1); A319 (4); A320 (7); A321 (2); ACJ318 (1); 787-8 (6); E170 (3) and E190 (2) – across a total fleet of just 26 according to ch-aviation. This eclectic mix of aircraft perhaps helps to reveal some of the airline’s current problems, as it struggles to follow a clear strategic direction. RJ’s location in the Middle East and its heavy reliance on regional traffic will not be helping the carrier’s travails either. 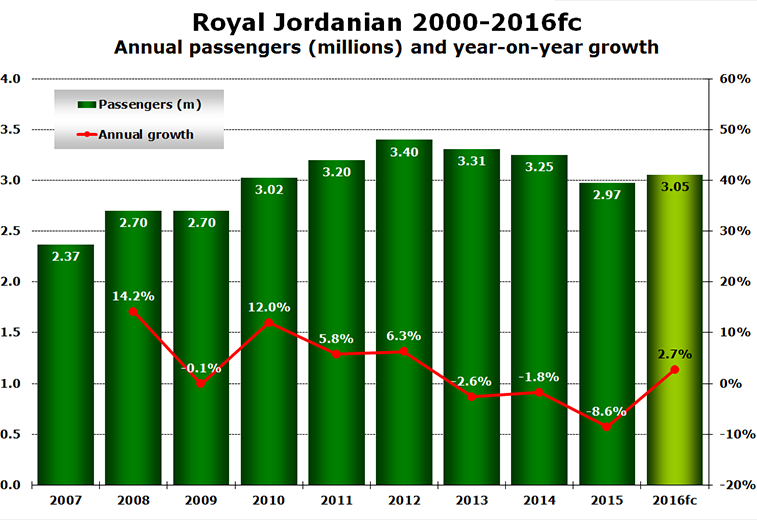 In the run-up towards 2013, the prospects for RJ seemed to be heading in one direction – upwards. Indeed looking at the airline’s network at that stage, it offered 56 non-stop destinations in January 2013, 10 more than it does in the same month just four years later. Since then, RJ’s passenger figures have slipped backwards year-after-year, sinking below three million in 2015 for the first time since 2009. However, if the airline manages to maintain its uninspiring 61% network-wide load factor that it achieved in 2015, its passenger figure for last year could well creep above three million again, based on OAG’s annual capacity figure of just over five million annual seats.

When comparing total seats in the week commencing 19 January 2017 with the same period a year ago, the airline’s capacity has fallen by 5.5%. Last January, RJ offered 49 non-stop destinations on its network; in 2017 this has fallen to 46. Added to the roll-call is Brussels, which is currently connected to Aqaba on a scheduled charter basis from 20 December until mid-April. Lost from the network are Jakarta (a route started 14 December 2015), Ankara (started 8 December 2015), Kiev Boryspil (ceased in March 2016 due to commercial reasons after eight years of service) and Tabuk (started 15 July 2015). Not included in this list is Guangzhou, which was started on 21 March last year, only to be removed from its network less than two weeks ago on 9 January. 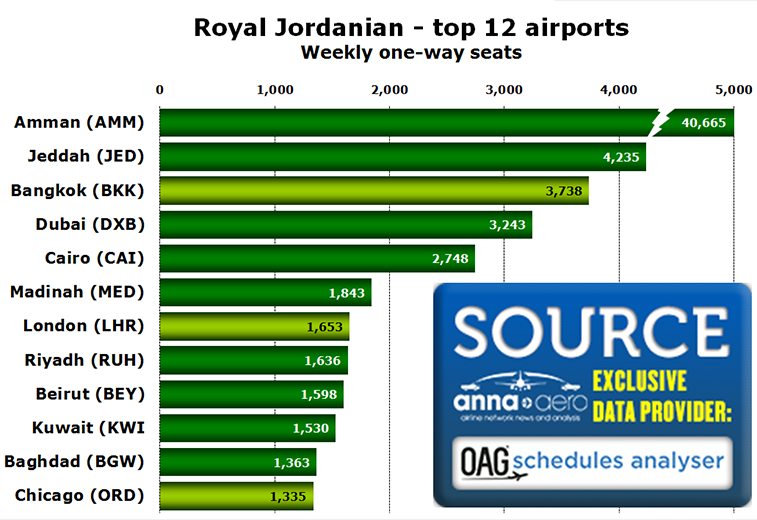 Looking at the airline’s top 12 airports, London Heathrow is a new entrant, having risen from 15th position to seventh, courtesy of a 24% increase in weekly seats when compared to the same week last year. Also new to the top 12 is Chicago O’Hare, its 12th spot secured (up from 14th) as a result of significant capacity cuts on sectors to Kuala Lumpur and Tel Aviv, both of which have fallen out of the top 12, and despite the fact its own capacity remained static at 1,335 weekly seats. RJ’s reliance on its regional network is evident, with just three of its top 12 airports (highlighted in light green) being outside of the Middle East. The fastest growing airport in the airline’s network over the past 12 months is Bangkok Suvarnabhumi (+27%), whereas by contrast airports including Riyadh (-18%) and Kuwait City (-7.5%) have witnessed substantial capacity culls.

Thailand and UK up; Israel and Kuwait cut

This year RJ is serving 30 country markets, adding Belgium, but seeing the Ukraine and Indonesia removed from its route map when comparing to this time last year. Inside the top 12, substantial capacity growth has seen the UK leap from 14th place to eighth, while a capacity reduction to Turkey has witnessed it being displaced from 11th a year ago to 13th this time around. While capacity to the US has stayed static over the past year, all of the remaining 11 country markets in the top 12 have encountered some tweaks to weekly seats. Leading the capacity hikes are Thailand (up 27%) and the UK (24%), while seats to Israel (-16%) and Kuwait (-7.5%) have experienced significant drops since last January. 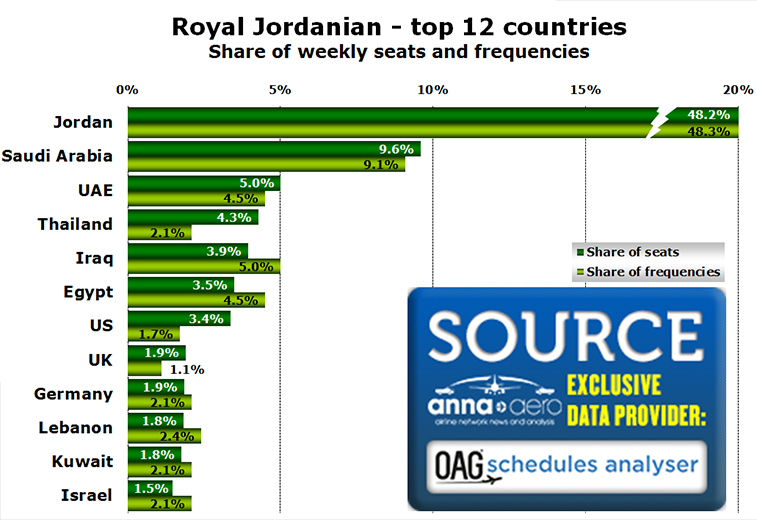 The graph above allows us to determine exactly where RJ’s weekly capacity and frequencies are primarily allocated. As with most carriers, RJ’s longer sectors (Thailand, US and UK) are flown with bigger aircraft and therefore take a bigger share of weekly seats, but are operated at a lower weekly frequency; whereas the country markets in the region (Iraq, Egypt, Lebanon, Kuwait and Israel) tend to be operated at a greater frequency, but as they are flown by smaller aircraft they generate a reduced share of capacity. Interestingly, there are two anomalies to this rule – Saudi Arabia and UAE. This is because, despite being regional markets, many of the flights operated to these two countries are flown by RJ’s biggest aircraft, its A321 and 787-8 fleets, giving them a disproportionate share of capacity.

No route development planned – no surprises there!

Given RJ’s recent success rate, it is perhaps not surprising to comprehend that the oneworld carrier is not exactly rushing to start any new routes in 2017. Indeed, according to anna.aero’s New Route Database, only the airline’s route to Najaf, launched in June 2015, is still in operation of the five new city pairs started since the beginning of 2015. Therefore anna.aero is not planning to hold its breath for the next route announcement… 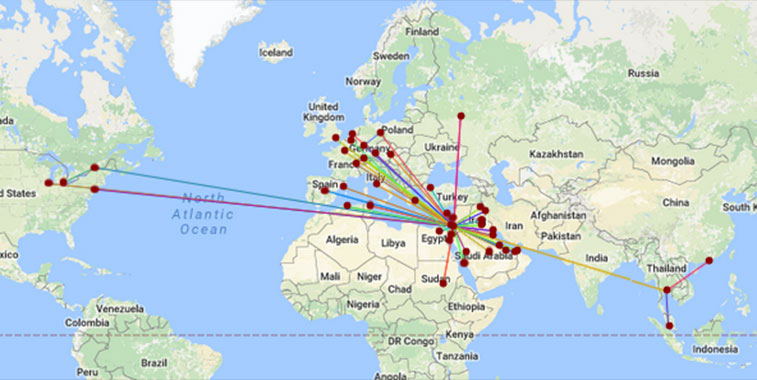 Missing off Royal Jordanian’s route map above are the country markets of Indonesia and the Ukraine – as routes to Jakarta and Kiev Boryspil have been terminated. A newcomer over the past 12 months is Belgium, as the oneworld carrier is flying a seasonal scheduled charter operation from Aqaba to Brussels between December 2016 and April 2017.