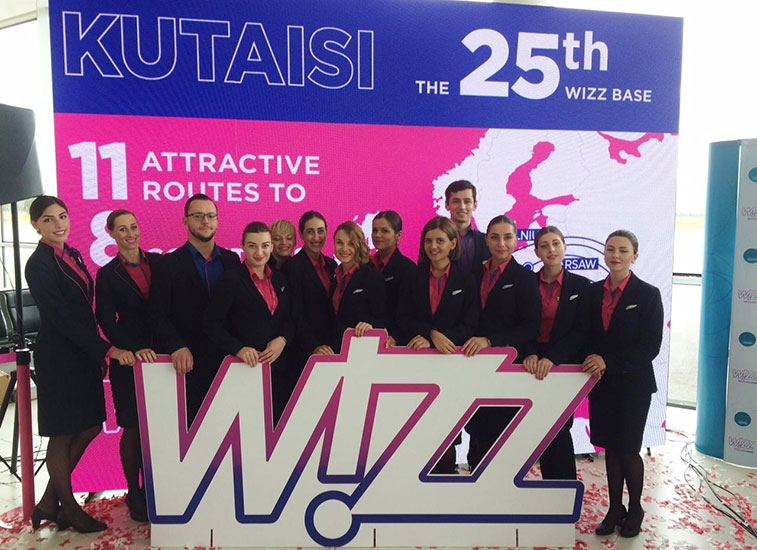 In September 2016 Wizz Air made Kutaisi its 25th base. This helped the airport to grow by 48% in 2016 and handle a total of 271,000 passengers last year. As a result, Wizz Air is now the fourth biggest airline in Georgia based on annual seat capacity. The ULCC will serve 11 destinations from Kutaisi this summer of which three are in Germany and two are in Poland.

With a population of under four million people, but covering an area the size of Ireland, Georgia has three international airports in Tbilisi, Kutaisi and Batumi. With a coast on the Black Sea and sharing borders with Russia, Azerbaijan, Armenia and Turkey, the independent state (since 1991) is surrounded by some interesting neighbours.

The country’s airports have seen rapid growth in recent years. In 2009, the three airports handled just 750,000 passengers in total. By 2016 that number had risen to 2.84 million, an increase of 280% in just seven years, the equivalent of average annual growth of 21%. Last year saw particularly impressive growth. Passenger numbers were up 22% in Tbilisi, 38% in Batumi and 48% in Kutaisi. The significant growth at Kutaisi can mostly be explained by Wizz Air making the airport its 25th base last September. The ULCC has been serving the airport since September 2012 when it began flights from Kiev Zhulyany. Tbilisi and Batumi are both operated by TAV Georgia, while Kutaisi is operated and owned by United Airports of Georgia, a state-owned company. 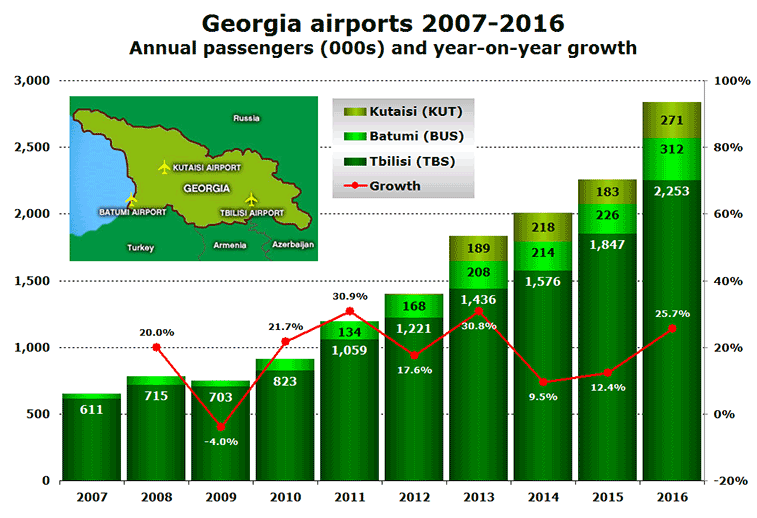 Tbilisi International Airport serves the country’s capital and is Georgia’s busiest airport. Having passed one million passengers in 2011, the airport passed the two million mark in November 2016, finishing the year with 2.25 million passengers. The airport’s busiest month is August and the airport scores a “poor” 11.52 on anna.aero’s Seasonal Variation In Demand (SVID) calculator based on 2016 data. Kutaisi also scores a “poor” 13.02, but Batumi, located on the coast and primarily a seasonal leisure destination records a score of 80.20 indicating “managerial and operational challenges”. 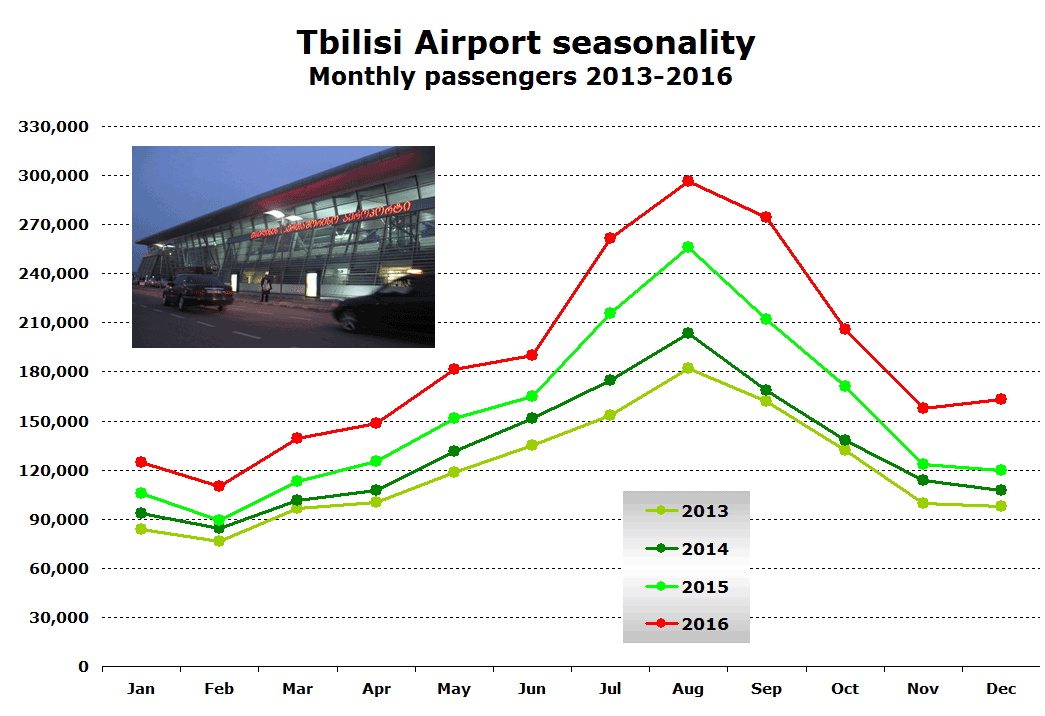 A look at OAG data for the last two years reveals that in terms of annual seat capacity the leading airline in the country is not the national carrier, Georgian Airways, but Turkish Airlines. The Star Alliance member currently serves both Batumi and Tbilisi from Istanbul Atatürk, as well as Tbilisi from Istanbul Sabiha Gökçen. The national carrier, also known as Airzena, was formed in 1993, but has been using the name Georgian Airways since 2004. The airline currently has two 737-700s and two CRJ 100s, and this winter is operating scheduled services from Tbilisi to Amsterdam, Moscow Vnukovo, St. Petersburg, Tehran, Tel Aviv, Vienna and Yerevan. 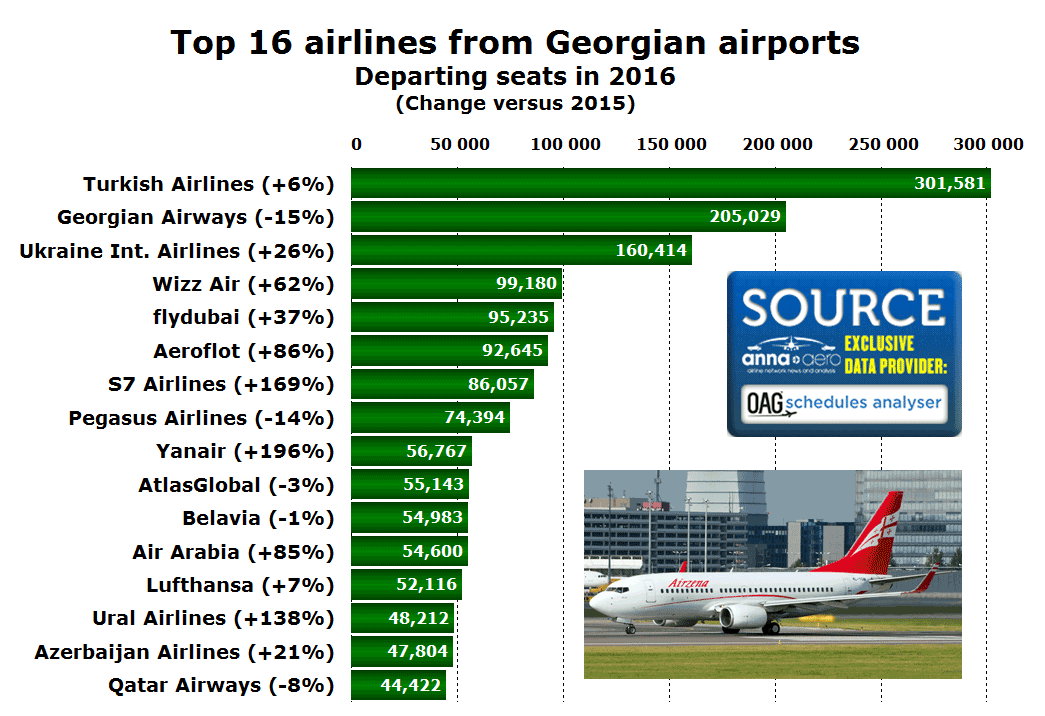 A total of 37 airlines operated at least one scheduled flight to and from Georgia in 2016. Six of the top 16 airlines saw capacity grow over 50%, with Yanair (+196%), S7 Airlines (+169%) and Ural Airlines (+138%) all more than doubling their capacity in Georgia. Wizz Air has overtaken flydubai to be the biggest (U)LCC in Georgia, with two more LCCs, Pegasus Airlines and Air Arabia, also ranking inside the top 12. 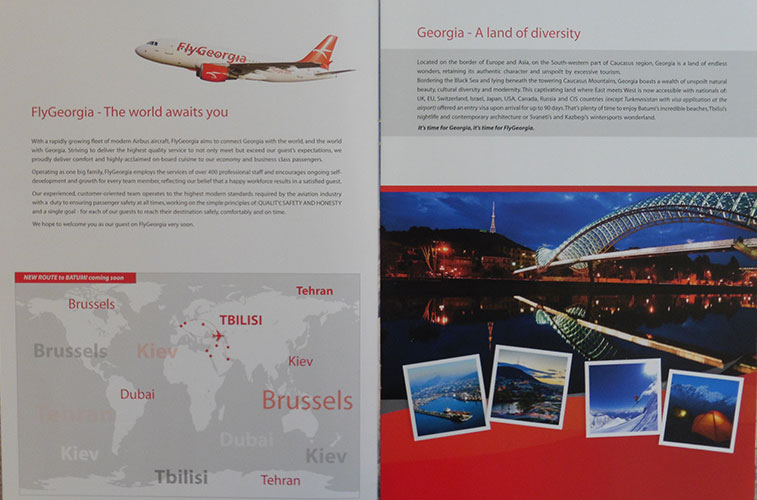 Between the second half of 2012 and September 2013 Georgia had another home-based carrier, FlyGeorgia. anna.aero’s Chief Analyst even has a nice glossy brochure produced by the airline to promote its route network which included Brussels, Dubai, Düsseldorf, Kiev and Tehran. The airline operated two A319s and a single A320.

Neighbours Turkey and Russia remain the two largest country markets for flights to and from Georgia. While Turkish capacity held steady in 2016, the volume of seats on flights to Russia increased by 21%. However, third and fourth ranked Ukraine and UAE grew even faster in percentage terms. Germany, Poland and Greece were the leading EU members among the top 15 country markets. Only one of the top 15, Egypt, showed a significant decline in capacity. In 2016 there were no regular scheduled services to anywhere in Georgia from any airports in Spain, the UK or any of the Nordic countries. 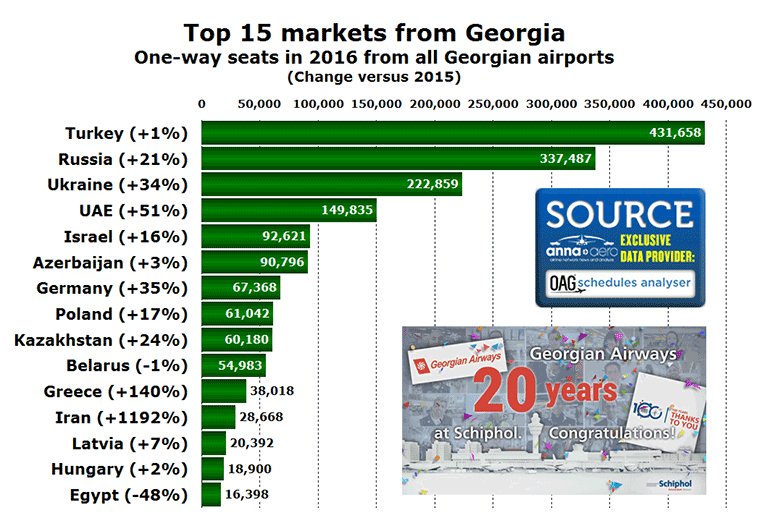 Despite the rapid growth in traffic in recent years, so far there are relatively few new routes planned across Georgia’s airports in 2017. Ellinair plans to begin seasonal flights to Tbilisi from Thessaloniki (twice-weekly from 15 May) and from Heraklion (weekly from 16 June), while Gulf Air will launch a three times weekly service from Bahrain in June. Finally, from 29 April, S7 Airlines will operate a weekly service to Tbilisi from Novosibirsk. 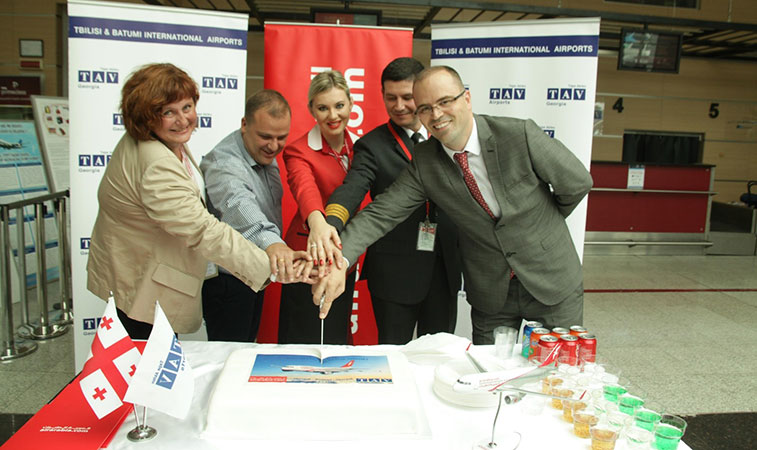 Air Arabia began service to from Sharjah to Batumi on 2 July 2016. The twice-weekly service complemented the LCC’s existing service to Tbilisi which began on 28 October 2014. Air Arabia is the 12th biggest carrier in the Georgian market and the UAE is the third busiest country market, with capacity up 34% in 2016.