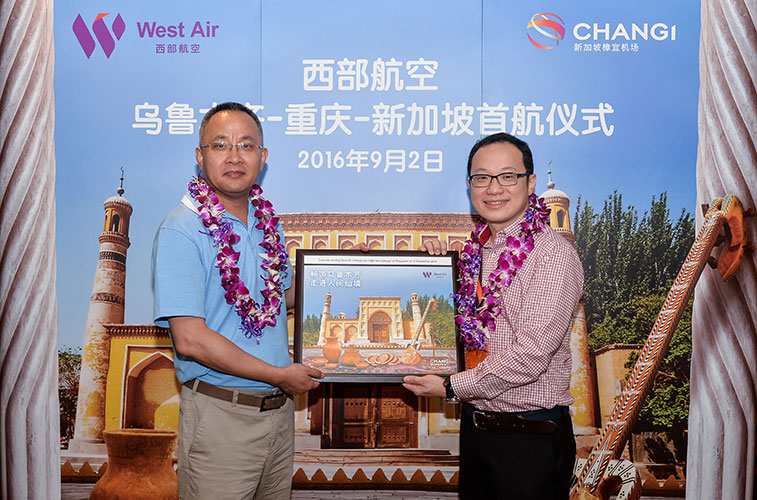 Last September West Air began serving Singapore four times weekly from Urumqi though with a stop in Chongqing. West Air is one of the smaller airlines serving Urumqi and currently operates just three flights per day from the airport.

Urumqi Diwopu International Airport in China’s north-west has become the latest to pass the symbolic 20 million passenger milestone, just before the end of last year. According to the airport’s website the landmark was achieved on 28 December. Back in 2002 the airport handled fewer than two million passengers per annum. In the 14 years since, traffic has grown by more than 10% in 11 of them and between 5% and 10% in two more years (2014 and 2016). Only in 2008 did Urumqi see a fall in passenger numbers. The airport is targeting close to 30 million passengers by 2020. It serves Urumqi, the capital of the Xinjiang Uyghur Autonomous Region of China, which has an urban population of over three million people. 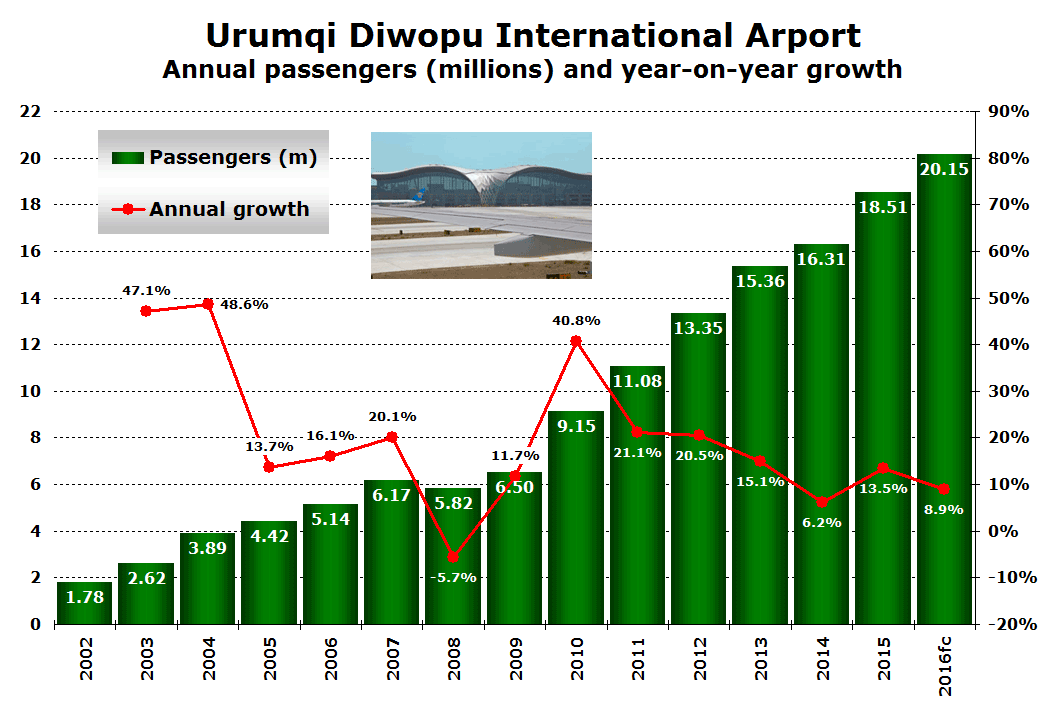 According to OAG data, only 5% of seat capacity at Urumqi in 2016 was on international services. A closer look at the top international routes for number of flights last year reveals that Almaty in Kazakhstan is the clear winner, served twice-daily, with Air Astana and China Southern Airlines both operating a daily service. Kazakhstan almost grabs the top two spots, but the country’s capital, Astana, is narrowly beaten by Bishkek, the capital of Kyrgyzstan. Two more ‘stans’ make the top 10, with Dushanbe (the capital of Tajikistan) ranking fourth and Tashkent (the capital of Uzbekistan) in ninth. 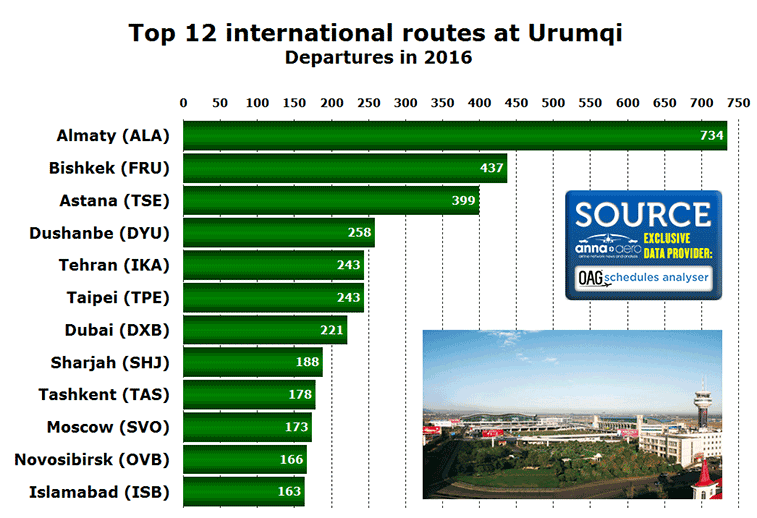 With 43% of seat capacity in 2016 SkyTeam member China Southern offers more than three times as many flights as the next biggest carrier in Urumqi, Tianjin Airlines. With over 100 departures each day China Southern serves over 50 destinations including 18 outside of China. All of the top 12 airlines are local, with Air Astana the first foreign carrier ranked in 16th place with 12 weekly departures. Just 32 (1.8%) of the airport’s 1,776 weekly departures last August were flown by non-Chinese carriers 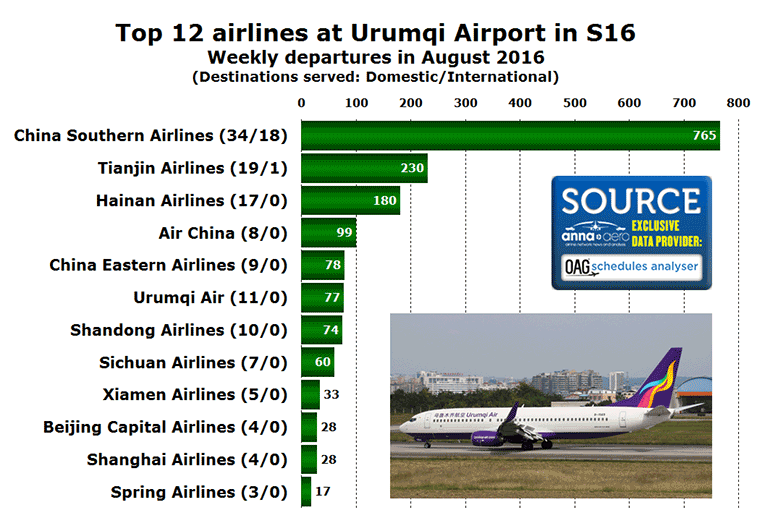 Local carrier Urumqi Air, launched in 2014, is one of many Chinese carriers with links to Hainan Airlines. Operating a fleet of nine 186-seat 737-800s, the carrier currently serves 12 domestic destinations. The most recent route addition was to Yinchuan, which was launched with a daily service on 30 October competing against four other carriers. Urumqi Air replaced Hainan Airlines on the route, which had itself only launched the route back in February 2016. It is worth noting that Urumqi Air is one of the founding members of the U-FLY Alliance.

Not surprisingly, the top 12 routes from Urumqi last summer were all domestic destinations. What is maybe surprising is how many carriers are serving each route, with 10 of the top 12 routes served by at least five different airlines. No single route dominates with nine routes all having been 10 and 20 daily departures. The best served route is to Kashi where eight airlines operate at least daily flights on the 1,064-kilometre route. Kashi is another city in the Xinjiang region, and even further west than Urumqi. 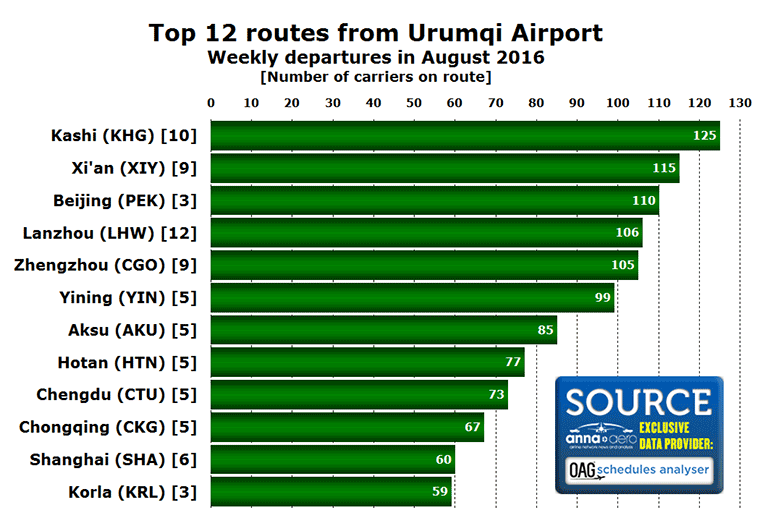 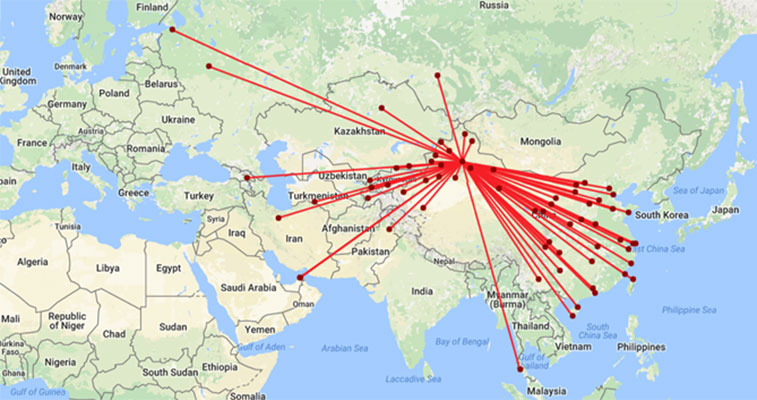 Urumqi’s route network is still heavily focused on domestic routes which make up 95% of the airport’s weekly seat capacity. The majority of international flights are to the nearby ‘stans’, with Almaty in Kazakhstan served daily by both Air Astana and China Southern Airlines.