Manchester to Bangkok is the #1 unserved route between Europe and Thailand; Russia and UK top markets; MEB3 presence intensifying 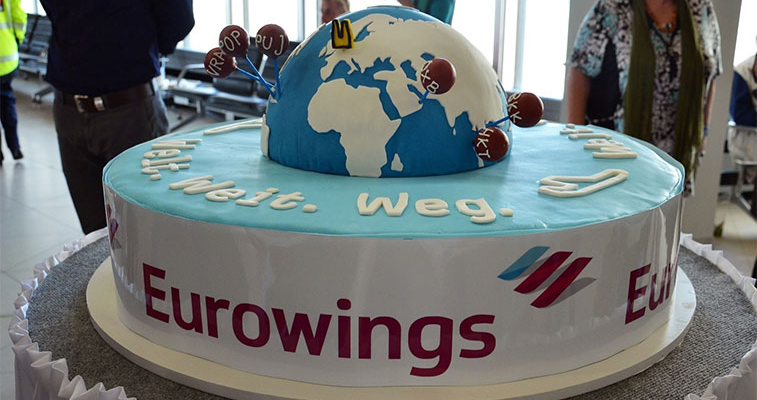 At the start of last year, Eurowings celebrated the inauguration of low-cost long-haul operations from Cologne Bonn to multiple destinations, including Bangkok and Phuket, with this fantastic cake. The airline is currently the 14th largest in the market between Europe and Thailand, with it occupying 1.8% of annual seats.

Thailand has been a booming nation in recent years when it comes to tourism growth. According to a study by the Oxford Business Group, after regional visitors from Asia the next-largest contingent travelling to Thailand is from Europe, with 5.63 million making the journey in 2015. This figure represents nearly 19% of all incoming visitors to the nation that year.

Russians most popular tourists from Europe

Statistics released by Thailand’s Department of Tourism reveals that Russia was the #1 European visitor market to Thailand in 2016, with just under 1.09 million visitors. However Russian visitors to Thailand peaked at a little under 1.75 million in 2013. The reason for the downfall in 2014 and 2015 was due to the the crash of the ruble (depreciating 46% against the US dollar in 2014). As a result, Russian arrivals to Thailand almost halved, with only 0.88 million visits in 2015. Nonetheless, Russian tourism grew by 23% during the past 12 months to peak above one million once again. The graph below highlights the European markets that are included in the top 25 international visitor nations to Thailand in 2016 according to the country’s Department of Tourism, plus how they have developed during the past decade. 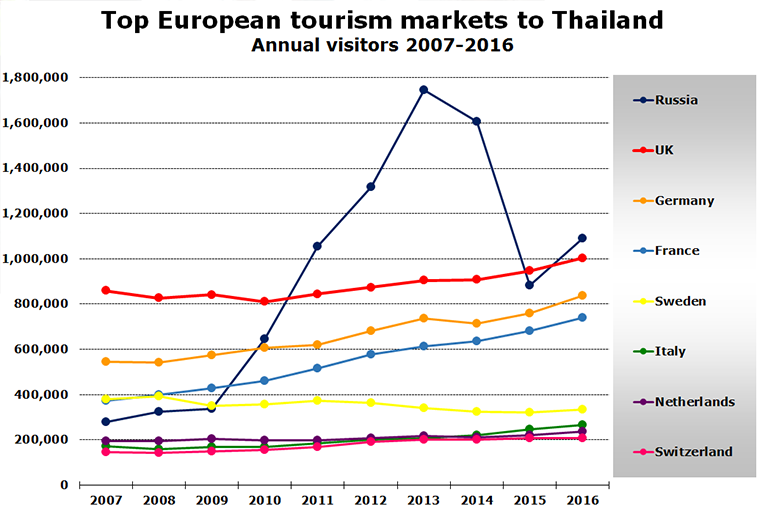 The leading carrier in the market between Europe and Thailand is Thai Airways. Last year the airline occupied over 43% of seats in the market, however its share has dropped by more than eight points from the 52% share it had in 2007. With the Russian market booming during the past decade, it comes as no surprise to see that Aeroflot has risen to become the second largest airline in the market. In 2007, the carrier was 16th and had 2.2% of annual seats, while today it has 8.5%. Until its demise in 2015, Russian carrier Transaero Airlines was also influential in the market. In 2012 it occupied 9.3% of seats, having grown from a 3.3% share in 2007. Despite closing in October 2015, the airline still flew 4.7% of seats between Europe and Thailand two years ago. 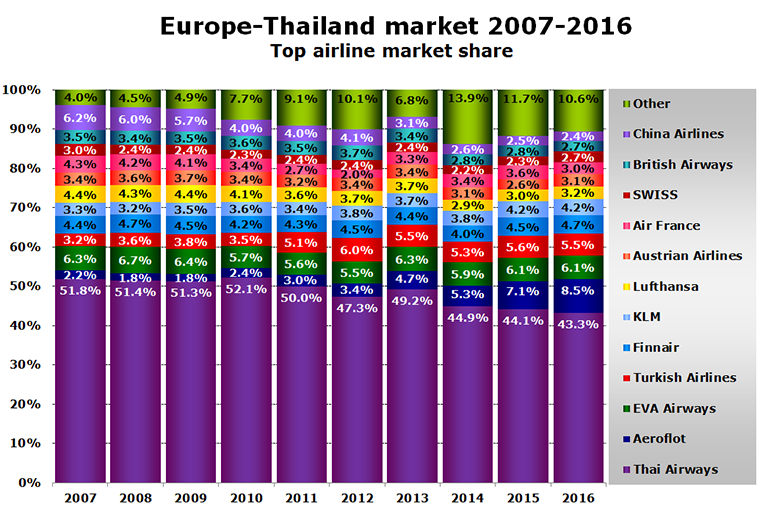 One European airline which is noticeably absent from the market is SAS. Until March 2014 the Star Alliance member operated a five times weekly link between Copenhagen and Bangkok Suvarnabhumi. The airline until 2009 also connected Stockholm Arlanda to the Thai capital. In its last full year of operations (2013), SAS flew 0.9% of seats in the market, however it peaked in 2008 when it had a 3.1% share. Although multiple factors will have contributed to the loss of SAS (MEB3 carrier growth and Swedish tourism market fall), one key impact is the arrival of LCC Norwegian.

On 1 June 2013 Norwegian commenced flights to Suvarnabhumi from Oslo Gardermeon, while services from Arlanda followed a few weeks later. That year the airline occupied 1.5% of seats between Europe and Thailand. Although Norwegian last year controlled 2.3% of annual seats, its own capacity fell by nearly 14%. Joining the low-cost long-haul party to Thailand in late-2015 was Eurowings, with it controlling 1.8% of seats on its routes from Cologne Bonn to Suvarnabhumi and Phuket last year.

All top 12 routes between Europe and Thailand arrive into Suvarnabhumi Airport. The leading European airport in terms of connections to the Thai capital is London Heathrow, with the airport pairing occupying around 12% of seats in the market. This winter there are 244 weekly flights between Europe and Thailand, up one from the same week last year. Since 2007, the total of weekly flights on offer has risen by 9.9%. 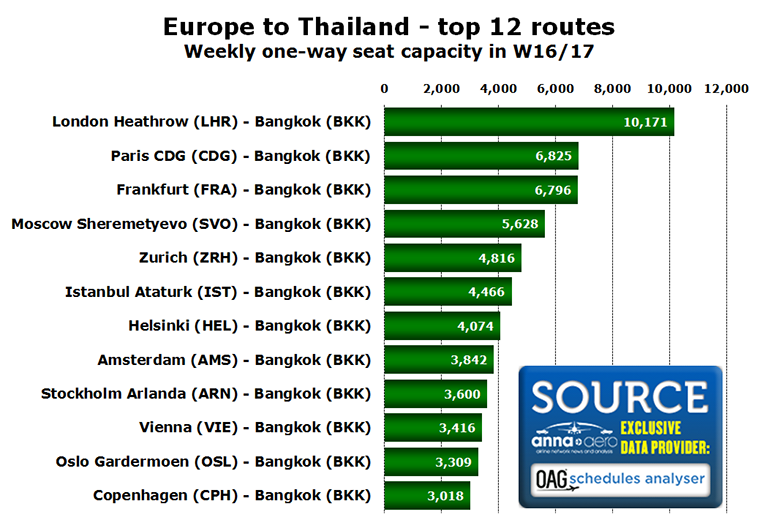 Just missing out on a top 12 place is the first route to Thailand that does not land in Bangkok, with the airport pairing of Moscow Sheremetyevo and Phuket placing in 13th (3.2% of weekly capacity between Europe and Thailand). Phuket is connected to 11 European airports non-stop this winter, namely Sheremetyevo, Moscow Vnukovo, Stockholm Arlanda, Copenhagen, Helsinki, Frankfurt, Zurich, Cologne Bonn, Gothenburg, Manchester and London Gatwick. The only other airport in Thailand that sees direct flights from Europe is Krabi, a destination connected to the four Scandinavia cities of Helsinki, Arlanda, Copenhagen and Gothenburg.

An estimated 135,000 passengers travelled between Manchester and Suvarnabhumi airports in 2016, making it the #1 unserved route between Europe and Thailand. This means that the unserved airport pairing welcomed 184 PPDEWs (Passengers Per Day Each Way) last year. When referring to OAG Traffic Analyser data, just under 54% of traffic on the city pair originated from Manchester. The most popular connection points for passengers in 2016 included Dubai (29% of traffic), Doha (27%) and Abu Dhabi (22%). The leading connection point in Europe from Manchester was Amsterdam, with 4.9% of passengers choosing to connect via the Netherlands hub. Looking back at traffic data for 2012, just over 100,000 people travelled between Manchester and Bangkok, meaning demand on the city pair has grown by nearly 31% during the past four years. 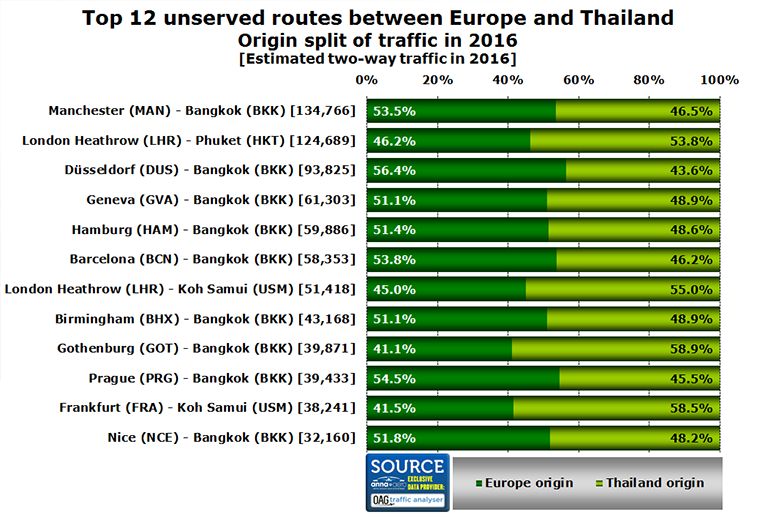 Looking at the influence of the MEB3 (Emirates, Etihad Airways and Qatar Airways) on connecting passengers between Europe and Thailand, traffic data reveals the strong impact these airlines have had in the market. Last year, Emirates carried an estimated 847,000 passengers via its Dubai hub between the two markets, up from 301,000 in 2012. This represents a growth figure for the carrier of 181%. Etihad in the same time has seen its traffic between Europe and Thailand grow 54% via its Abu Dhabi base, while Qatar Airways’ has risen 158% via Doha. 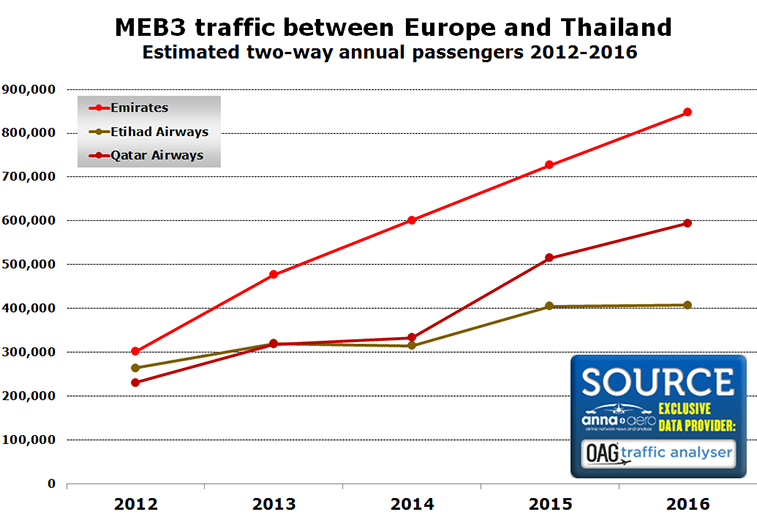 As a collective, the MEB3 last year carried an estimated 1.85 million passengers between Europe and Thailand, up from the 795,000 the three flew in 2012. Emirates’ average year-on-year increase in traffic is 36%, Etihad’s is 11%, while Qatar Airways is posting an average of 32%. Emirates serves both Bangkok and Phuket, along with Etihad and Qatar Airways. The latter also offers flights between its Doha hub and Krabi. In total, the three carriers offer 143 weekly flights to Thailand from their retrospective hubs, increasing from a total of 47 weekly flights 10 years ago.

Although it has not been officially confirmed, flights with Thomson Airways are now bookable between Birmingham and Phuket. The new route will become the UK airport’s longest sector, while for Thomson it will be its third link to Phuket from the UK, joining its existing Manchester and Gatwick operations. Looking at the airline’s booking engine, the route will be flown on its 787-8s on a fortnightly basis starting 8 November. From 17 July, Turkish Airlines will begin flights to Phuket from Istanbul Atatürk, increasing connection options to numerous airports in Europe. The Star Alliance member is currently planning to operate the sector four times weekly on its A330-300s, with the route complementing its twice-daily service from Atatürk to Suvarnabhumi.

It is understood that Thai AirAsia X is planning to commence flights to Europe in S17. It had previously been reported that its sister carrier, AirAsia X, was going to start a triangular routing of Kuala Lumpur – Istanbul Atatürk – Barcelona, launching 30 October, however this service never materialised. According to various sources, Thai AirAsia X is looking into flights to Budapest, Prague and Warsaw Chopin. Tassapon Bijleveld, CEO of Thai AirAsia, has stated that the airline is drawing up plans for a possible long-haul debut to Europe as early as 2017. The airline recently ended its services to the Middle East, with low load factors being a reason for the withdrawal of flights to Tehran and Muscat. These were the airline’s longest routes from its Bangkok Don Mueang base, however this title now goes to its Tokyo Narita connection. With the market between Europe and Thailand growing fast, and the influence of MEB3 carriers increasing, it could be a good time for Thai AirAsia X to enter the market with attractive fares to rival those of the Middle Eastern airlines. 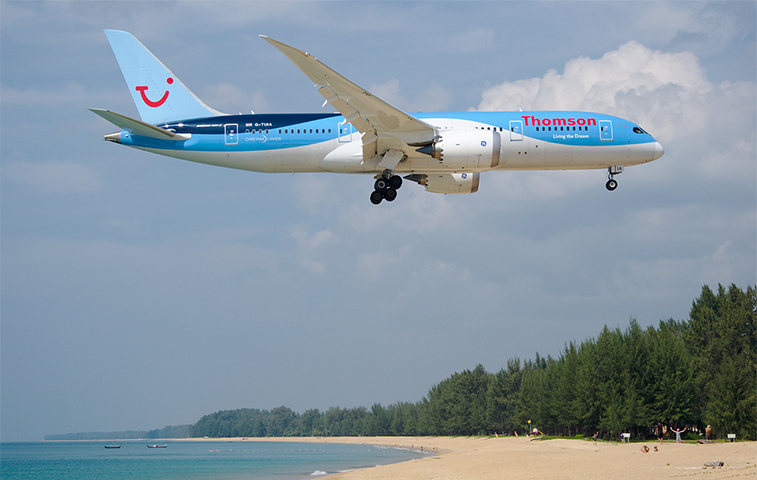 Although flights have not been confirmed by the airline, on Thomson Airways’ booking engine it shows that the UK leisure carrier will commence a direct flight to Phuket from Birmingham on 8 November. Shown to be operated on its 787-8s according to the dummy booking conducted by anna.aero, the airline already operates the aircraft into Phuket on its routes from Manchester and London Gatwick.