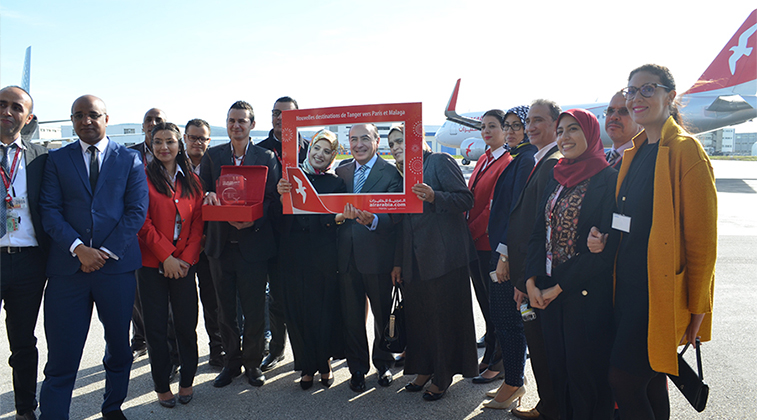 On 4 December Air Arabia Maroc launched flights to Paris CDG and Malaga from Tangier in Morocco, with a celebration for the new routes taking place at the latter airport. Paris CDG and Malaga are both new airports to join the airline’s route map during the past year, while Tangier has seen seat capacity with the carrier grow by 28%.

Launching in 2009, Air Arabia Maroc has grown to become Morocco’s third largest airline, with the LCC occupying 6.7% of monthly seat capacity this winter. It sits behind Royal Air Maroc (49% of monthly seat capacity) and Ryanair (13%), but ahead of Jetairfly (4.6%) and easyJet (3.3%). Air Arabia Maroc’s share of the Moroccan market has increased on the 5.8% share it had last winter. While Royal Air Maroc’s share has also risen from 48%, it should be noted that Ryanair’s has dropped by 0.8%. Air Arabia Maroc currently operates a fleet of five A320s according to ch-aviation. When referring to OAG schedules this winter, it appears that the airline has two aircraft stationed in Casablanca, while Fez, Nador and Tangier each have one.

During the past 12 months, Air Arabia Maroc’s seat capacity has risen by over 18%, passing 1.4 million annual one-way seats for the first time. During the eight years it has been operating, the airline has registered two years when its capacity dropped, with seat availability down 24% in 2012 and 11% in 2014. 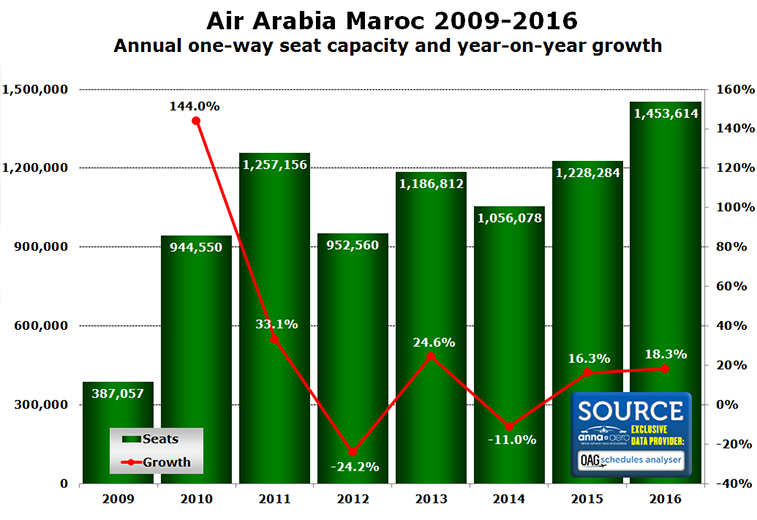 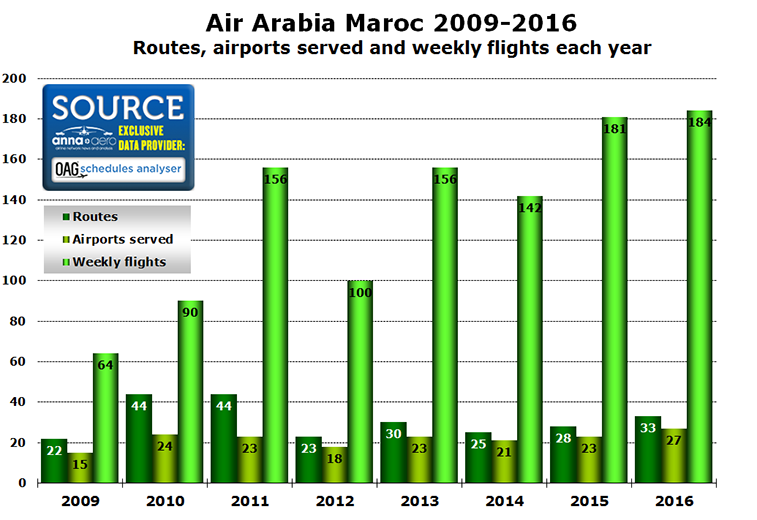 The fluctuations in weekly flights between 2011 and 2014 match the capacity patterns of the airline. This in turn has also effected the amount of airports flown to, and the total number of routes that Air Arabia Maroc has been able to operate during its relatively short lifetime. Last year was the peak for Air Arabia Maroc when it comes to the diversity of airports it serves, however its route count in 2016 is still 11 less than it was in 2010 and 2011.

All five Moroccan airports which Air Arabia Maroc operates from all appear in the airline’s top 12 (highlighted in light green). The leading airport is Casablanca, with the largest city in Morocco occupying 20% of the airline’s departing seat capacity this winter. Tangier is second with 13%, while Nador (9.0%), Fez (5.8%) and Marrakech (2.7%) all occupy single-digit shares. The leading international airport this winter is Montpellier, with the southern French airport having 6.7% of seat capacity. 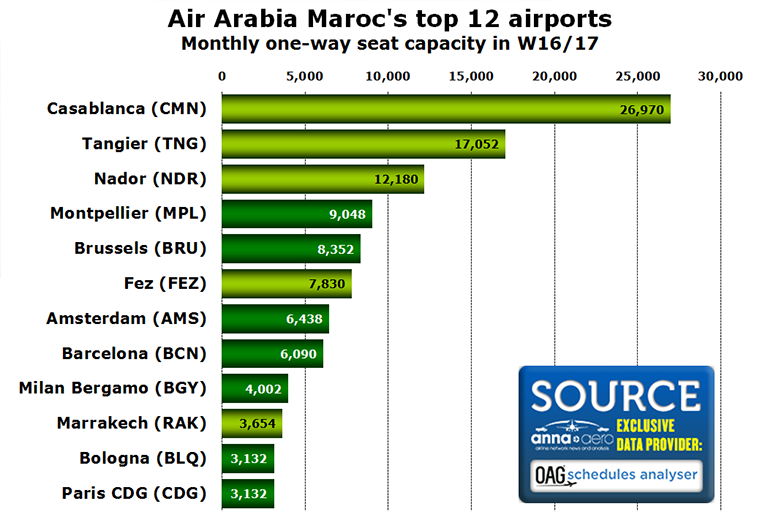 During the past 12 months, Air Arabia Maroc’s Casablanca seat capacity has risen 11%, cementing it as the airline’s biggest base. Tangier has witnessed the amount of seats it occupies rise by 28%, while Nador’s has grown 21%. Although Montpellier is the leading international airport this winter, during the past year it has taken the title away from Brussels. Although the Belgian capital city airport has seen its capacity with Air Arabia Maroc grow 17%, Montpellier’s has increased by 27%. When referring to OAG schedules, it appears that Air Arabia Maroc has launched flights to four new airports during the past 12 months: Paris CDG; Malaga; Bordeaux and Pau. Paris CDG, which jumps straight into the top 12 in 12th place, welcomed the arrival of Air Arabia Maroc on 4 December with connections from Fez and Tangier. Malaga received a link from Tangier on the same day. Flights to Bordeaux launched on 3 December from Fez, while Pau experienced the arrival of Air Arabia Maroc on 1 April with a weekly flight from Marrakech. No airports have been dropped from the airline’s network during the past year.

France reigns as the leading country market from Morocco

Air Arabia Maroc currently does not offer any domestic flights in Morocco. The leading country market is France, with it occupying 30% of the airline’s monthly departing seat capacity. Although it is the airline’s leading country pair, overall Air Arabia Maroc is the sixth largest carrier between Morocco and France, a market which is served by a total of seven airlines. The leading airline is Royal Air Maroc followed by Ryanair, with the two leading carriers in Morocco occupying 40% and 16% of seats in French market respectively. They are followed by Air France (12%), Jetairfly (11%) and Transavia France (10%). Air Arabia Maroc has a market share of 8.2%, while the seventh largest carrier, easyJet, has 3.9%. Of the nine international markets which Air Arabia Maroc operates on, two have seen cuts in capacity during the past 12 months (highlighted in light red), with Turkey and UK both posting lower seat figures. 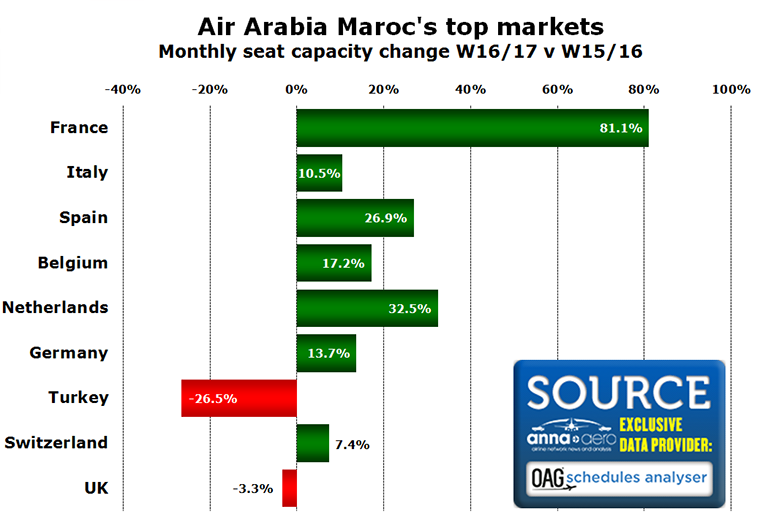 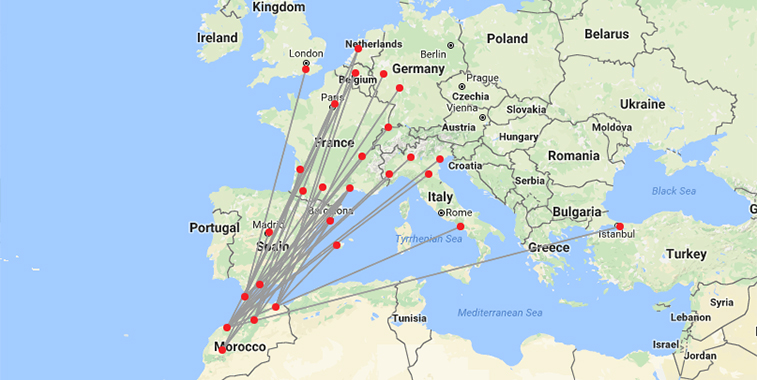 Air Arabia Maroc this winter serves 27 airports across Europe and North Africa, with its leading airport being Casablanca which occupies 20% of the airline’s departing seat capacity in W16/17. During the past 12 months Paris CDG, Bordeaux, Pau and Malaga have joined the carrier’s route map.