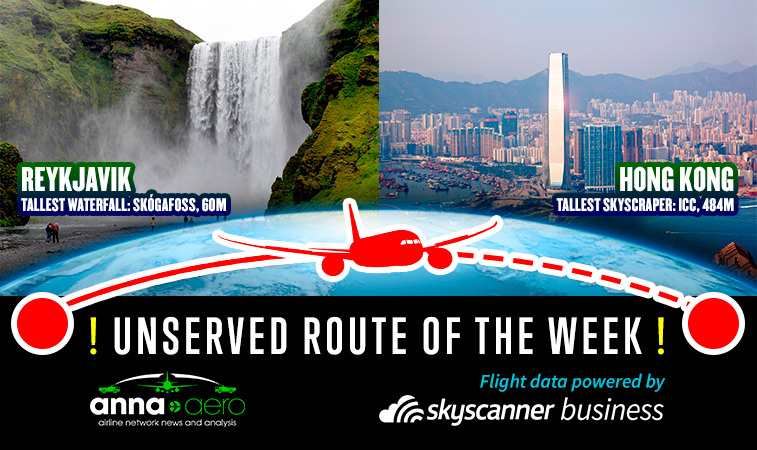 230,000 travellers vainly searched Skyscanner for a Reykjavik-Hong Kong service last year as Iceland continues its incredible tourist boom, with growth rates outpacing anywhere else in Europe. A four or five times weekly service should be immediately viable for the airline starting this potential city pair.

With nearly 230,000 searches in the last 12 months, a potential new route from Reykjavik to Hong Kong has been identified as this week’s “Skyscanner for Business-anna.aero Unserved Route of Week” – a powerful analysis based on aspirational data captured from the Skyscanner.net flight comparison site used by +60 million unique visitors per month. Investigation of this city pair between Iceland and Asia comes at an interesting time, as Reykjavik has just been announced by Skyscanner as the top emerging destination for Asian travellers in 2017. The Icelandic capital beat off other destinations like Hua Hin (Thailand) and Paro (Bhutan), after searches for Reykjavik increased by 81% on average over the past three years. 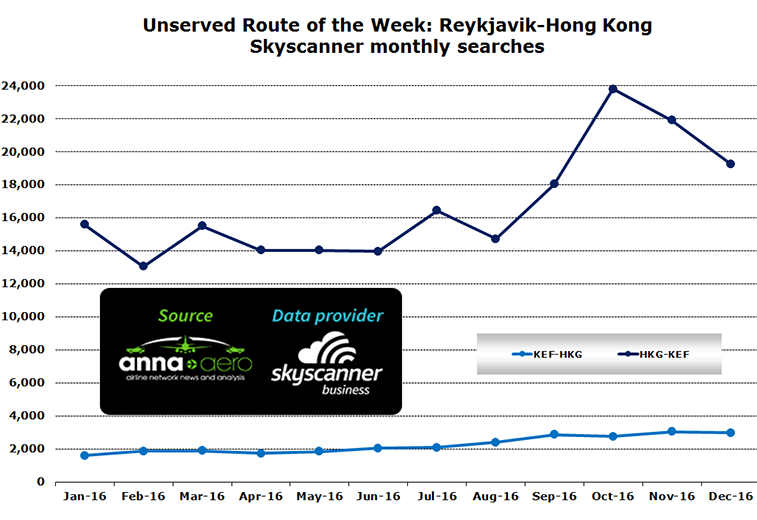 Skyscanner demand on this week’s unserved route shows a significant bias in favour of the Asian end of the city pair, an 88/12 split, so the potential carriers in Hong Kong were therefore considered first. The airport is unsurprisingly dominated by Cathay Pacific Airways, controlling 32% of weekly seats, according to OAG data for the week commencing 22 January. At the moment, the flag carrier operates to 53 global destinations from Hong Kong, including 11 in Europe – namely to the UK (London Heathrow, London Gatwick and Manchester), Germany (Frankfurt and Düsseldorf), Italy (Milan Malpensa and Rome Fiumicino), Spain (Madrid), Switzerland (Zurich), France (Paris CDG) and the Netherlands (Amsterdam). While Cathay Pacific’s European total becomes 12 airports in July when Barcelona is added to the oneworld carrier’s route map, the airline currently serves no Nordic destinations. With bigger airports in the region like Copenhagen (totally unserved to Hong Kong!), Helsinki (Finnair flies daily), Oslo Gardermoen (unserved!) and Stockholm (SAS flies five weekly services) all unserved by Cathay Pacific, Reykjavik is probably in a battle with these hubs to become the first airport in the region to have a link to Hong Kong flown by the airline.

The second-largest carrier at Hong Kong is another based airline, Cathay Dragon (formerly Dragonair), with a 15% share of weekly capacity. Despite having a broad network of 44 destinations from the city, none of them are outside of Asia. Looking ahead to the Cathay Pacific subsidiary’s route launches from Hong Kong later this year, this situation is seemingly not going to change in 2017 – as it plans to start flights to Kuala Lumpur (1 March; replacing the parent carrier). On this basis, a link to Reykjavik is well off the radar for Cathay Dragon at the moment.

Considering the Icelandic end of the route, the potential carriers at Reykjavik were contemplated next. Icelandair is the largest airline with 47% of weekly seats, ahead of its nearest rival WOW air with 30%. Of Icelandair’s 26 routes from the capital, none are to Asia, and instead its network is focused on connecting 15 destinations in Europe to 11 points in Canada and the US. Arch rival WOW air has adopted a similar model, but using an LCC approach to link its seven destinations in North America to the 13 operated to in Europe. So for either airline to start a Hong Kong route it will need a strategic shift in their respective existing network planning strategies  – although these Skyscanner figures should be very thought-provoking!

“We have seen a huge increase of Asian tourists travelling to Iceland in the past few years,” says Hlynur Sigurdsson, Reykjavik/Keflavik Airport’s Commercial Director. “According to immigration data, tourists from China and Japan account for 5% of the total tourists that visited Iceland in 2016. Those two nationalities grew by 39% between 2015 and 2016, and by 63% between 2014 and 2015.”

When looking at the previous year of search data, the busiest month for potential traffic flows (for both directions on the route combined) is October 2016, with nearly 27,000 searches, almost 12,000 higher than the lowest monthly figure, which was recorded in February 2016 (15,000 searches). The seasonality profile of this search data is slightly more extreme than the last Unserved Route of the Week (Nuremberg to Warsaw) with the low-month traffic representing 56% of the highest month. According to OAG Traffic Analyser, because there is no direct service, the top three connecting options chosen by those passengers who did book travel between Reykjavik and Hong Kong in the past year indicates that the majority of connecting travellers use Helsinki (26%) Frankfurt (22%) and Stockholm Arlanda (18%). Passengers looking to fly between the two cities in the opposite direction – Hong Kong to Reykjavik – used the same two top hubs, but the third most popular for Asia-originating traffic was London Heathrow.

“The main connecting points [from Reykjavik] to Asia are via Copenhagen, Helsinki, Frankfurt and London Heathrow,” confirms Sigurdsson. “In April 2017, Finnair will launch it‘s service to Keflavik. With Finnair‘s great network to Asia we expect a significant increase of Asian visitors, as well as better connections for Icelandic travellers to Asia.“

Indeed, an O&D that is not served by a non-stop flight will typically display a low purchase rate and low traffic. In this instance Skyscanner’s Travel Insight indicates a monthly average of 3.8% for the Reykjavik to Hong Kong route (see graph below). Therefore, if there was a Reykjavik to Hong Kong route, and if bookings performed in line with the “Skyscanner market average” for direct services at both airports (4.1%), the airline operating this route could immediately expect an improved purchase rate of 6.8%, without any increased marketing spend. However, with 230,000 annual searches a four or five times weekly service should be immediately viable for the airline selecting to start this potential city pair.

“What surprises many is the distance from Hong Kong to Iceland, but if you compare the sector length between Hong Kong and Copenhagen to the potential route from Hong Kong to Kelfavik, there is only 660 miles difference – about an extra hour in flight time. With that in mind and the demand, we see a great opportunity for a direct flight from the larger destinations in Asia to Iceland: Hong Kong; Tokyo; Beijing; Seoul; and Shanghai,“ concludes Sigurdsson. 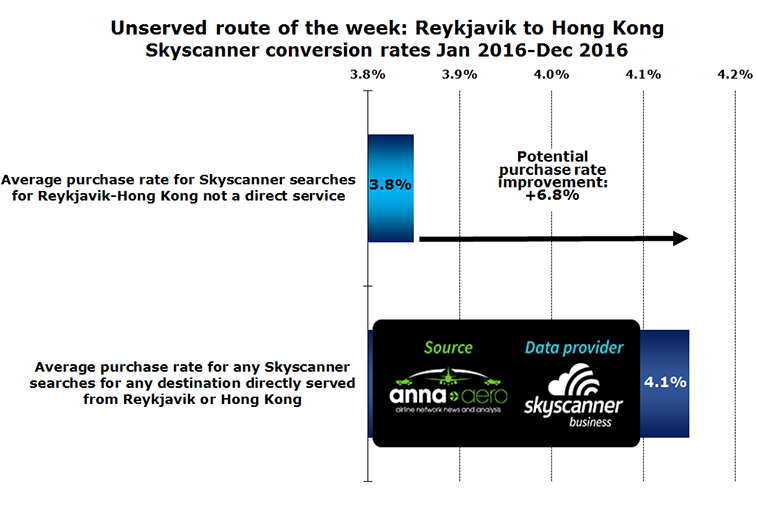