Milan Linate still handling close to 10 million annual passengers; Alitalia has 55% of seats and monopoly on busiest route to Rome 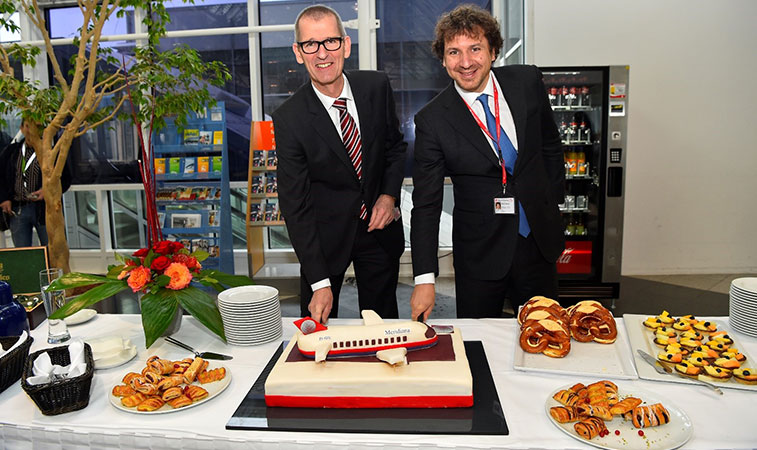 Meridiana is the second biggest carrier at Milan Linate (after Alitalia, who else) with just under 9% of seat capacity in 2016. On 30 November 2015 it launched a new year-round service to Munich (celebrated at the Bavarian airport in impressive culinary style), a destination that neither Alitalia nor Lufthansa operate from the Italian airport.

Of the three airports serving the Italian city of Milan, Linate Airport is the closest to downtown, just eight kilometres to the east of the city centre. For many years the busiest airport in the Milan region, passenger numbers peaked in 1997 at 14.3 million, the year before the new terminal opened at Milan Malpensa Airport, and rules were brought in to limit the ability of airlines to serve Linate. Since then there has been some relaxing of the restrictions and traffic picked up from just six million passengers in 2000 to between nine and 10 million for most of the last decade. 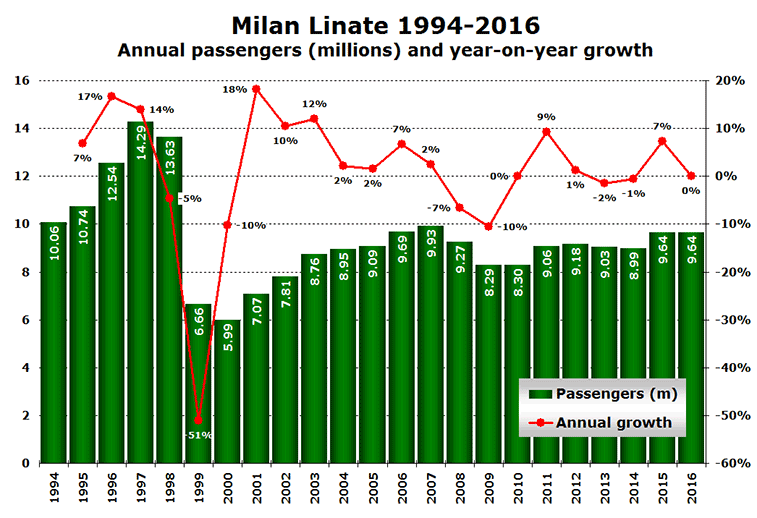 Linate has minimal seasonality compared to many airports in Europe thanks to its focus on business traffic and serving major cities rather than leisure destinations. According to anna.aero’s Seasonal Variation in Demand (SVID) calculator, Linate scored an “excellent” 1.25 in 2016 and an “excellent” 1.39 in 2014. In 2015 it achieved a slightly worse rating of 2.16 (only “good”). This appears to be down to a late surge, in September and October, of visitors to the EXPO, which took place in Milan between 1 May and 31 October. 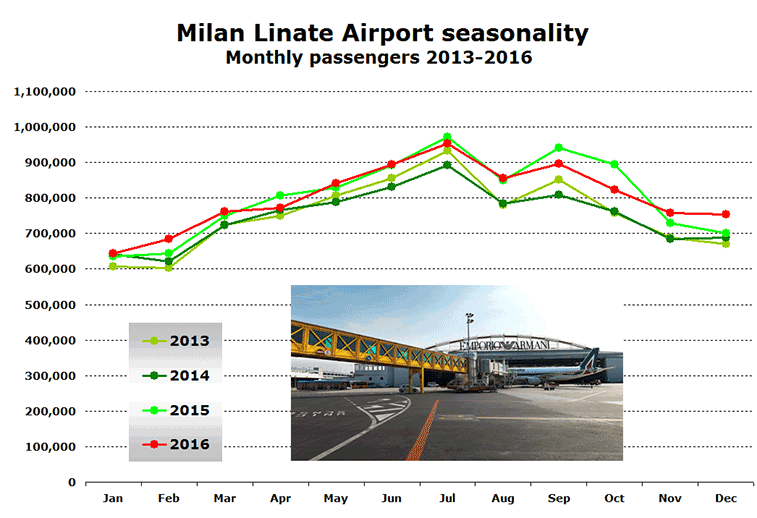 Despite the perception that Alitalia is completely dominant at the airport, analysis of OAG schedule data shows that Alitalia’s share of seat capacity in 2016 was just over 55%. The Italian flag-carrier operated flights to 36 destinations, though some of these were at very low frequency, for just a relatively short period, during the peak summer months. The second biggest carrier at Linate is Meridiana, with less than 9% of the market, making Alitalia more than six times bigger than its nearest competitor. The leading non-Italian carriers are both British; easyJet claimed almost 6% of annual seats last year (serving Amsterdam, London Gatwick, Paris CDG and Paris Orly), while British Airways accounted for almost 5% with its single route to London Heathrow. Given that one of the airport’s rules is that only destinations in the EU can be served it will be interesting to see what happens (and when) to these UK routes in light of Brexit. 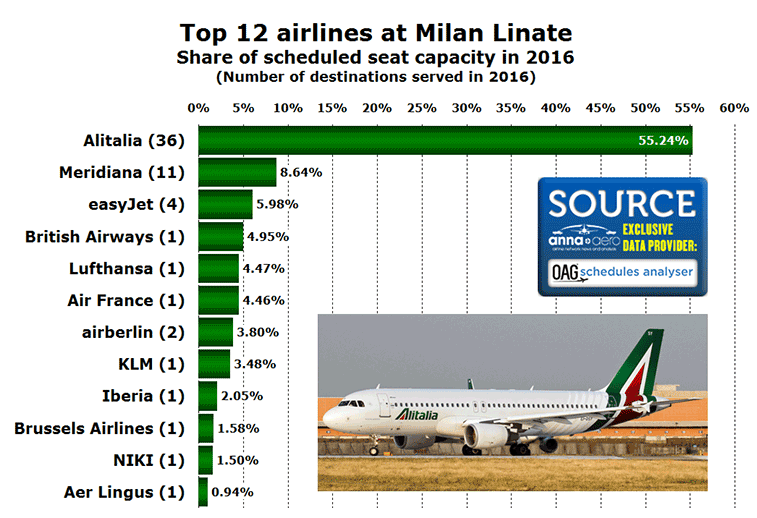 Rome is biggest route and only served by Alitalia at present

Analysis of OAG schedule data for last year confirms that the biggest route from Linate is to Rome Fiumicino with over 750,000 seats each way in 2016. Alitalia was the only carrier to serve the market last year. easyJet competed for customers between March 2013 and October 2015, while both Air One (now part of Alitalia) and Meridiana served the market in 2008 and 2009. The introduction of faster trains on the high-speed rail link between Milan and Rome appears to have been a factor in these latter two carriers withdrawing from the market. 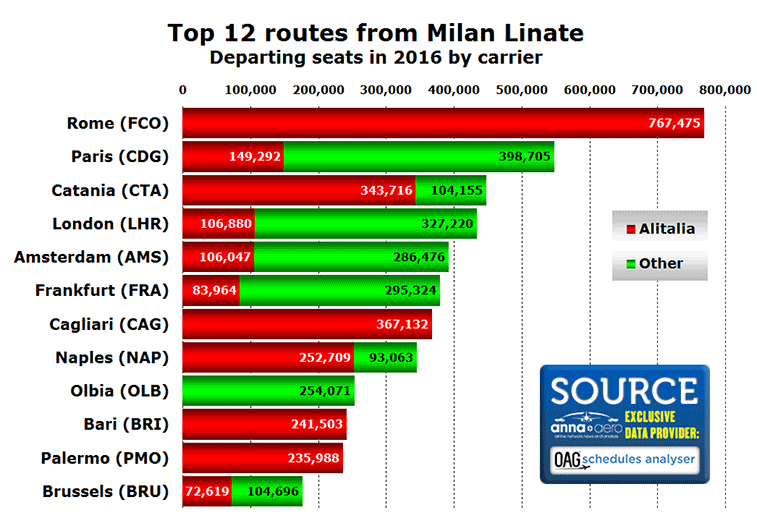 Alitalia has a monopoly on three more of the top 12 routes from Linate; to Bari, Cagliari and Palermo. However, on the five international routes in the top 12 (Amsterdam, Brussels, Frankfurt, London Heathrow and Paris CDG) Alitalia actually has the minority share of seat capacity. On two of these routes, Amsterdam and Paris CDG, Alitalia faces not just the national carrier at the other end of the route (KLM and Air France respectively), but also easyJet.

As fellow SkyTeam members, Air France, Alitalia and KLM had formed an alliance in 2009. Although the deal was terminated in May 2015 it does not expire until the end of this month, January 2017. Alitalia has indicated that it wants Air France and KLM to return its Linate slots, which helps explain why the Dutch and French carriers recently announced their intention to start multiple daily flights from their home bases to Milan Malpensa. How quickly they will give up their Linate slots and what Alitalia might do with them remains to be seen.

Alitalia’s network at Linate saw three destinations ditched since the summer of 2015. Routes to Ancona and Warsaw were terminated at the end of S15, while Bucharest services stopped at the end of June 2016. Of these, only Bucharest is served by another carrier, Romanian LCC Blue Air. According to OAG data, Alitalia will also be ending flights to Berlin Tegel from the end of this month, leaving airberlin as the sole carrier on the route.

The airport is currently restricted to a maximum of 18 movements per hour, though this does not include PSO (Public Service Obligation) routes to Sardinia (Alghero, Cagliari and Olbia), for which last July they were around 22 daily flights, equivalent to two more movements per hour. This explains why analysis of OAG schedule data for Monday 4 July 2016 (the first Monday in the airport’s busiest month) shows either 19 or 20 hourly scheduled movements in 12 of the 15 hours between 07:00 and 22:00. Clearly, while the movement limit remains, there is little scope for passenger numbers to grow significantly at the airport. 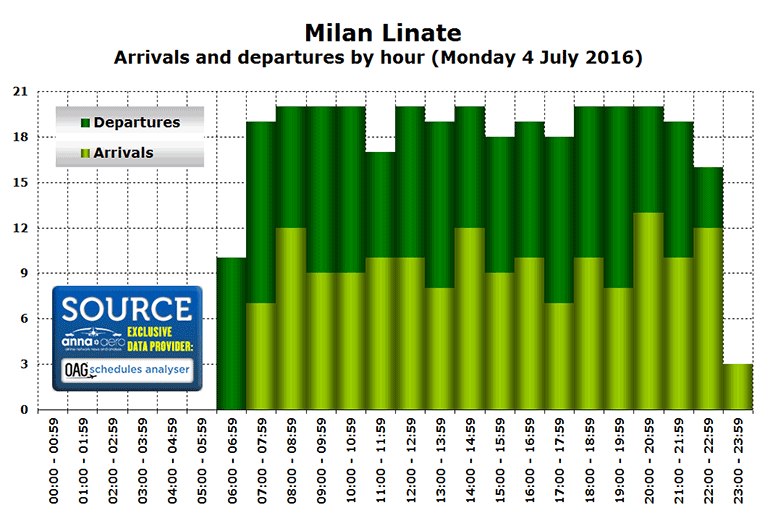 Milan Linate Airport is only a few kilometres from downtown Milan. The big lake to the north-east of the airport is Idroscalo, an artificial lake that was constructed in the late 1920s as a “runway” for seaplanes, and is now part of a public park. As yet the airport is not connected to the city’s metro system. A new line, M4, has been approved which will have the airport as its end point. Construction on the line has started but completion is not currently expected before 2022.