AirAsia X grows passenger numbers by 30% in 2016; now serves 11 countries from Kuala Lumpur base with 22 aircraft; US access granted 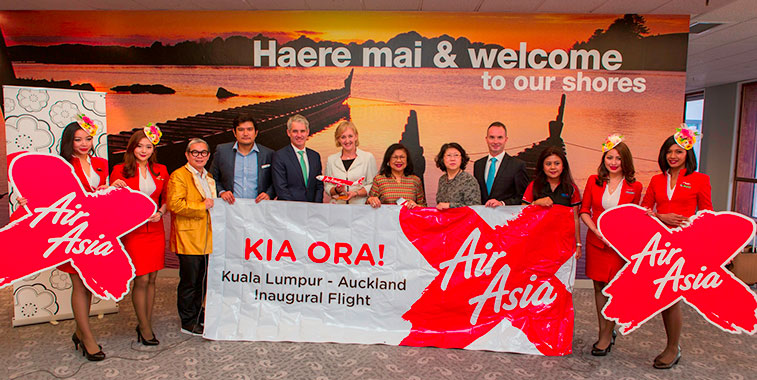 AirAsia X resumed service to New Zealand with the introduction on 22 March 2016 of flights from Kuala Lumpur to Auckland, with an intermediate stop at Gold Coast in Australia. Between April 2011 and May 2012 the LCLH carrier served Christchurch with non-stop flights.

The recent news that AirAsia X has gained permission to serve the US coincides with the carrier reporting record passenger numbers in 2016. The low-cost long-haul (LCLH) carrier will celebrate its tenth anniversary later this year (in November) and currently operates a fleet of 22 A330-300s from its home base in Kuala Lumpur. After shrinking in 2015 the airline grew its passenger numbers by 30% in 2016, to almost 4.7 million. The number of flights was up 21%, ASKs (Available Seat Kilometres) were up 25% as the average sector length increased 4% to 4,944 kilometres, and load factor improved by four percentage points from 75% to 79%. However, this is still below the 82% load factor achieved by the airline in 2014. 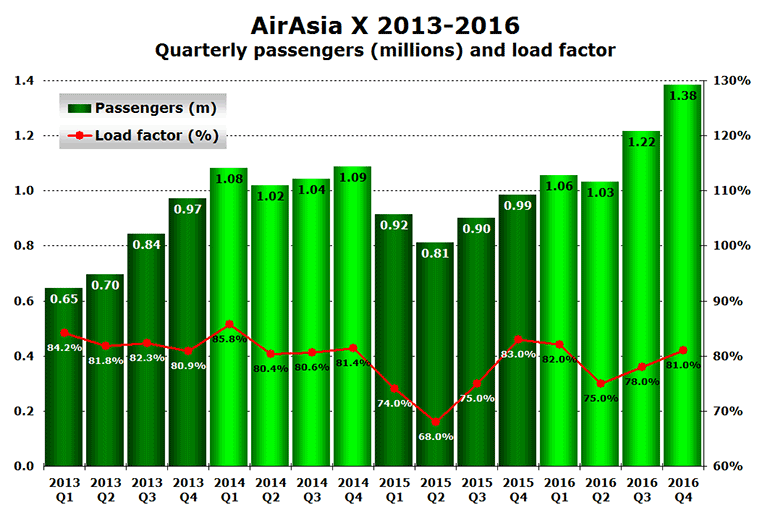 So what makes AirAsia X a low-cost carrier? Well, getting lots of seats into its fleet of A330-300s is one way of reducing the unit cost. The airline’s 22 aircraft all operate with a total of 377 seats, including 12 premium flatbed seats. Compare this with a basket of other carriers in Asia and Europe and it becomes clear how AirAsia X’s seat costs are kept low. Only Cebu Pacific Air has fitted more seats in the same type of aircraft. Even if all other costs were the same (which they are not), AirAsia X’s costs per seat would be 23% lower than those of local rival Malaysia Airlines, purely based on aircraft seating configuration. 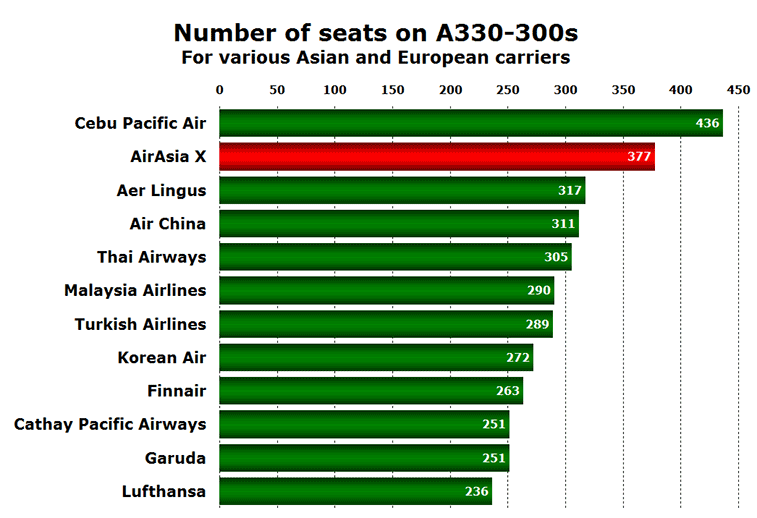 In the past the airline also flew two A340s, which enabled it to serve longer-haul markets such as London and Paris, but these were finally withdrawn from service during 2015. AirAsia X’s current longest non-stop services are to Sydney and Gold Coast in Australia which are between 6,500 and 6,600 kilometres. Its shortest sector, at just 3,043 kilometres, is to Chongqing, a route which was launched in September and which has previously been served by AirAsia since July 2015.

Australia is leading country market with almost 40% of ASKs

At present AirAsia X serves just 10 country markets non-stop from Kuala Lumpur, while New Zealand (Auckland) is served via Gold Coast in Australia. An analysis of OAG Schedules Analyser data for the last two years reveals that Australia is the leading country market, accounting for 38% of the airline’s ASKs from Kuala Lumpur. Apart from Sydney and Gold Coast, AirAsia X also serves Melbourne and Perth, as well as having served Adelaide in the past. 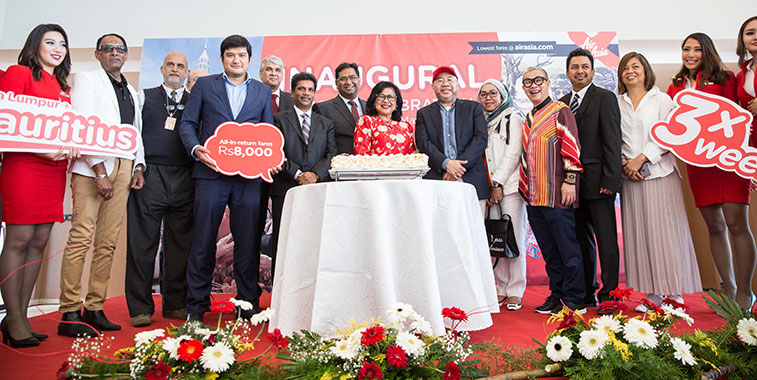 One totally new country market was added in 2016 (Mauritius) while flights to India and Iran resumed after a gap of several years. Sri Lanka was dropped from the airline’s network when service to Colombo ended in October 2015. This route was once again taken up by AirAsia which had previously served the market before AirAsia X launched the route in September 2013. 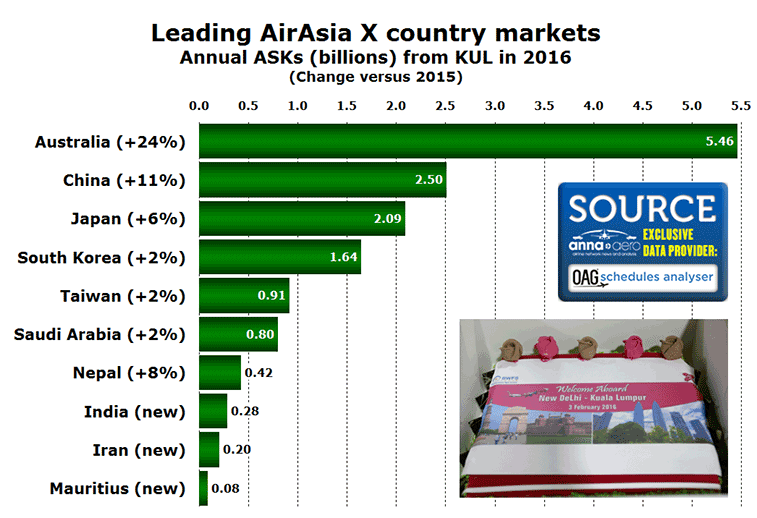 Early indications are that the airline’s first route to the US might be Honolulu in Hawaii. With a sector length of 10,962 kilometres this would be not far off the 11,750-kilometre maximum range of the aircraft, according to Airbus data. To reach California non-stop would require an aircraft with a range of well over 13,000 kilometres so maybe AirAsia X plans to offer one-stop, same aircraft flights via Hawaii.

Being a pioneer in the LCLH market has meant a certain amount of trial and error when it came to route planning. As a result the airline has started and then pulled off a relatively high number of routes for a long-haul carrier.

Delhi services resumed on 3 February 2016 while Tehran flights returned to the airline’s network on 21 June 2016. Looking ahead, the next new destination for the carrier is set to be Wuhan in China. Four times weekly flights are scheduled to begin on 22 March. 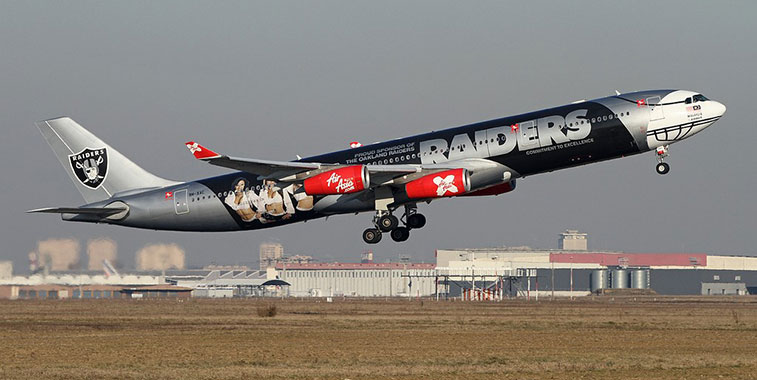 AirAsia X may not have served the US market just yet, but back in 2009 it painted one of its two A340s in this striking Oakland Raiders colour scheme as part of a special promotion. For those who don’t know they are a US football team who won 12 of their 16 matches in the most recent NFL season. Oakland already welcomes one low-cost long-haul airline (Norwegian from Scandinavia, Spain and the UK) but a non-stop service from Kuala Lumpur, at over 13,500 kilometres, is currently beyond the capabilities of AirAsia X’s A330-300 fleet.