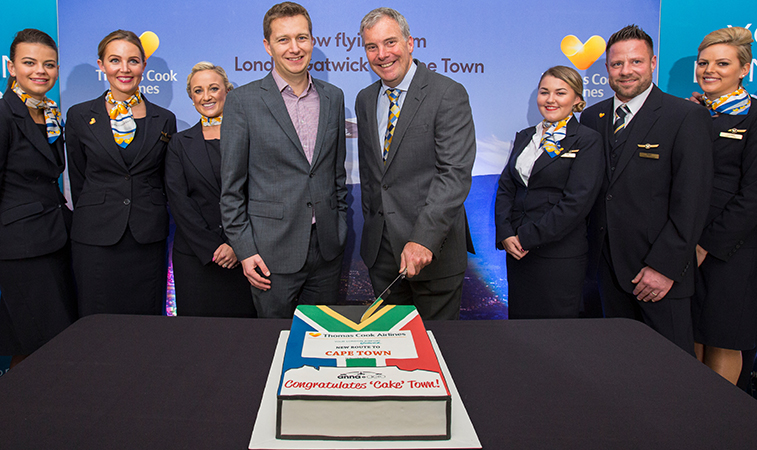 Cutting the anna.aero-commissioned cake for Thomas Cook Airlines’ new route to Cape Town from London Gatwick on 15 December are Stephen King, Gatwick’s Head of Airline Relations and James Burrows, Thomas Cook’s Director of Aviation. Cape Town traffic is up 7.1% in 2016, with it accounting for nearly 26% of South African passengers last year.

South Africa welcomed over 39.7 million passengers through its top airports in 2016. In 2013 the same airports welcomed five million fewer passengers. According to Statistics South Africa, 8.9 million foreign visitors came to South Africa in 2015. However, this dropped 6.3% when compared to the 9.5 million that came in 2014. Looking over statistics for the first 11 months of last year, the average month-on-month increase in international tourists to South Africa is 18%, highlighting that the market is growing again.

Having accomplished an almost 19% increase in traffic over the past 12 months, East London has claimed the title of being the fastest growing airport in South Africa for 2016. The airport welcomed over 806,000 passengers last year, beating the 679,000 that passed through East London in 2015. The second best performing airport for growth last year was Kimberley, with its traffic growing by 11%. Overall the top airports of South Africa witnessed nearly 39.7 million passengers in 2016, up 5.3% on the year before. 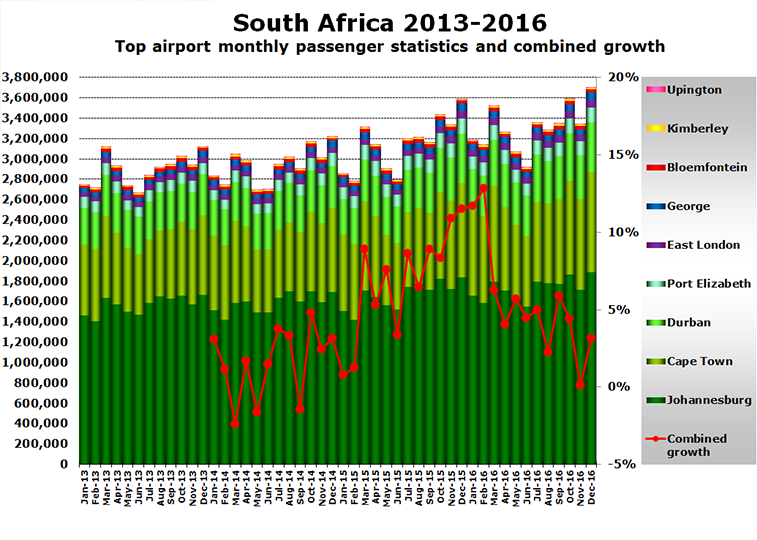 Since 2013 traffic at Johannesburg has grown by over 10%, with the airport passing the 20-million barrier last year. However, Cape Town, which has now passed 10 million annual passengers, has gained on the largest airport by seeing its traffic increase by 21% during the same four-year period. Along with Johannesburg and Cape Town, Durban (+15%), Port Elizabeth (+25%), East London (23%), George (+30%) and Kimberley (+18%) have also registered double-digit growth in the same time.

Although East London was South Africa’s best airport for traffic growth in 2016, when looking at the past few years, it is George which is reporting the best month-on-month developments. In 2012 George welcomed over 560,000 passengers, while last year it saw 727,000. That means in the past four years traffic from George has grown by nearly 30%, with the airport registering an average month-on-month increase of 9.4% over the past 36 months. 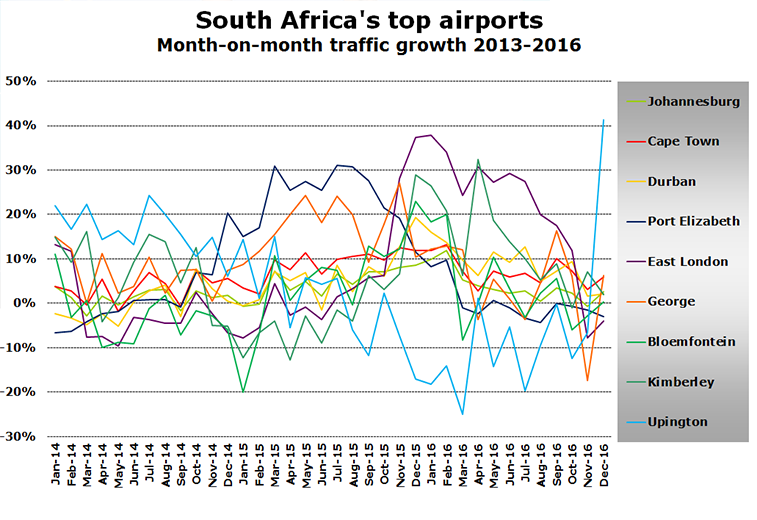 Having witnessed a growth in seat capacity of 7.1% over the past 12 months, South Africa’s domestic market remains its number one sector. The domestic market passed the 70% market share level last year, the first time it has done so since 2009. After South Africa, the UAE is the nation’s largest international market (3.7% of seat capacity), with it having overtaken the UK back in 2012. 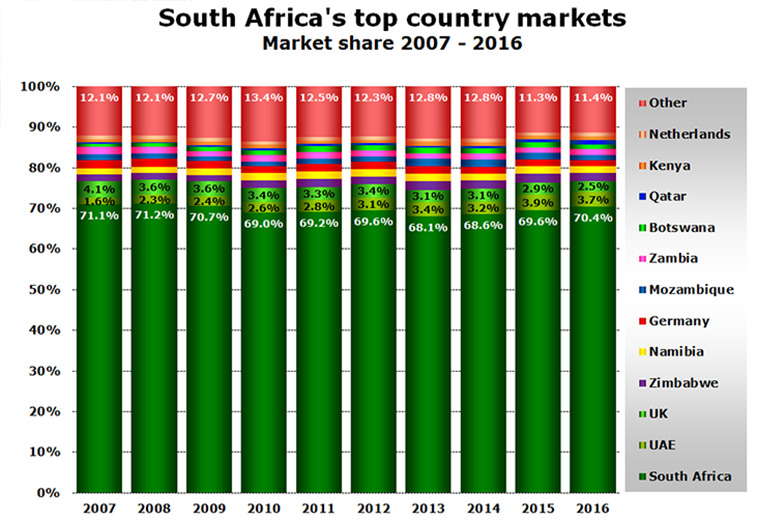 Since 2007 international seat capacity to South Africa has grown by 28%, despite the number of non-stop markets dropping, with the country last year registering over 8.6 million one-way non-South African seats. The average year-on-year increase in seats in the international market during the past decade is 2.9%. 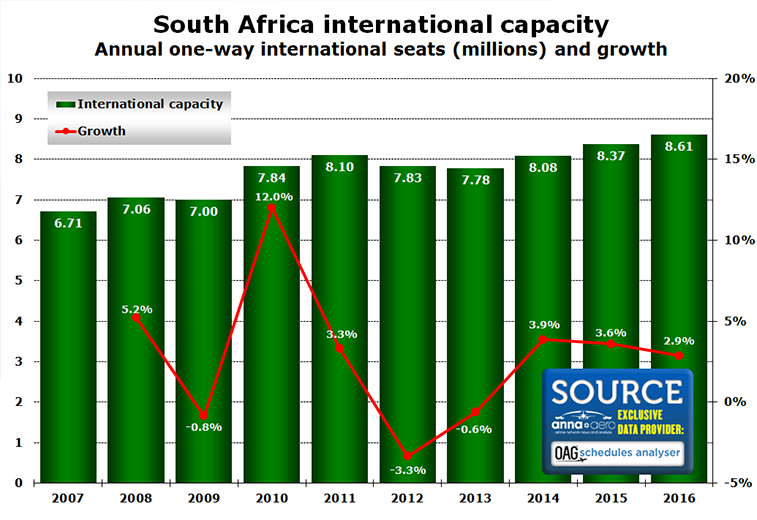 The leading international market is the UAE, which has seen its seat capacity grow by 15% since 2007. It is also the only international nation which has over one million one-way seats from South Africa. Although it sits in second place, the UK market has seen developments during the past few years. British Airways introduced the A380 onto its route between London Heathrow and Johannesburg, as well as it and Thomas Cook Airlines launching flights from London Gatwick to Cape Town during the past few months. The country pairing of UK-South Africa will develop further in 2018 when Thomas Cook links Manchester to Cape Town.

While these three markets have been dropped, South Africa has welcomed Spain back to its connections board. On 2 August last year Iberia linked Madrid to Johannesburg, the first link between the two nations that has operated since 2012. 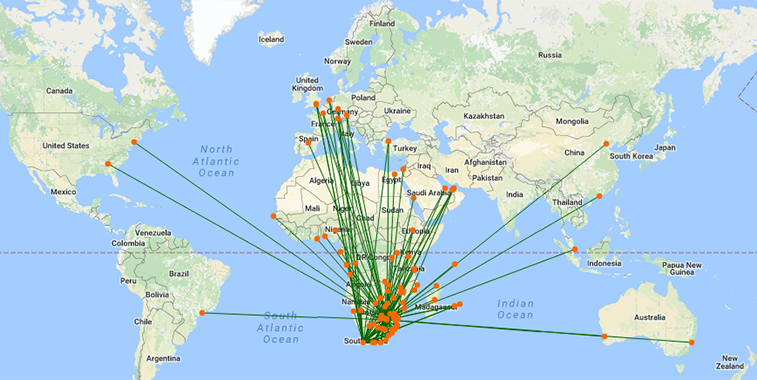 South Africa route map January 2017. Since 2015 routes to India, Argentina and Thailand have been lost, while last year welcomed the return of Spain to the nation’s connections board after a four-year hiatus. Overall South Africa is connected to 43 country markets, down from 52 in 2007.