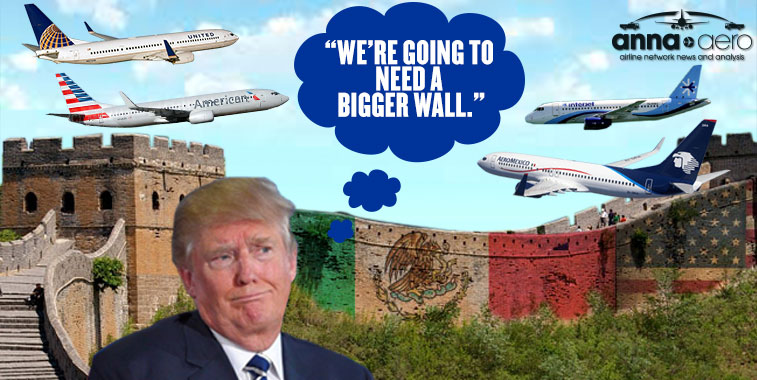 Trump: “We’re going to need a bigger wall.” The US President Donald Trump is pushing forward with plans to build a 3,100-kilometre wall on the US-Mexico border, with one of the main reasons being to control immigration on the land crossing. However it seems that traffic between the two markets is booming when it comes to aviation, with 9.2 million more passengers flying between the two nations last year when compared to 2010.

A lot is happening in the world of current affairs between the US and Mexico. One of the major talking points of course is US President Donald Trump’s view on illegal immigration from Mexico into the US, with him this week signing a document to proceed with the building of a 3,100-kilometre wall on the US-Mexico border. Despite the President’s insistence on having a wall, it would seem that air traffic between the two nations is booming, with the market welcoming over 27 million passengers in 2016. Therefore, President Trump’s motion to build an “impenetrable, physical, tall, powerful, beautiful, southern border wall” between the US and Mexico maybe unnecessary.

The last time that anna.aero looked at the US-Mexico market, a focus on the leading routes and airports was taken. This time an outlook on capacity growth and passenger traffic has been analysed, with the migration of people being the main focus of current affairs between the two nations.

In 2007 there was around 27.2 million seats on offer between the US and Mexico. Fast forward to today and the market now has 34.6 million seats. This represents an increase in capacity between the two markets of 27%. The last year to record a decline in the market was 2009, when seat capacity fell by 9.2%. 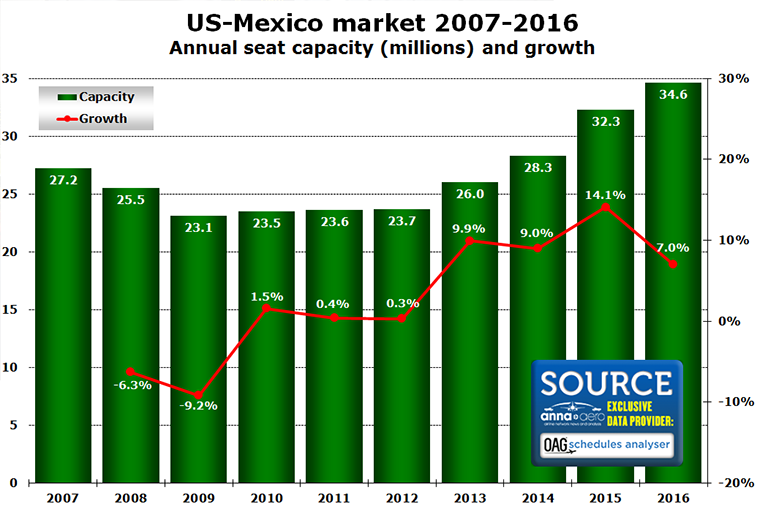 The average year-on-year growth in the market is 3.0%. Although the country pairing has been growing since 2010, the level at which it has been climbing has accelerated during the past few years, with 2013, 2014, 2015 and 2016 showing seat capacity gains of over 7.0%. Taking these four years into account, it sees the average year-on-year increase climb from 3.0% for the decade to 10% over the past four years.

Last year just over 27 million people flew between the US and Mexico according to statistics published by DGAC (Dirección General de Aeronáutica Civil) Mexico. This is up 7.2% on the total traffic figure of 2015. The growth in traffic on the US-Mexico country pairing is marginally outpacing the rate of capacity growth, which increased by only 7.0% last year. However with the average load factor for 2016 being a little over 78%, there is still plenty of spare seats to be filled by airlines. 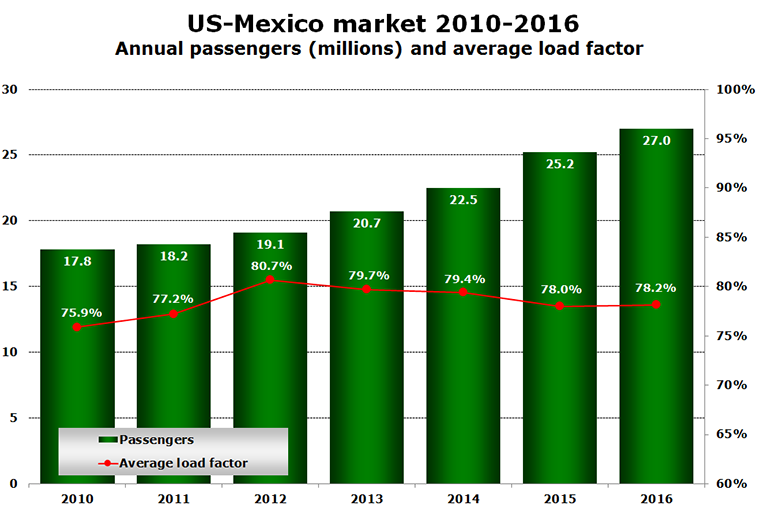 Although the average load factor on flights between the US and Mexico has climbed 2.3% since 2010, the country market witnessed a peak average of just under 81% in 2012, with 2016’s average load factor being 2.5% less. Overall traffic between the US and Mexico has risen by nearly 52% since 2010, which is more than 9.2 million additional passengers.

American Airlines is the leading carrier in the US-Mexico market, with it controlling nearly 22% of all seats in 2016. However, its majority share has dropped from the 24% it recorded in 2015 (includes combined data with US Airways). Along with American, one other carrier (highlighted in light green) in the top 12 is reporting a drop in capacity. Frontier Airlines’ seat availability between the US and Mexico has been culled by 8.3%. The top 12 airlines between the two markets fly just under 99% of all seats, up 0.5% from 2015. The leading carrier for growth between the two nations last year was Interjet, with its capacity increasing by nearly 57%. So with passengers and capacity growing consistently between the two markets, it seems that Trump’s wall maybe unnecessary. 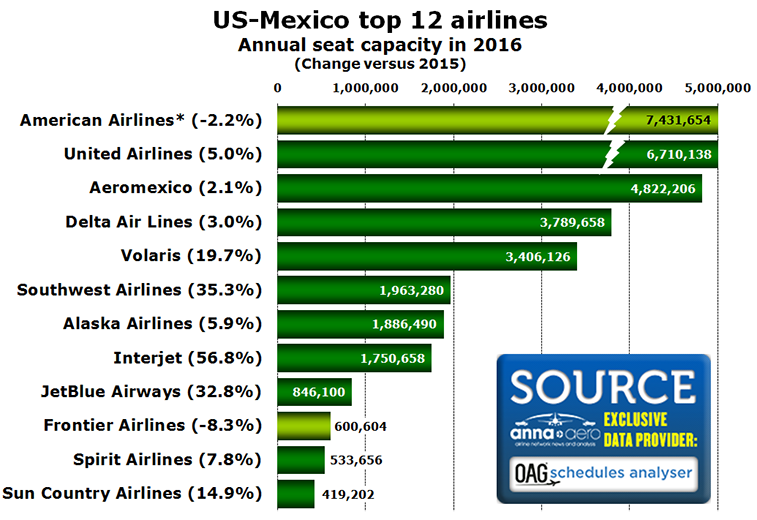 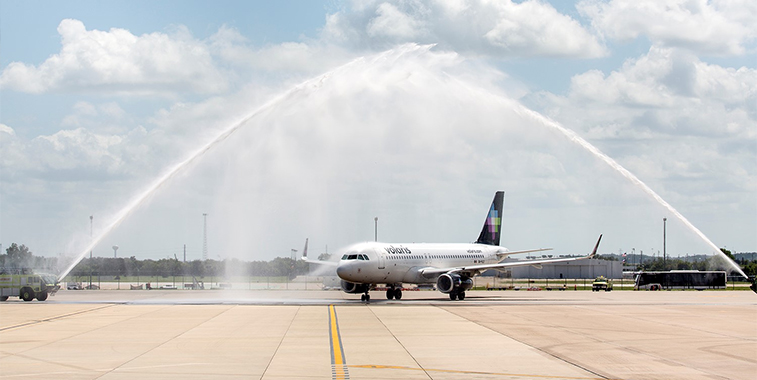 On 7 August, Volaris commenced its 22nd US route from Guadalajara to Austin-Bergstrom, one of many routes to open between Mexico and the US in 2016. The LCC’s seat capacity in the market grew by nearly 20% during the past 12 months. Total passenger traffic between the two nations climbed 7.2% to just over 27 million passengers in 2016.